CRAB FEAST ON THE FOURTH OF JULY 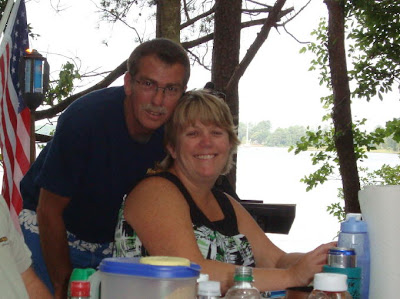 Fellow Pickleball Players, Tim and Julie, invited a group of us to their new site (*) for a crab feast on the Fourth of July. Well, it was not only crabs – there was a lot of everything else!! DELICIOUS!!! 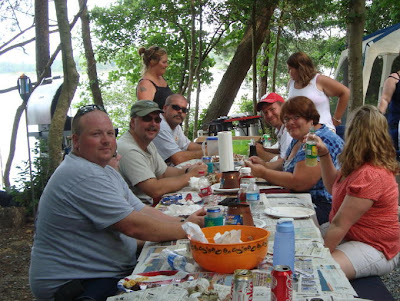 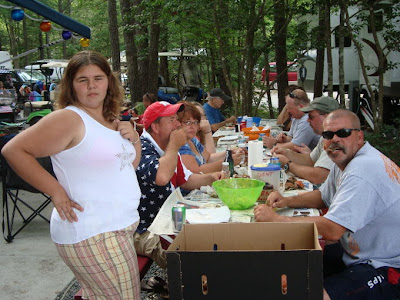 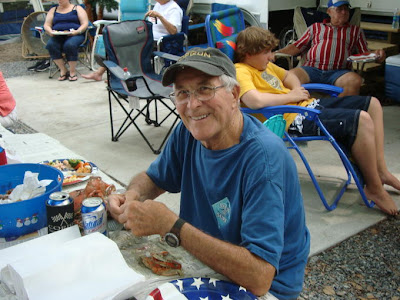 Here is Tim with his mother. (Keith got in the act, too.) She is known as “Mama” to everybody at the campground. Everyone, that is, except Ken, who says she is too young for her to be HIS Mama!! 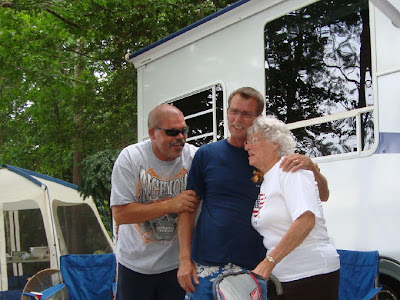 (*) New Site: This year for the first time, the TT Chesapeake Bay leases “annual sites” under a three-year contract. Under the new policy, they no longer offer “seasonal” or “lease by the week or month” sites. Tim and Julie lease this beautiful site, located on the bank of the Piankatank River. It is indeed one of the prime sites.
Posted by Highway Runner at 12:33 AM No comments:

DINING OUT AT CHEF TODD’S

A group of us went to Chef Todd’s for a delicious dinner. Chef Todd’s was previously located across the corner in an old 50’s style drug store, complete with soda fountain, etc. They soon out grew the location and moved to its current location on Main Street in Matthews. 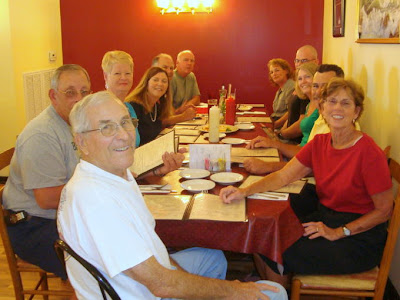 For some reason, our waitress seemed to be ignoring Wayne (next to me) and couldn’t get his order straight. Finally Judy asked the waitress if Wayne was not supposed to get applesauce with his meal. Wayne said he was not going to ask her for anything else. Apparently, she could not see him because he was wearing a yellow shirt and sitting in front of a yellow wall. He teased that next time he was going to wear a red shirt and he was NOT going to sit in front of that red wall!!

I wish I had my camera going because at the end of the meal the waitress brought Wayne a humongous piece of chocolate torte covered with whipped cream and forks to share with everyone!! It was a most enjoyable evening!!
Posted by Highway Runner at 12:09 AM No comments:

July 3 – TT Chesapeake Bay sponsored a Decorated Golf Cart Competition and Parade on Friday afternoon. There must have been 20 – 25 golf carts and bicycles participating. Ken served as one of the judges!! It was really difficult choosing the winners, there were so many extravagantly decorated carts!!

Here are some of the participants. 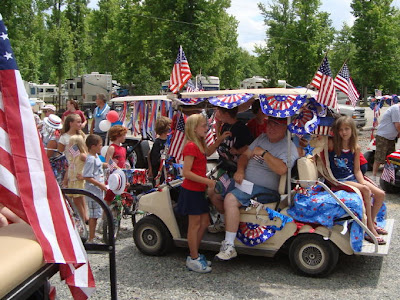 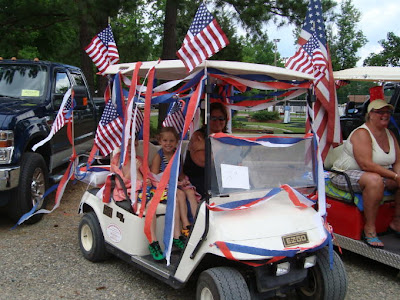 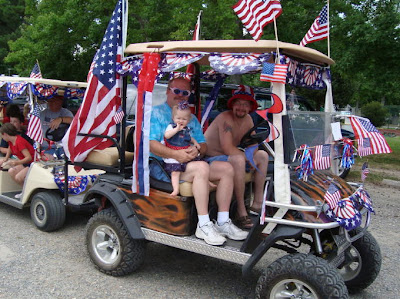 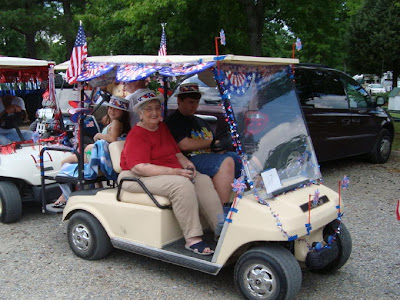 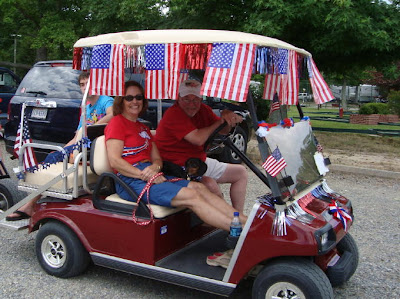 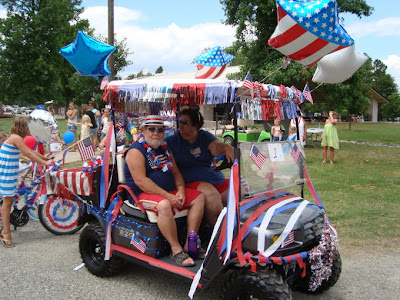 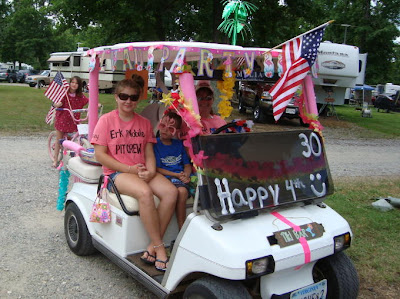 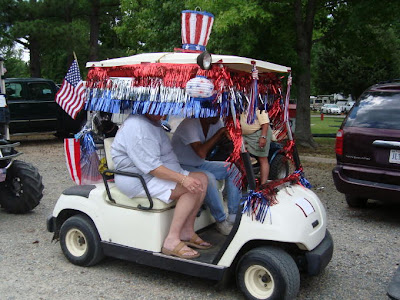 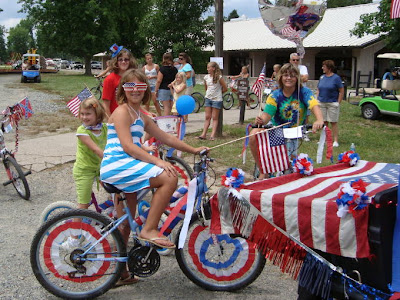 Bicycles. We didn’t get a picture of the bike winner, but the bike looked very much like this PLUS four big red, white and blue balloons on the handlebars. 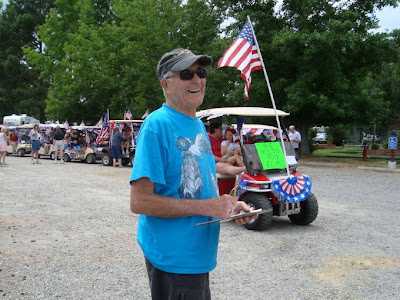 Ken is having too much fun being a judge!! 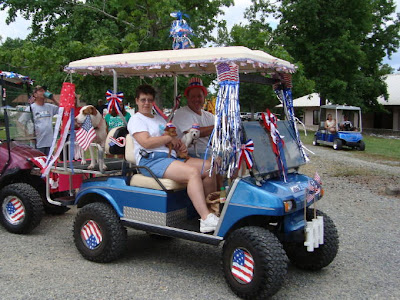 Gilbert who is always challenging Ken to an unfriendly game of Pickleball and Jenny who compares knee replacement surgery with Ken. 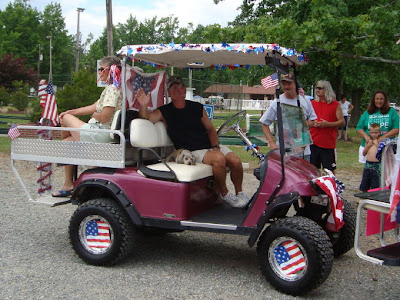 Ru our Assistant Manager. The sign, “WE MISS YOU, ELMO” is in memory of Elmo who was a fireman killed last year in a motorcycle accident on I-64. His golf cart was a winner in last year’s parade. Elmo was a Pickleball player. In fact, he was in the process of having Pickleball courts put in at his local recreation center at the time of his death. 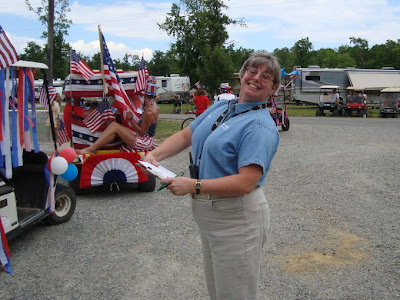 Judge Terry is our Manager here at TT Chesapeake Bay. Judging must be a FUN job!! 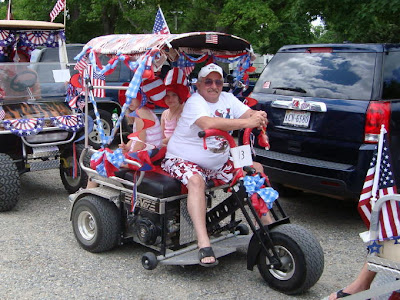 A golf cart of a different kind!! 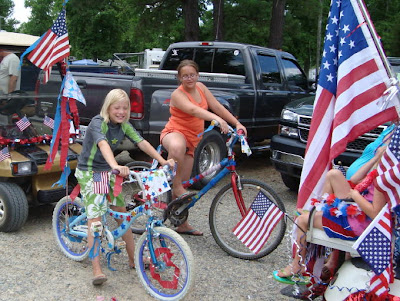 Tabatha is the daughter of our good Pickleball friends, Amy and Tom. She is the cutest thing. 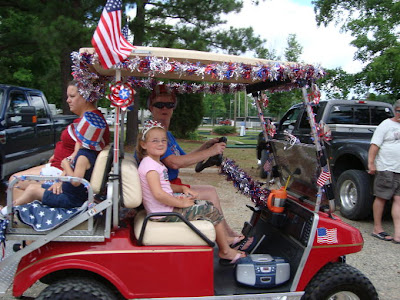 Our friend Judy and her grandkids did a great decorating job. And look at that "little Princess" 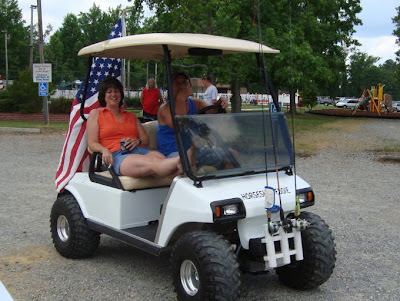 Melissa and Eddie bring up the rear of the parade. 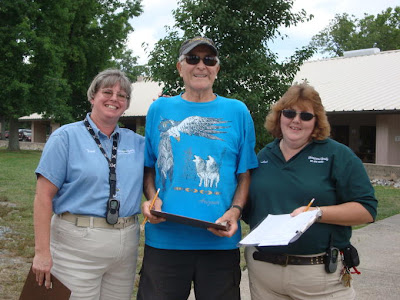 These are your JUDGES!! Terry, Ken, and Lisa. 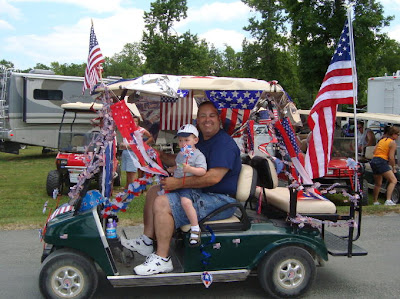 COOK OUT AT MIKE AND DIANE’S

Friday afternoon before the Fourth, we got together with Mike and Diane for a cook out. Everyone brought their own entre and a side. Mike prepared it all on the grill. He was very proud that he was able to prepare steak, two kinds of shrimp chicken strips all at the same time on the grill, and have them finished at the same time. He’s thinking he should become a chef!! We think so too!!! Good Job, Mike!! 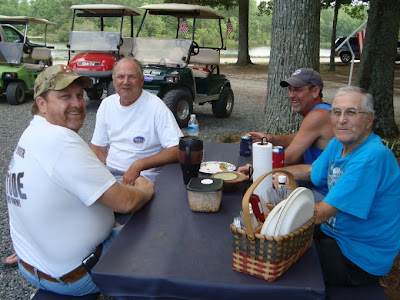 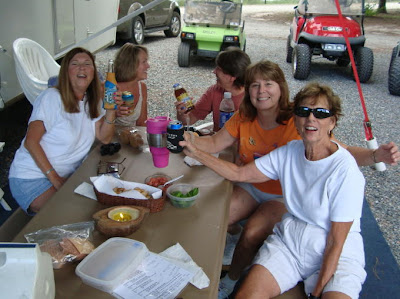 Posted by Highway Runner at 11:18 PM No comments:

Friends, Theresa and John, came back to Chesapeake Bay for a couple of nights. They were “seasonal” campers until this season when they left the Park. They rented a cabin while they were here. We were very surprised when they brought us two large crab cakes and fish fillets for our dinner one evening – actually, it was enough for two dinners!! Thank you guys for a delicious dinner!! 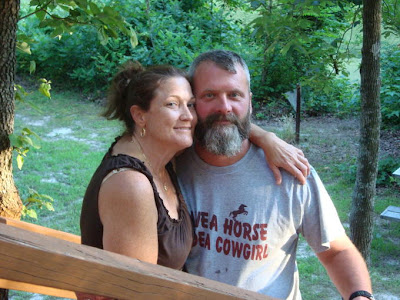 One of their last experiences when they leased a site at the campground last year was a limb fell off a nearby tree and totaled their car!! We took pictures to support their insurance claim! 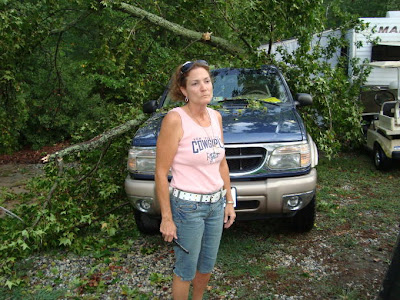 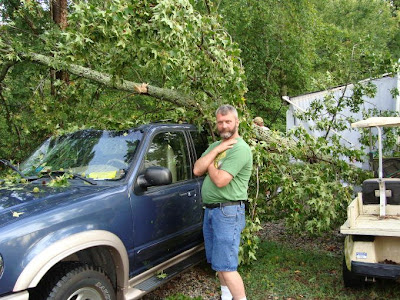 Posted by Highway Runner at 11:06 PM No comments: