SEP 09 - THE FOLLOWING FOUR ARTICLES TOOK PLACE THIS PAST WINTER WHILE WE WERE IN FLORIDA.  THE FOUR ARTICLES ARE POSTED IN THE ORDER THEY OCCURRED, BEGINNING AT THE END OF MARCH.  SORRY IT TOOK ME SO LONG TO GET AROUND TO POSTING.  HOPE IT IS NOT TOO CONFUSING THAT I WENT BACK IN TIME.

Posted by Highway Runner at 11:40 PM No comments:

FAYE ENDS UP IN THE HOSPITAL IN WAUCHULA, FL!

Our last posting carried us through the 4th of March and indicated that we had been out of commission for one reason or another.  That article ended with this statement:

Hopefully, next week both Ken and I will be fully recovered and can go out and PLAY AGAIN!!!

Well, I'm here to tell you, it did not turn out that way!!

I guess this picture will explain why we have not been on the Blog for quite some time!!  I ended up in the hospital in Wauchula, FL for ten days (March 31 - April 10) with PNEUMONIA!

Ken took this picture of me in the hospital bed!  Unknown to me!!  Looking pretty bad!! 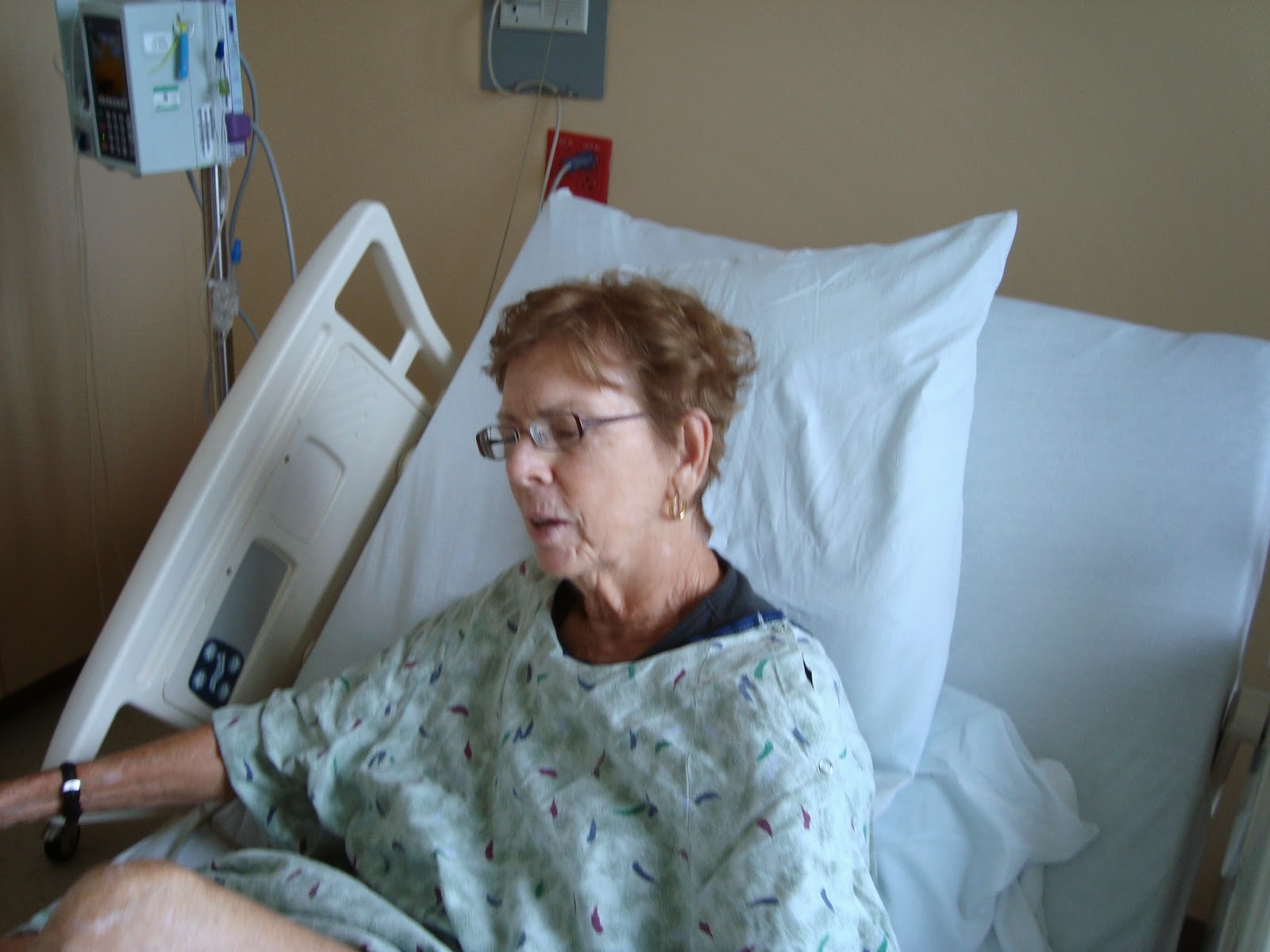 Ken and I both had been feeling poorly for awhile --  a lot of coughing, no energy.  Then I developed aches and pains.  Thought I had the flu.  Finally Ken insisted that I go to the Emergency Room at the Hospital in Wauchula.  They immediately did chest X-Rays, contrast MRI, blood tests, etc. All of these tests told them I had Pneumonia!  I have had Pneumonia before, but this time they said I would have to be admitted to the Hospital!

Later, when I met Dr. Kathy Lee, a really nice Asian doctor, she said in her Asian accent:  "You have really bad Pneumonia.  Really bad Pneumonia!!  You have Pneumonia in both lungs!   I will have to treat you for TEN days!!"

Wait a minute!!  Did you say I have to stay here for TEN days!!  YES!!  What could I do??  I settled in for ten days in the hospital.  But things were not too bad!

That afternoon, Ken brought me a beautiful potted plant. 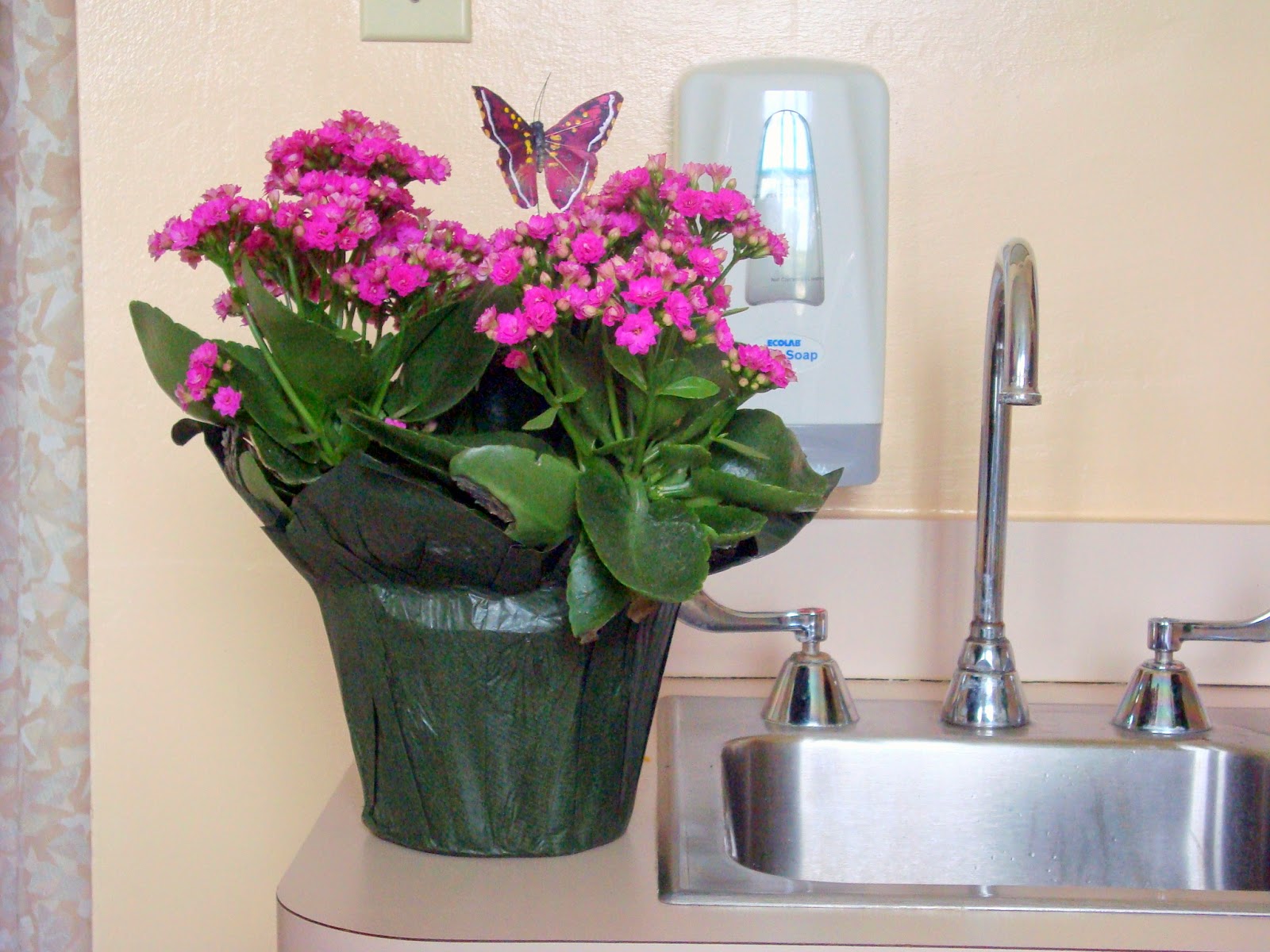 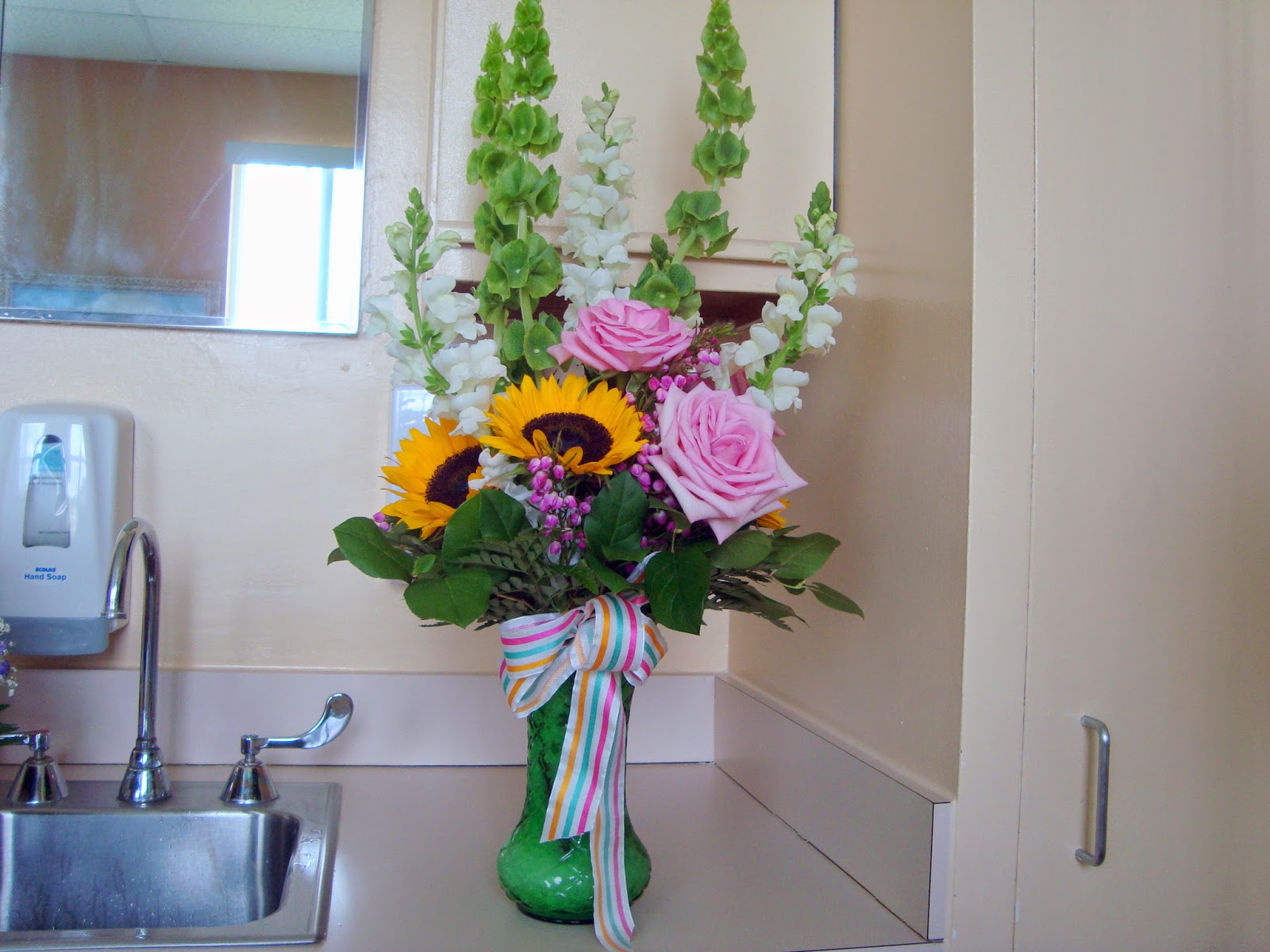 And my daughter Stasia and son Barry sent flowers the day after that ! 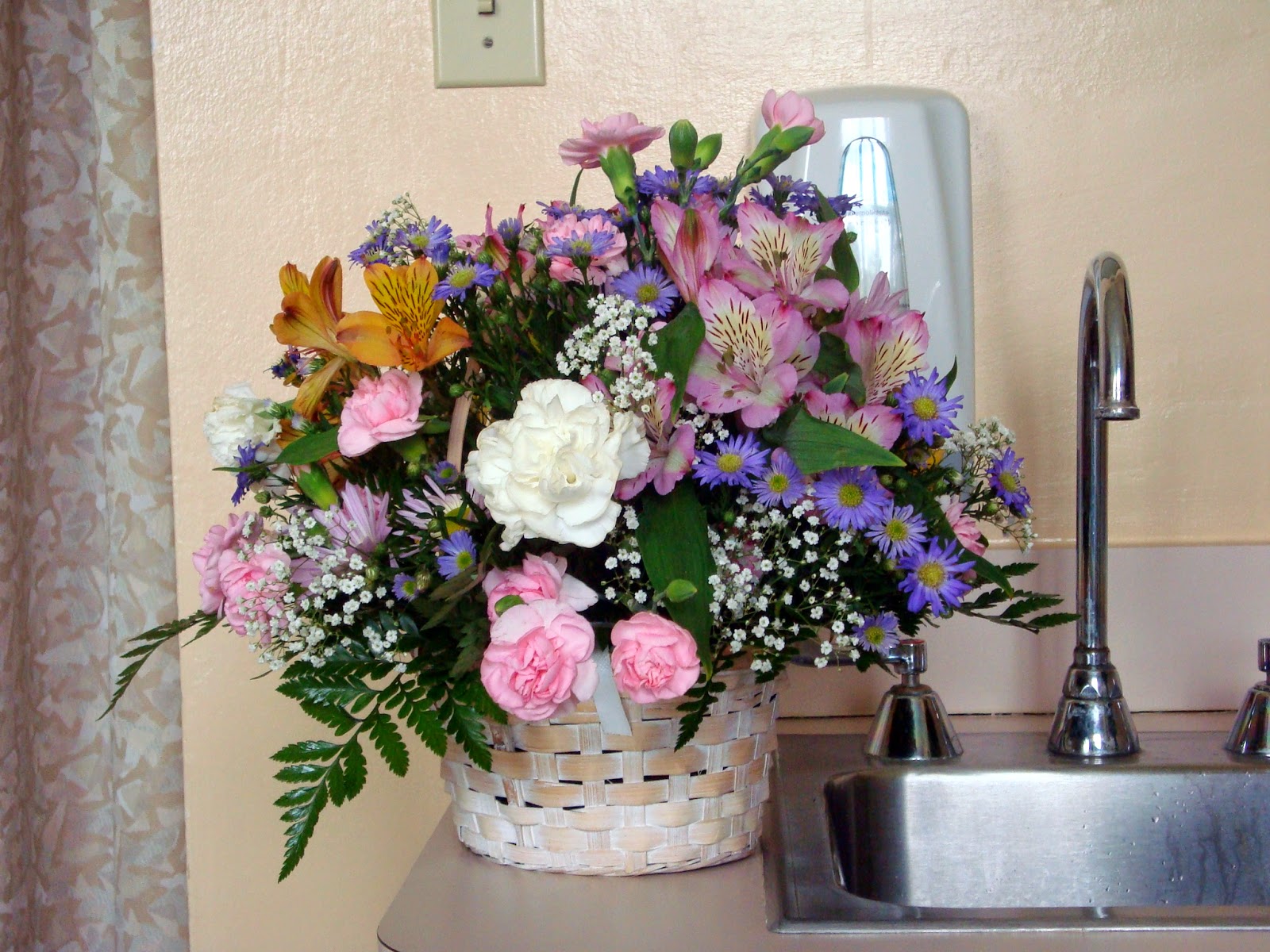 All of the beautiful flowers brightened my days and the staff enjoyed them as much as I did!  In fact, I left them for the staff when I checked out.  They were still beautiful.  THANKS ALL OF YOU!!

The staff took good care of me.  The food was delicious, too!  This is my lunch salad one day! 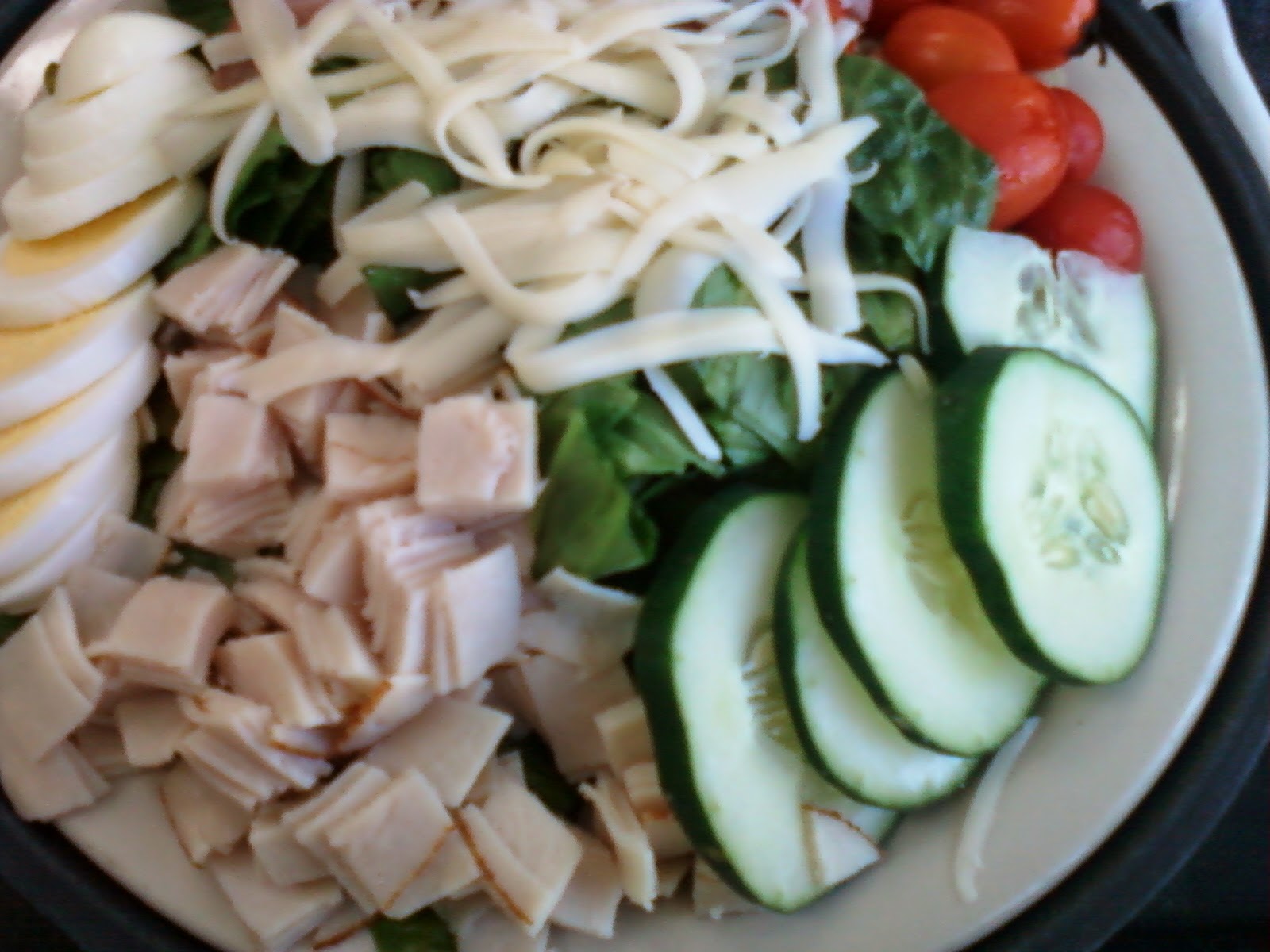 For four days I was on IV for fluid 24/7 and antibiotics every six hours.  And for those four days I guess I was pretty sick.  The doctor said after four days I would be transferred to Rehabilitation.

Transferring to Rehab was something I had difficulty wrapping my head around!  First, they removed the IV for fluid, so I only had to have IV for the antibiotics every six hours.  Then, still in bed, I signed some papers discharging me from the Hospital.  Another set of signed documents transferred me into Rehabilitation!!   It seems Wauchula Hospital has a Swing Program whereby they can "swing" you over to Rehab!  Same room, same bed, same doctor, but now I was in Rehab!  It was all a matter of paperwork changing the way Medicare would be billed.  In other hospitals I would probably have to go to an entirely different facility!  Lucky me for Wauchula's Swing Program.  I just stayed where I was.

I was able to move around at will.  Therapists took me to physical therapy to build up my strength two times a day.  I could check myself out for a few hours to have dinner with Ken, so I did that a couple of times.

I had planned to go with friends Lois and Gene to see "The Story of Noah" at the Cattleman's Arena in Wauchula on Friday, April 4.  Instead, they came to visit me in the Hospital on their way to the play.  They brought a beautiful fruit basket but unfortunately I lost the pictures of their visit.  One of my therapists said the husband of her best friend had written the play, The Story of Noah, and composed the music!  Small world!!

I finally got out of the Hospital on April 10 and am slowly recovering.  Thanks to all of our friends and family who helped us through!

Sidebar:  It is now September and I still have residue of Pneumonia in my lungs.  The doctors are not planning any additional treatment.  Guess I'll have to live with it unless it heals itself!
Posted by Highway Runner at 11:06 PM No comments:

March 25 - Back in February, on Ken's first visit to Podiatrist Dr. Jones, she pointed out that he had fungus under the nails of both big toes.  In fact, she said he did not have any nail left on those toes.  It was all fungus buildup!  She said if left unattended, the fungus to go into his foot, into the bone, up his leg.  It could result in having his foot amputated!!!  Ken should let her remove the fungus from both big toes.

Because of Medicare guidelines, surgery could not be performed on both toes at the same time.  Ken's first appointment was on March 12. 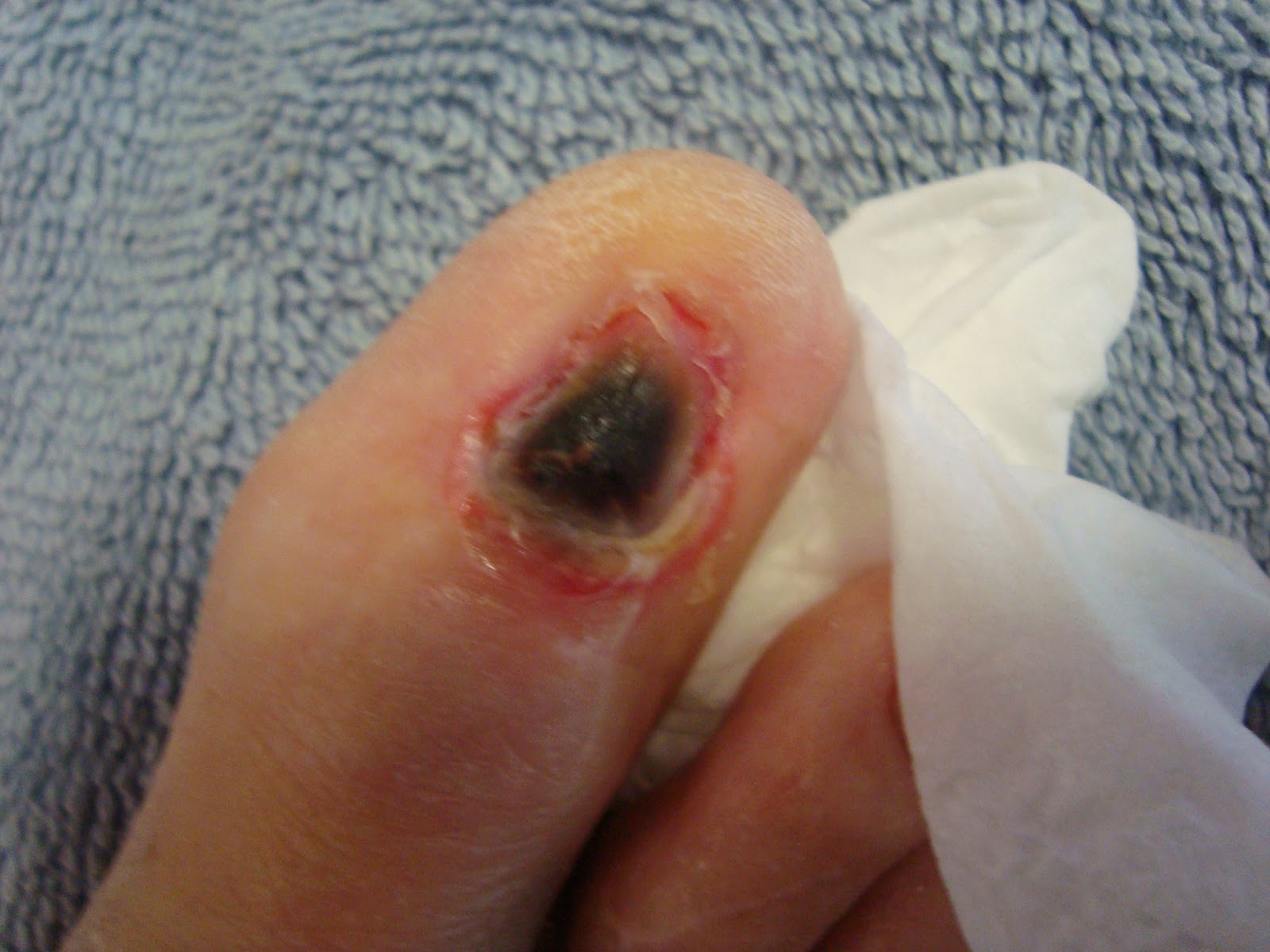 At home we had to treat the toe with Epsom Salts bath, drops, band aid on and off to protect the nail and then allow the nail to dry.

Dr. Jones removed the fungus from Ken's right big toe two weeks later, on March 25.  I was still in the hospital while Ken was recovering from this surgery.  He had to manage the treatment of Epsom Salts bath, drops, band aid on and off all by himself!!  He did a great job!

Recovery is going slowly and he has not been able to wear tennis shoes yet (June 1) to play Pickleball.
Posted by Highway Runner at 11:06 PM No comments:

VISIT WITH TRACY AND VICKIE

April 26 - We had received a call from Ken's oldest daughter, Vickie, telling us that she was coming to the Orlando area to visit her sister Tracy in Stratford.  We of course made plans to spend some time with them.

You may recall, Tracy lives with her friends Chuck and David in Chuck's log "cabin" in the middle of a ranch. 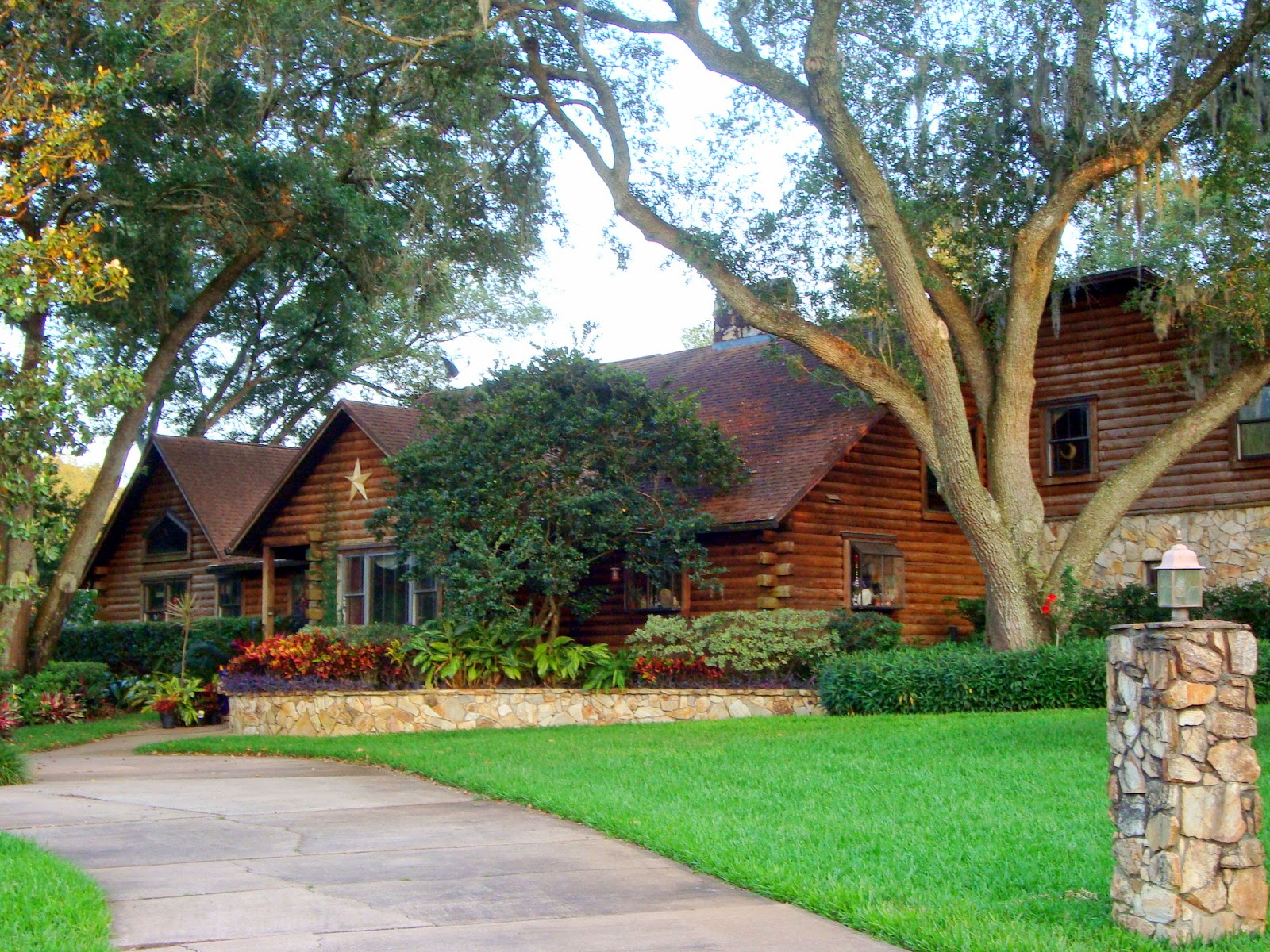 It is the home of Royalty Pups.  Here are some of the newborn pups! 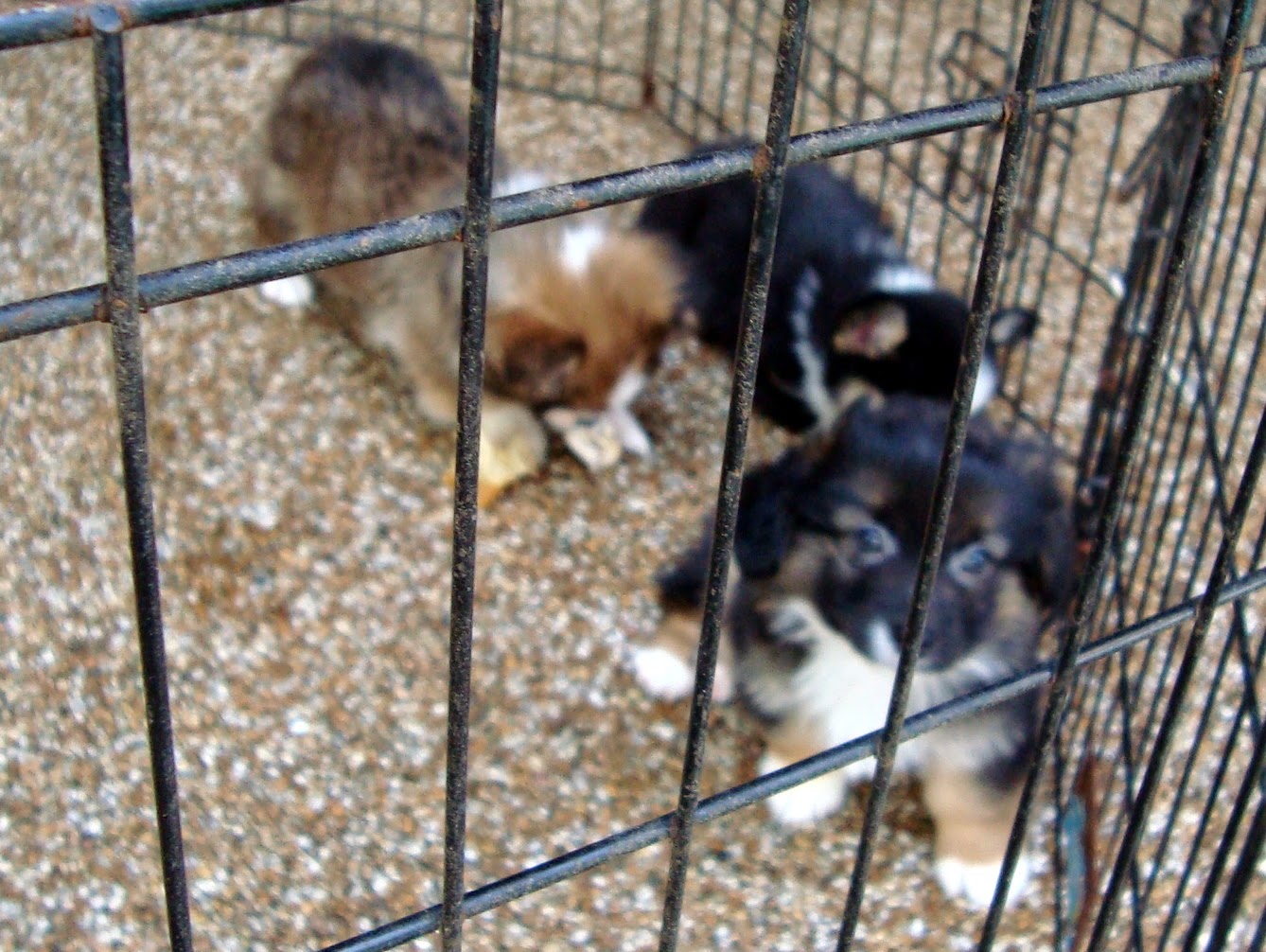 We gathered by the side of the pool.  The two of us in the middle.  Tracy on the left; Vickie on the right. 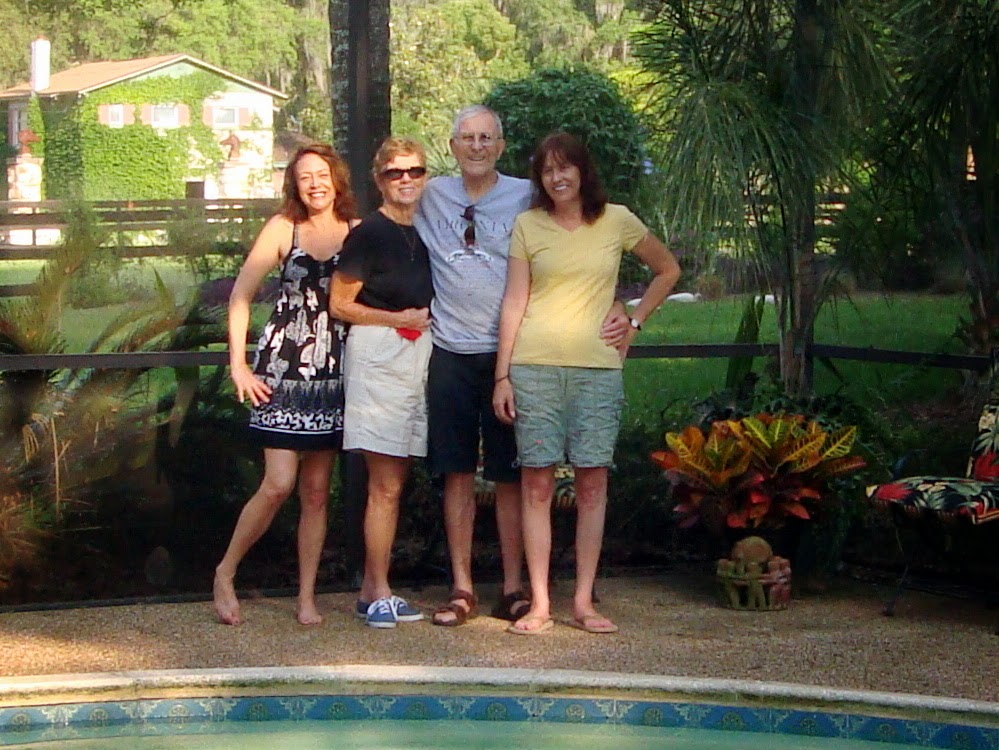 Tracy and Vickie with Chuck and David. 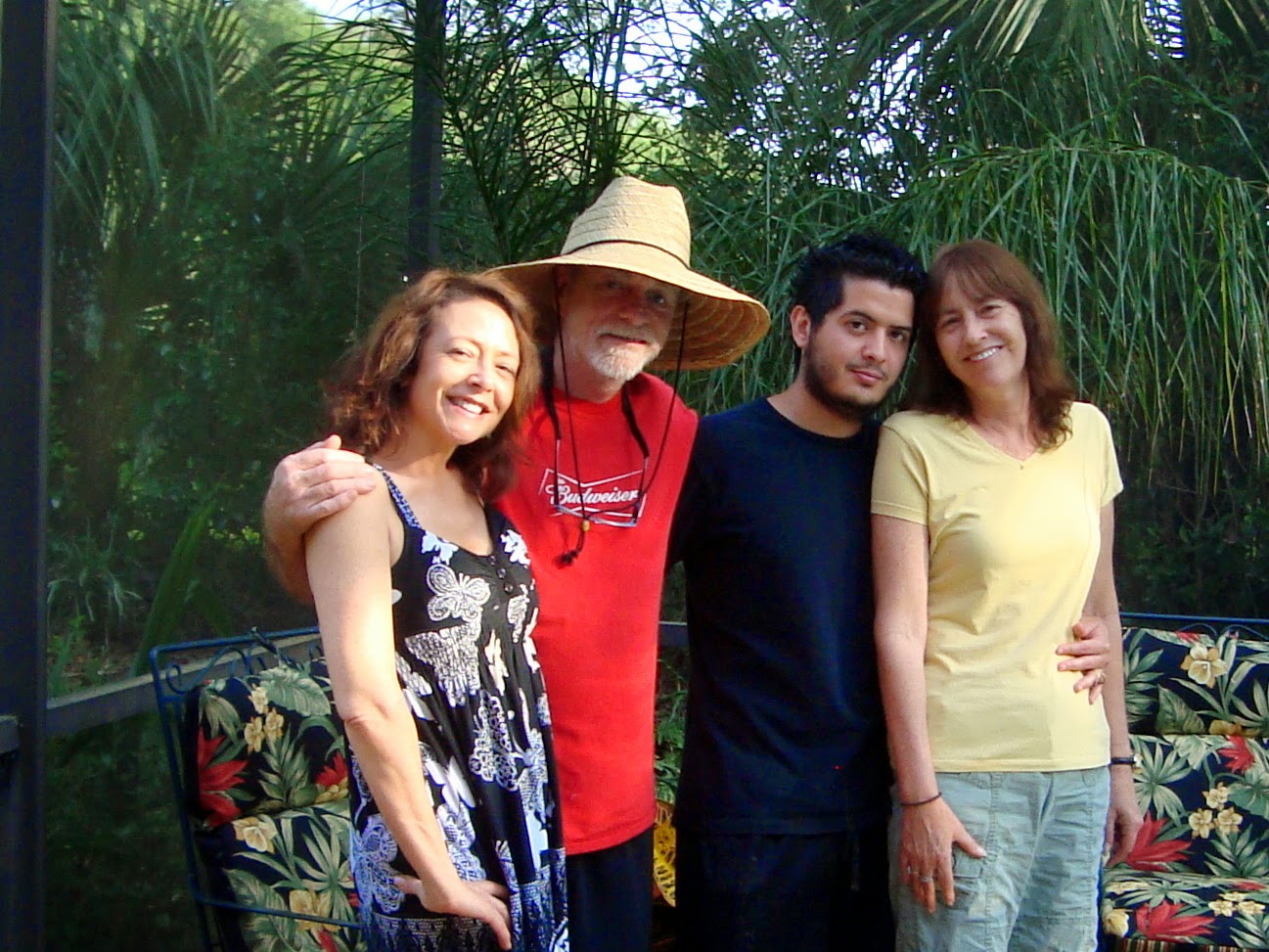 We all had a great time talking, drinking, and eating, eating, eating!!  Tracy is restaurant manager on a nearby country club and is an excellent cook!!

Posted by Highway Runner at 10:59 PM No comments:

May 04 - We left Florida, heading back to Richmond, VA on May 02.  We stayed at RPI Walk About campground in Woodbine, GA just north of the Florida/Georgia Line.  (Sounds like the name of a country western band!)    It happened that this was the weekend of the Fernandina Beach Shrimp Festival just a few miles south in Florida.  Fernandina Beach is the birthplace of the modern shrimping industry in the United States.  In Fernandina Beach, Florida, the Isle of Eight Flags Shrimp Festival is an annual tradition, always held the first weekend in May. This huge festival attracts over 100,000 people during the weekend .

I can't believe it!!  We decided to go to the big event!! 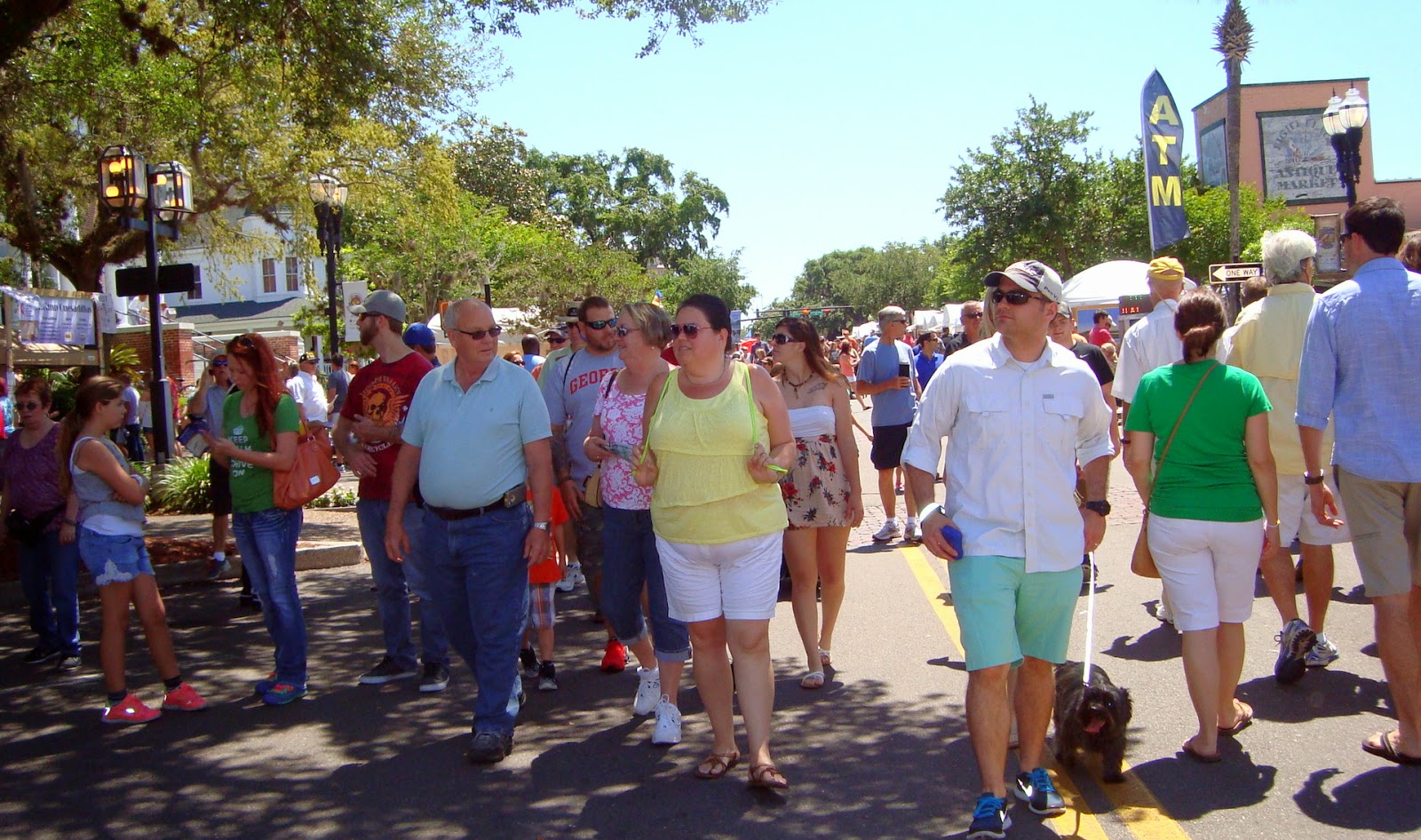 The marina was full of boats!!  The JUDGE was a well-known Shrimp Boat. 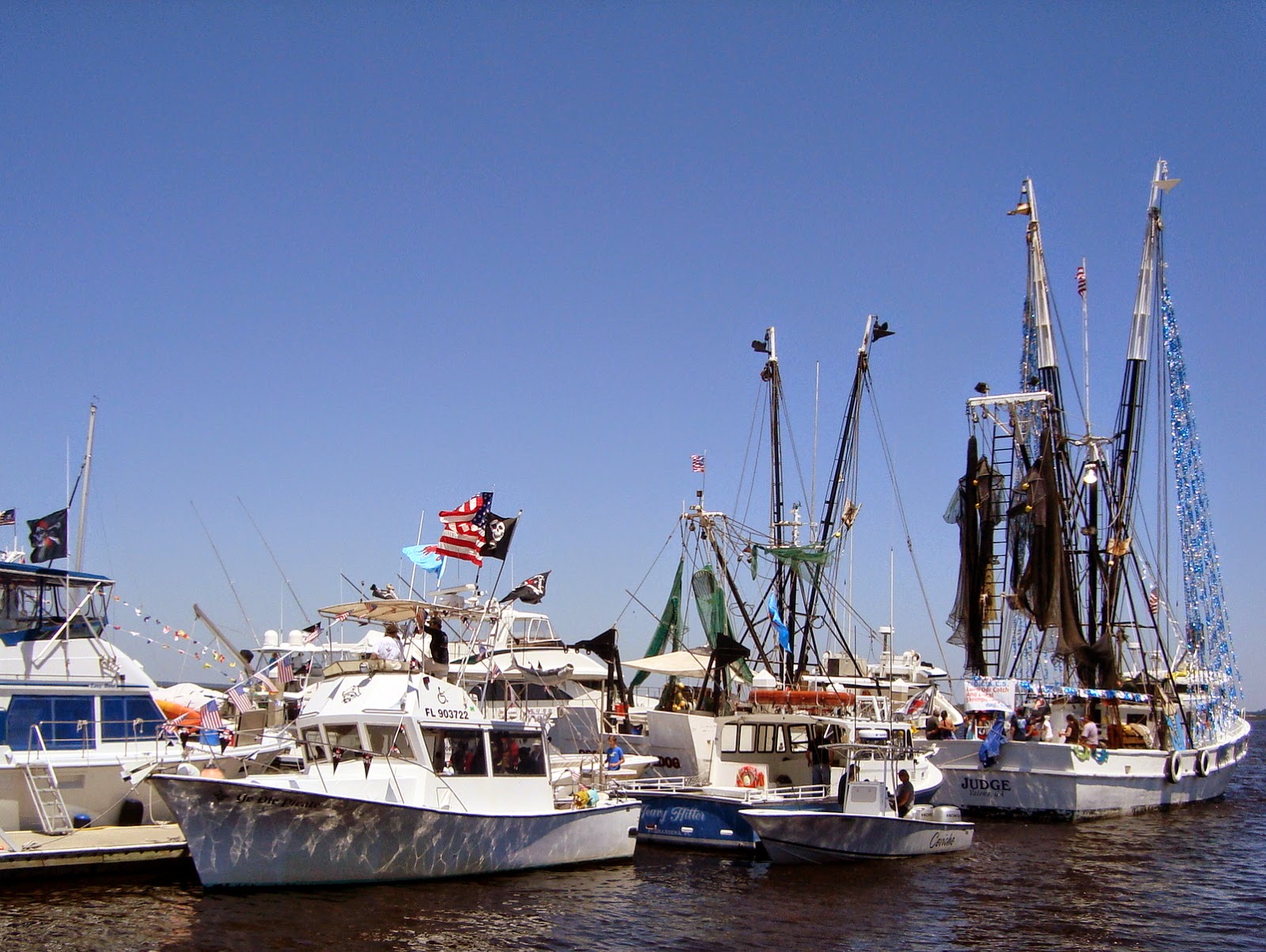 There were lots of shrimp and food vendors everywhere, crafts and music. 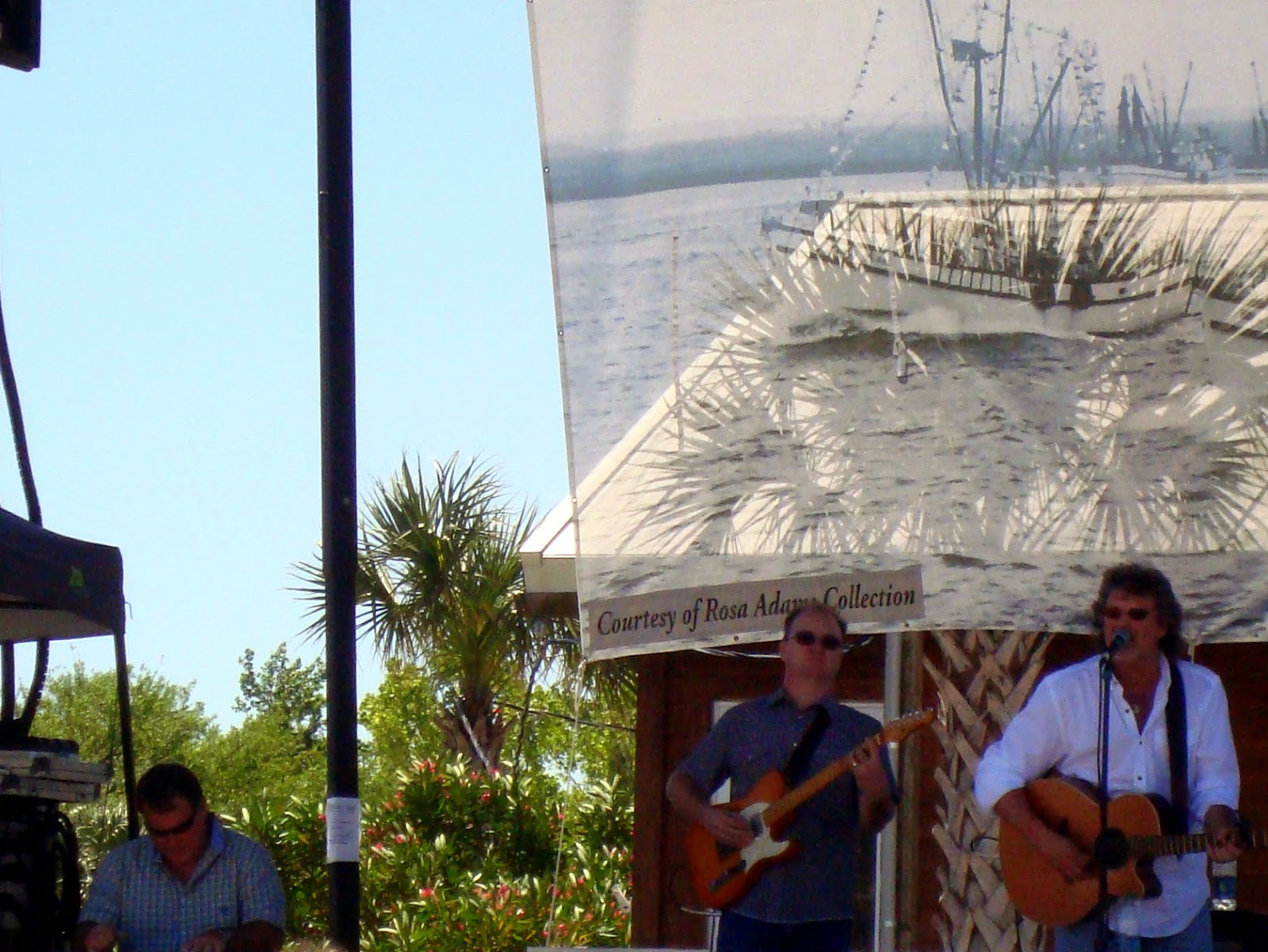 Everything was perfect!!  Even the boat lines! 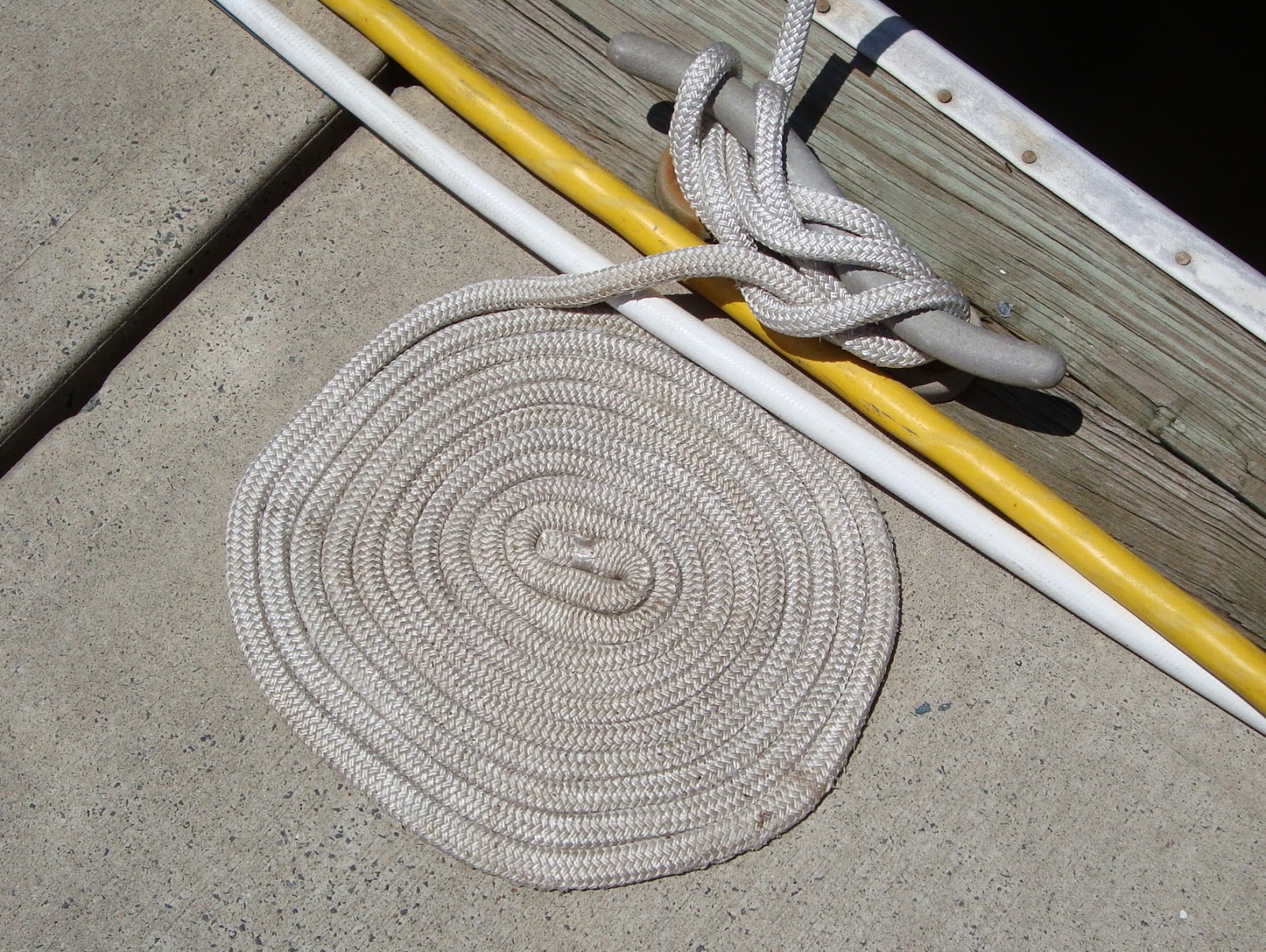 It was a lot more walking than we like to do at our OLD age!!  We were certainly glad when Pirate Calico Jack came to pick us up in the shuttle bus!! 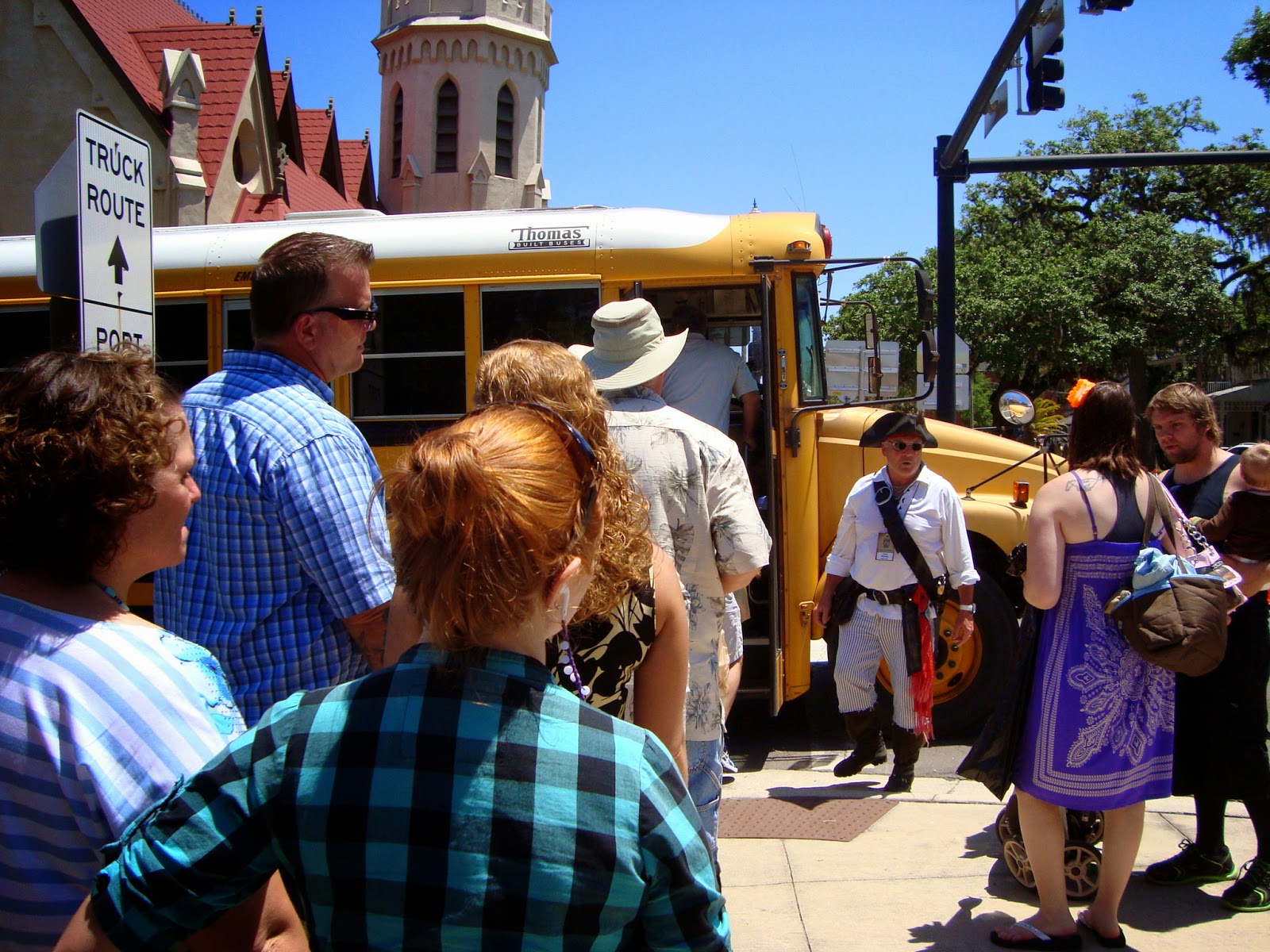 If you are ever near Fernandina Beach on the first weekend in May, we highly recommend their Shrimp Festival!!
Posted by Highway Runner at 10:59 PM No comments: