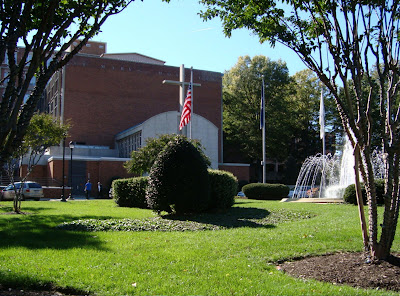 Early this morning (Friday 10/31), we arrived at St. Mary’s Hospital in Richmond, VA. Ken’s hip surgery was scheduled for 9:15 AM. We needed to be here at 7:15 AM. He was taken down to prepare for surgery at 8:30, but Dr. McGlynn, his surgeon, had a couple of patients ahead of him.

Mike and Diane came to the hospital at about 10:00 to wait with me, and to be here when Mike’s Dad came out of Recovery. I was glad they were here because it turned out to be a long, long day. Besides, Diane is a nurse and it helped to have her explain all this stuff to me.

We later learned that Ken was not actually taken into surgery until about 11:30. At about 2:30 PM, Dr. McGlynn came to the Waiting Area to explain to us about the surgery. He started with, “It’s about 2:30, so you know we did a LOT.” Turns out, instead of just replacing the ball, he had to replace the ball AND the socket and add some additional screws to hold the apparatus in place. Fortunately, he did not have to replace the shank that went into the femur. He said Ken was awake, talking and doing well. I gathered from what he said, that the new joint is more “heavy-duty” than the previous one, and should be nearly impossible to dislocate. Also, this weekend, Ken will be fitted with a hip brace that he is to wear for about six weeks. This will restrict movement and give the hip sufficient time to heal completely.

We expected Ken to be in his room about an hour after talking with the doctor. But, while in Recovery, his blood pressure dropped and had to be brought back to normal and stabilized before he could be released. It was about 7:30 PM when he was finally brought up to his room with his new hip!! WHAT A DAY!!!

You will want to know, Ken is looking good and strong, and seems to be doing quite well; joking with the nurses; can’t get enough to eat; and is once again in control of the TV remote!!!

Thanks to everyone for all of your concern!!
Posted by Highway Runner at 12:27 AM 4 comments: