BACK HOME AT TT CHESAPEAKE BAY

April 26 – We left Goldsboro Monday morning and drove straight to TT Chesapeake Bay. Julia, Head Ranger, met us at the Ranger Station and welcomed us back. As we were coming through the gate, Ru, Assistant Manager, drove in behind us and welcomed us back, too. It was good to be “home”. 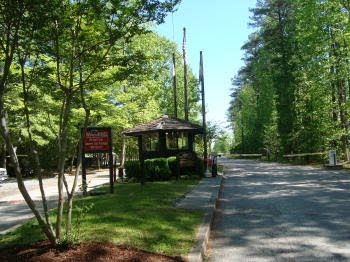 After hooking up, the first thing Ken did was to go down to Mike’s site and borrow the golf cart. We have really gotten spoiled using the cart while here at Chesapeake Bay. 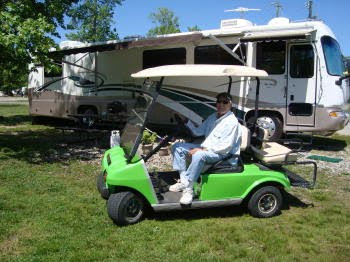 We drove around the campground. The Iris, Azaleas and purple Pomona were all in bloom. 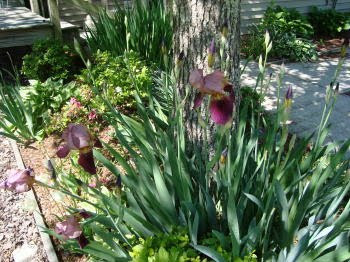 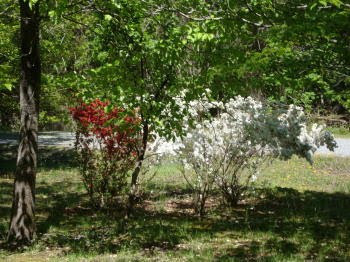 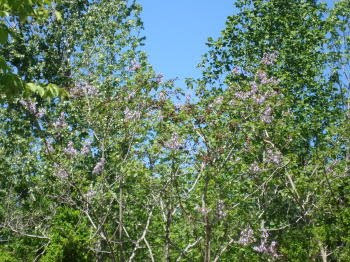 The River was beautiful and peaceful on the day we arrived. It would be dark and covered with white caps the next day!! 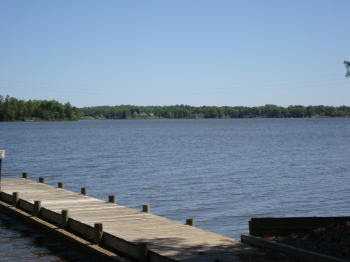 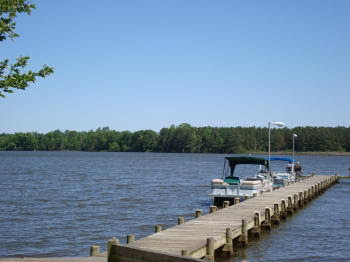 We drove over to the Pickleball courts and saw Mira and Renee playing. Krystal, Nate and their two boys are also here, but they play either in the afternoon or at night. We decided to play later Monday afternoon, but that same day the weather turned frigid and windy!!! The cold and wind continued until today, Thursday!!

We drove the cart around again today to see who is here. That’s when we saw “Mama”. Actually, she’s Tim’s mother but everyone at the campground calls her “Mama”. We were really surprised to discover that she has sold her motor home and bought a View to use for traveling and, 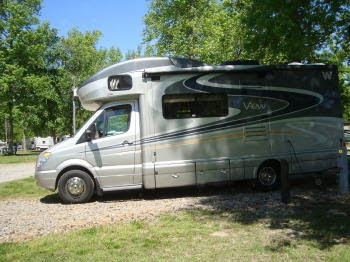 she also bought a Trailer to keep on her site at Chesapeake Bay. 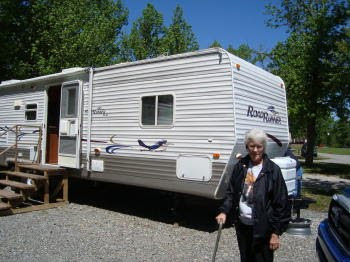 Enjoy, Mama!!
We also noticed that Ron is here in their usual site. Kathryn will be coming down for the weekend. You see, Kathryn, he does NOT actually work all the time!!! 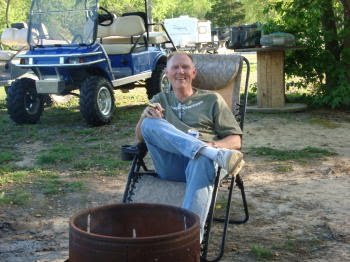 We ran into Mira and Renee heading for the Pickleball courts about 5 o’clock so we joined them for a few games. It was a lot of fun to be back on the courts!! 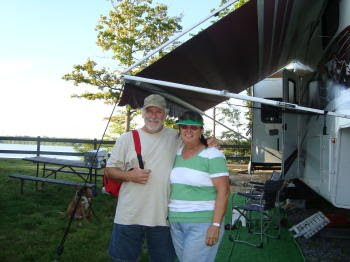 I volunteered to teach line dancing on Friday and Saturday afternoons when we are here!! Looking forward to that tomorrow.
Posted by Highway Runner at 9:37 PM 5 comments:

A FUN WEEKEND WITH DAUGHTER STASIA AND FAMILY

April 23 – 25 – On our way to Virginia we stopped in Goldsboro to spend the weekend with my daughter, Stasia, and her family. Stasia has a friend who owns a farm and we hook up there whenever we are in town. 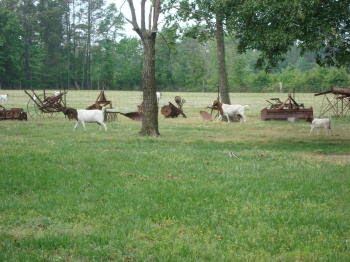 My grandson, Michael, was playing in a Conference Baseball game at the High School on Friday night. We hooked up the RV and met them at the game. [See Article CONFERENCE BASEBALL GAME, April 23.]

Another ball game was scheduled for Saturday night. Before the game, Ken prepared Italian Sausage subs for everyone.
Jake helping Ken prepare dinner! 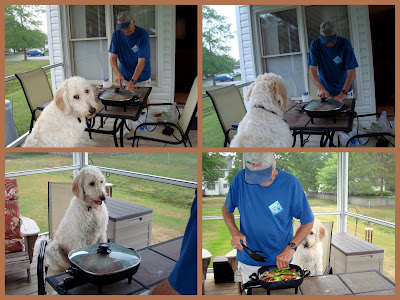 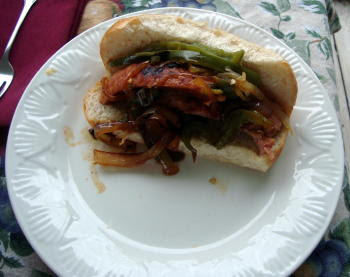 After dinner pictures! Gene, Faye, Stasia, Ken and Jake!
Plus the frying pan!! 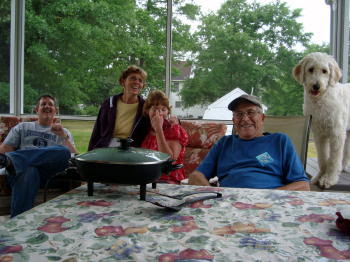 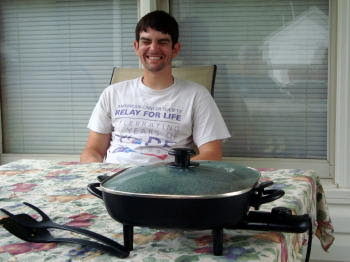 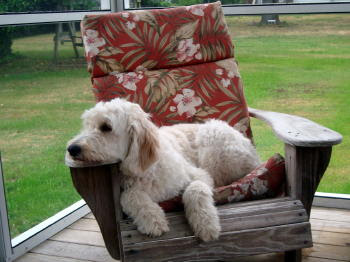 It turned out the game was rained out. So we stayed at Stasia’s and we taught them to play Euchre. It was Ken’s lucky night and it seemed the guys would win everything. Stasia kept telling them we would have to play until the girls won a game!! Fortunately, we were able to win the third game and Ken and I could go back to the RV!!

April 25 - On Sunday, we prepared breakfast for everyone at the RV and then I went to church with the family. Later on Sunday, Ken and Gene watched the NASCAR Race, so Stasia and I took advantage of that time to do a little line dancing.
Stasia and Gene took us to Outback for dinner on Sunday evening. 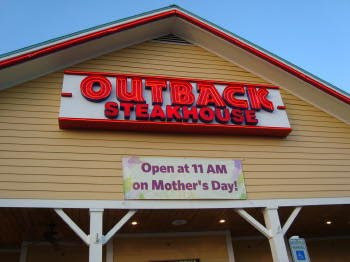 The chef overcooked our Steaks and had to prepare them again. 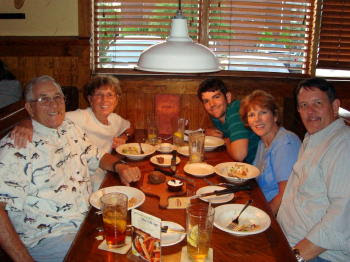 They gave us complementary desserts for having to wait!! Chocolate Thunder!! 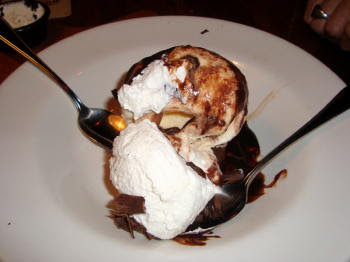 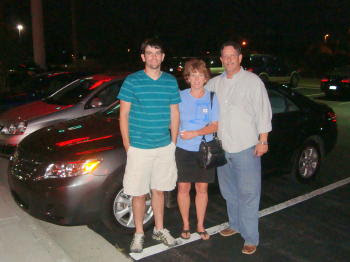 It was a wonderful weekend!!! WHAT FUN!!!

April 23 - The Wayne County Senior Games presented their Annual Silver Arts Follies on Thursday night. It is the Arts portion of the Senior Games.

Stasia, in her job with Parks and Recreation, is very much involved with the organization and conduct of the Senior Games. A group of Seniors from her group, the Silver Tappers, performed their routine to “Chattanooga Choo-Choo”, and got their pictures in the Goldsboro newspaper!! 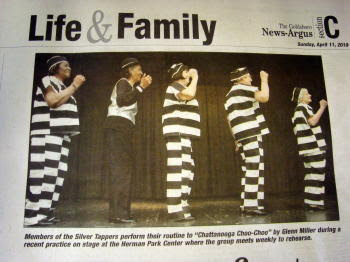 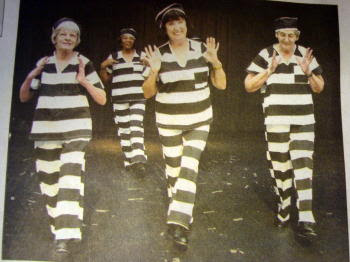 Posted by Highway Runner at 10:48 PM No comments: