Yes. I was so stupid!! Last month I got a call from someone (I thought a Verizon rep.). He asked if I wanted to sign up for another two-year agreement with Verizon. I’ve been happy with my service, so I said “OK, but do not change my plan!!” I explained how I was grandfathered under a plan (America’s Choice) and for $5.99 a month I could use my cell phone as a modem to connect to the internet and e-mail. Someone else came on the line to confirm what we had agreed to. I said again, “OK, but do not change my plan.”

A few days ago I received an e-mail from Verizon advising that my bill was ready for viewing and would be automatically deducted (as usual) on July 04. The amount of the bill was $464!!! I immediately called CS, thinking there was an error. She told me the charge was for megabytes used for the internet!!! I stated that I had used my phone as a modem as I had for the past four years. She told me I had a new two-year agreement and as a result my plan had changed to Nationwide and under the new plan I was charged per megabyte!!!

I immediately went to the local Verizon store and talked with the Manager there, explaining how I had told the telemarketer several times not to change my plan, but my plan was changed. Also, I gave him a copy of my contract dated February 2007 that does not end until February 2010. I still have eight months remaining on my current contract.

He understands my plight. Apparently, my contract information was entered incorrectly in their records, and since my contract does not expire until 2010, my account should never have been turned over to be called about a new agreement. He is currently contacting his “contact” about refunding the outrageous charge and voiding the new agreement and reinstating my America’s Choice Plan. GOOG LUCK with that!!

In the meantime, I can’t use my cell phone as a modem and must rely on WiFi at a remote location. That’s what I’m doing today.

I hope you learn from my mistake.
Posted by Highway Runner at 4:32 PM No comments:

“KINGS OF SWING” IN OUTDOOR CONCERT

Last Thursday evening I joined our friends, Lois and Gene, at an outdoor concert at the local Short Pump Town Center. It was a huge crowd gathered in the center of the shopping center to hear the “Kings of Swing”, a local group with that “big band” sound. The band was great. The weather was great. The friends were great!! And the food was great. We had coupons for free Chic Fillet sandwich with the purchase of drink and a side, which we bought before the concert and enjoyed while listening to the music. The entire evening was GREAT!! Thanks Lois and Gene for a good time!! 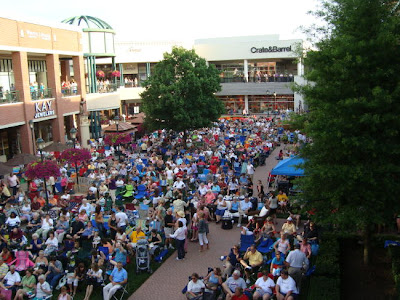 Here is the crowd at the Town Center. See the tree on the left. A little to the right of it is a slightly visible street light under the Crate & Barrel name. We are seated somewhere between the two!! 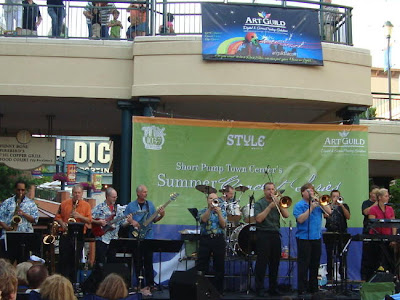 This picture shows the entire band. 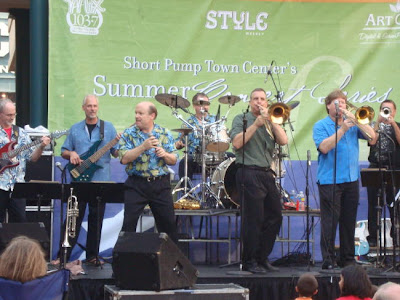 A close-up of the brass section.
Posted by Highway Runner at 3:57 PM No comments: