HAPPY HOUR WITH MARK AND CHRIS

Friday, December 10 – Mark and Chris had Happy Hour this evening. About twenty Pickleball players and friends were there for a most delicious and enjoyable time. 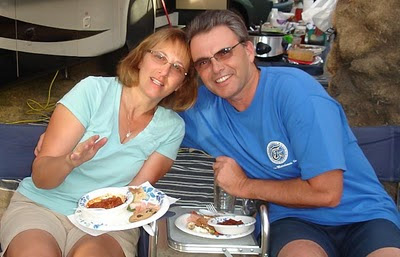 Mark was anxious to try out his new “Campfire In A Can”. I think he was very pleased with the performance!! 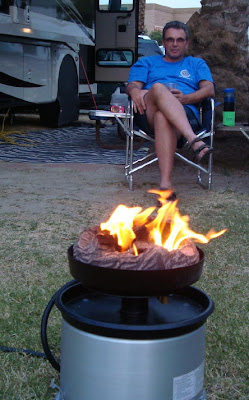 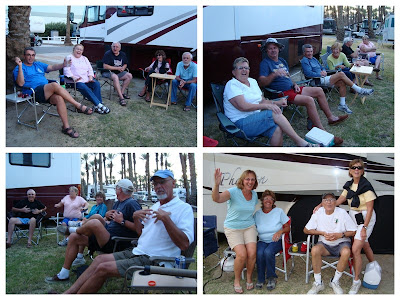 Thanks Chris and Mark for a great time.
If you think you would be interested in the Campfire In A Can for your RV travels, click on Mark's Blog (Pheaton Place) in the right margin of our Blog. He tells you all about it!!
Posted by Highway Runner at 1:14 AM No comments:

Thursday, December 09 – The Marine Corps Band from Twenty-Nine Palms held its annual Christmas Concert in Palm Springs tonight. A group of us paid another visit to The Elephant Bar for Happy Hour enroute to the concert. As usual, everything was great!! 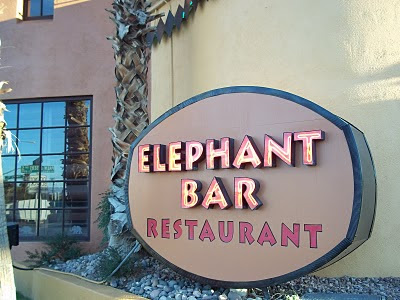 Dottie and Larry; Connie and Fred; Pam and Bob; Ken and Faye. 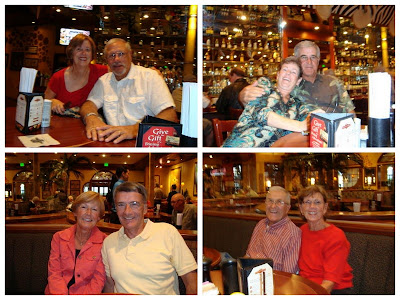 The concert of Christmas songs was very enjoyable, especially the second half when the entire band played. As an encore they played a moving medley of military anthems. When the band stood to play the Marines Hymn as the final song, I felt such pride I could not stop the tears that welded in my eyes. 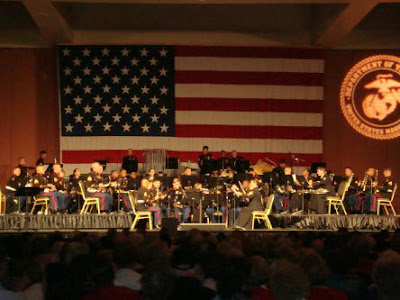 Posted by Highway Runner at 1:28 PM No comments:

Sunday December 05 – The Annual Tamale Festival was in Indio this weekend. Whenever we are in California at this time, we go to the festival just because it’s there (although we don’t like Tamales!) I didn’t have a date this year because Ken did not want to go and he wanted to watch the Red Skins Game! I went to the festival with Pam and Joe. They lived in Mexico for years, so they are experts on all things Mexican!! I’d get their advice about Tamales.

Shortly after we arrived at the festival we saw Lucy’s Tamales. I had one. I thought it was pretty good for a Tamale. Pam said they didn’t like that kind of Tamale because it had white Masa dough. They liked the spices in the other type of Masa. As it turned out, Lucy's was the Best Tamale Winner for 2010 and 2009 and 2007!! 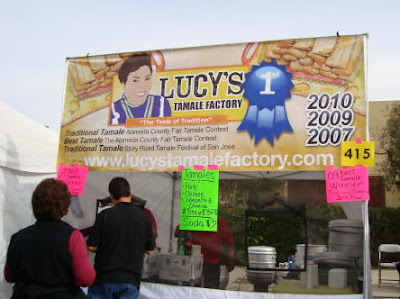 We walked the entire festival grounds before finding 9 Juan, Juan Tamales!! I was getting a Chili and Cheese Tamale when a customer came up and asked for another – “These are the best,” he said. “I’m on my third.” He was having Chicken Tamale so I changed my order. 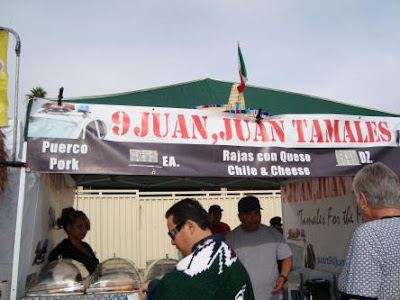 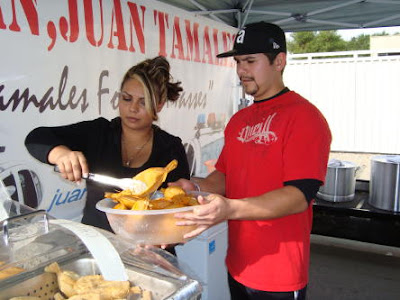 When I got my Tamale it looked like this. 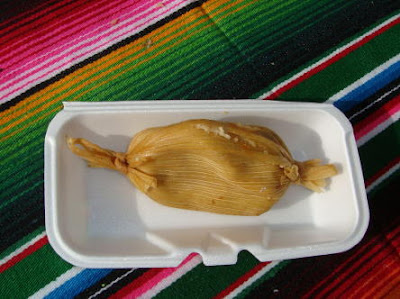 How do I get into it?? Juan said to hold the ribbons at each end and pull. They would slip off; like opening a present. It worked!! Pam confirmed. Mexicans serve Tamales at Christmas and wrap them like a present. (Side Bar: Lucy’s did not have the ribbons!).
The Mariachi Band entertained while we were eating our Tamales. 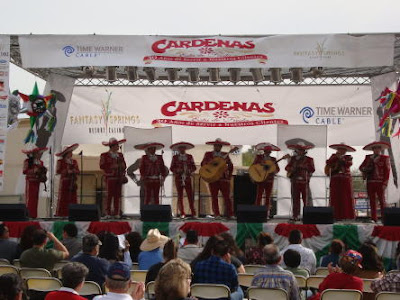 I, myself, did not care for the 9 Juan, Juan Tamale. I thought they had less Chicken and more Masa dough than Lucy’s Tamales, and they had other stuff in it – potatoes, onions, black olives, stuff!! Pam and Joe preferred these to others they had tried. They were like Tamales should be!

Thanks Pam and Joe for taking me. Chalk up one more Tamale Festival!!!
Posted by Highway Runner at 9:55 PM 1 comment:

December 04 – Tonight was the popular Festival of Lights Parade on Palm Canyon Drive in Palm Springs. The Blue Coyote Grill is located on the parade route. Ken and I had enjoyed their great Taco Salad a number of years ago and our taste buds were just watering to go their again. We invited friends to join us at the Blue Coyote before the parade; the plan being to leave our cars in their parking lot and to move out on the street in front of the grill to watch the parade.

Enjoying dinner - on the left: Chris and Mark. Barb and Mitch (right end) were in town for just a couple of nights before leaving on a cruise and they stayed with friends Moreen and Renny seated at the end of the table. On the right: Joe and Pam; Julie; and Ken. 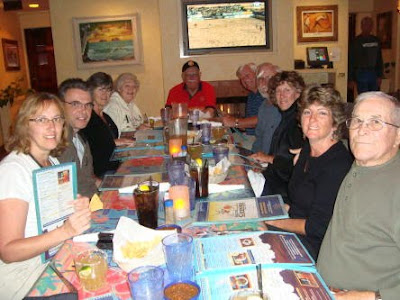 Here’s that wonderful Steak Tostado Salad!! Note the shell is tinted red. That's because it is a Chipotle Tortilla Shell. 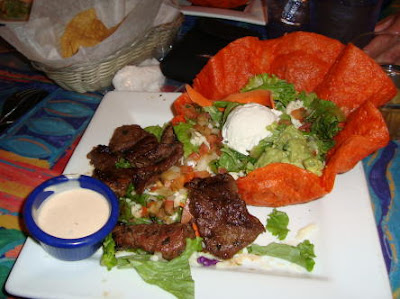 Here I am thanking the waiter for good service with a smile! My appearance is deceiving – I really didn’t have THAT MANY Margaritas!! 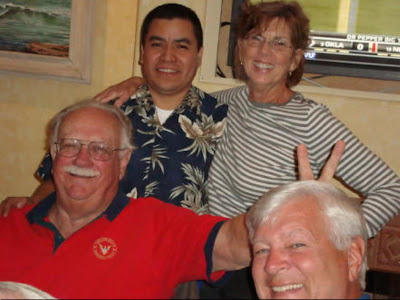 The plan worked!! We all moved out onto the sidewalk and watched the parade. The Festival of Lights Parade lived up to its name -- everything and everyone in the parade was covered with lights! 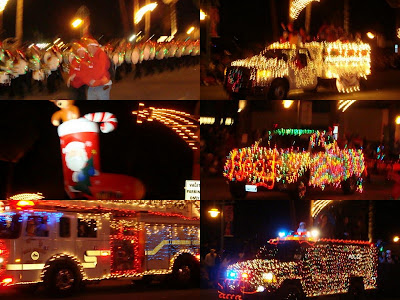 Lots of trucks above!!
A Cupcake with a cherry on top - entry by a local bakery. Very tasty looking!! 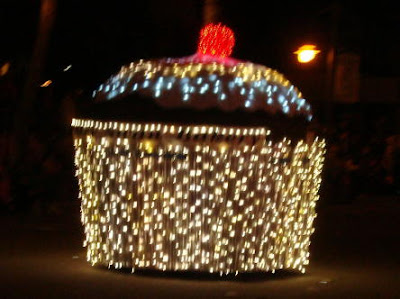 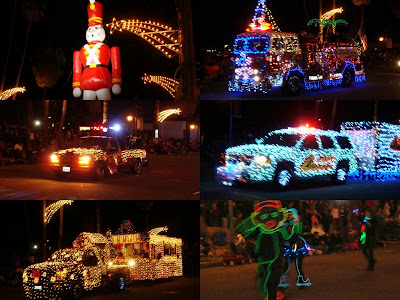 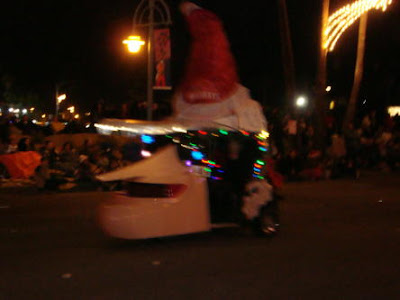 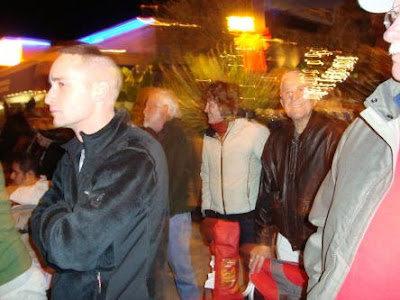 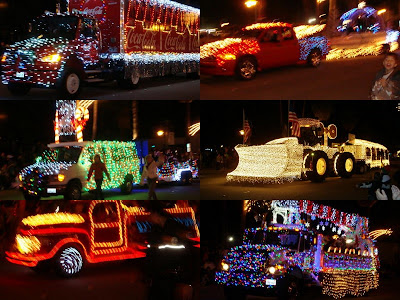 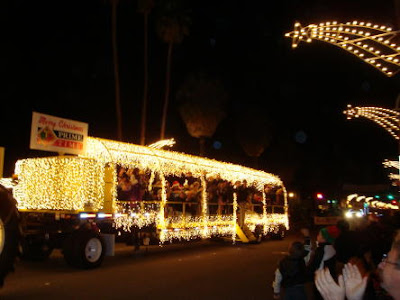 It really was an enjoyable evening!

Posted by Highway Runner at 11:28 AM No comments: