NEW TIRES FOR THE HIGHWAY RUNNER!!

Thur, Oct. 16 - We left TT Chesapeake Bay yesterday, heading to Florida.  We had made arrangements with Love's Truck Stop in Dillon, SC to purchase six new Michelin tires from them for our motorhome, Highway Runner.  UGH!!!  We had explained to them the type and size tires we needed and set an appointment for Thursday morning, October 16.  Love's arranged to have the required tires on hand.  . 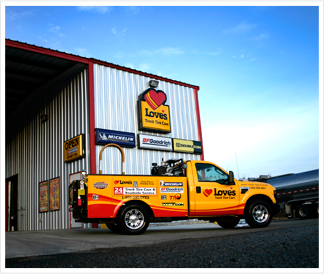 We contacted FMCA regarding their Michelin FMCA Tire Advantage Program and Love's submitted our bill through that program.  Guess we saved a few $$$ using the discount program!

Anyway, it's done now and we feel a lot more secure riding on six new tires!!

Sun, Oct. 19 - We got to Florida at our TT Orlando campground on Friday, October 17.  I called my brother Nelson to see if he was in Florida at his home in the Villages, and maybe we could get together.  He drove over to our campground on Sunday morning (about 70 miles) to spend the day with us

We started out with Garden Bloody Mary's.  I call them that because along with the Vodka we added V-8 juice, lime, celery, olives and pickled okra.  We learned how to make these really good Bloodys at the Bloody Mary Bar at Wallaby's anniversary brunch!!  UUMMMM!!  A little later we enjoyed our own brunch of sticky ham rolls and spinach salad.

Ken wanted to watch the NASCAR races that afternoon, so Nelson and I went to Downtown Disney (about 12 miles) and took the FREE Boat Rides!!!  FREE!!

Actually, the boats were a fleet of "taxis" or "ferries" that transport guests from the various Disney resorts located on the man-made Sassagoula River to Downtown Disney Marketplace on Lake Buena Vista (also Disney-made). It was not real exciting or thrilling as some boat rides, but it WAS very pleasant and relaxing.  A nice way to spend the day with my brother!!! 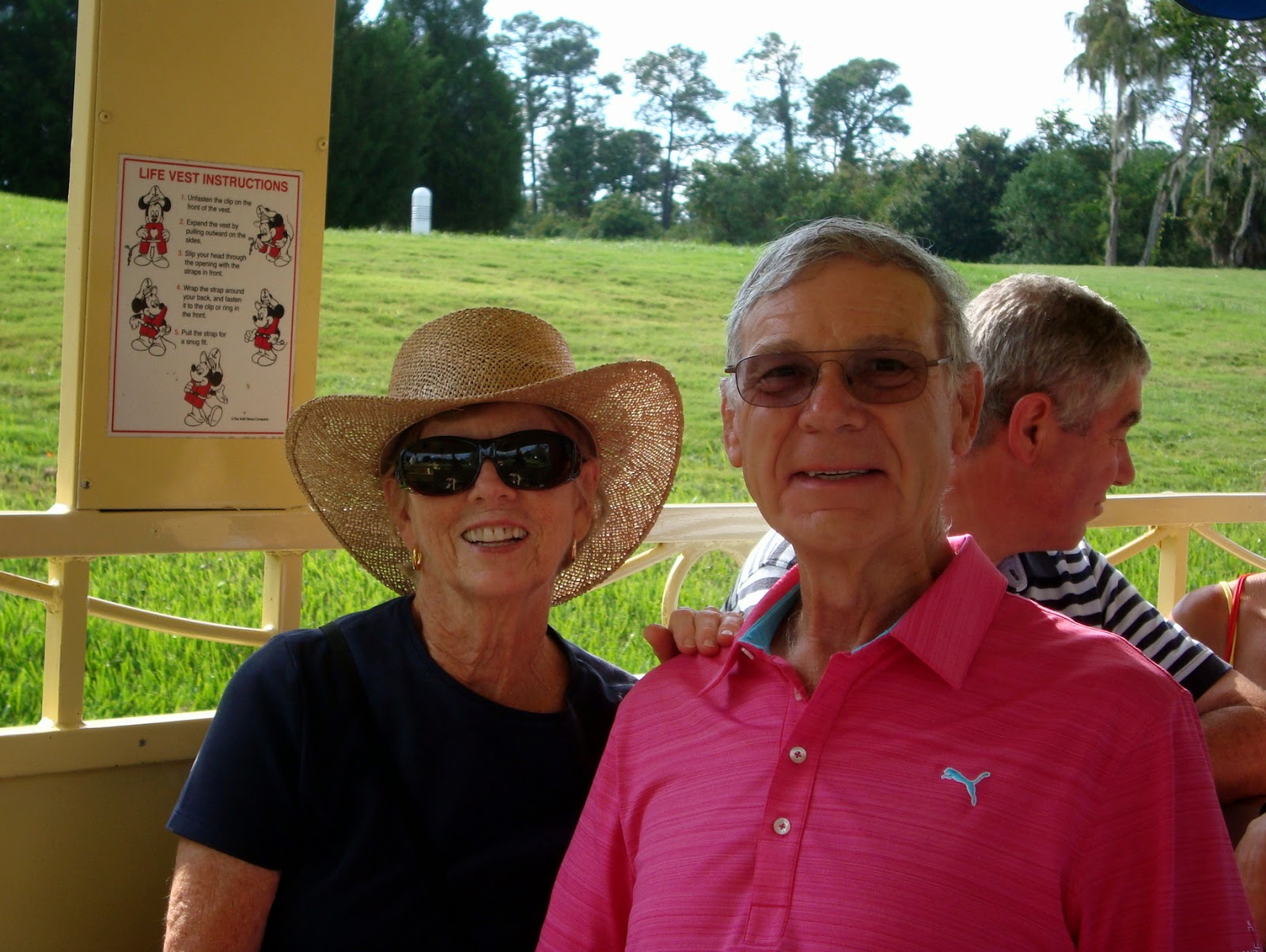 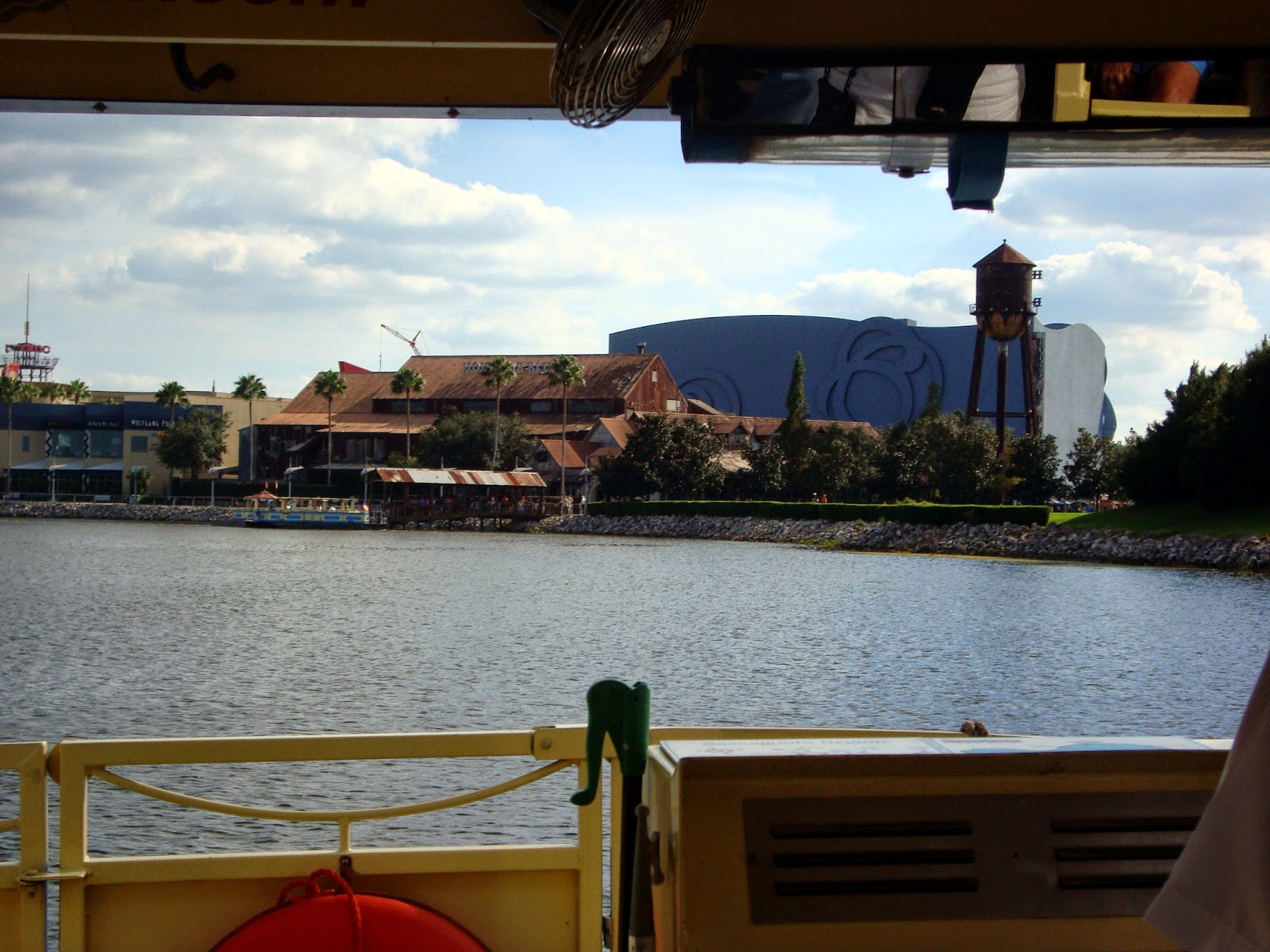 We took the "Local" Taxi to stops on Lake Buena Vista. 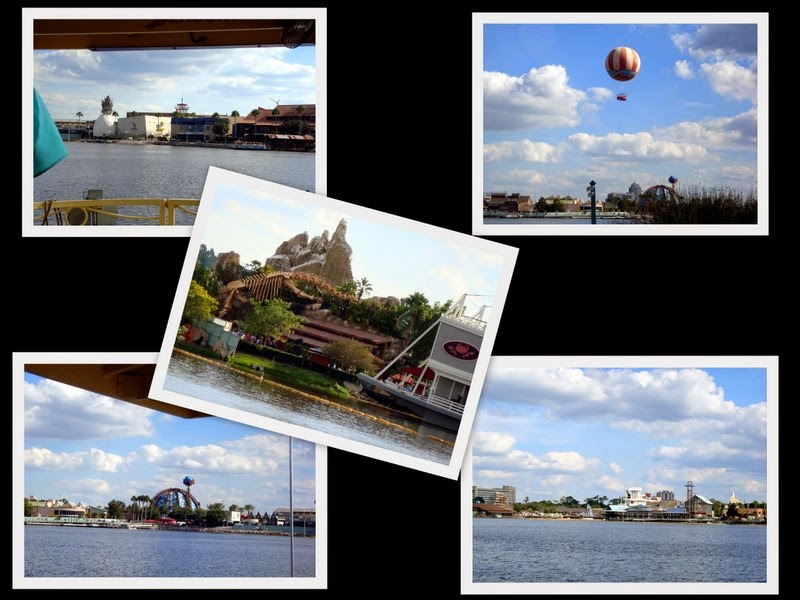 Fulton's Crab House is a replica of a riverboat.  We'll have to come back for crabs sometime! 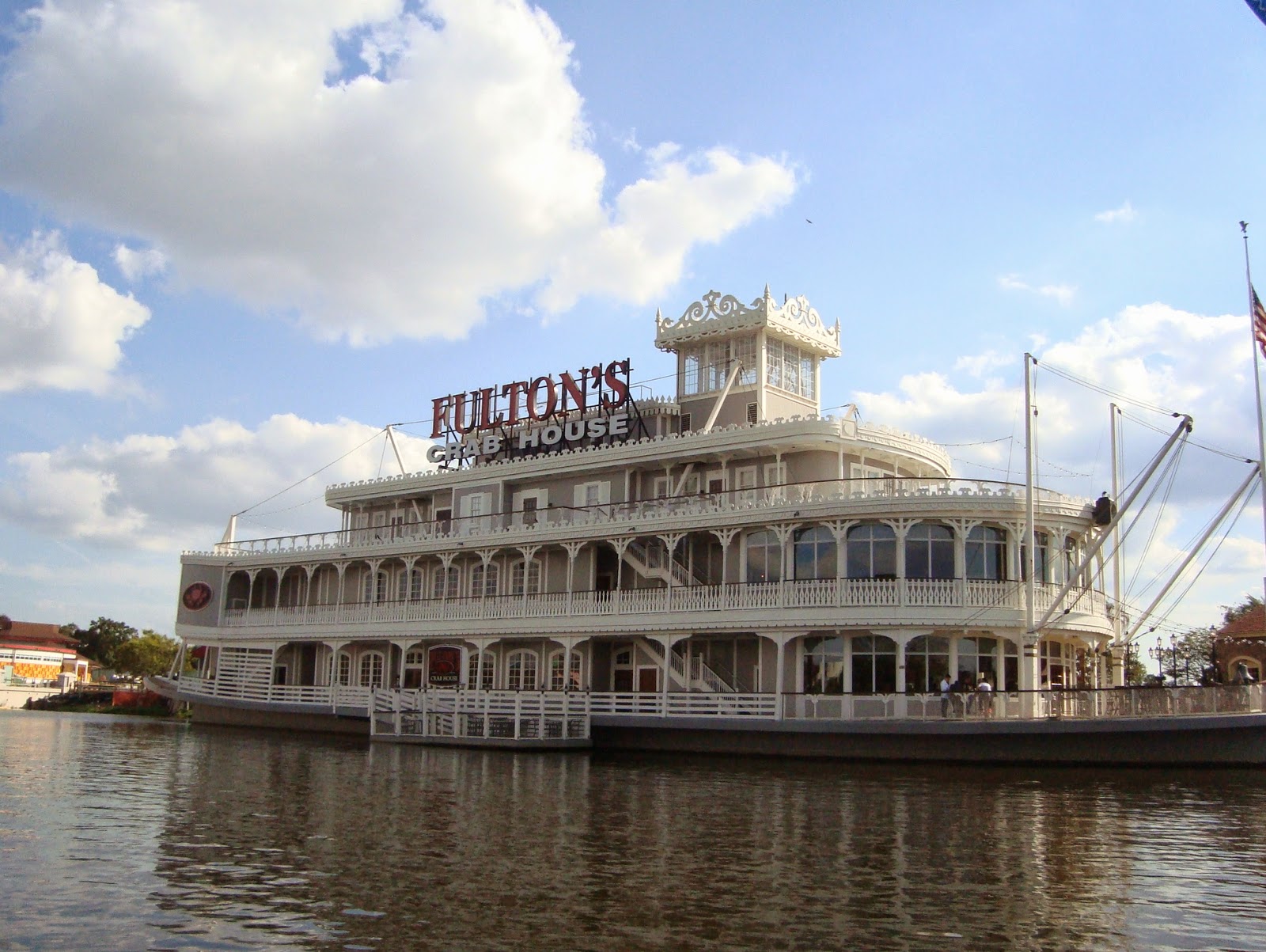 We took the ferry to the Disney resort Old Key West.  The resort looked like some of the old building in beautiful Key West. 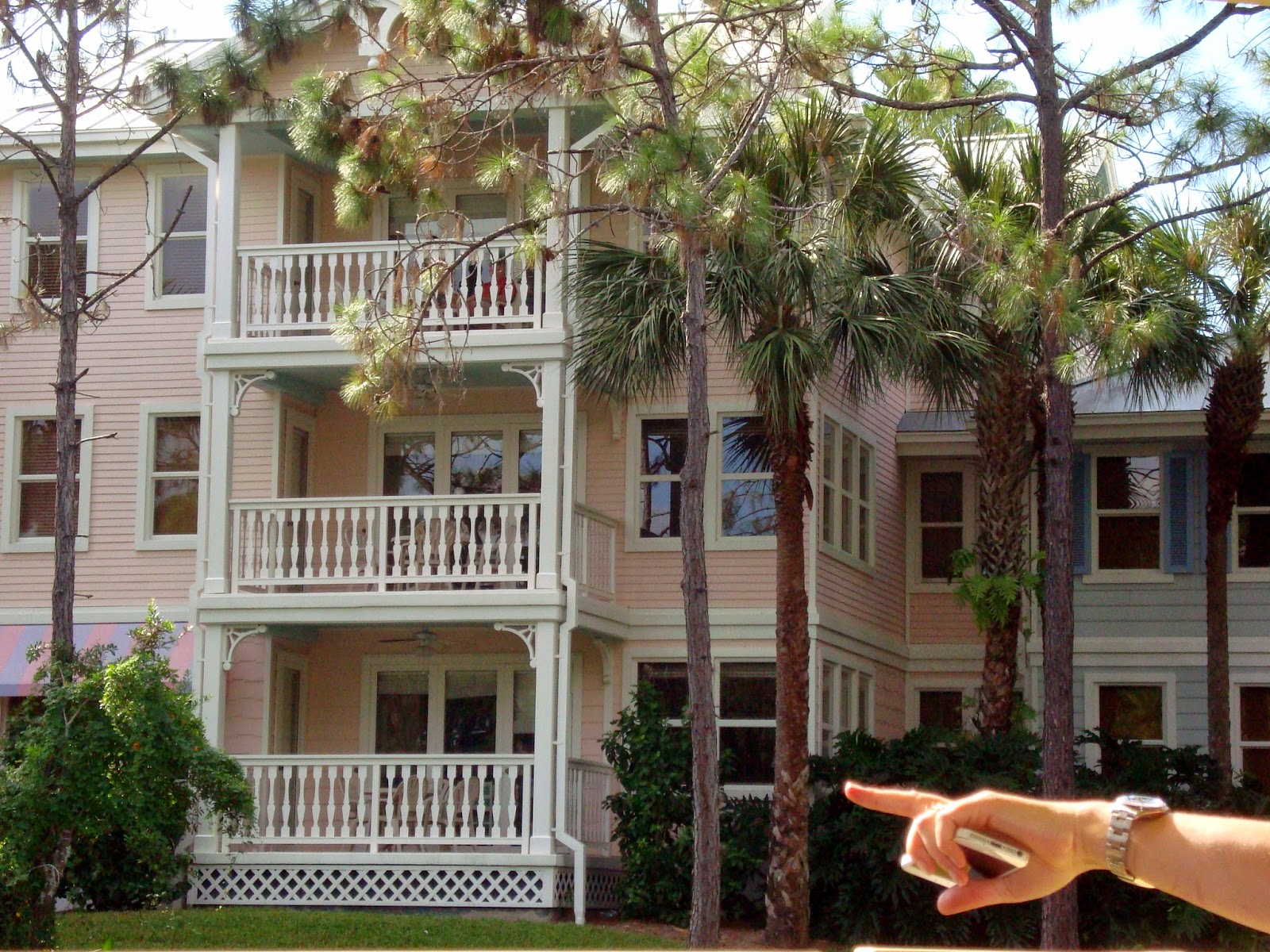 Another cruise took us to The French Quarter where the resort buildings resembled Bourbon Street in New Orleans. 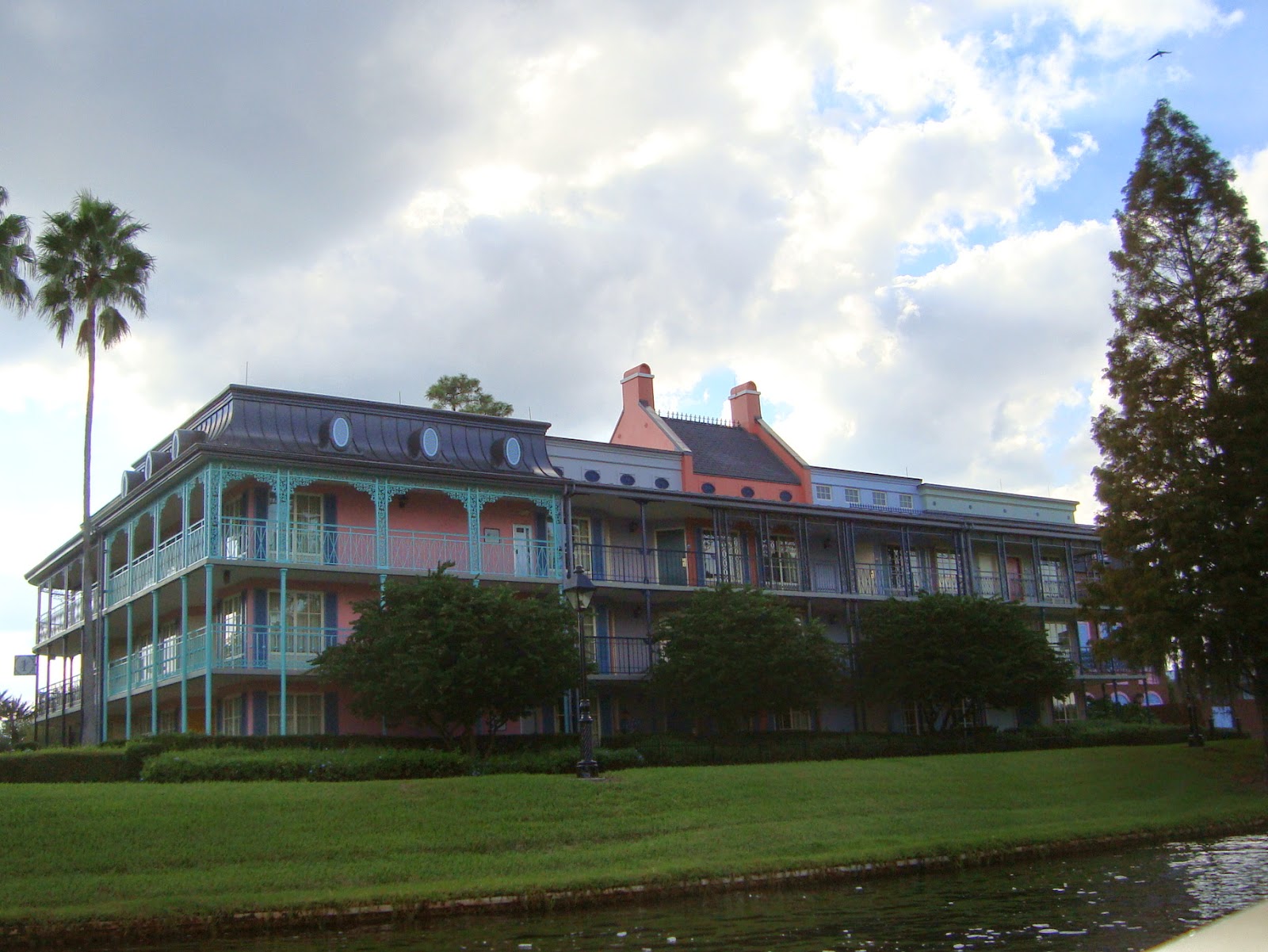 A little further on we arrived at Port Orleans.  Here the resort was made up of a number of majestic  southern mansions. 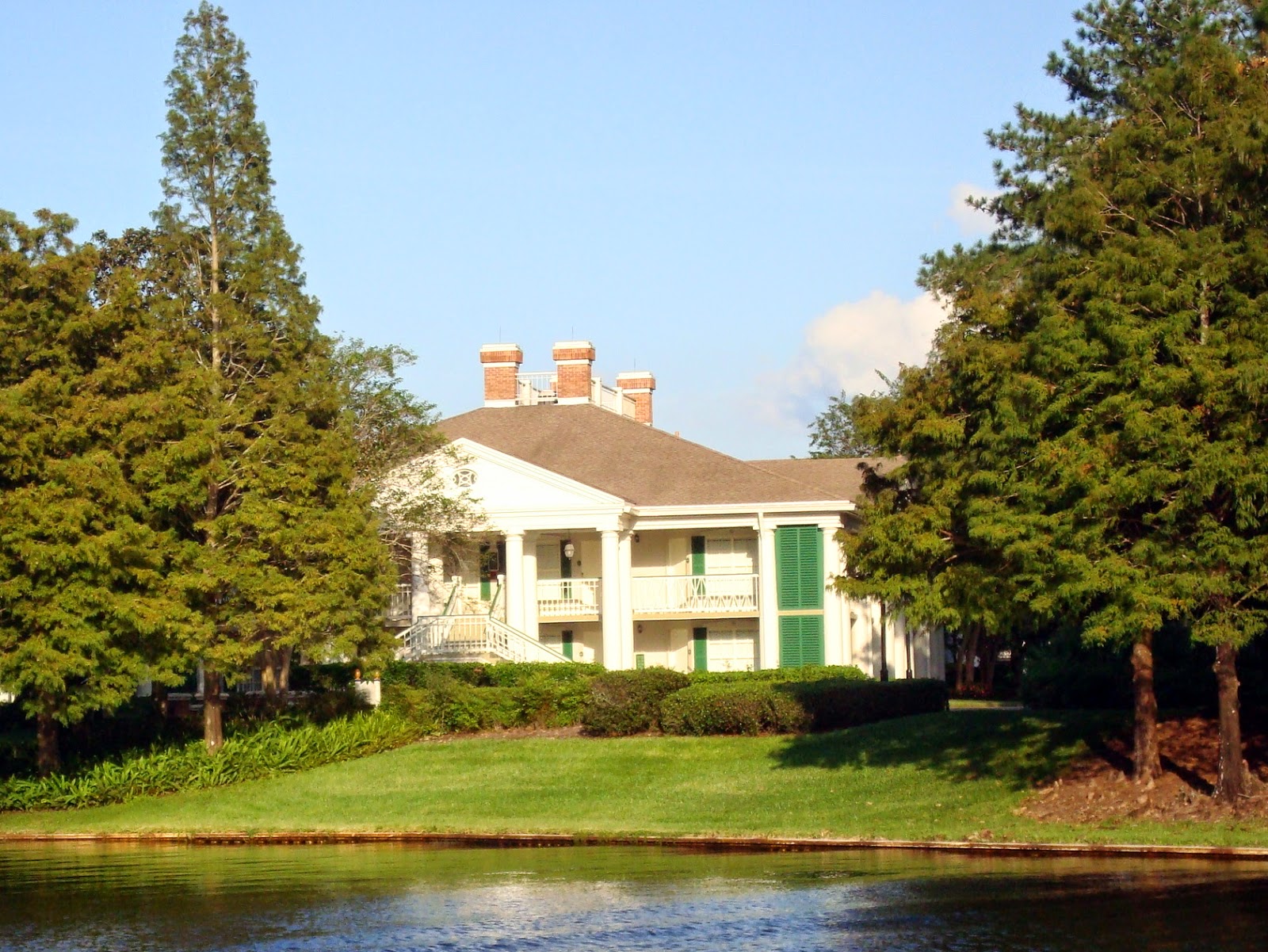 There were some restaurants and shops at the Dock in Port Orleans. 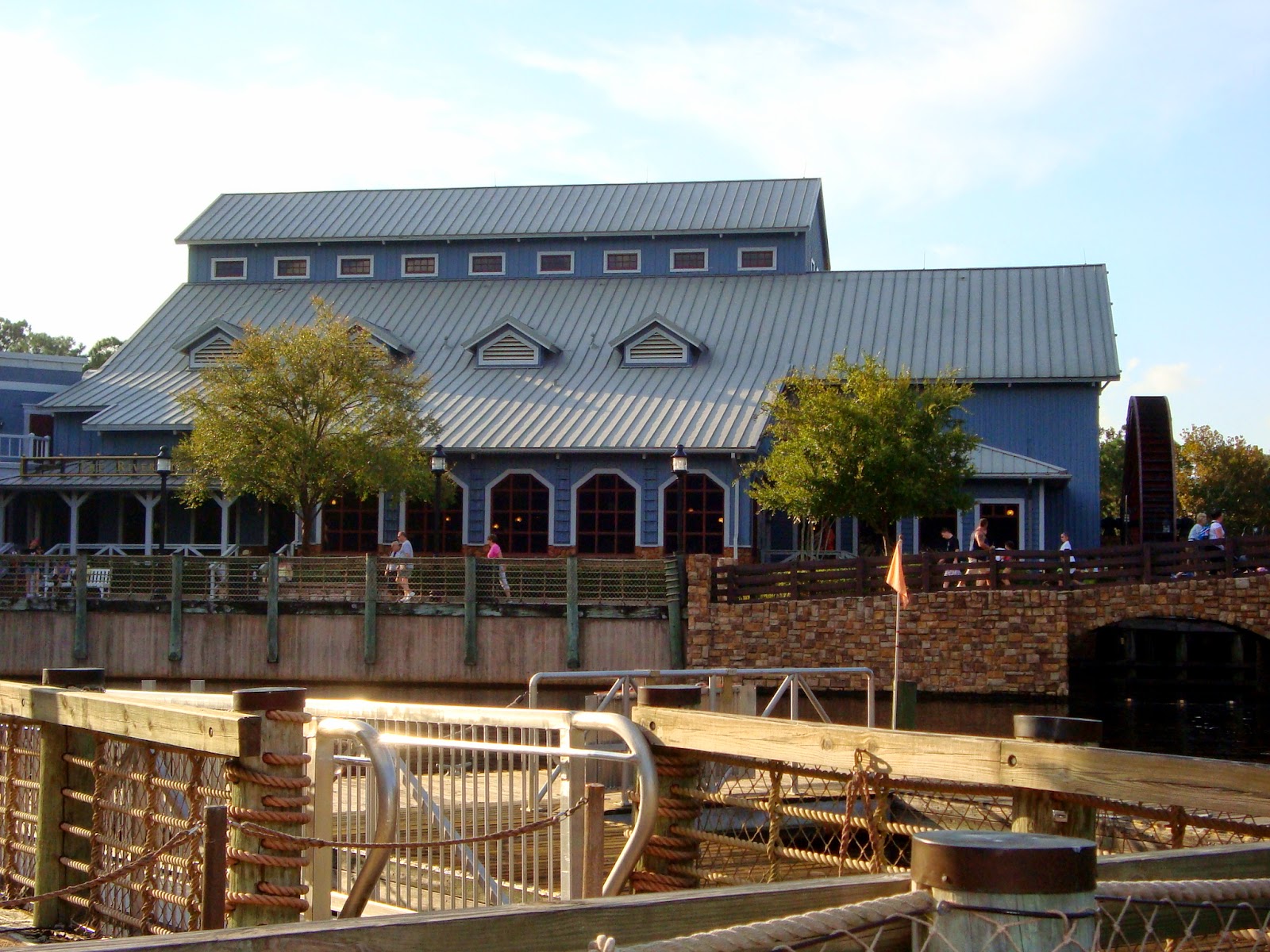 It was a very enjoyable day cruising around the Disney resorts.  We did not even know all these resorts were back there!!  Something we will have to do again!!

Sidebar:  Our boat captain said that Downtown Disney is in the process of expansion.  By 2016 it will have double the number of building and restaurants!

Posted by Highway Runner at 10:17 PM No comments:

Mon, Oct. 27 -  On our way home from the FREE boat rides at Disney Downtown, we noticed the crowd parked at Miller's Ale House on Hwy 192 -- a VERY popular place!  Gotta be a sports bar!  I checked out their menu on their website.  Turns out every night they have a different special entree.  The Monday night special is a full rack of ribs for $10.99.  Sounded good to me!!

In the past we have always gone to Oakwood Smokehouse and Grill in Clermont for their full rack of ribs special, but we decided to give the Ale House a try this time to see if their deal is as good at that at Oakwood.

Entrance to the Ale House. 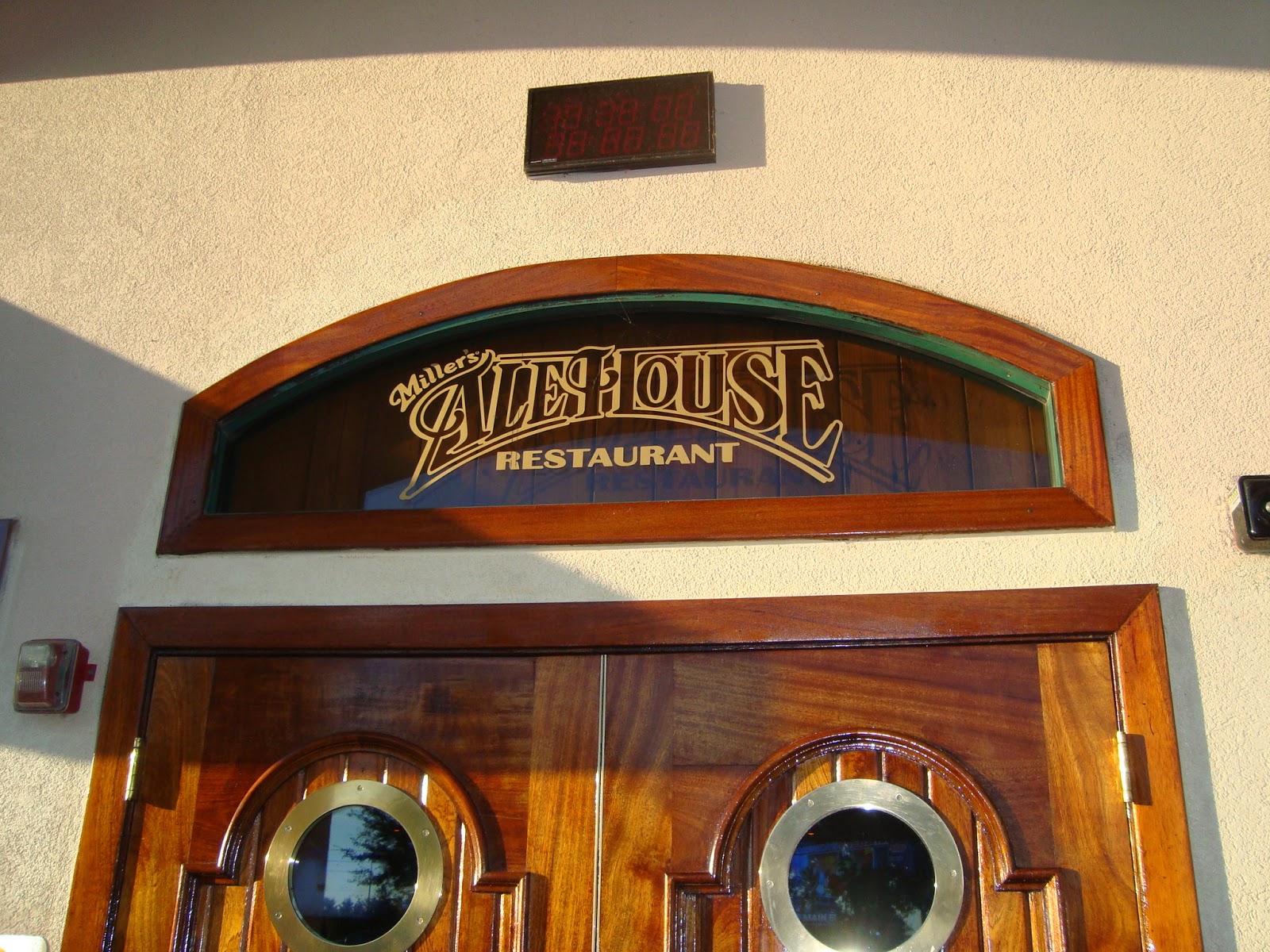 As we suspected, The Ale House is a sports bar.  TV's with various games playing covered every wall of their large dining area. 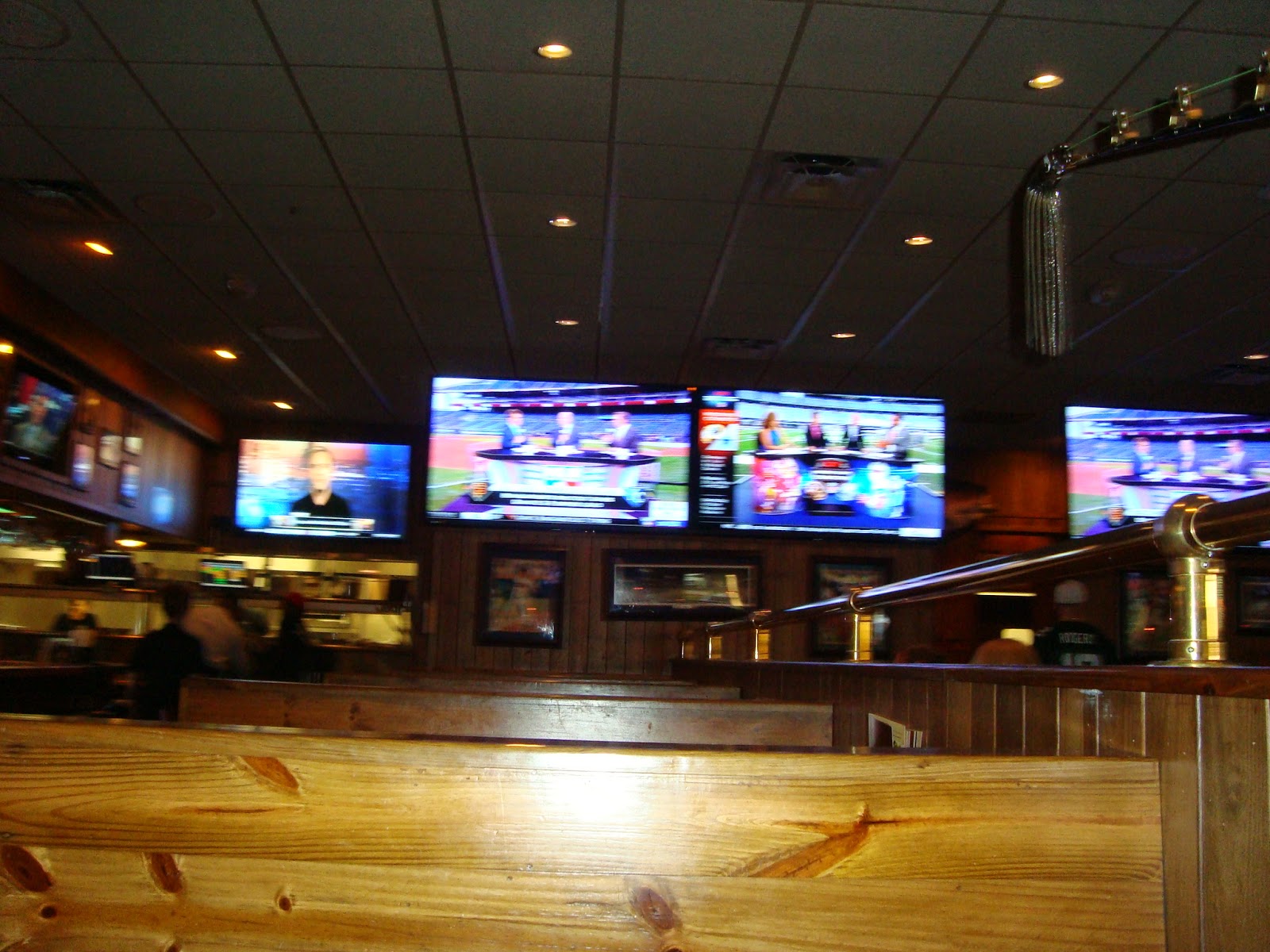 The rack of ribs was quite large and delicious (with the addition of extra sauce).  We were not given a choice of type of Bar-B-Q we wanted -- dry rub, mild, spicy.  But that was OK; we were happy.  The ribs were served with a garnish of coleslaw and one side.  I opted for a side salad and Ken ordered the sweet potato fries.  (Most of the sides were included in the price of the ribs but there was an extra charge of 99 cents for each of the sides we selected.)   And, we each had a 16 ounce beer for just $2 each.  We thoroughly enjoyed our dinner and had enough left over for dinner another night at home. 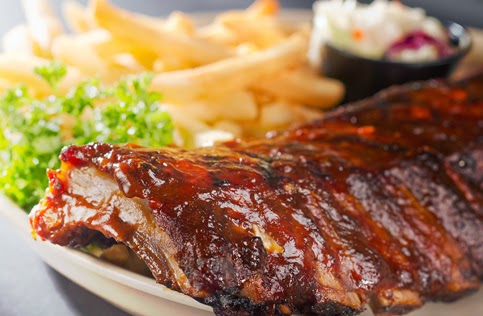 On Thursday nights Miller's Ale House has a prime rib special.  Since we were favorably impressed with our rack of ribs dinner, we will likely give the prime ribs special a try when we get back to TT Orlando.
Posted by Highway Runner at 10:15 PM No comments:

Tue, Oct. 28 - We called Barb and Mitch a couple of weeks ago to talk to Mitch about the Michelin FMCA Tire Advantage Program because we knew they had bought motorhome tires under that discount program.  We discovered they had been traveling extensively and were now in Texas.  They said they were going to be at TT Peace River at the same time we would be there.

I called them again this afternoon to see if they were still at Peace River and let them know we were coming in today.  Barb said they were still there but leaving the next day.  She immediately invited us to come over to their rig tonight for dinner!!  How nice!!  That's just the type of people they are!!

Mitch is a Chef by hobby and loves to cook.  He prepared a delicious Chinese pork dish served over brown rice!!  Wonderful!!

As we were finishing dinner, other friends, Rich and Dee came by to say "Hi".  They had heard we were in the park.  We were surprised to see them because the last we heard, they were still out West!

It was so much fun to get together with these pickleball friends again!! 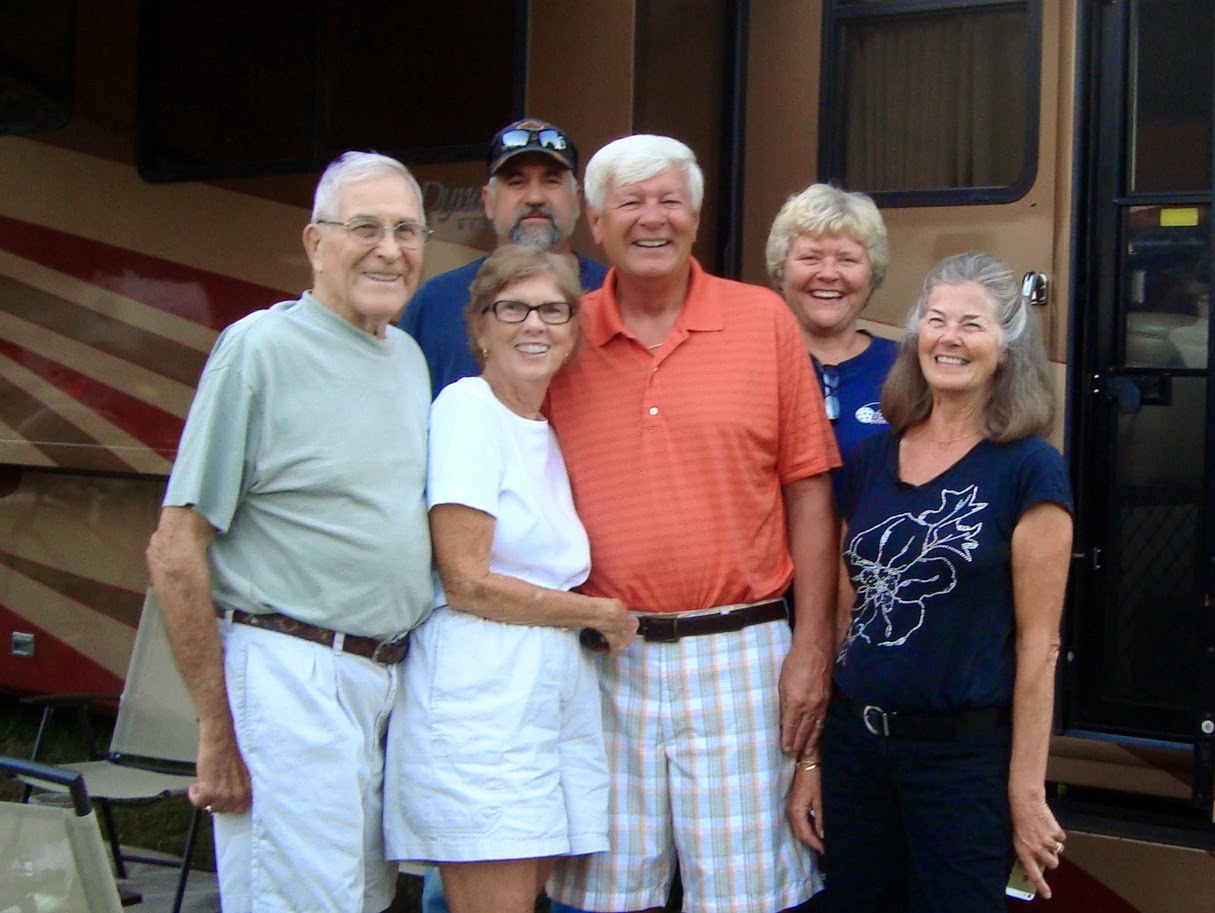 Thanks so much Barb and Mitch for your hospitality!!!  Keep on having fun and we'll see you again soon!
Posted by Highway Runner at 10:14 PM No comments:

FUN WITH OUR TORREY OAKS FRIENDS!!

Mon, Nov. 03 - We are now at TT Peace River in Wauchula, FL.  We knew that Joe and Cis (PA) were planning to be down at their RV site in Torrey Oaks, about five miles up the road, on Monday.  So I called and told them that Ken would be cooking up some of his Chile Soup on Monday and we would like to bring it by and share with them for dinner, if they were available.  She said they would love that, and she said that mutual friends Stan and Sally (MI) were also arriving at Torrey Oaks on Monday.  So, we called and invited them to join us for dinner, too.  It was so great to get with these friends again! 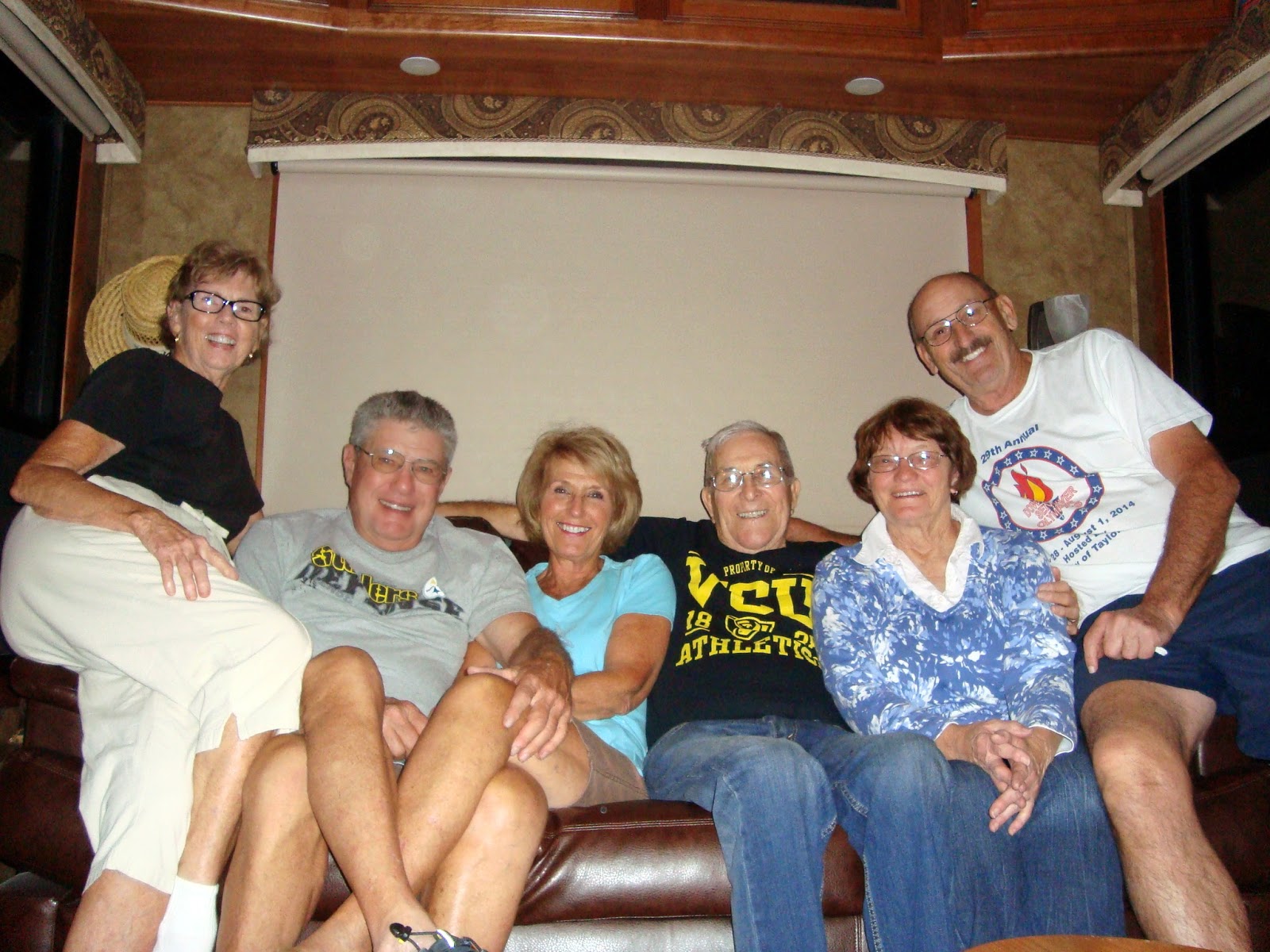 Thur, Nov 06 - We joined friends Sally and Stan and Cis and Joe at Paul's, a local restaurant favorite here in Wauchula, FL.  And Paul's does offer a great meal for your money!!

A picture of my calf's liver and onions with rice and green beans.  And you don't even see the chicken and rice soup, salad, bread, mashed potatoes and gravy, and cup of hot coffee!!!  All for less than $10!!  Do you wonder why Paul's is a favorite!!?? 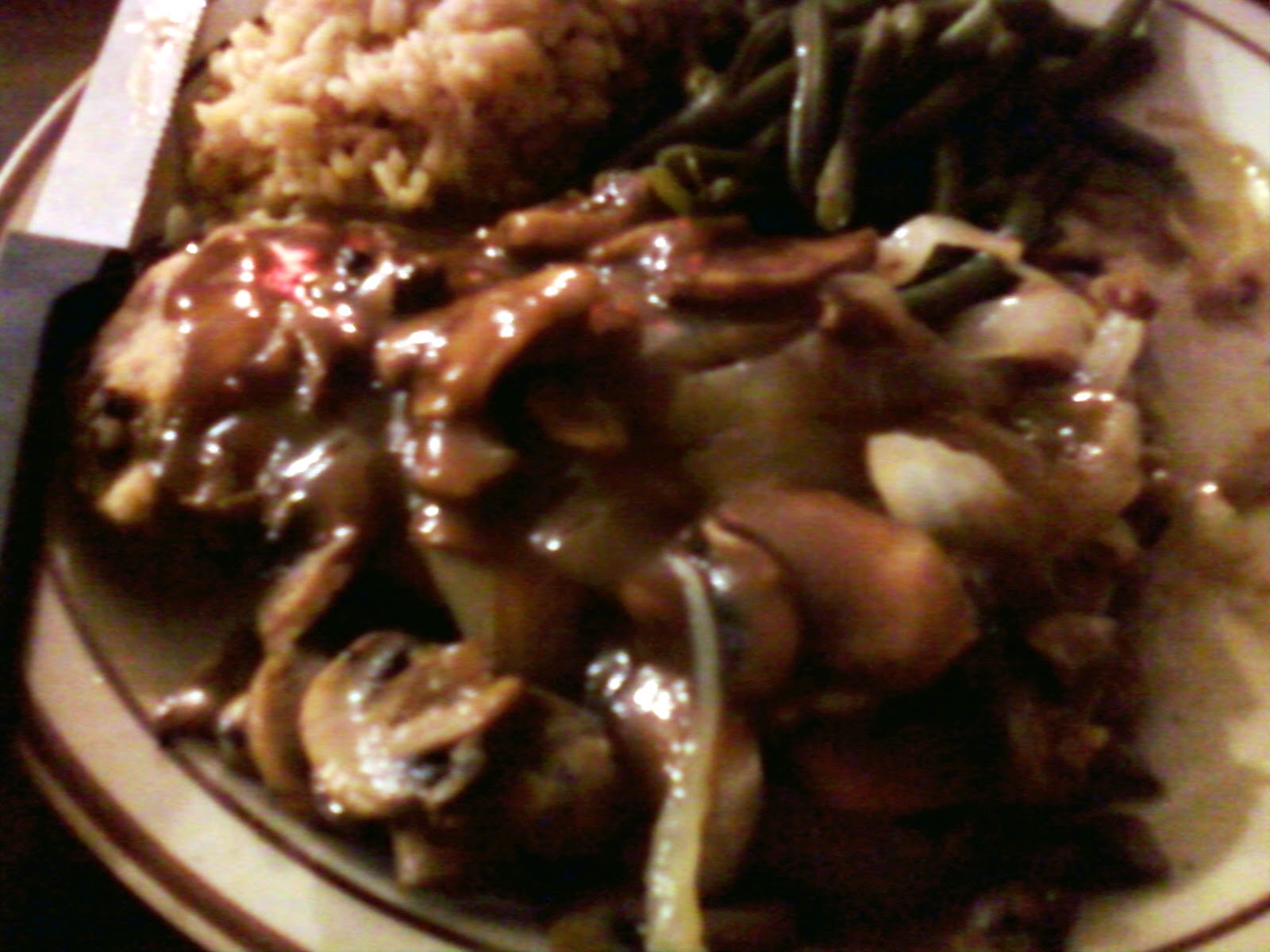 Here's the group around the table after enjoying our dinner.  Joe, Sally, Stan, Faye, Ken and Cis. 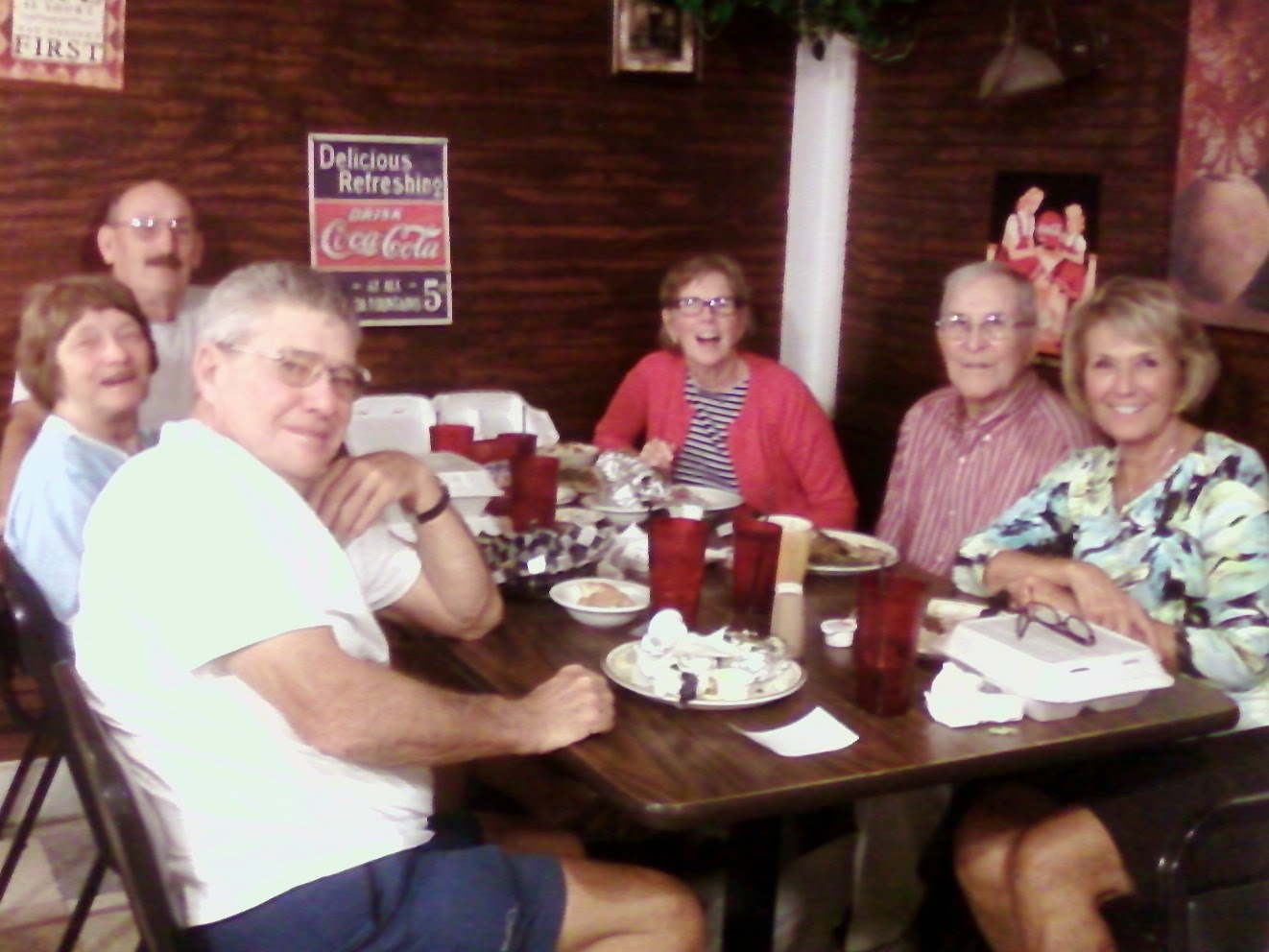 Posted by Highway Runner at 10:13 PM No comments: