ADDENDUM TO: OUR "WEEK OUT" IN PRESCOTT, AZ

4th of July - We were still in Prescott on the Fourth of July, so we celebrated with Ofe and Chuck and friends of theirs. We had Hamburgers, Hot Dogs and Corn-On-The-Cob at Ofe's home followed by home-made Ice Cream and Red Silk Cake, brought by her friend.

After dinner we drove over to a hill top in a residential neighborhood close to the Fourth of July Fireworks. A good location to watch the Fireworks. A number of other locals had the same idea. That was fun!!

There was thunder, lightening and heavy dark clouds all around us, but we lucked out. No rain over the Fireworks!! 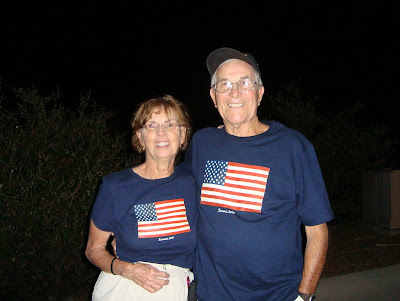 Thanks, Ofe and Chuck, for entertaining us royally during our week in Prescott, plus a very nice Fourth of July celebration!!
Posted by Highway Runner at 12:49 AM No comments:

OUR "WEEK OUT" IN PRESCOTT, AZ

June 28 - July 05 - Time for another week out of TT Verde Valley. This time we went only about 45 miles to Prescott, AZ (the locals say "Pres'cutt"). It's a beautiful area up in the mountains. We are actually in the valley -- Prescott Valley. We are staying the week at the Elk's Lodge which has about 12 sites with full hook-up. It is quite a nice set-up. (We're the coach at the far end.) 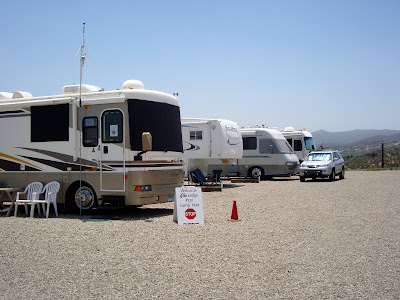 Our Pickleball friends, Ofe and Chuck, live in Prescott in a 55 Plus mobile home community in the middle of a National Forest. The area is really nice and their home is beautiful!! Ofe and Chuck invited us for a morning of Pickleball, followed by Mexican lunch of tacos with Ice Cream for dessert. It was a lot of fun!! 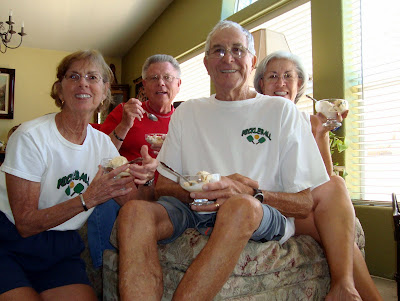 In fact, we enjoyed it so much that we went for more Pickleball the next morning. 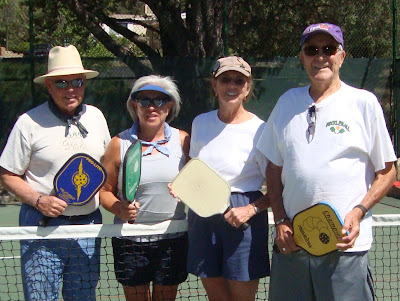 They have solved the problem of too many players and not enough courts!! They play with three on each side!! They have tweaked the rules a bit to accommodate six players. For instance, each team only gets one serve. The server serves until he looses serve, but always serves from the right court. When he looses serve, the other team rotates players and serves (the previous server moves to the center, the center player moves to the far left, and the left player moves to the service position). They usually play that the two outside players get to net while the center player stays back. It was different!! And fun!! 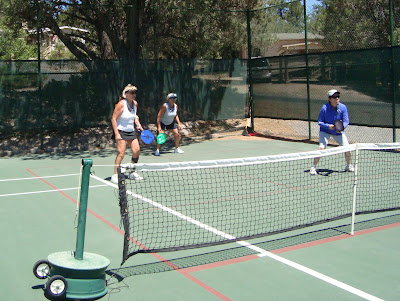 Ru and Pickleball players at TT Chesapeake Bay, notice the net pole stand above!! The wheels make it a lot easier to move for setting up and taking down!! They painted narrow red lines to mark off the Pickleball courts at each end of the tennis court. 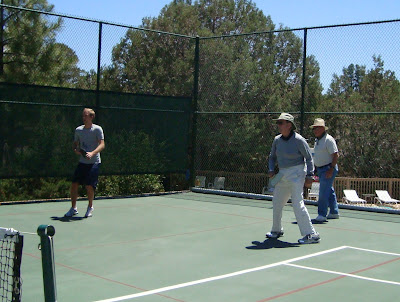 It was great seeing Ofe and Chuck again. The plan is to tailgate with them for 4th of July Fireworks.
THE WORLD'S OLDEST RODEO, PRESCOTT, AZ
On Friday night we went to the World's Oldest Rodeo. We waited too late to buy our tickets and did not have much selection. We could have sat up high but at the extreme ends of the arena. We chose the Arena Section, more in the center and closer to the action. I asked if there was anything to block our view!! She said, No, nothing to block our view!! 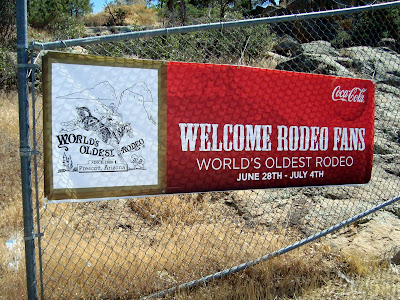 Well, not if you don't count the chain-link fence, the white fence, the red fence, and all the advertisements!! HA HA!! Anyway, it was a beautiful evening and we were close to a lot of the action. All of the riders entered and departed through the gates to our left! And, the area behind the rider without a flag was the Roping Chutes for Calf Roping and Team Roping. That was exciting!! Unfortunately, all of the bucking events - Bareback Bronco, Saddle Bronco, and Bull Riding - were closer to the other end of the arena. But, thinks to the big screen across from us, we could see all the action up close!! 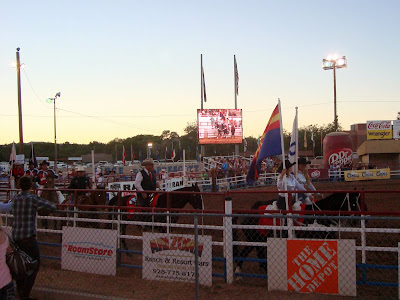 There were numerous participants in the Opening Ceremony! 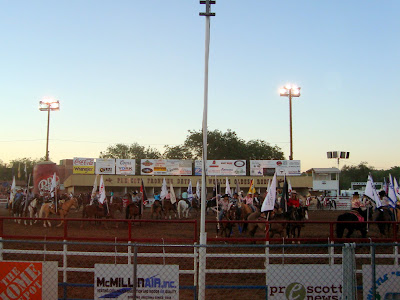 The presentation of the Flag! 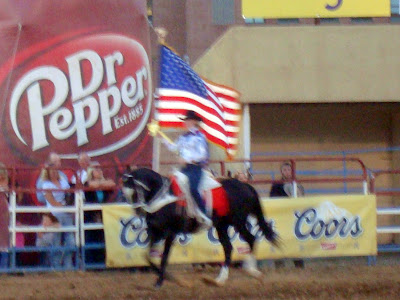 It was a most enjoyable evening at The World's Oldest Rodeo!! A very special event!!
Posted by Highway Runner at 12:28 AM No comments: