Nov. 2 - Tonight was the last regular season football game for Hilltop High School where Ken's grandson, Russell, plays Defensive Tackle for the team!  In fact, except for the play-offs, it was Russell's last high school football game!

Tonight was Senior Night and all the Seniors on the football team, cheerleaders, band, etc. were honored.  We wanted to be certain to be there.

Before the game, the Senior football players gathered at one end of the field.   There were a lot of them!!  (The other Seniors were honored during half-time.) 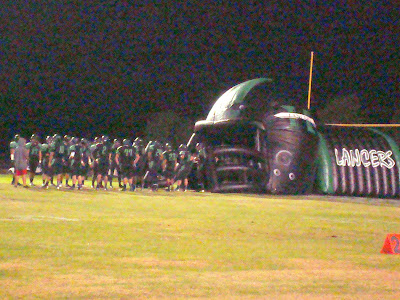 As names were called, the Senior walked down the field to meet his family representatives who waited at the 50 yard line.  Russell was the last name called because of his jersey number 99. 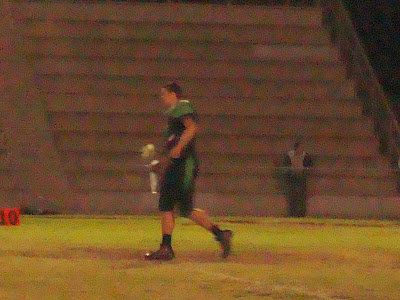 As each player walked across the field, the moderator read comments that the player had written for his family.  As Russell met his proud God Parents, his words of thanks for their support through the years could be heard over the loud speakers.  I was teary-eyed. 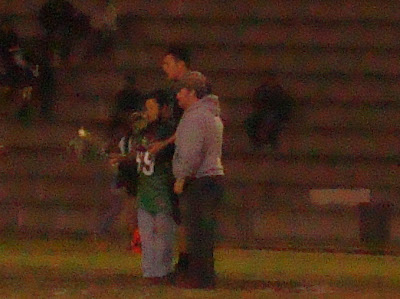 This picture shows the offense on the field.  The defensive team is on the sideline.  Russell can be seen with his back to us.  Number 99 is just in front of the orange water jug.  Hand on his hip, as always!!  It's usually both hands on his hips.  That's how we recognize him among the other players on the sideline. 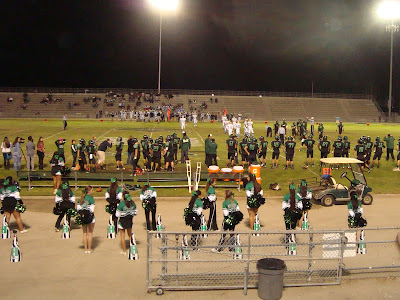 The Hilltop Lancers won the game handily.  Russell's position is just a little left of center, and he is in on every defensive play.  Have to tell you!  The grandparents dream come true!  It was one of the last plays of the game.  The Lancers held their opponents down near their own goal line.  Fourth down, the kicker punted!  Russell reached up, blocked the punt, and fell on the ball in the end zone!!!  Touchdown!!!

Proud grandparents with the VIP of the game - at least as far as we are concerned! 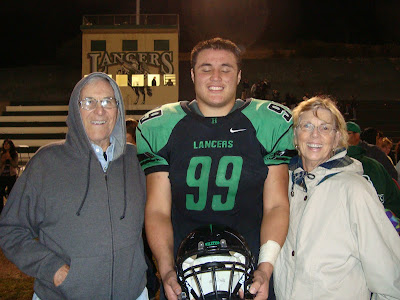 (I apologize for the quality of the pictures.  There must be a setting for night time photography but I did not have time to find it!)

Nov. 2 - On this Friday evening, Ken's grandson Russell, was playing in his last regular season football game at Hilltop HS in Chula Vista, CA.  We drove down to watch the game (See Article about Russell's Football Game.)

I had discovered that this is the time of year that Monarch Butterflies migrate to California where they hibernate for the Winter.  I always thought they went to Mexico but it turns out that only those Monarchs that live east of the Rocky Mountains migrate to Mexico; those that live west of the Rockies migrate to the Eucalyptus trees in southern California.  Strangely enough, Monarch butterflies use the very same trees each and every year when they migrate.

The article explained exactly where to go on the UCSD campus.  "The monarchs are located in eucalyptus trees along the blue screen art sculpture." 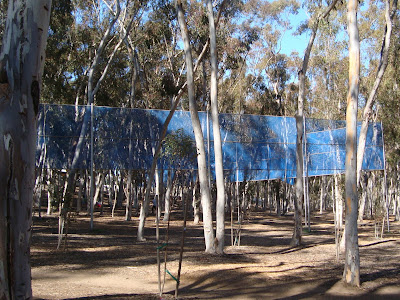 I searched and searched the Eucalyptus trees and did not see a single butterfly! 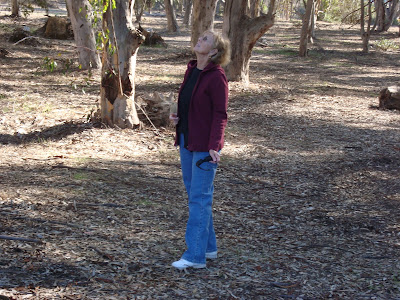 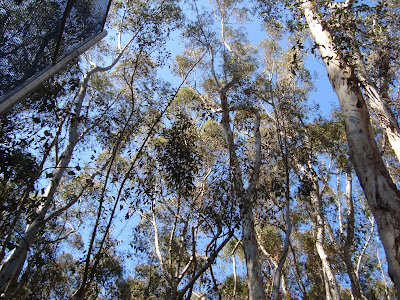 Then I spotted a group of students and their leader looking up into the trees.  I approached them and asked if they were looking for the Monarch butterflies.  They were doing something else and knew nothing about the butterflies.  I told them about the 4,500 Monarch butterflies that were supposed to be roosting in their Eucalyptus trees!!  "We have not seen any," they said.  And then suddenly:  "There's one!!"  "There's another one!!"  There's one over there!!"  I still could not see any!!  Then I was able to see a very small one, but it appeared to be a dark color.  I thought they were yellow.  How disappointing! 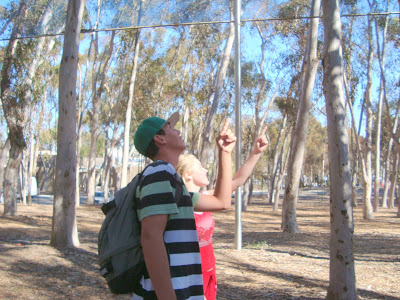 I searched a little longer to no avail.  Then, as I was making my way to the car, the most amazing thing happened!!!  A single butterfly flitted around my legs and landed on a piece of wood right in front of me!!  I took a quick picture. 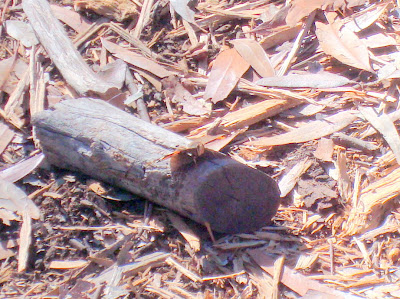 The butterfly flitted around a little more and came back and landed in front of me again!!  How amazing!!  It's not yellow! 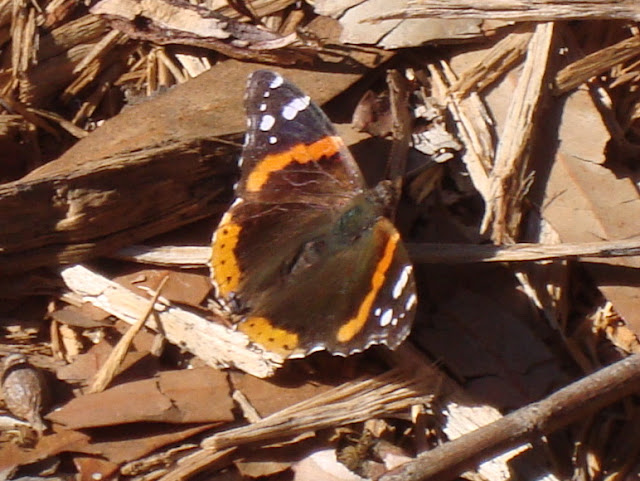 Of course, I've seen more and larger butterflies than this one, but this one was out in the wild!!  Not in a butterfly garden!!  I was thrilled!!

We started to drive to the second Eucalyptus grove a few miles away, but realized we needed further directions; besides we had to take a pit stop.  We went to the reception desk of the nearby Residence Inn.  The clerk at the desk gave us a map and directions.

Believe it or not, there were fewer Monarch butterflies at the second location.  But, I was impressed with the size of the Eucalyptus trees!! 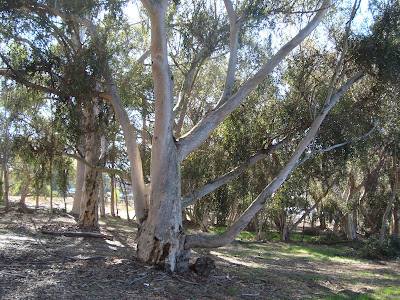 This is what we expected to see!!  HA HA  We'll have to try again later in the season. 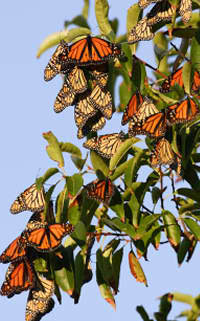 Anyway, the map that we picked up at the Residence Inn had an advertisement for "The Best Fish Tacos In San Diego", Wahoo's Fish Taco.  That is where we needed to go!!  The clerk had given us directions, so after failing to find the butterflies, we headed for the Fish Tacos! 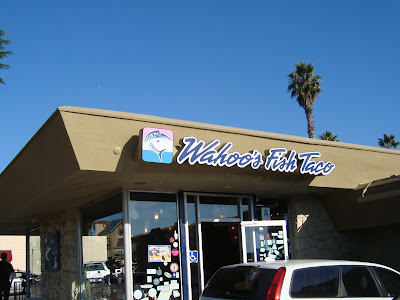 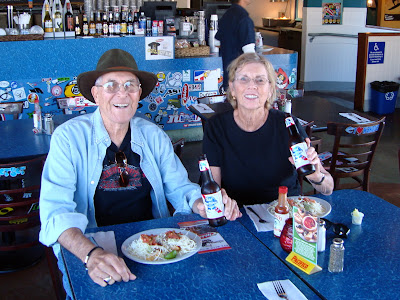 The fish in the taco was Wahoo and it was delicious.  We each had two large tacos with large pieces of Wahoo.  Since the tacos had double tortillas, we divided the tacos and made four tacos apiece!!  Actually, I would have preferred my fish fried, but I don't think they have anything fried in La Jolla!! 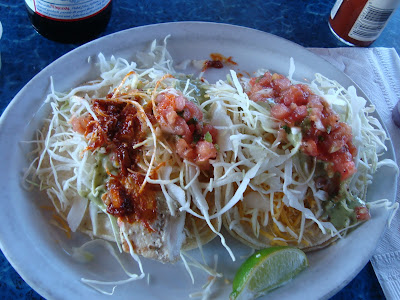 Wahoo's Fish Taco is a small chain in California.  We can definitely recommend the fish taco and beer of the month, if you run across one of the restaurants!!!
Posted by Highway Runner at 2:31 PM No comments:

Nov 1 - We have a lot of Pickleball players over at TT Wilderness Lakes.  Some days we have three courts playing with a couple of players waiting to play -- 14-15 players!!  Great to see so much activity!!

Ken and I decided to have a Happy Hour on Thursday.  We were going to have it at our site, but then remembered we don't have an awning for shade, but we did have about a million FLIES!!  Decided Thursday morning to move the Happy Hour to the back room at the Adult Lodge.  Glad we did because it turned out great!! 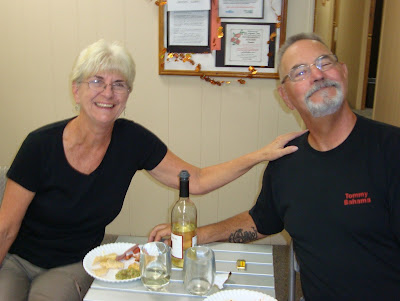 Jack and Sue, members of the 6 Pack, or 8 Pack or 10 Pack from the Phoenix area who travel together each summer!! 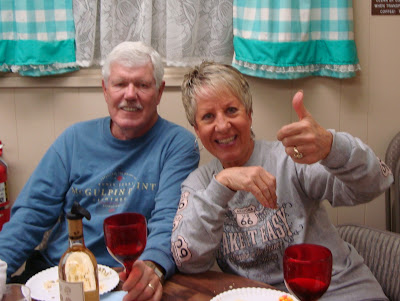 Jean and Don, members of the 6 Pack from the beginning about 7-8 years ago. 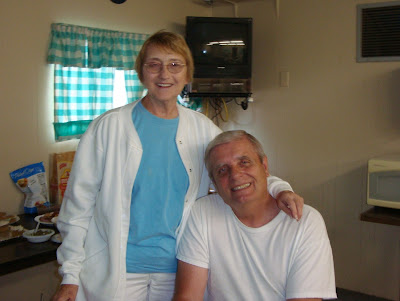 Last summer Trudy and Alan joined up with the 6 Pack, and traveled with them part-time!!  And here they are with them again.  I teased them and said that the 6  Pack just can't get rid of them now!! 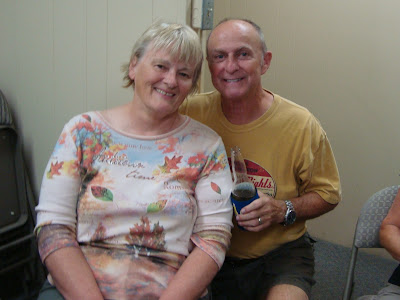 Sue and Larry.  Sue finally got Larry over to play Pickleball a few times. 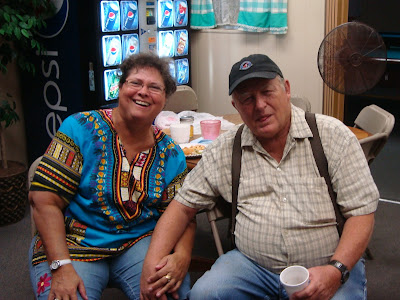 And, last but not least, Faye and Ken with Jessie! 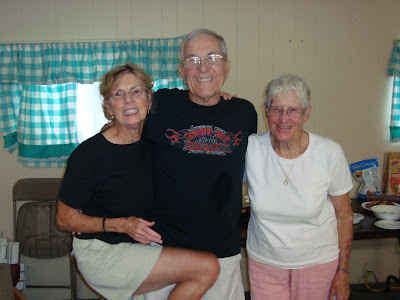 I wanted to do something on this occasion to remember the real Halloween (yesterday), because we,  at the campground celebrated Halloween with trick or treats last weekend.  So, I prepared a Pumpkin Dessert -- Pumpkin Pie Mix topped with yellow cake mix and chopped nuts.  Everybody loved it, even though I forgot all about drizzling the melted butter on top!!

Trudy with the Pumpkin Dessert topped with whipped cream and a couple of corn kernels. 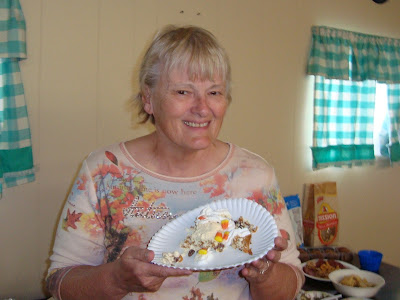 We all had a great time!!  Thanks everybody for coming!!

Posted by Highway Runner at 2:31 PM No comments: