VISIT WITH DAUGHTER, STASIA, AND FAMILY IN GOLDSBORO, NC

After visiting my son in Raleigh and making an exciting detour to Durham, we continued on to Goldsboro to spend the rest of the weekend with my daughter, Stasia, Gene and Michael. 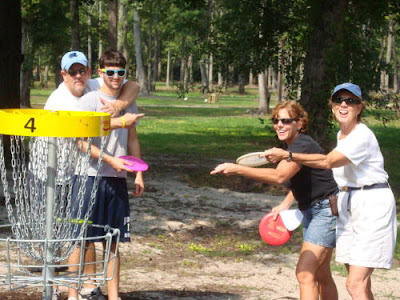 This was something new for us!! Stasia decided recently that since her younger son will soon be “leaving the nest”; she and Gene need some new hobbies. They decided to try Disk Golf and love it! She said Disk Golf is becoming the hot new thing with courses are being developed all over the country for the game; and tournaments being organized, etc. They took us to the course that is currently being developed in Goldsboro. It is only half finished at this time, but will be the longest course on the East coast!

There are nine goals of large steel baskets with chains on a pole placed at various points throughout the park (there will be 18 goals). The idea is to throw disks, like freezbees, toward the baskets, usually taking two tosses to reach the basket with the last disk going in. We all had a great time playing on Sunday morning. Unfortunately, I was a retard and had not a clue how to throw the disks and usually took about seven tosses, but it was fun anyway!! 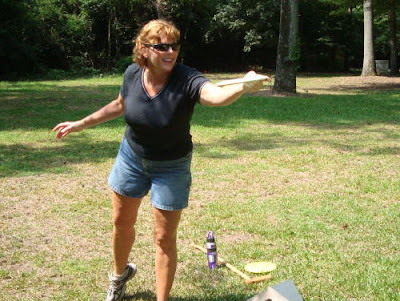 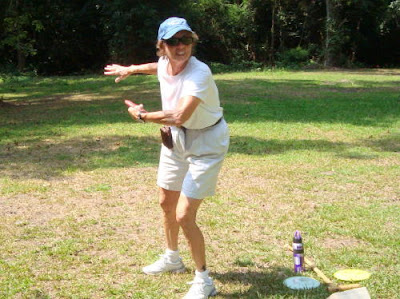 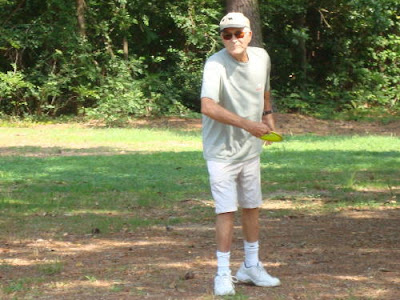 Maybe we can get a course going at some of the Thousand Trails Parks!! Actually, the goals could be set up as a bush, a tree, a fireplace, a stump, or anything around the campground. What do you say, Ru and Terry? How about setting up a course at Peace River, Stan??

A TATTOO FOR FAYE!!!

My grandson, Jason (Stasia’s son), lives only a few blocks from Barry in Raleigh, and he works at Kung Fu Tattoo in Durham. On Saturday afternoon I called him to tell him we were in town and would he like to jog over to say “Hi”. Bad news. He said he had to work on Saturday afternoon. “At the tattoo parlor?” I asked. “Can I get a tattoo this afternoon?” “Sure,” he said. “How long does it take?” “Only about an hour.” “How much does one cost?” “For you, it’s free, Gammy!”

So that’s how it came about! On our way from Barry’s place to visit my daughter, Stasia, Gene and Michael in Goldsboro, NC, for the rest of the weekend, we detoured to Kung Fu Tattoo in Durham!!! 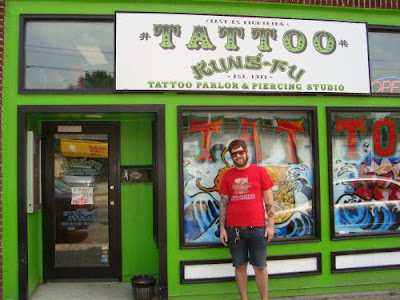 He took us inside, showed us around, and introduced us to a fellow worker. A nice clean shaven guy – I was almost ready to trade my grandson for him!!

I had told Jason on the phone that I thought I would like a butterfly tattoo. And, I love emeralds, so I’d like it to be emerald green, if possible. He showed me the neat design he had created and discussed the process of making and transferring the stencil, how they sterilize the needles, etc. Noticing a sign on the wall, Ken said, “You could have your “titties” pierced while you are here, Faye!” “Yes,” I replied, “and they can do my bellybutton at the same time since they hang so low!” The two young men laughed hysterically.

Here I am, ready for my procedure. Before he started, Jason surprised me when he said, “I’m so excited! And, I’m nervous.” I said, “I’m excited, too; but don’t you be nervous!!” 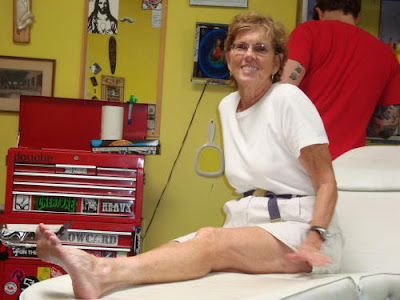 Beginning the tattoo. I asked Jason if they had marijuana for medicinal purposes. He gave me a stick of gum!! 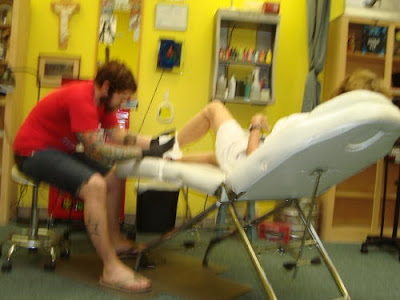 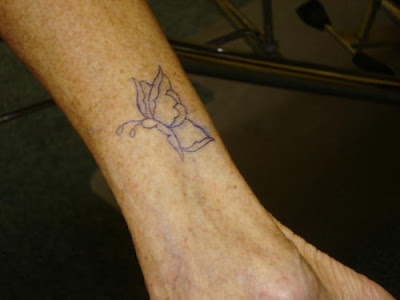 Now, we’re getting down to business! Ken asked if it hurt. Well, it’s not unbearable, but it’s not the most pleasant thing I have ever experienced, and I was really chewing that gum!! 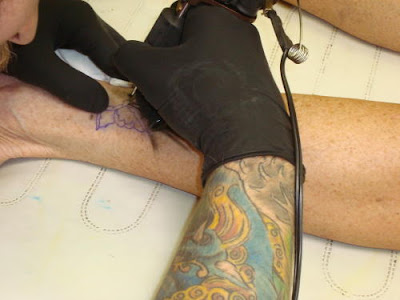 The finished product – a beautiful, exotic emerald green butterfly. And because Jason designed it, it is very, very special to me!! 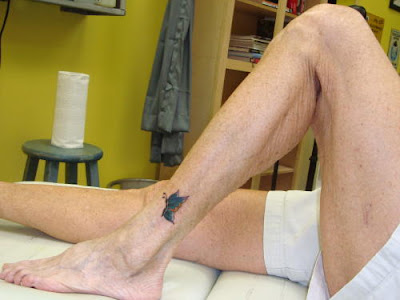 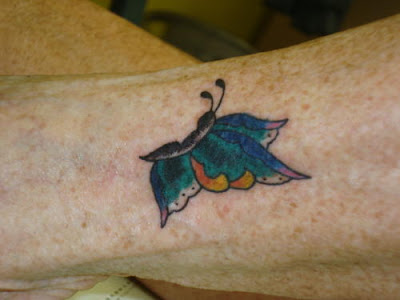 Thank you, Jason, for a great experience!! Love you!!
And, thank you, Ken, for letting me do such a wild and crazy thing!! 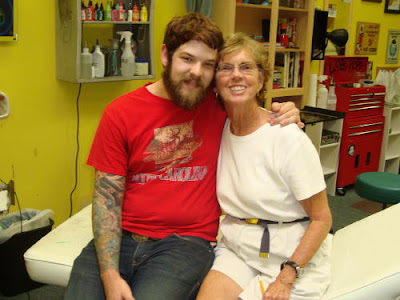 VISIT WITH SON, BARRY, AND FAMILY IN RALEIGH, NC

We finally had a break from doctors and spent a marvelous weekend in North Carolina visiting with my family. First, we went to Raleigh on Friday and Saturday to stay with my son, Barry, MaryAnne and Thomas. 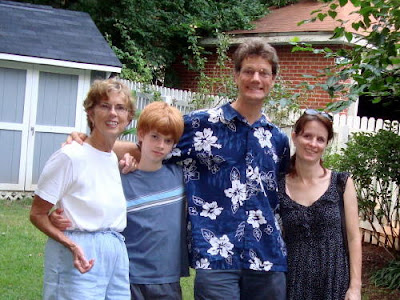 When we arrived, we found Thomas and a friend playing games on the computer. (Thomas is the red head.) 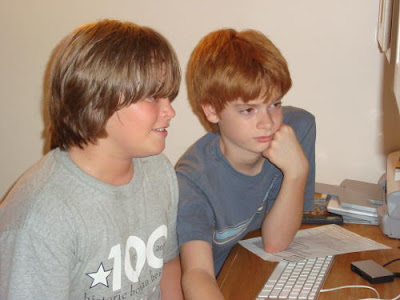 Last weekend, Barry and MaryAnne took advantage of “Cash for Clunkers” and traded their old ’93 Pathfinder for a new Pontiac Vibe. Wow. 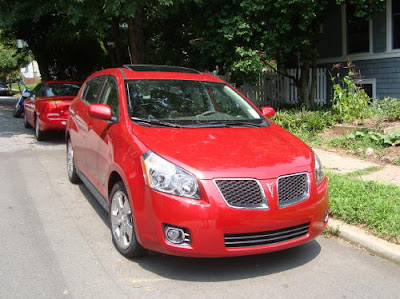 My how the baby chicks have grown. I think they have about six. They said the chicks have finally started earning their keep and they have not bought eggs in weeks. I love this picture!! 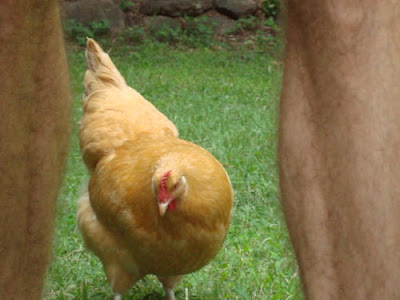 On Friday evening, we went out to dinner at 42nd Street in downtown Raleigh. 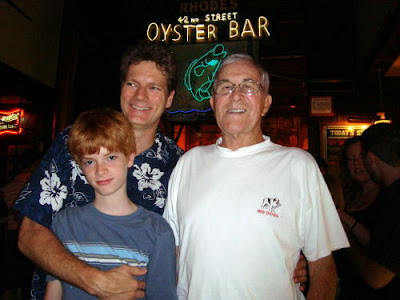 We all had delicious seafood dinners, except MaryAnne who ate tacos. I had great fried catfish; Thomas had calamari, and Barry and Ken had the chef’s special creation of blackened grouper over a bed of mixed salad greens. So sorry I did not get a picture of that unusual dish. But, Thomas did get pictures of signs he saw on the bathroom wall and thought they were worth memorializing!! 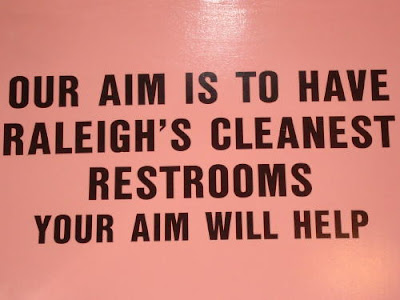 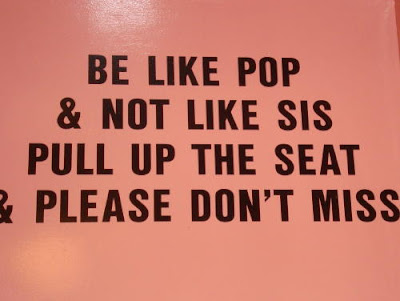 That's Thomas and Barry in the mirror! 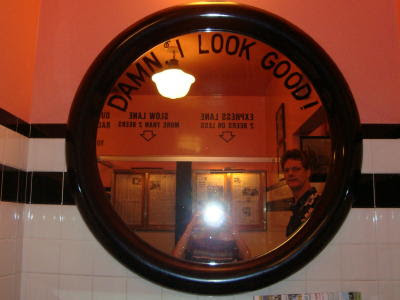 On Saturday morning, we drove over to a nearby park and introduced Barry and MaryAnne to Pickleball. They had never played before and it was a lot of fun to finally get them on the court to play. Forgot my camera again, so we took pictures in the back yard with our paddles. 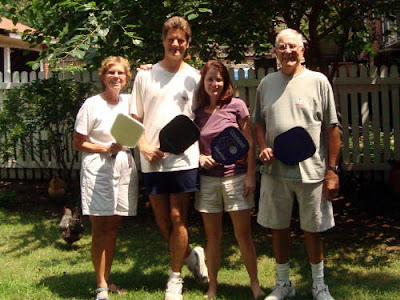 Here are Barry and MaryAnne, thrilled to be presented with official PICKLES!! 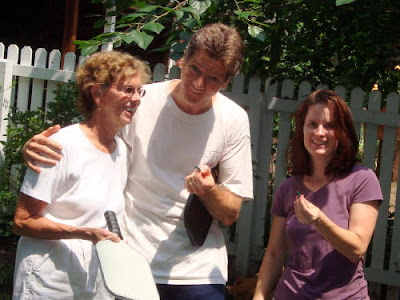 Posted by Highway Runner at 5:13 PM No comments: