Sat. Mar. 03 - We hosted a happy hour for the Pickleball players this afternoon. A week ago, we really lucked out when we came in to TT Wilderness Lakes. We ended up with a huge beautiful site - the perfect place for a happy hour or a pot-luck, or something. But then it rained. It poured! Our site was completely flooded for several days, and I forgot all about having a happy hour or anything! 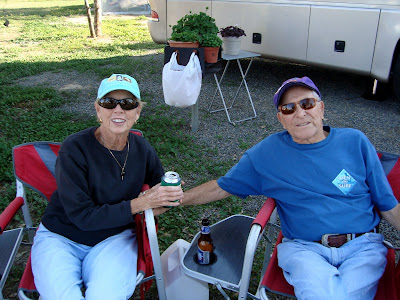 Yesterday, Tom was just kidding me and asked why I had not had a happy hour? or planned an eat-out somewhere!! It sounded like a good idea to me, now that our campsite was dry! So that's how the happy hour came about! The thing is, Tom and Marge are leaving on Sunday and I discovered several other Pickleball players were leaving either on Sunday or Monday! We had to do some really quick planning!! With the help of other players we were able to get in touch with almost everybody, and we had a great turn-out!
Tom and Marge. 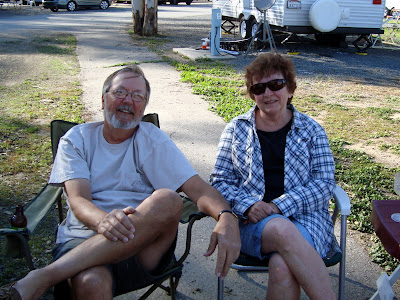 A couple of the guys were playing in the Pool Tournament this afternoon and would be late. Here are the Pool Widows, Jeanie and Sis. 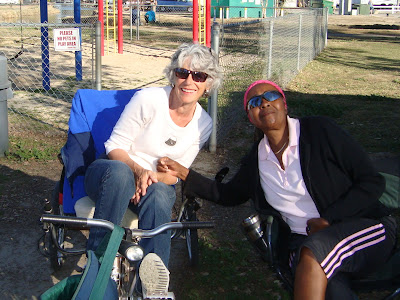 But the husbands did arrive in plenty of time. Paul and Sis. 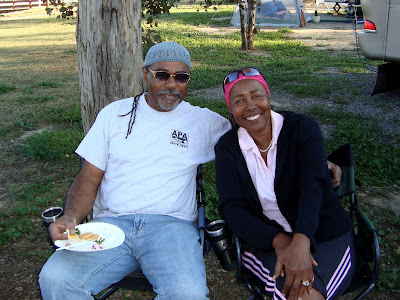 Jeannie and Ray on their "bikes" - the kind you sort of lay back on and paddle. They work pretty good as chairs for happy hour, too! 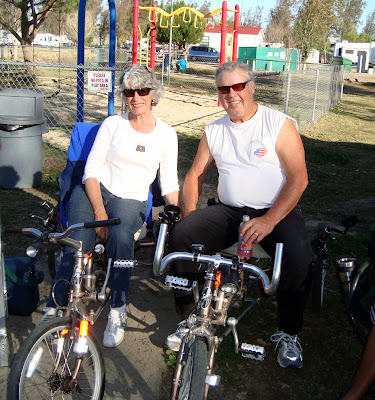 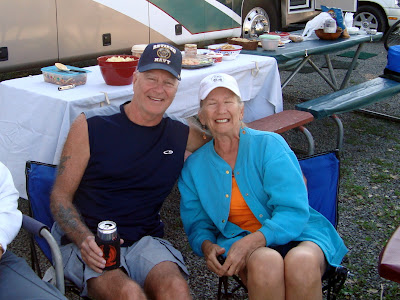 Judy's husband, Bert, was having back problems and could not come. Anne was Judy's date for a while! 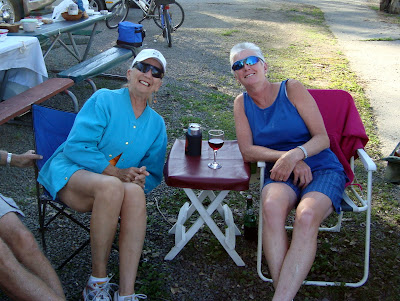 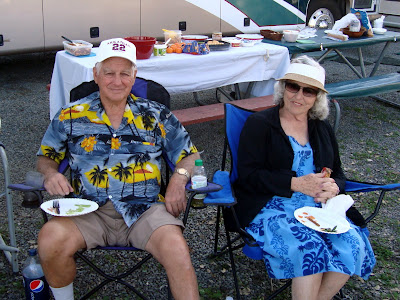 New Friends -
Joe and Barb have been on the courts every morning. Really good players! This afternoon I asked Barb where they have been playing, because I have not seen them around the TT parks where we play. Her answer surprised me! She said they have only been playing for a couple of years; started playing at TT Chesapeake Bay!!! (Our home park where WE got Pickleball started a few years back!!) Small world!! 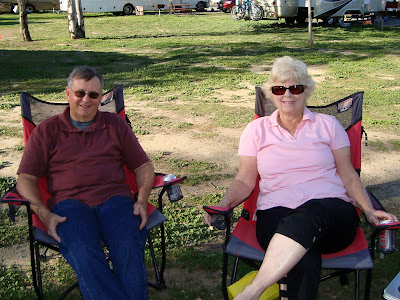 Max and Dave. Met Dave on the Pickleball courts this week here at Wilderness Lakes. Good player! Notice his "wine" glass. It's a mason jar on a stem!! The jar even has the screw-on top to keep the wine from spilling!! I heard him say you could go on line and find out what type of epoxy to use to glue the stem to the glass! Interesting!! 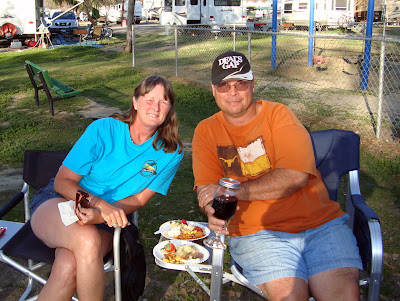 * * *
Ken, Paul, and Dick!! Two hundred and forty years among them!!! Ken is the baby!! Glad we are not all that old!!! Discovered Paul and Dick were born in the same hospital in New York!! And now they are both out west, RVing and playing Pickleball!! 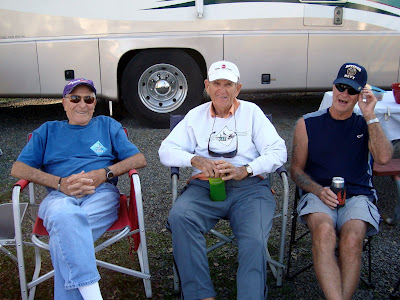 This is interesting! Paul was showing us his tennis shoes; how his foot doctor had built up his Court Classics ($15 at Costco). He said the doctor liked working with the Court Classics best because they have rubber in them, or something like that. We had never heard of such a thing.
Ken compares his Court Classics with Paul's. Notice how Paul's sole is much thicker! 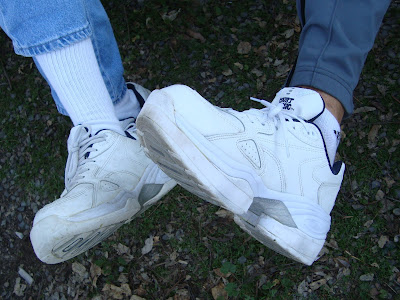 It was an absolutely beautiful afternoon for the happy hour. It was lots of fun!! Thanks, Tom for suggesting that we do it!! And thanks everybody for coming on such short notice!!
See you on the courts!!
Posted by Highway Runner at 11:23 PM No comments: 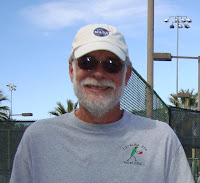 Pickleball players at TT Palm Springs and Catalina Spa have probably noticed that Dennis has not been on the courts for the past few months. That is because Dennis has been suffering with frequent intense pain in his forehead caused by an artery pressing on a nerve. The problem was diagnosed as trigemital decompression, according to Barb.
It took quite a while for everything to be aligned before surgery to be performed.
Barb called on Thursday to say that Dennis had his surgery on Wednesday. In spite of the fact that the problem was far worse than anticipated (the artery had actually started to bury itself into the nerve), the surgery had gone really well. In fact, Dennis felt so good afterward, he said he was ready to go home!! Way to go, Dennis!
Dennis and Barb are currently at Catalina Spa. Look for him back on the courts real soon!!
Posted by Highway Runner at 12:07 AM 2 comments:

PICKLEBALL IS ALIVE AND WELL AT TT WILDERNESS LAKES!

We are spending a couple of weeks at TT Wilderness Lakes. Of course, we spend almost every morning over at the Pickleball courts. There are now four courts here, but unfortunately, two of them have shadows from the trees and most of us prefer to wait our turn on the sunny courts to playing on the shaded courts!!!
It is so hard to get and edit action pictures that I decided to take group pictures. I discovered that is even harder because courts rotate and players get all mixed up, etc. etc. etc!!! Anyway, I think I got pictures of most of the players here this week. (Hope the names are correct!!)
Tom, Bill, Clint and Dave. Caught them coming off of one court! 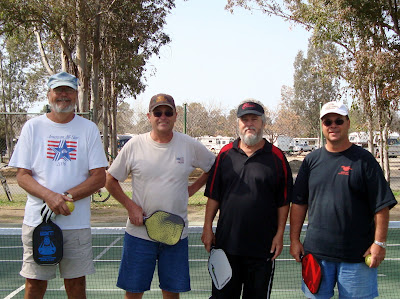 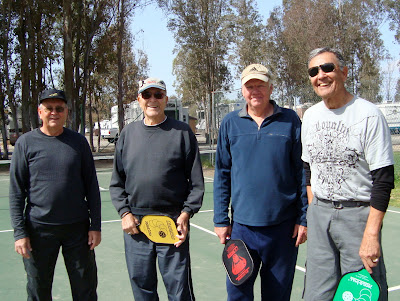 The girls are much more cooperative in posing! Barb, Faye, Judy, Anne and Sis! We certainly look good!! I love the aqua intermingled with the white. What a coincidence!! 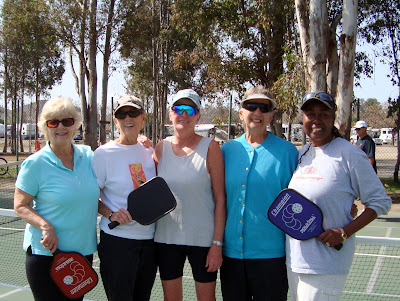 These guys arrived the next day! Jim J., Roger and Richard. 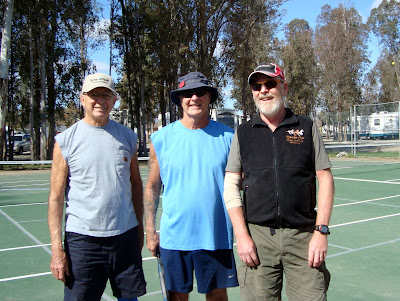 Ranger Al, here at Wilderness Lakes, is reluctant to have his picture taken, but the next day I caught him and new arrival Paul on the courts!! There is no escape, Al!! 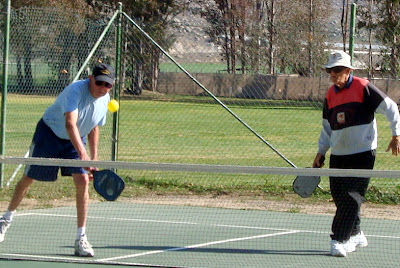 Dick (in red) just arrived, and I was finally able to get a picture of Jim P. at the courts. 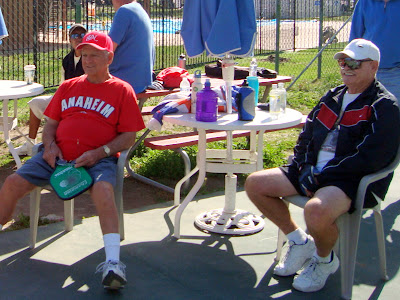 Sidebar: This is the first time we have seen Jim P's real nose at the Pickleball courts!!! Usually, he covers his nose with Zinc Oxide to protect pre-cancer cells from the sun. He told me today that his/OUR dermatologist Dr. Radentz told him about a magic cream they sell that heals the pre-cancer cells. Cost is $200 + but it works!!! The cream has cleared up places on Jim's head, his nose, and even more!! That's amazing!!!
Pickleball has been lots of fun at TT Wilderness Lakes!! See you on the courts!!
Posted by Highway Runner at 11:51 PM No comments: