Just in case you don’t already know. Google Information Number is the greatest! Just dial 800-466-4411. The automated operator will ask you for the name of the business and city and state. Then they offer to connect you or you may ask for details. Details give you the address and the phone number of the business. No Charge!!

We have used it to contact Pizza Hut in various towns, Wal-Mart pharmacies, etc. etc. And we used it today to contact Oakwood Smokehouse & Grill.

Maybe you’d like to give it a try.
Posted by Highway Runner at 10:59 PM No comments:

OUT FOR RIBS BECAUSE OF A COINCIDENCE

We moved this morning from TT Peace River to TT Orlando. We choose a site across from the Pickleball courts where a number of players were playing when we arrived. We recognized a number of them and they recognized us and waved.

After we settled in, Ken and I were talking about the Oakwood Smokehouse & Grill up in Clermont. We know that on certain days they serve a full rack of ribs for a special price. Ken said it was on Wednesday. But, I was not certain. So I used my Google Information Number to call Oakwood. The special is Sunday – Wednesday, all day, a full rack for $11.95. Today is Wednesday! We debated about going – we would really rather not go alone, but it was a little too late to invite anyone to join us.

We decided to go over to say HI to Dee and Rich who were parked nearby. When we opened the door, there they stood!! After chatting for awhile, they mentioned they were going out to that rib place for dinner. Hey! We were talking about going there ourselves!! May we join you?? And, so we all went to Oakwood!! 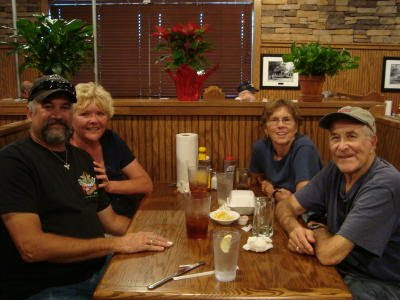 People who were at TT Chesapeake Bay for the Labor Day Pickleball Tournament will remember Dee as the Winner of the Women’s Tournament. They will remember Rich by his alias Peg because we had so many Riches. Others of you may also know Dee and Rich as really good Pickleball players!! And a lot of fun!! 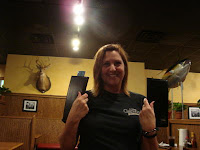 Our waitress, Karen. She was really cute and cut up a lot with us! Wants us to come back!!

Ribs and sides were great. Dee’s shrimp were so-so!! We’ll certainly go again and stick to the ribs.
Posted by Highway Runner at 10:49 PM No comments: 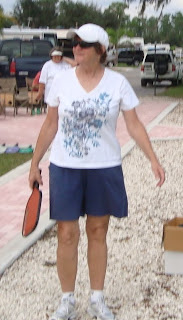 What FUN we had this afternoon!!
Sally is at it again. This time she planned a Pickleball social at Torrey Oaks followed by a Happy Hour!! She invited the Pickleball players from TT Peace River to come on over!!

There were some great matches, and some not so great! But who cares!! The weather was perfect for an afternoon of fun and everybody had a great time!!

SOME OF THE PLAY 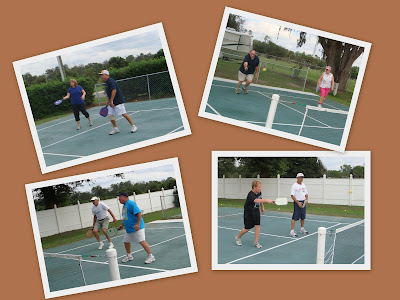 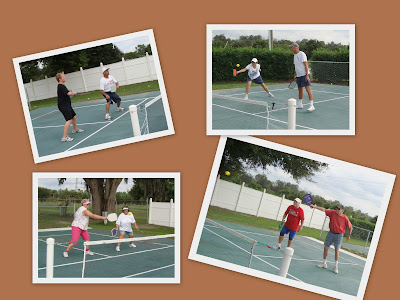 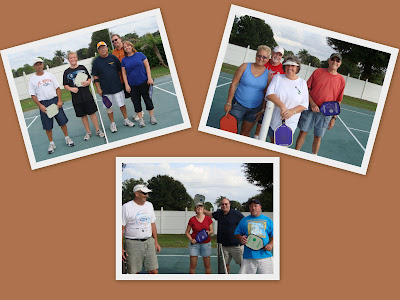 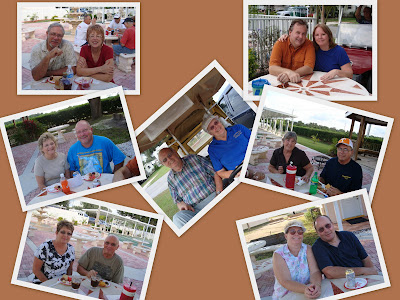 During the Pickleball social, Krystal told me that her son, Austin, thought I was really cool to have gotten a tattoo!! She said he wanted to see it.

Me showing Austin the butterfly tattoo! 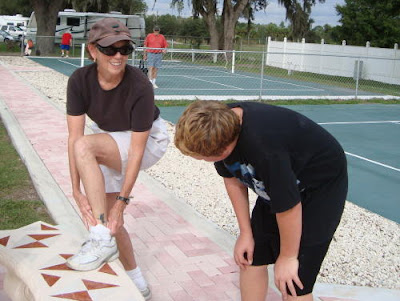 Later, when a group of us was talking, Austin revealed his paranoia about butterflies. Strange as it seems, Austin is afraid of butterflies!!! (Except, of course, my butterfly tattoo.)
Posted by Highway Runner at 9:30 PM 1 comment: