Diane and Mike are too good to us!!  During our stay at TT Chesapeake Bay, Diane let us use her bright red golf cart!! 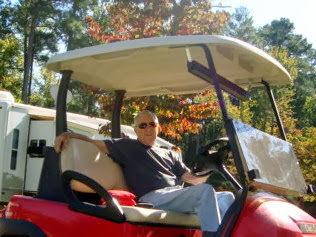 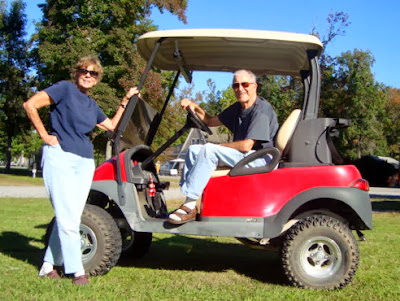 We had more fun riding around the campground!!  I thought this would be a good opportunity for me to show you around TT Chesapeake Bay.

Of course we drove the cart to the Pickleball Courts!! 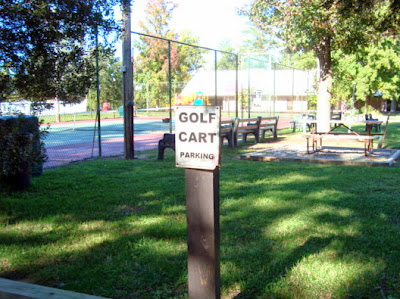 And we rode to the Store and to the Pavilion!!

Sometimes our trips to the Store was for a big Ice Cream Cone!!  UUMMM!! 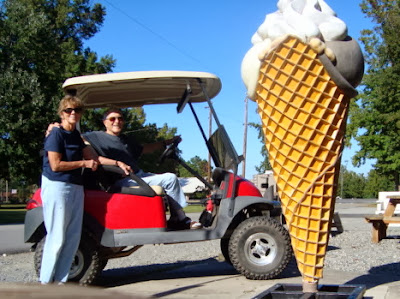 But it was not all fun!!  Sometime we had to take the Golf Cart to the Laundry!!  And to the Trash Dumpsters!

Back to the fun!!  We rode down by the lake 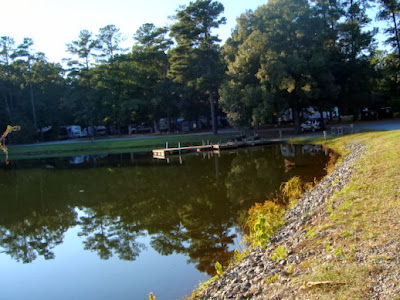 Down to Mike and Diane's site to play with their friends!! 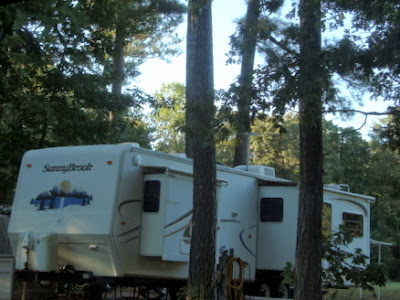 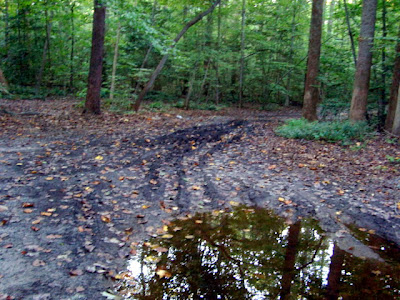 We took the Golf Cart down to the dock.  Beautiful! 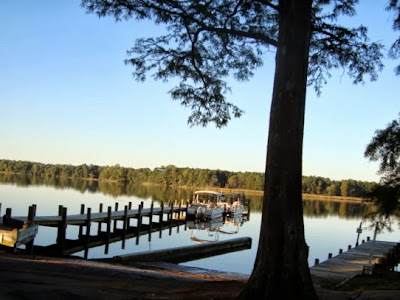 And along side the river! 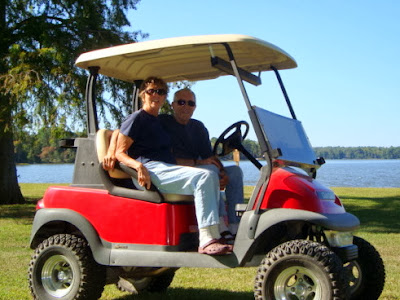 And several times to the Ranger Station. 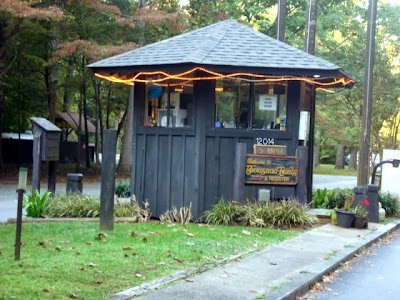 And we would always come back home!! 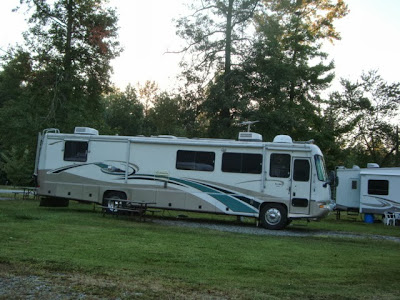 What fun!!  Thank you so much Diane and Mike!!

Fri and Sat, Sept 20-21 - I enjoyed a surprisingly delightful weekend at the East Coast Bluegrass Band Competition and Festival held at TT Chesapeake Bay --  known as "Bluegrass By The Bay"!! 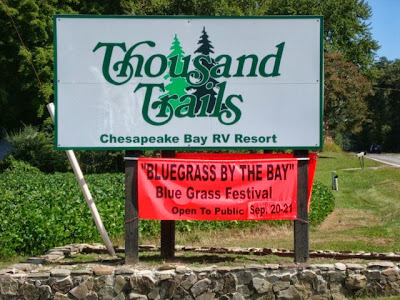 We were already camping at the Thousand Trails park; otherwise, I might have missed the whole event!  But, since we were right here, I decided to purchase a ticket for the weekend event, even though I'm a Country Western girl -- not really a Bluegrass fan.  But this was not your grandfather's Bluegrass.  This was more like the new Alan Jackson Bluegrass album!  Really fun!!

As a part of Bluegrass By The Bay Festival, the East Coast Bluegrass Band Competition was held on Friday evening.  (So sorry my pictures are of such bad quality.)

A local Bluegrass Band opened the program but did not compete.  The MC introduced the group as "a real legend, Ann West and her Saluda Playboys!!"  FYI, Saluda is a small town about seven miles from TT Chesapeake Bay, and we all know about Playboys!!  Right, girls!! 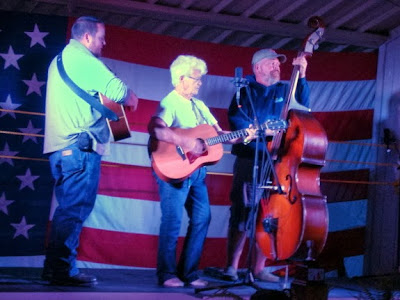 Seven Bluegrass bands competed.  Each group performed one vocal and one instrumental.  We in the audience were given one ballot on which we were to select only one band that we liked best.  There were also official Bluegrass judges whose votes counted as 50%, and the audience vote counted as the other 50%.

Sassafras Warthog was the first group to compete.  I thought they were very good, but compared to the rest of the competition, I rated them a 3 out of 5 (using my own scoring system). 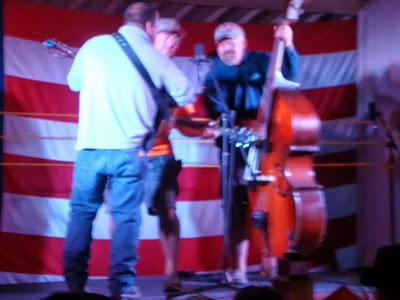 Next was the Blue River Band.  They same comment goes to them but I thought they were a little better, so I gave them a 3+. 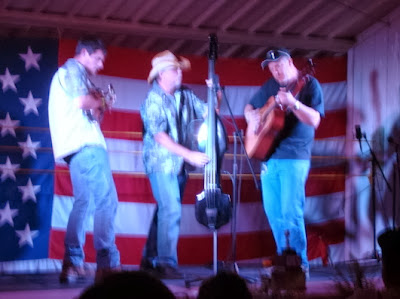 Hard Traveling Bluegrass Band was next.  I liked them very much and gave them a 4. 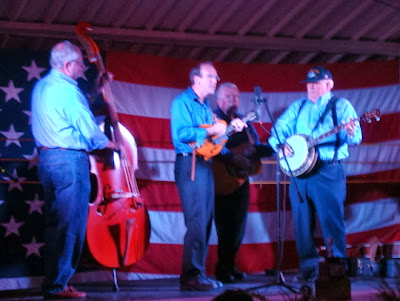 Hard Knox was very good. The first group with a female member.  They rated a 4+!! 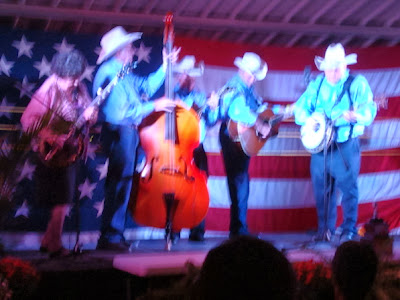 This is the group I liked best and gave them a 5+.  They were the only group that all dressed alike and looked more professional.  They also sounded great and had a lot of interacted with the audience.  I marked Old Dogs New Tricks on my ballot. 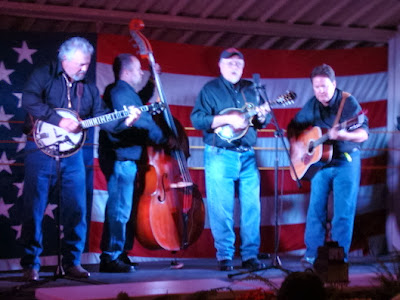 The last group in the competition was the Old Virginia Bluegrass Band.  They were very good, too and rated a 4+ from me. 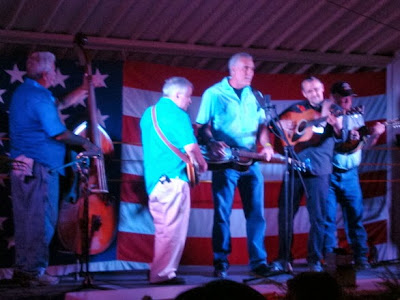 There was one more group that was scheduled to compete but they were delayed in Williamsburg and could not make it in time for the competition -- Amber Waves Band.  While the votes were being tallied, Amber Waves played for our entertainment.  They were amazing!!  The group is made up of Mother, Father, two Daughters, and one Son who played a mean fiddle!! 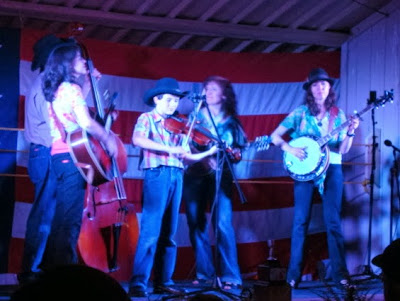 When the winner of the East Coast Bluegrass Band Competition was announced, it was the group I liked best, Old Dogs New Tricks.  We all laughed when the leader commented:  "The Good Lord must have caused Amber Waves Band to be delayed for a reason."  Here they are with the winners trophy!! 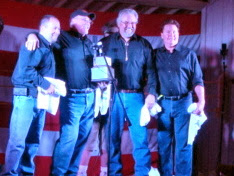 And that ended the Friday night activities!!

All Saturday afternoon, there was entertainment provided by five additional Bluegrass Bands.  This time the groups played for 45 minutes.  All of groups were terrific.

As the winners of the East Coast Bluegrass Band Competition, Old Dogs New Tricks was the only band from Friday night's performers that played on Saturday afternoon. 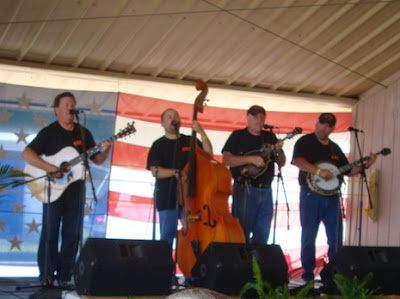 The second group to perform was the Willis River Band. 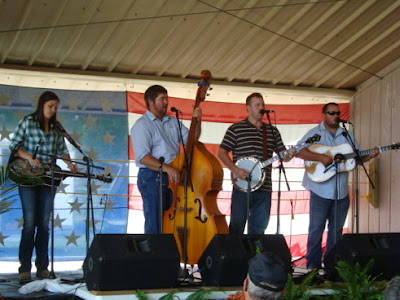 Followed by HWY 249.  The leader of this group (center) was the MC for the competition on Friday night.  Everybody in the audience seemed to know him, and the group.  [Sidebar:  The guy playing base with the cowboy hat on was so hot!!] 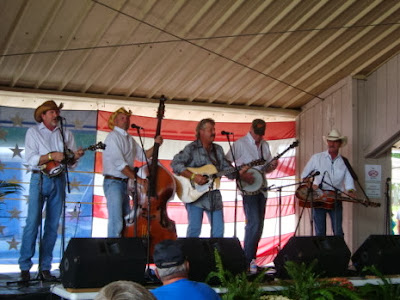 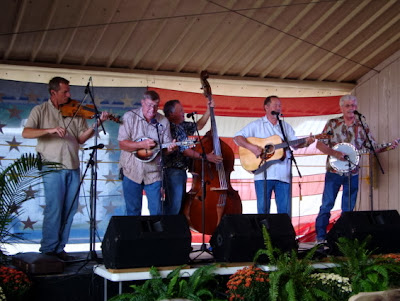 The last group to perform in the afternoon was The Bluegrass Brothers, a family group.  The leader of the group is in the center on base.  The banjo player far left is his younger son.  His brother is second from the left, playing mandolin.  The guitar player on the right is the leader's older son.  The only member who was not a family member is at the far right.  Fun group. 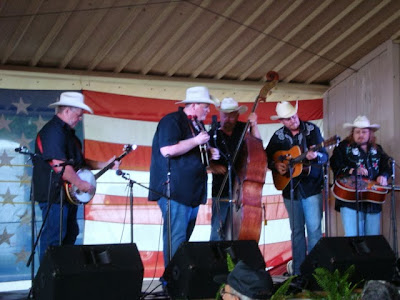 And then, as if that were not enough Bluegrass music for one weekend, the same five bands performed again on Saturday night.  By this that, everyone was relaxed and ready to have a rip-roaring time!!  That was so much fun!!