May 6 - Well we missed celebrating Cinco de Mayo by a day, but what a celebration we had on Friday!! We invited all the the Pickleball players we could find to come to our site at about 4 PM. Ken made Tacos and had pitchers of Margaritas flowing. I had made a Tortilla Soup. Everyone came bringing Mexican dishes to share with the group!!
We had a great time eating and drinking and talking and laughing. I brought out a CD I had created the night before using my Rhapsody and Audacity combination. It was Cinco de Mayo Party Music including The Mexican Hat Dance, LaBamba, LaCucaracha, Red Hot Salsa. The music raised the level of festivity even more!! Soon I was dancing the Macarena on the table!!
They made me do it. 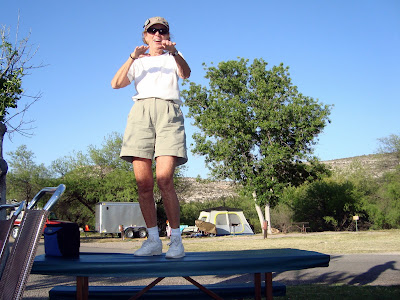 I, of course, wanted to take some pictures of everyone for the Blog, but wanted to make it fun. I noticed Trudy’s hat and thought it would make a great prop for the ladies to use but, first, it needed some decorating. Trudy just happened to have some red and green napkins in her car. She and Ella soon made the hat into a beautiful Mexican “sombrero”!! 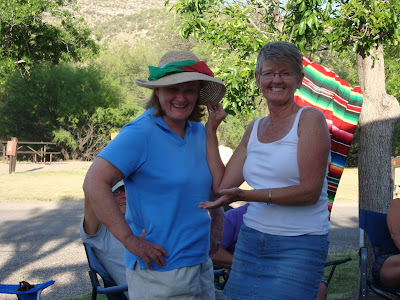 I announced that I wanted to take pictures of each couple for the Blog. They could do anything they wanted, but there were a few requirements: The ladies had to wear the Sombrero; the men had to throw the tea towel we had used to keep the tortillas warm over one shoulder so they could be Gauchos; couples had use the Maracas; and they had to stand in front of the Mexican Blanket as a backdrop! Sandy and Ed (from their experience in Mexico) said, “It's not a blanket; it's a Serape.” OK! They had to stand in front of the Serape!! The resulting pictures were terrific!!

Trudy and Alan are pictured first because she had the Sombrero!! 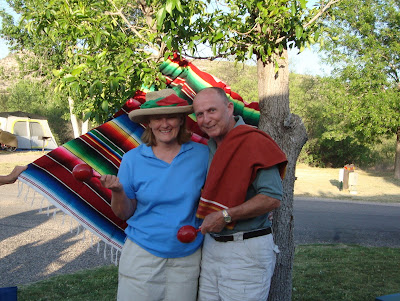 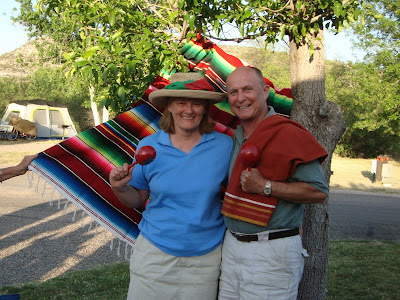 Anja and Ken cutting up! Ella is helping by stretching the Serape so it can be seen! 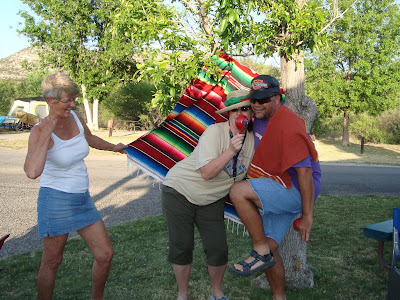 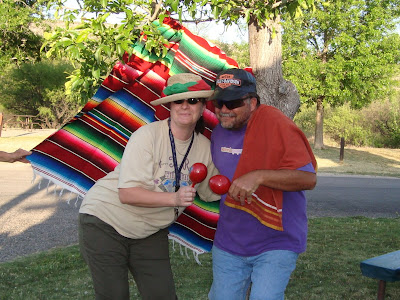 Merralee and Oland playing the Maracas! 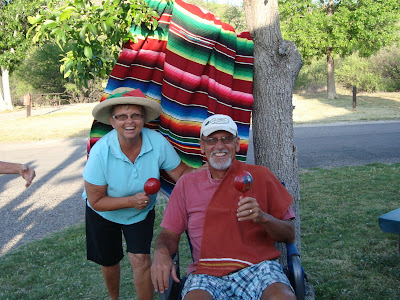 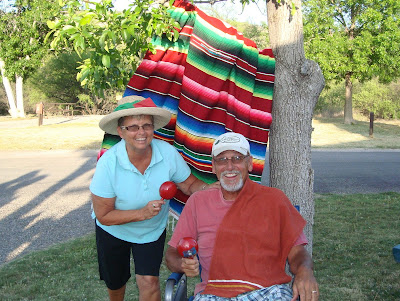 Ella and Will eating the Maraca!! 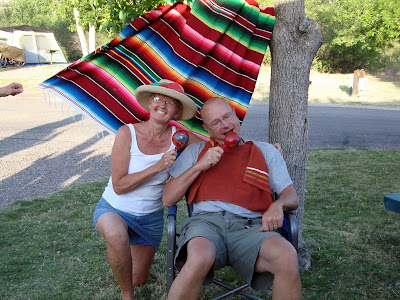 Will was so funny. He brought a beef barbecue to spread on crackers. He dubbed it "Steako de Mayo" in honor of the occasion. HA HA 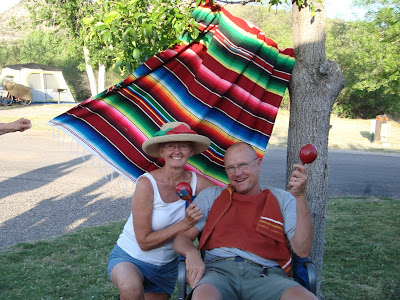 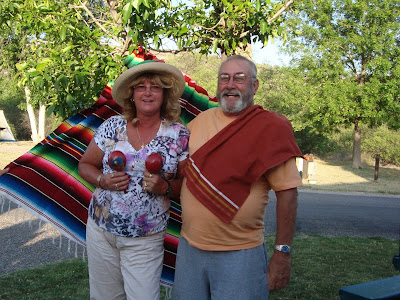 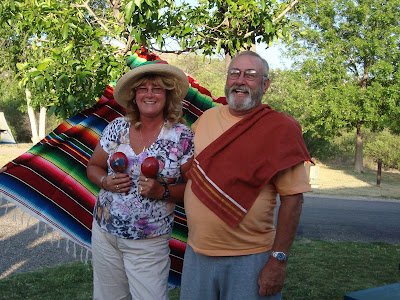 Our friends for years and years - Carolyn and John! 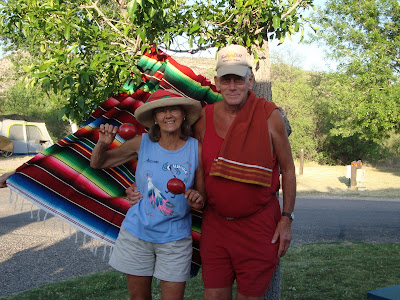 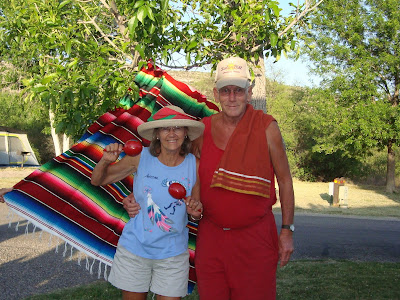 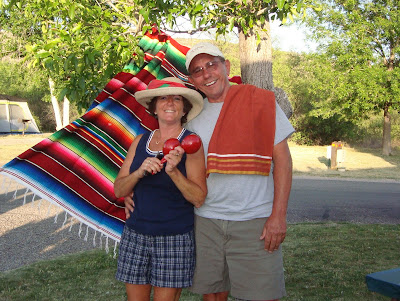 How sweet love is!! 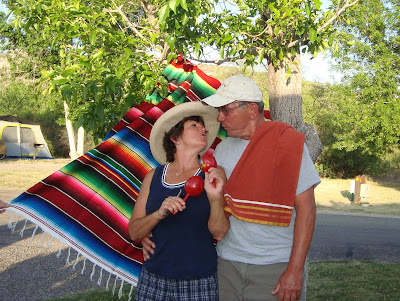 Sandy and Ed who knew about the "Serape"! 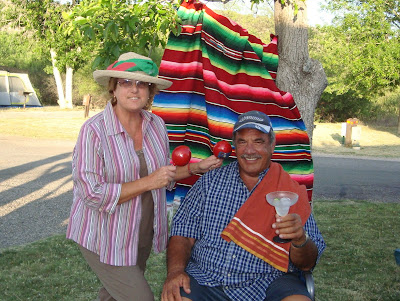 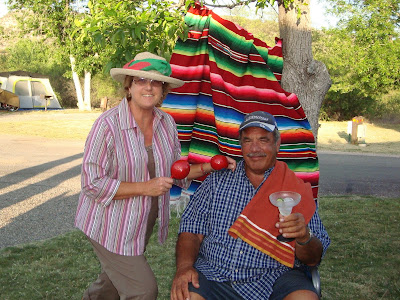 Faye and Ken. Ken was so festive that he brought out his special "Eat My Burrito" apron!! It was hysterical but I had to censor from the waist down!! 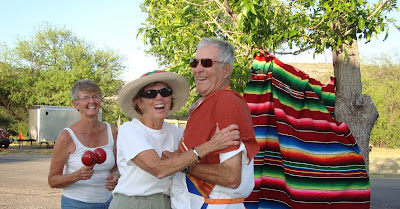 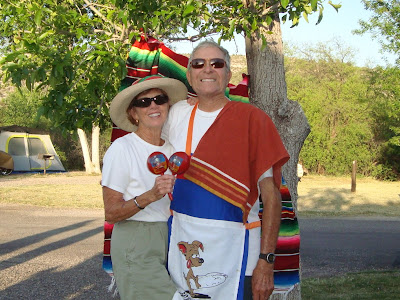 Oh, it was so much fun!!! Cinco de Mayo is one of my favorite Holidays!!! I hope everyone enjoyed themselves as much as I did!! Thank you, everyone, for coming to help us celebrate!!!