MORE FUN AT STAN AND SALLY'S

Sat, Mar. 21 - Stan and Sally invited us for Brats dinner at their place at Torrey Oaks this afternoon.  It was a beautiful day.

Stan grilled the Brats and the girls made potato salad.  Since we were having Brats, I brought a German Coleslaw instead of the usual.  Great dinner!

Joining us were Sally's brother and his friend who had driven over for the day. 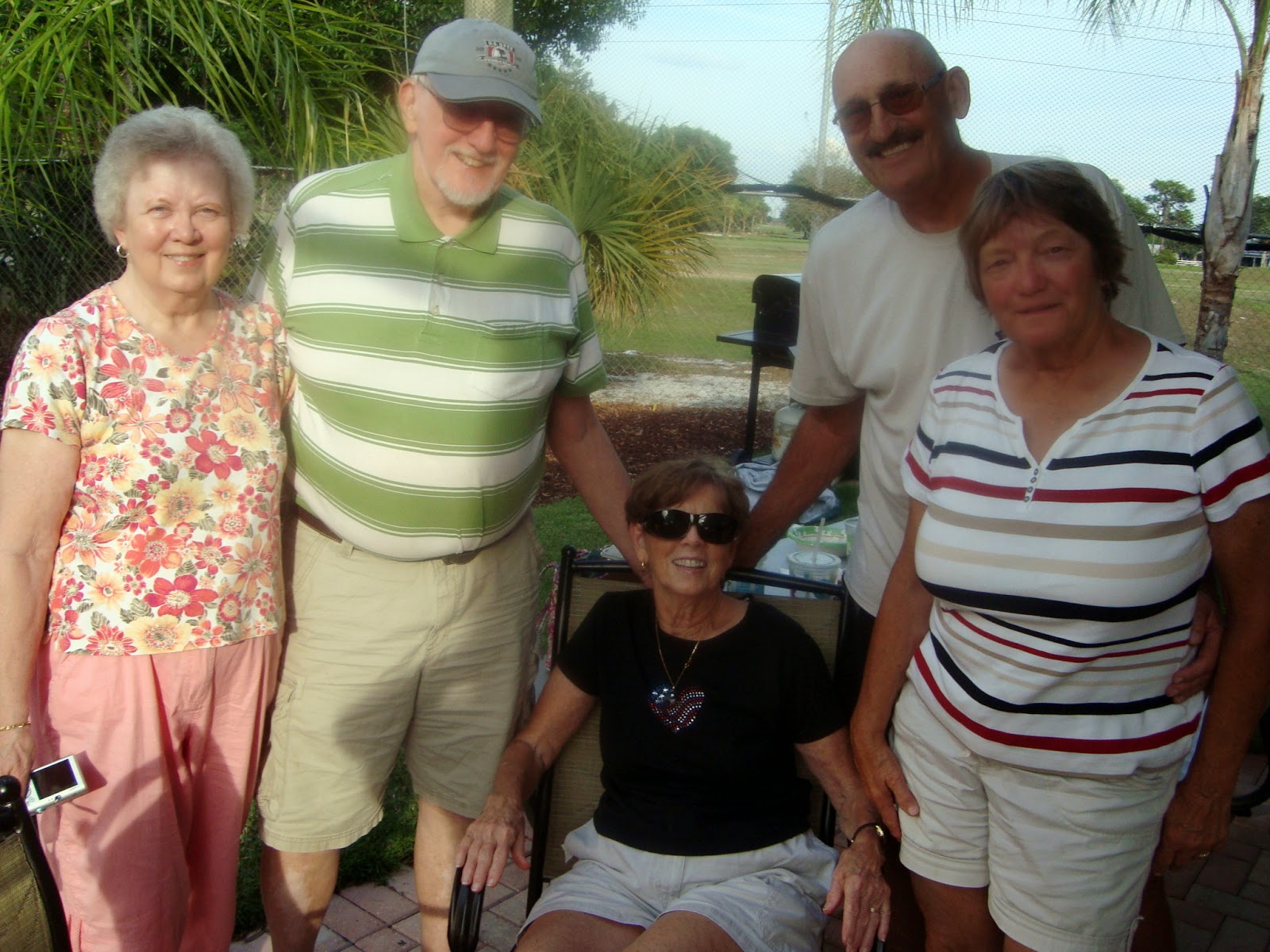 Sat., Mar 28 - Back at Stan and Sally's again!!!  Tonight we had grilled Pizza made with large size tortilla and Pizza sauce.  Each of us put together our own Pizza with Italian cheeses, peppers, mushrooms, pepperoni, etc. etc. etc.!!  It was fun and really, really good!!

Unfortunately, I forgot to take pictures of the Pizzas but I did get us enjoying Key Lime Pie for dessert!! Thanks guys for another fun evening!!
Posted by Highway Runner at 8:01 PM No comments:

PIZZA AT GIOVANNI'S WITH THE PICKLEBALL GROUP!

Fri, Mar 29 - While we were at the campfire the other night, there was mention of going to Giovanni's for Pizza one night.  Tonight's the night!  Marie was our organizer and let us all know that we were meeting at Giovanni's at 4:15 PM on Friday!!

Here is the group! 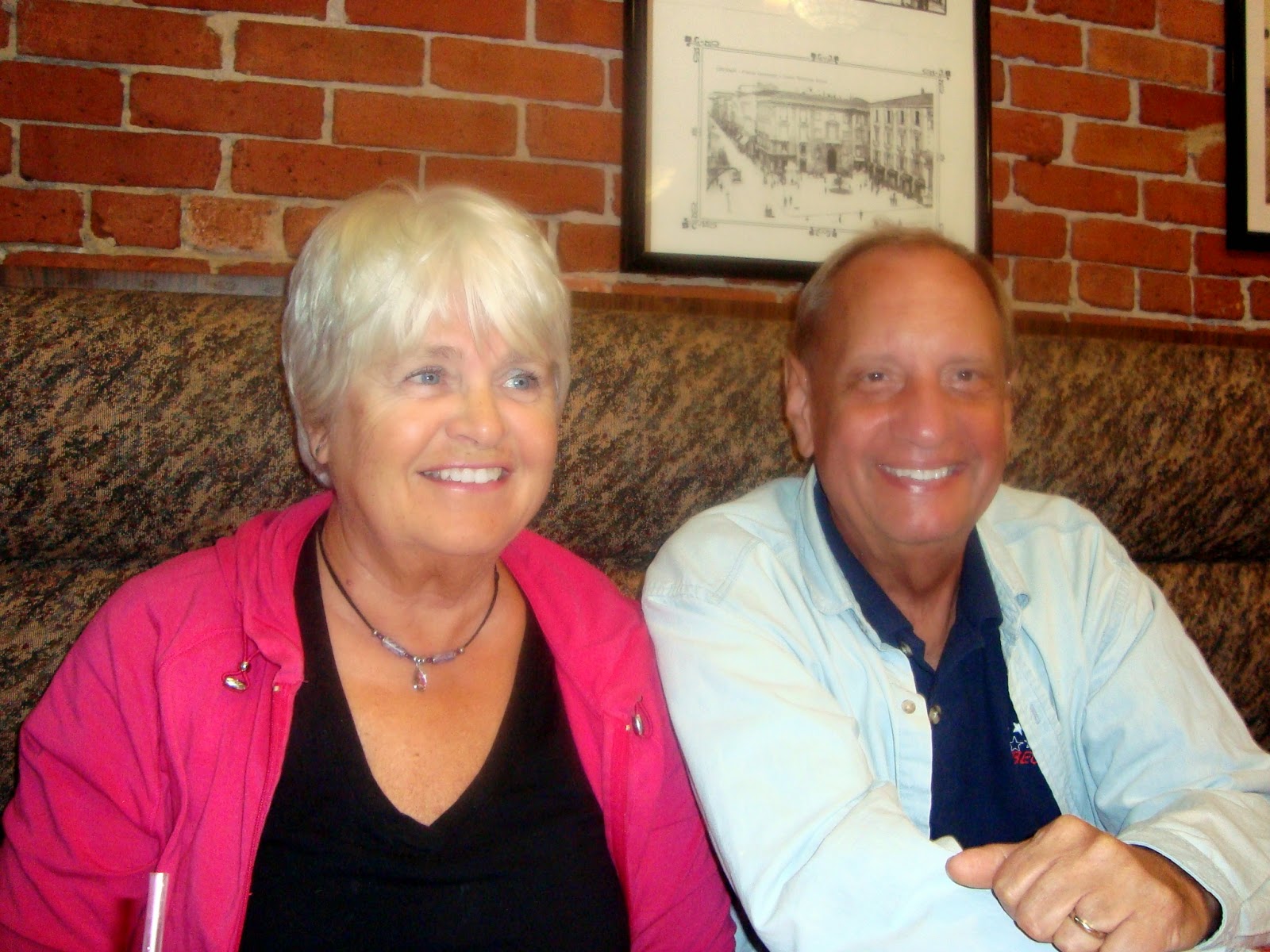 Tom and Becky who hosted the Campfire on Tuesday. 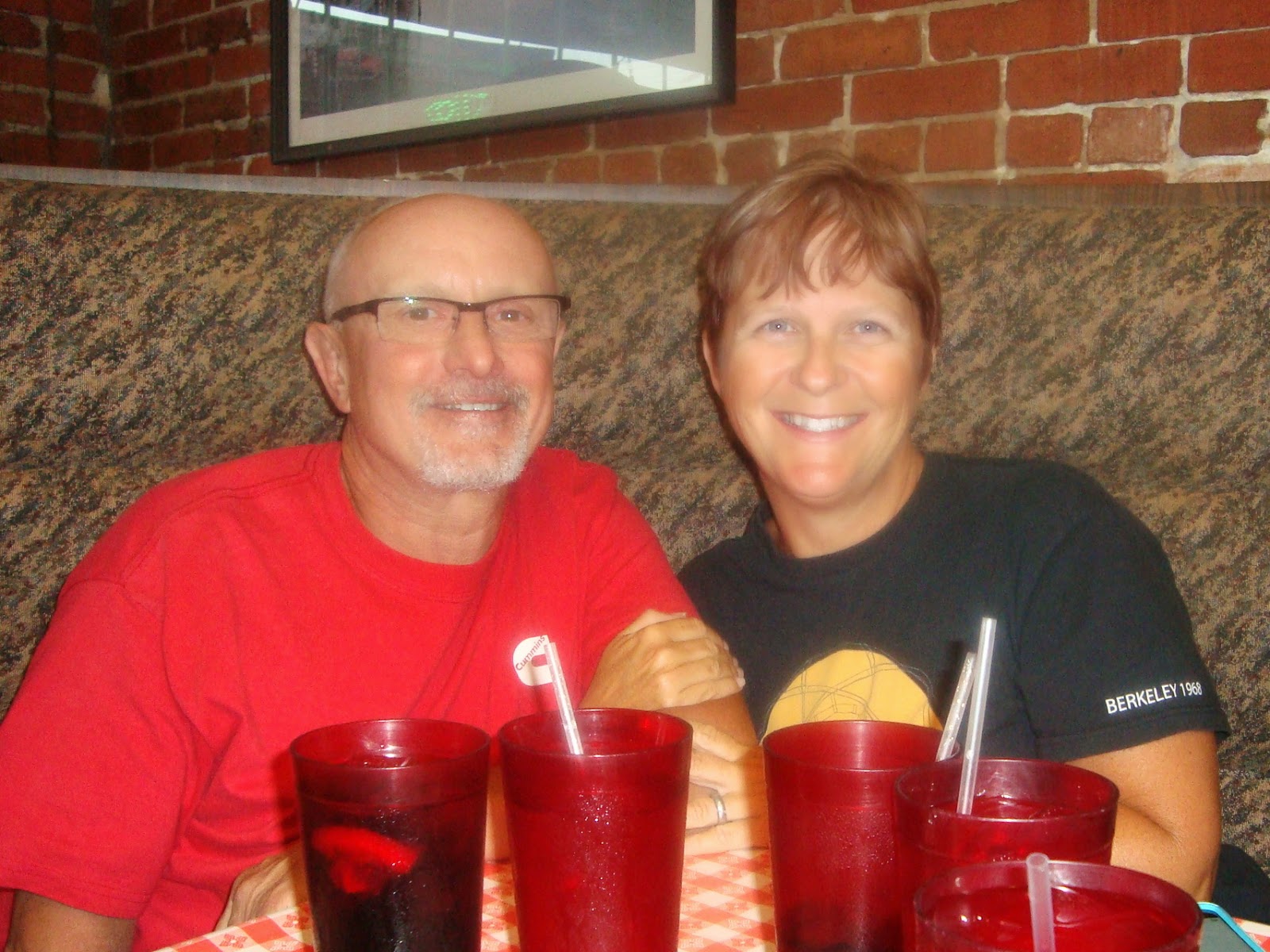 Faye and Ken.  Even though we don't get to the Pickleball courts very often, it is still fun to be included! 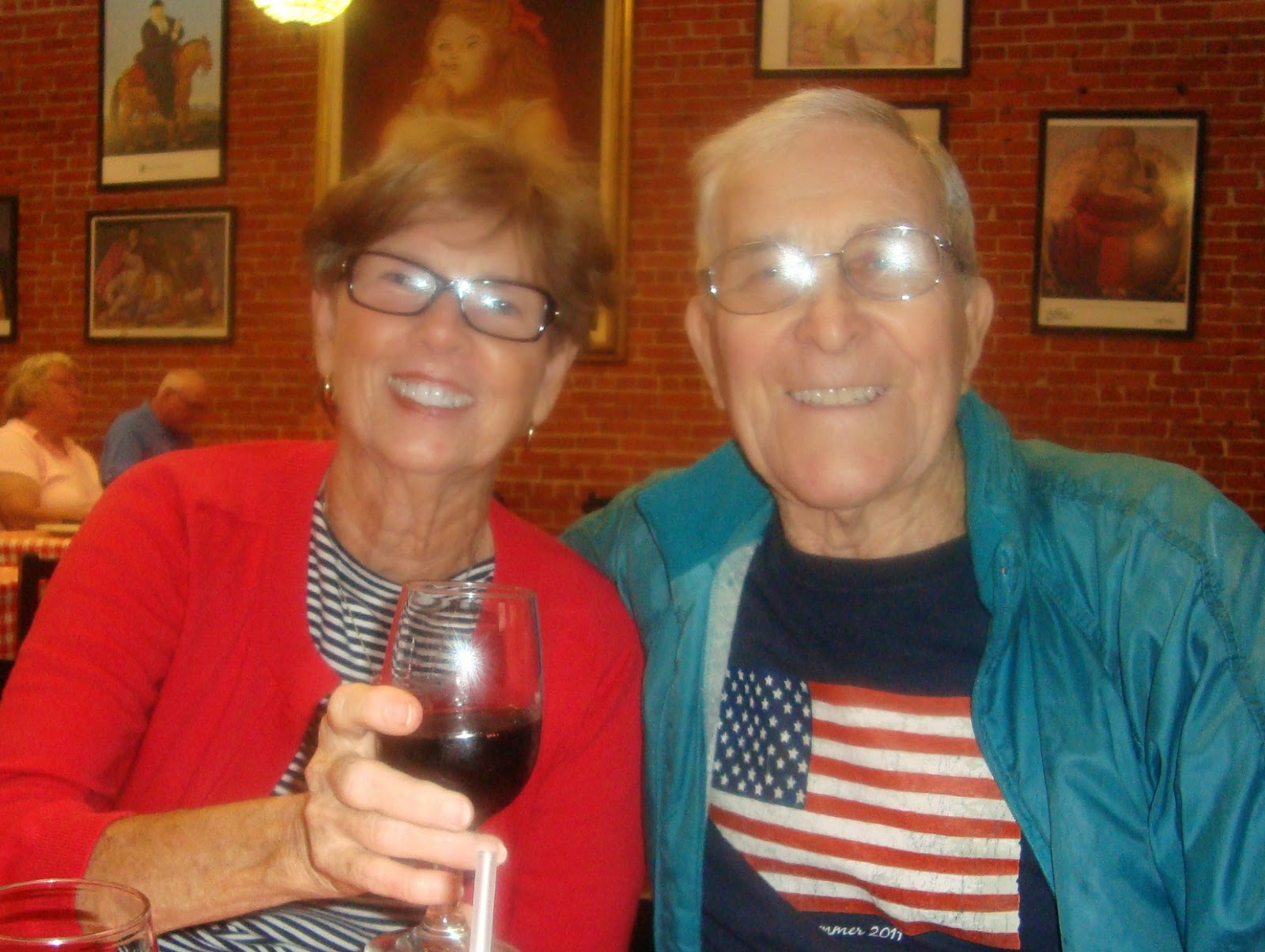 Sis and Paul seated next to us. At the far end of the table are Barry, Pam and Jerry. 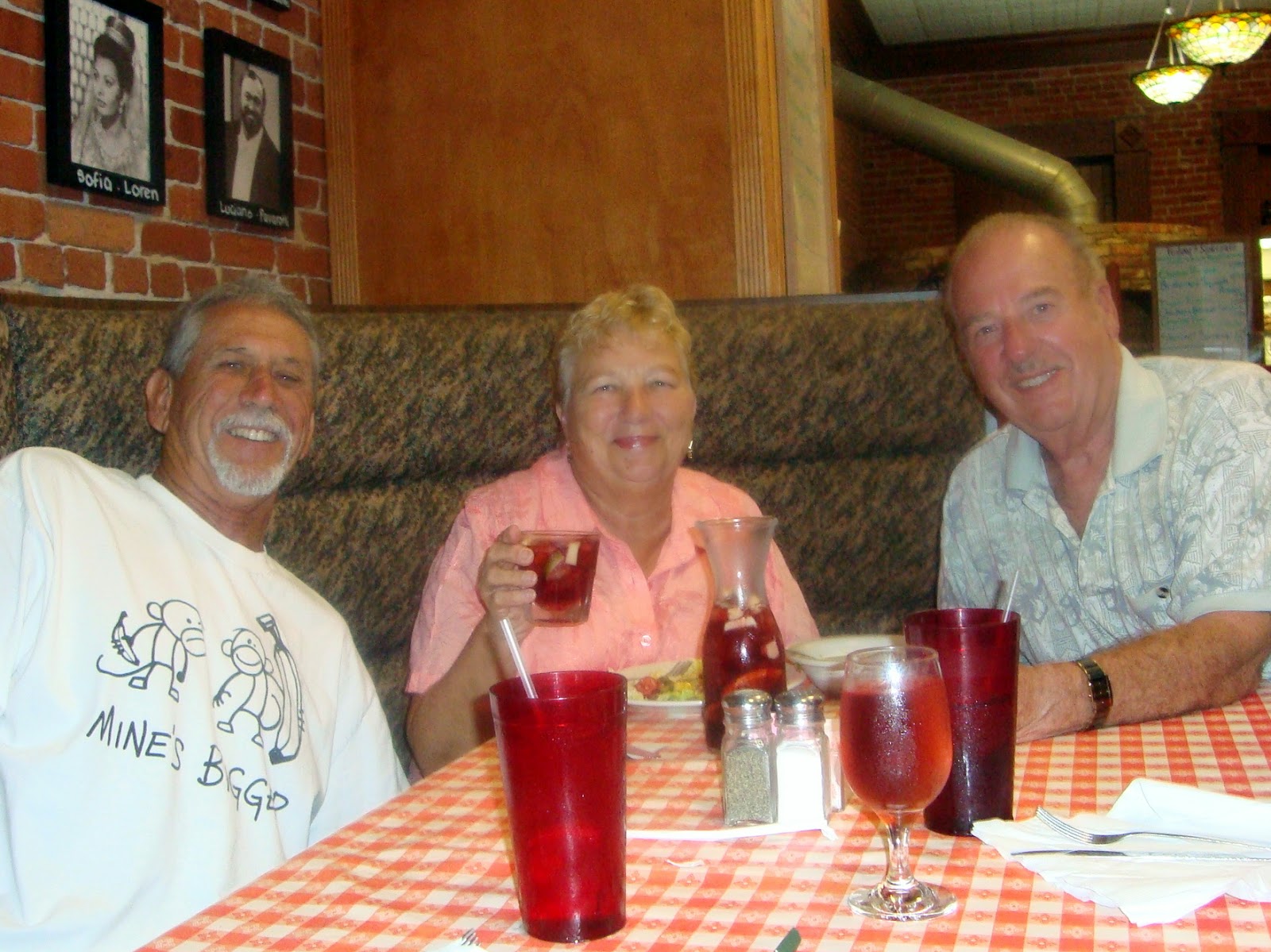 Here is my Pizza.  That is not Pepperoni slices, it's tomato and basil.  UMMM Good! 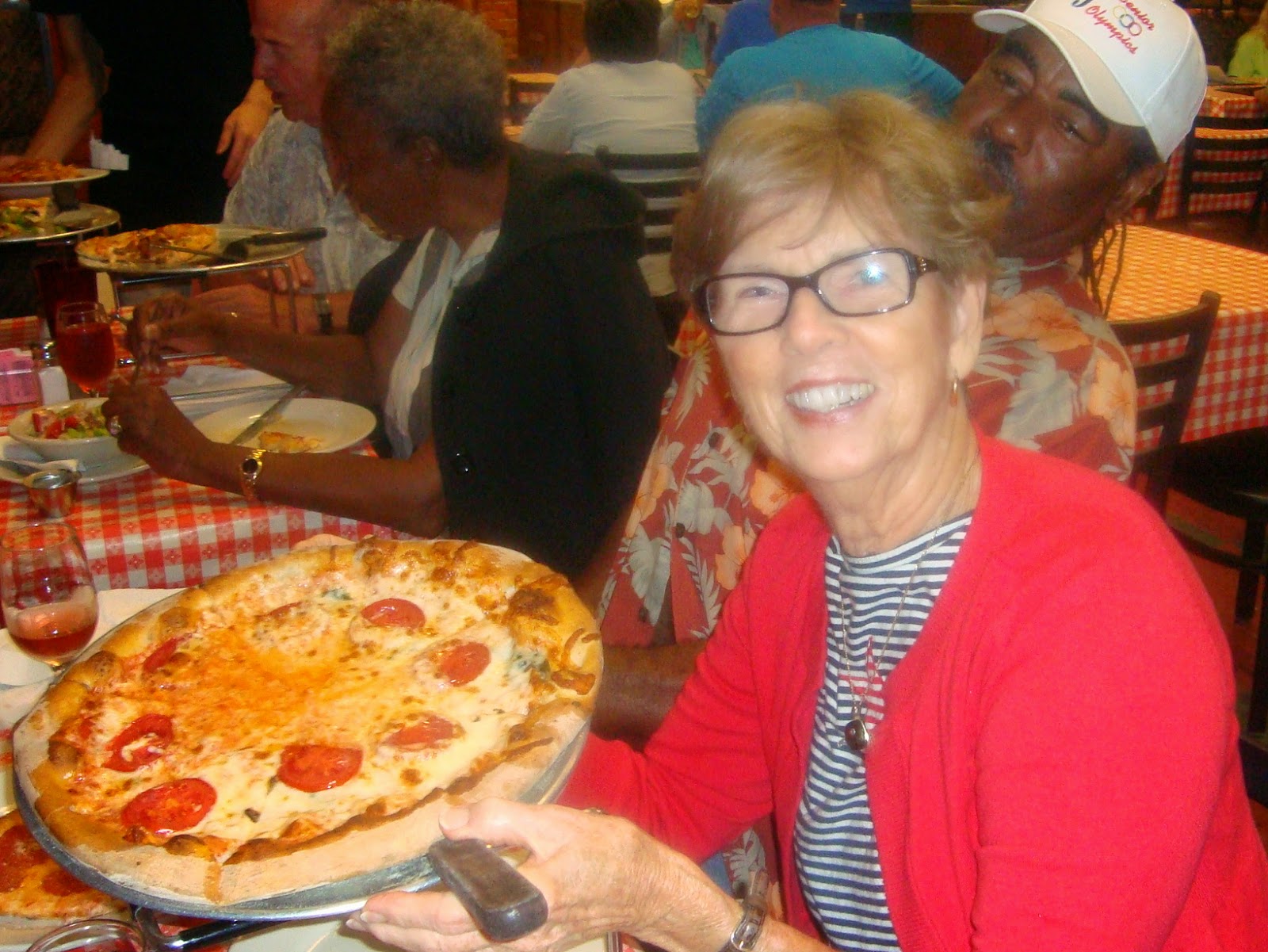 Barry did not order Pizza.  He got the Calzone.  It was huge!!  They must have gone to Italy to bake it because it took so long to him to be served!  HA HA 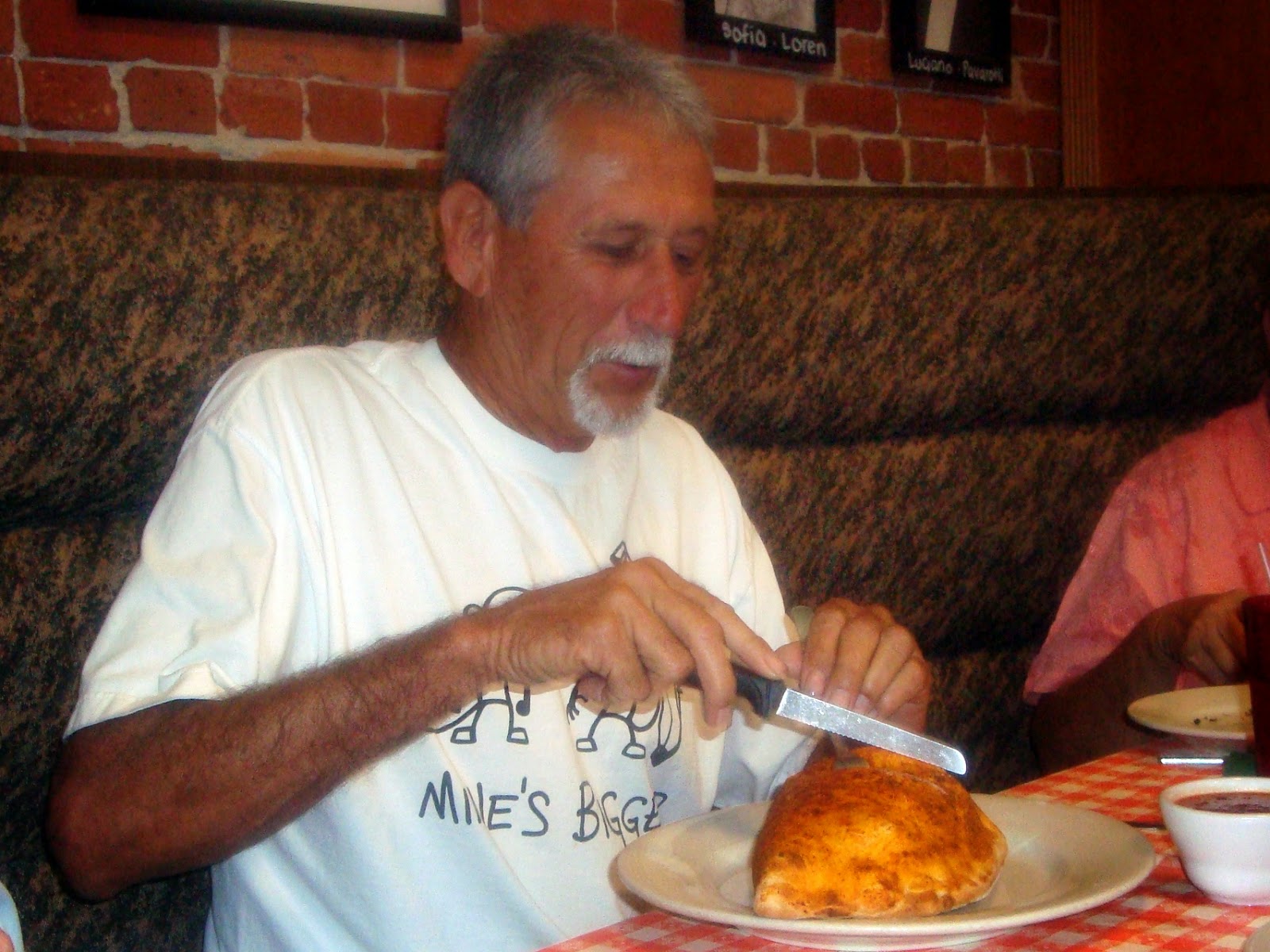 Thanks guys for another good-time!!
Posted by Highway Runner at 8:00 PM No comments:

FAREWELL TO JOE AND CIS -- LEAVING FLORIDA FOR ANOTHER YEAR!

Wed, Mar 25 - Cis called yesterday to tell us that she and Joe were leaving Torrey Oaks on Wednesday to head for home in Pennsylvania.  We could not believe it was time for them to leave so soon.  Cis said Stan and Sally were meeting them at Giovanni's on Wednesday for dinner and could we join them.  Of course, of course!!

Here is the group of us at Giovanni's:  Around the table:  Joe, Ken, Faye, Cis, Jackie, Sally, Scott and Stan. 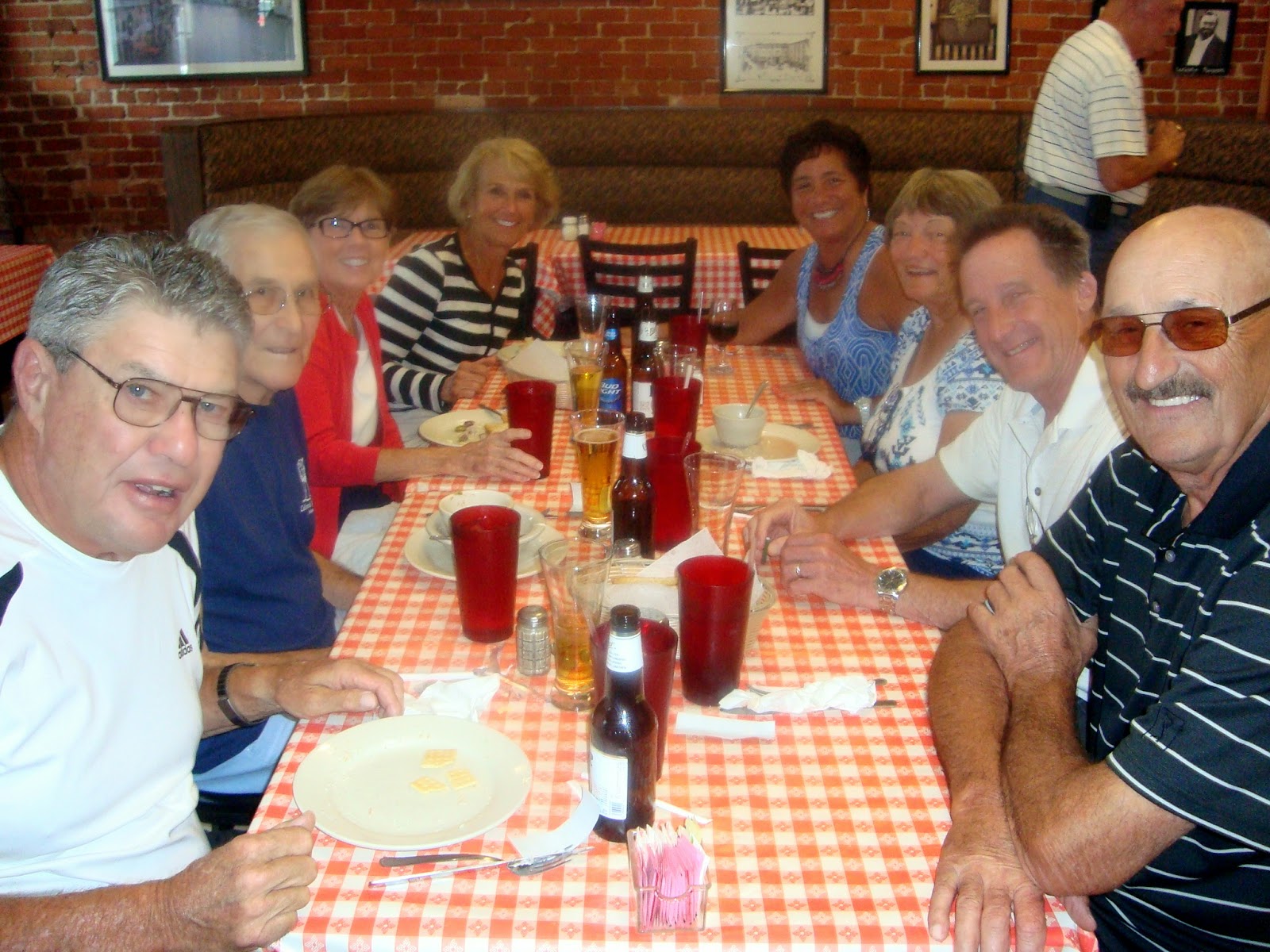 Really have enjoyed seeing Joe and Cis again this winter, but certainly hate to see them leave!!

Sidebar:  Joe and Cis are the ones who gave us all of that wonderful venison!!!  Thanks again, guys!!!
Posted by Highway Runner at 8:00 PM No comments:

AROUND THE CAMPFIRE WITH TOM AND BECKY

Tue, Mar 24 - There is a good group of Pickleball players here at TT Peace River; however, Ken and I have not made an appearance at the courts -- getting O L D !!

We were thrilled when our friend Tom knocked on our door this morning and said he and Becky were going to have a campfire in the evening about 7 PM.  Some of the Pickleball players were going to be there and could we join them.

We were delighted of course.  Here are some of the guys:  Ken, Keith (notice his hair is back), Barry, and Jerry. 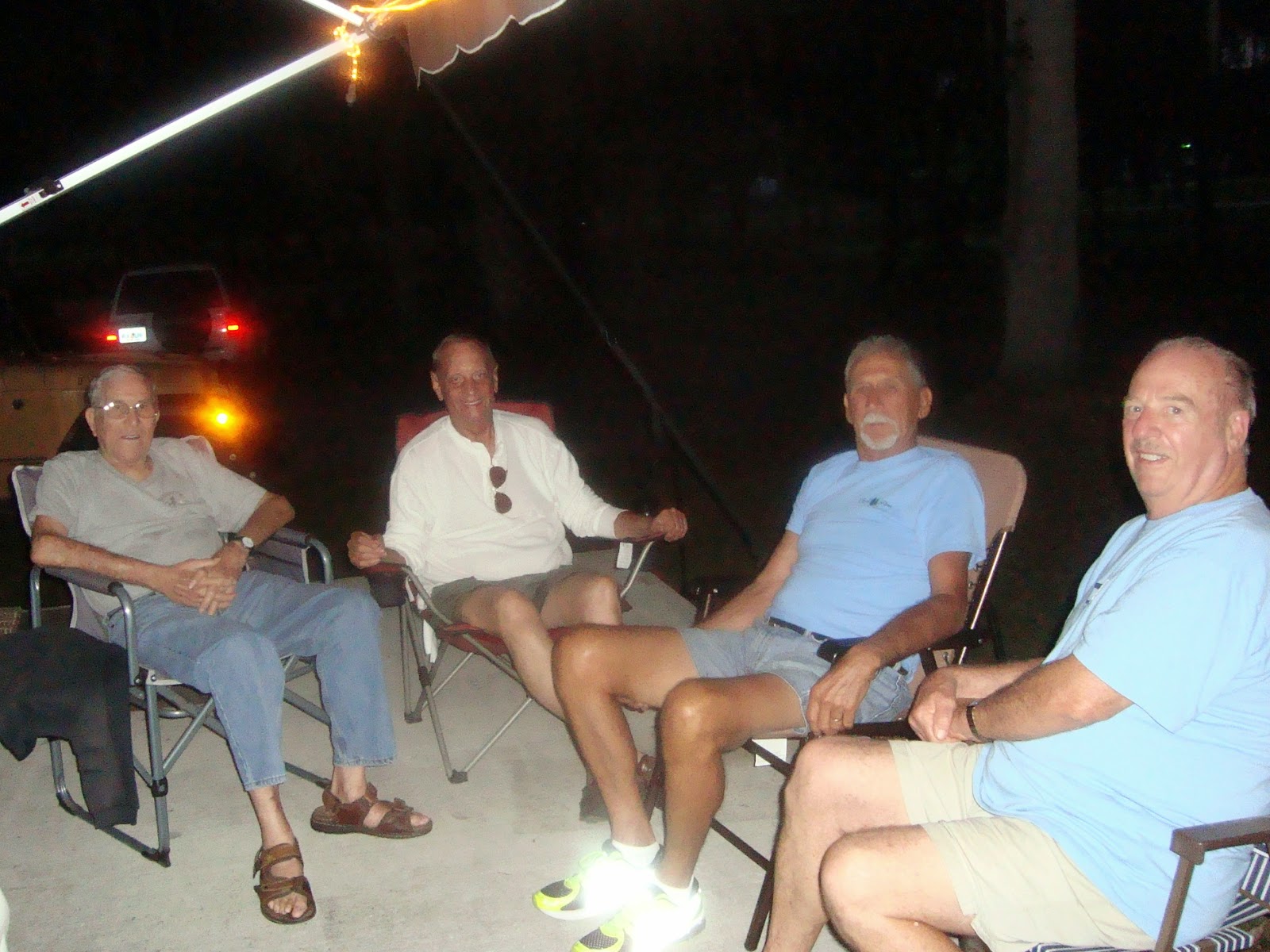 And some of the girls:  Marie, Faye, Sis and Pam. 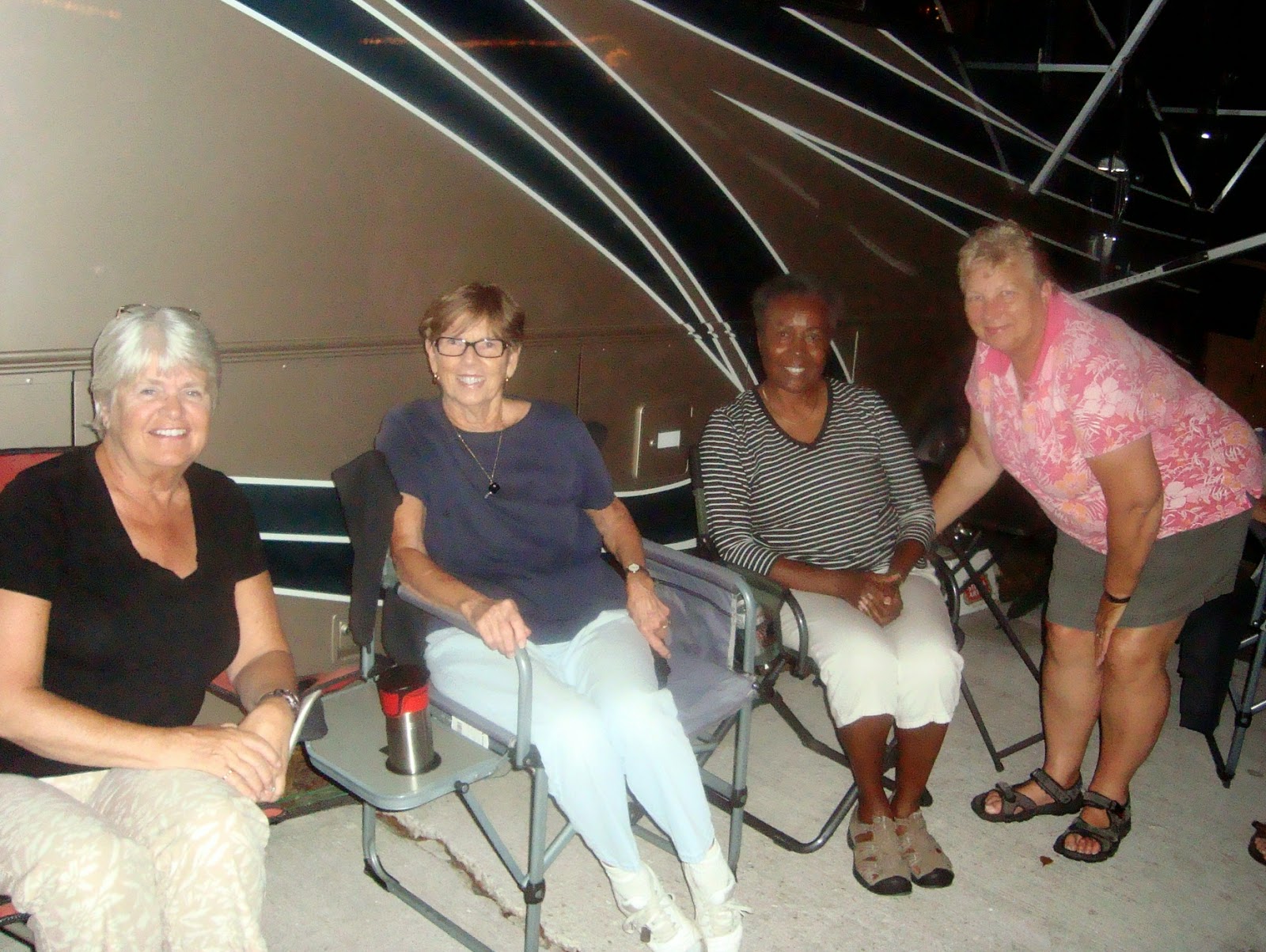 And our host and hostess Tom and Becky with Paul in the middle. 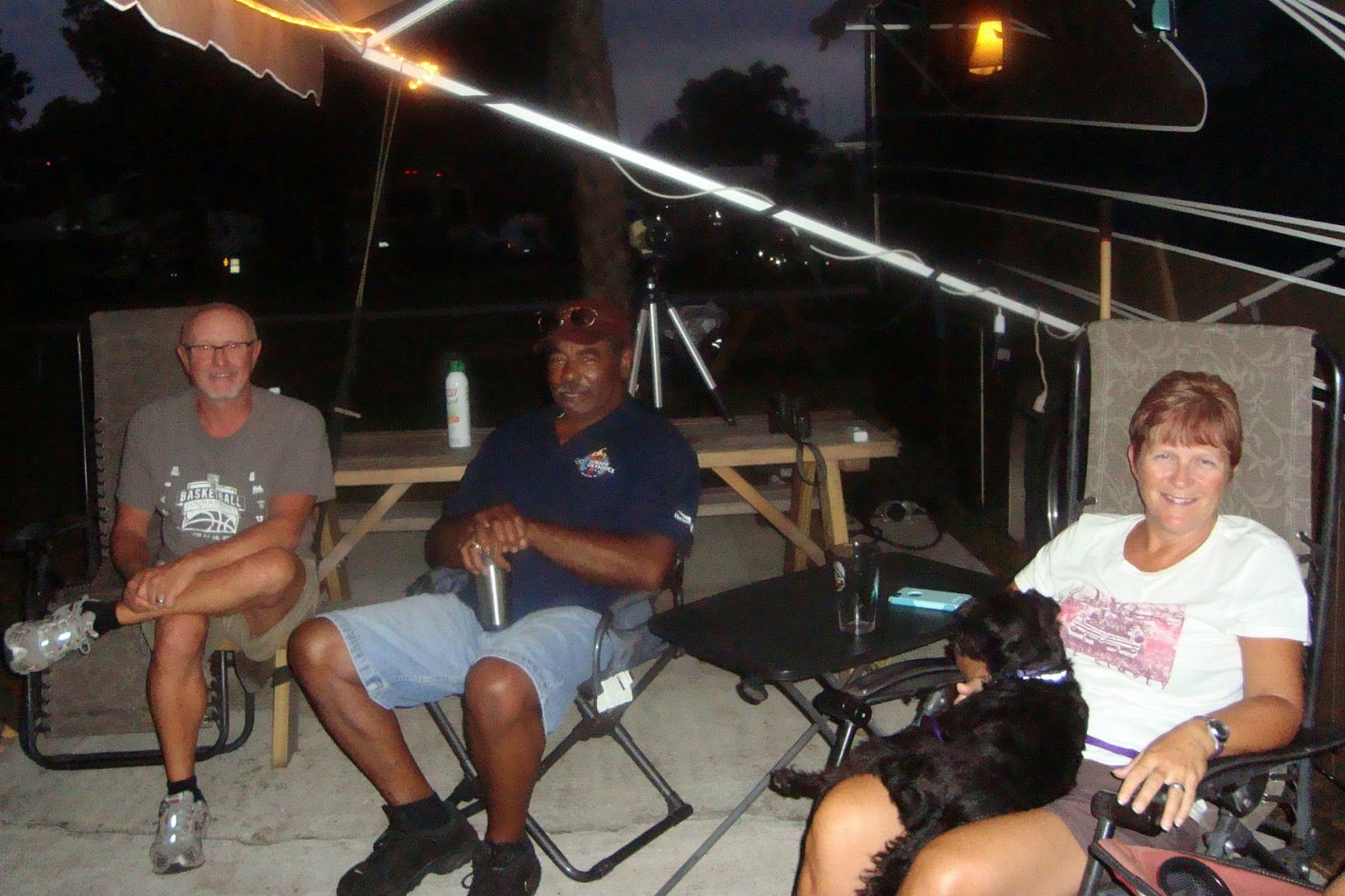 The evening weather was perfect.  The campfire was enjoyable.  And the company was most delightful!!  Thanks so much Tom and Becky for including!

Posted by Highway Runner at 7:59 PM No comments:

STORY OF THE STUFFED PEPPERS WITH TRAVIS

Fri, Mar 20 - Ken and I were taking a leisurely afternoon drive around the campground at TT Peace River a couple of days ago.  Travis was enjoying his patio beside the River so we stopped and joined him for awhile for some "Happy Hour" conversation.

Later, as we were getting ready to leave, Travis gave us two huge green peppers a friend had given him fresh out of their garden.  They were the most beautiful green peppers I have ever seen!  I told Travis if he would give us three peppers I would make us all a Stuffed Pepper Dinner.  So we took the three peppers and decided on dinner on Friday (today) at 5:30 at Travis' by the River!

The peppers were so large that it took a full recipe meant for six peppers to have enough to fill the three of them.  Along with the Stuffed Peppers we provided a Spinach Salad and Brownies for dessert.  Travis said that was the first Spinach Salad he had ever eaten!  Travis used his mini fryer and made a bunch of French Fries.   UUMMMMM!!

After dinner Travis built a campfire for us.  He had a pile of wood he wanted to use up before pulling up stakes in a couple of days. 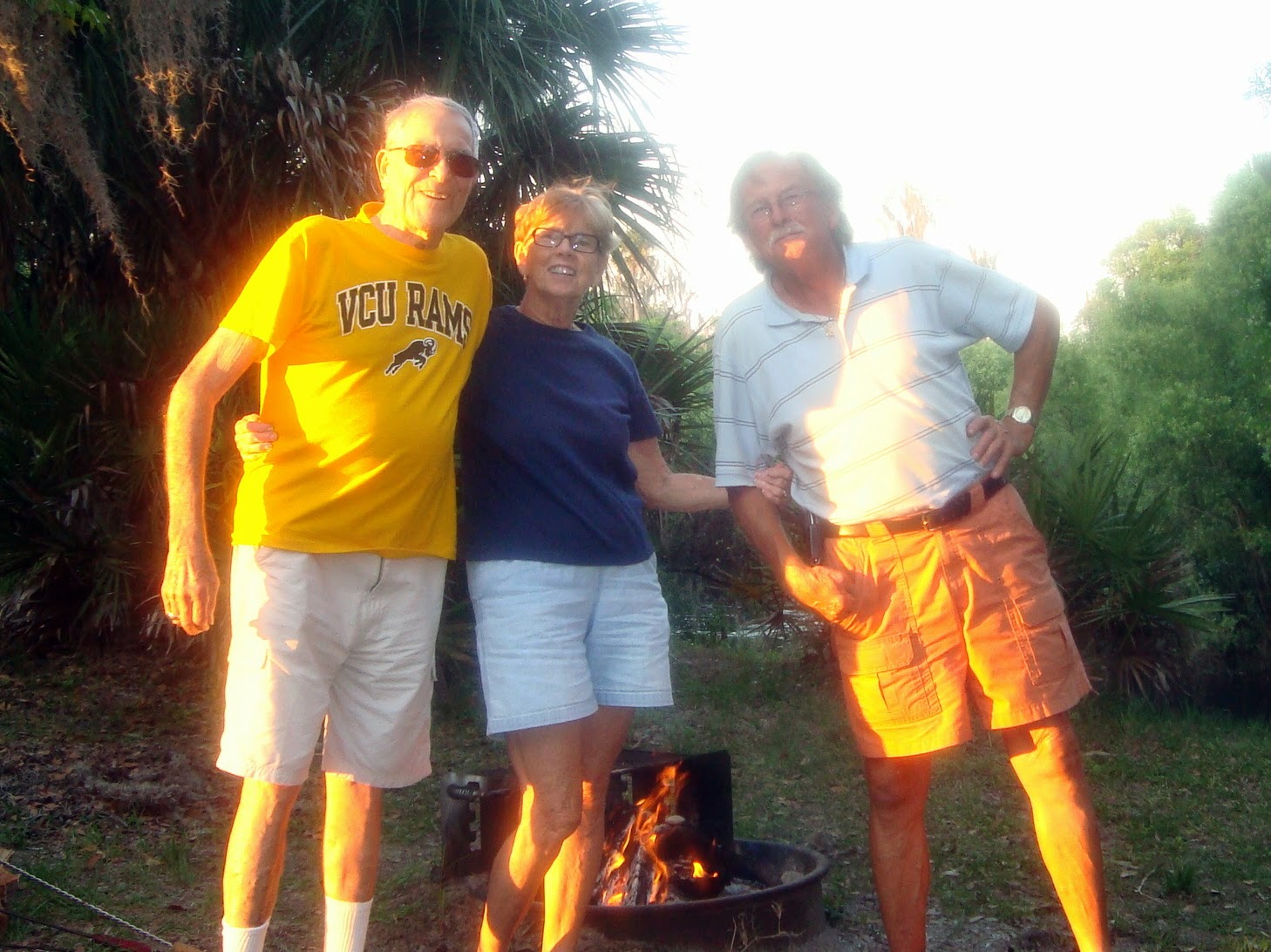 Thanks so much Travis.  That was a lot of fun!!
Posted by Highway Runner at 7:58 PM No comments:

ANOTHER DELICIOUS DINNER WITH TRACY

Fri, Mar 13 - We spent the afternoon with Ken's daughter Tracy in Sanford.  Well, actually, we spent part of the afternoon AT Tracy's watching the VCU basketball game against University of Richmond in the Quarterfinals of the Atlantic-10 Conference.  This was a very important game because Richmond had beaten us two times already this season.  We absolutely Could Not lose again!!!  We Won!!!  In fact, VCU went on the win the Atlantic-10 Conference 2015!!  Go VCU!!

After the game, we spent time with Tracy and Chuck and Gabe playing around with their Royalty Puppies.  https://www.facebook.com/RoyaltyPuppies. 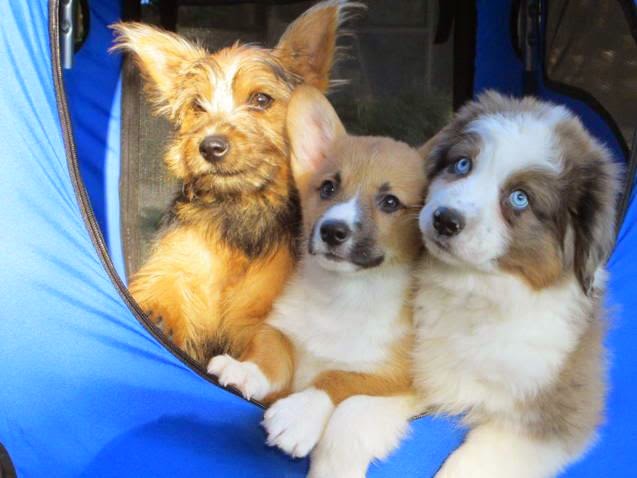 During the afternoon, Tracy mentioned that a friend of theirs was taking riding lessons at the stables and would be riding this afternoon and might come for dinner.  We went out to watch him ride but we were too late.  He was just heading to the stables to end his ride.

Later he did come over to the house and Tracy introduced us:  Steve ? who was involved in producing a number of episodes of "American Pickers" on TV.  He was very nice guy and it was an enjoyable experience getting to meet him.

We all went outside to take a look at his Fiat 500.  The guys were impressed:  Chuck, Ken, Gabe, and Steve 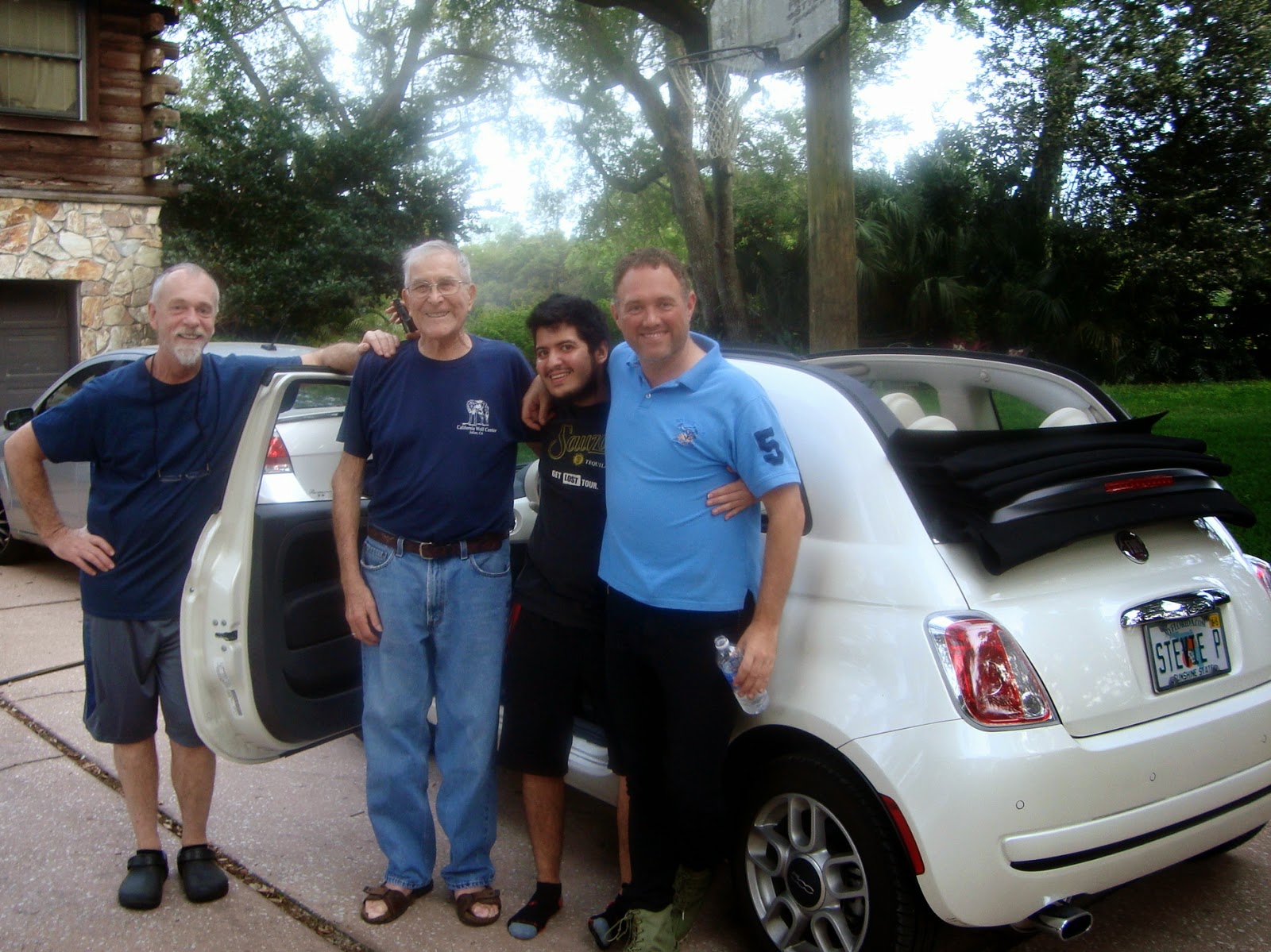 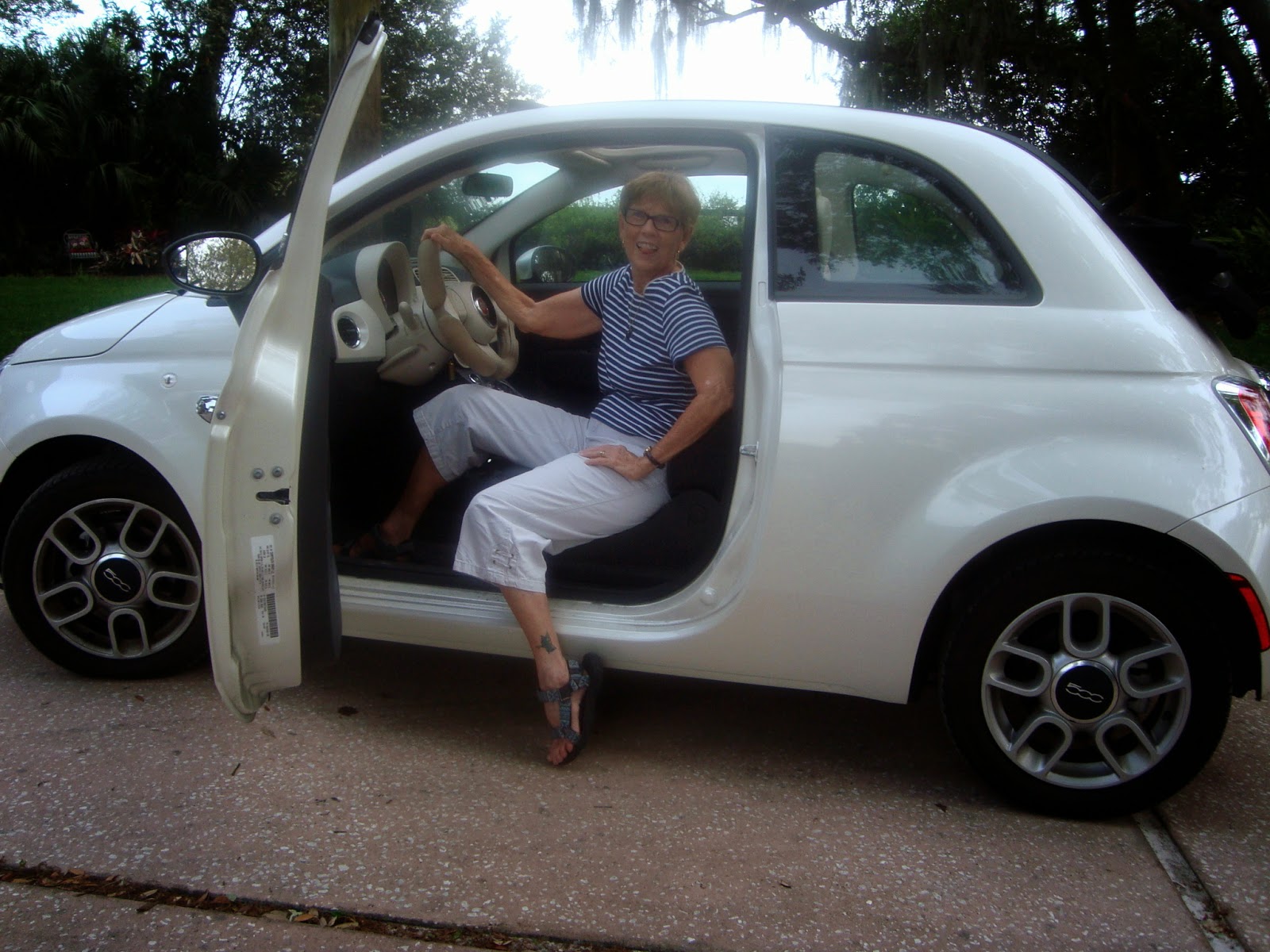 Ken checking it out a little closer. 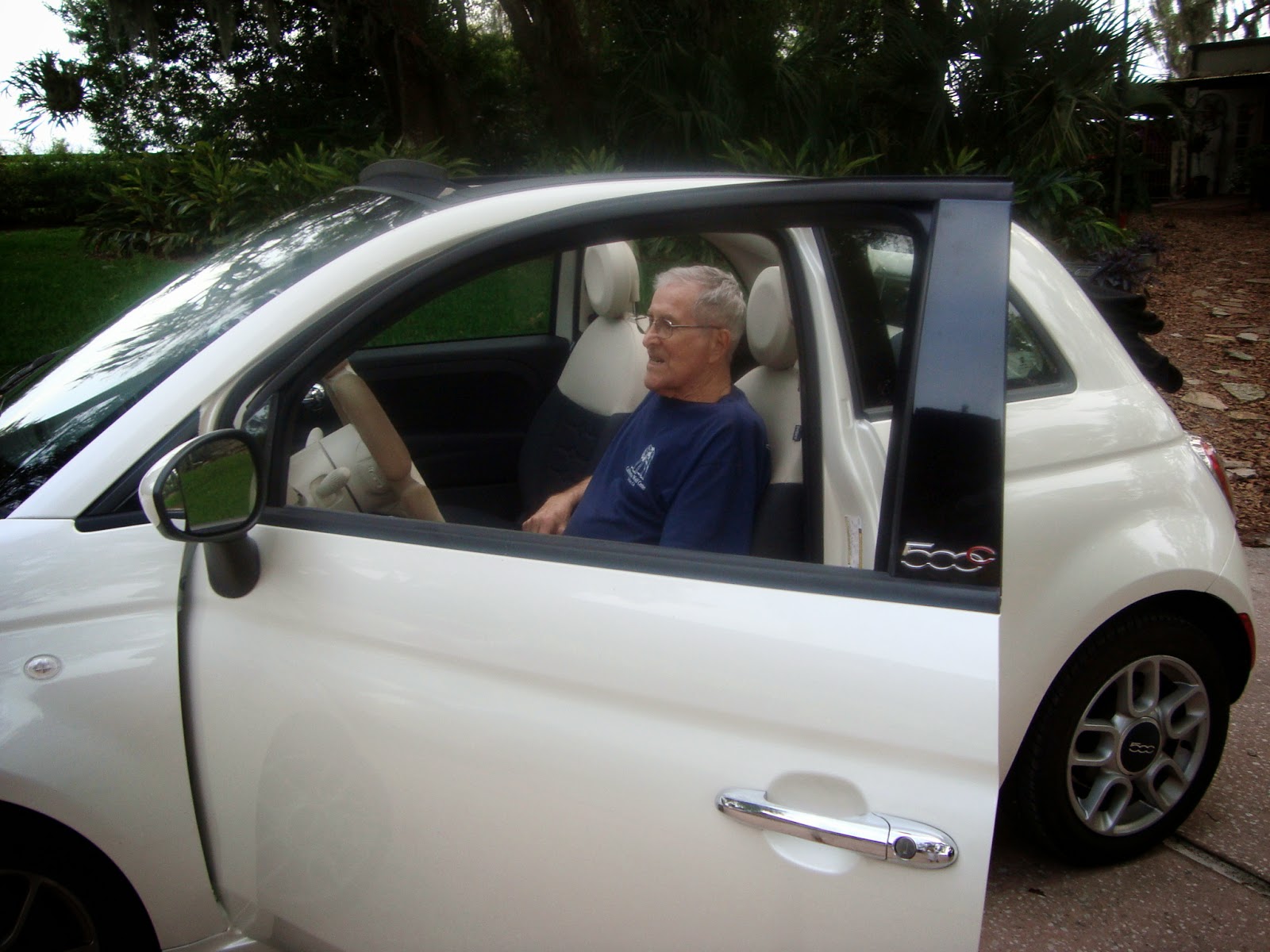 For dinner Tracy prepared a large kettle of mussels - 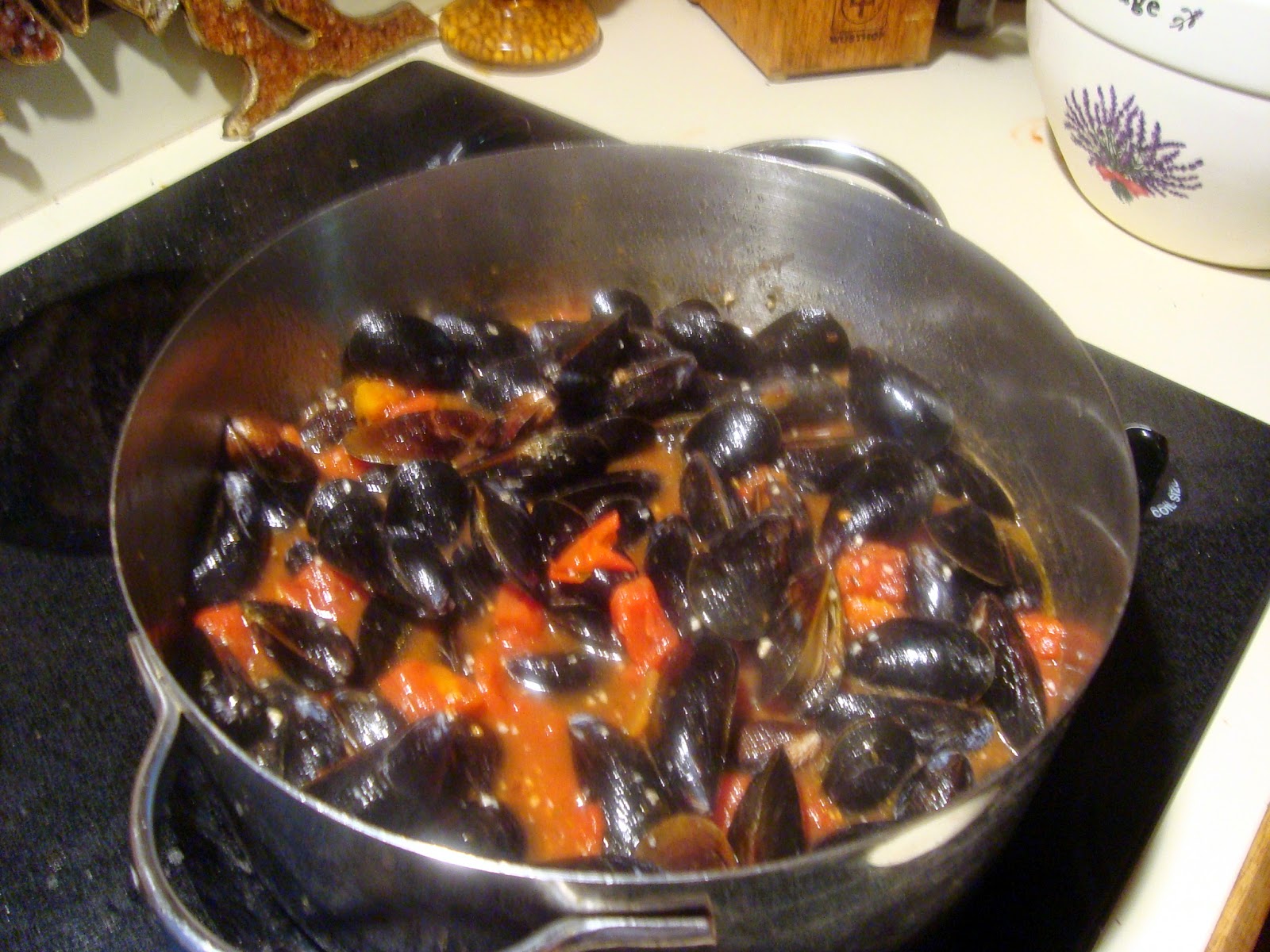 And baked Grouper with slivered almonds. 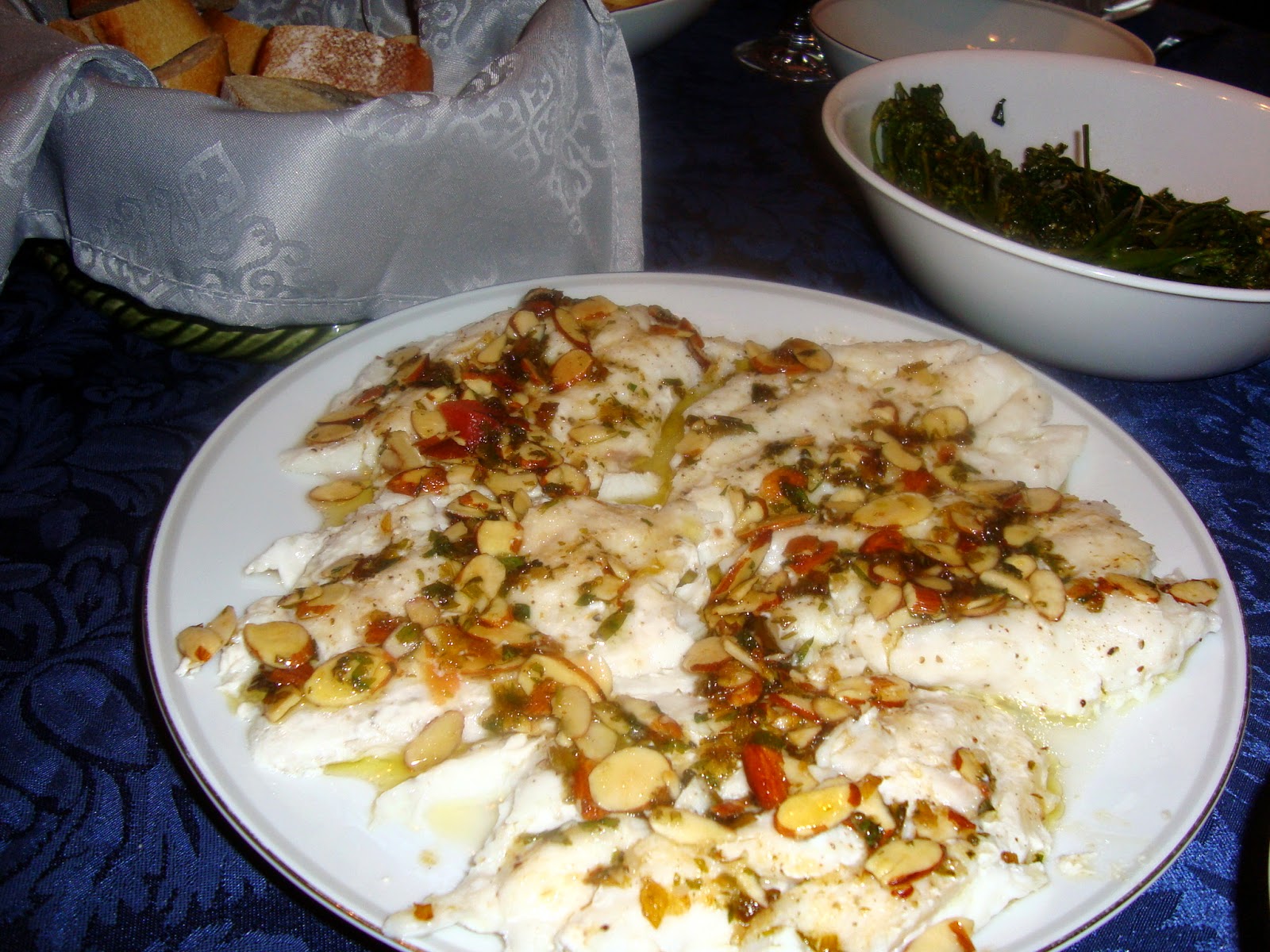 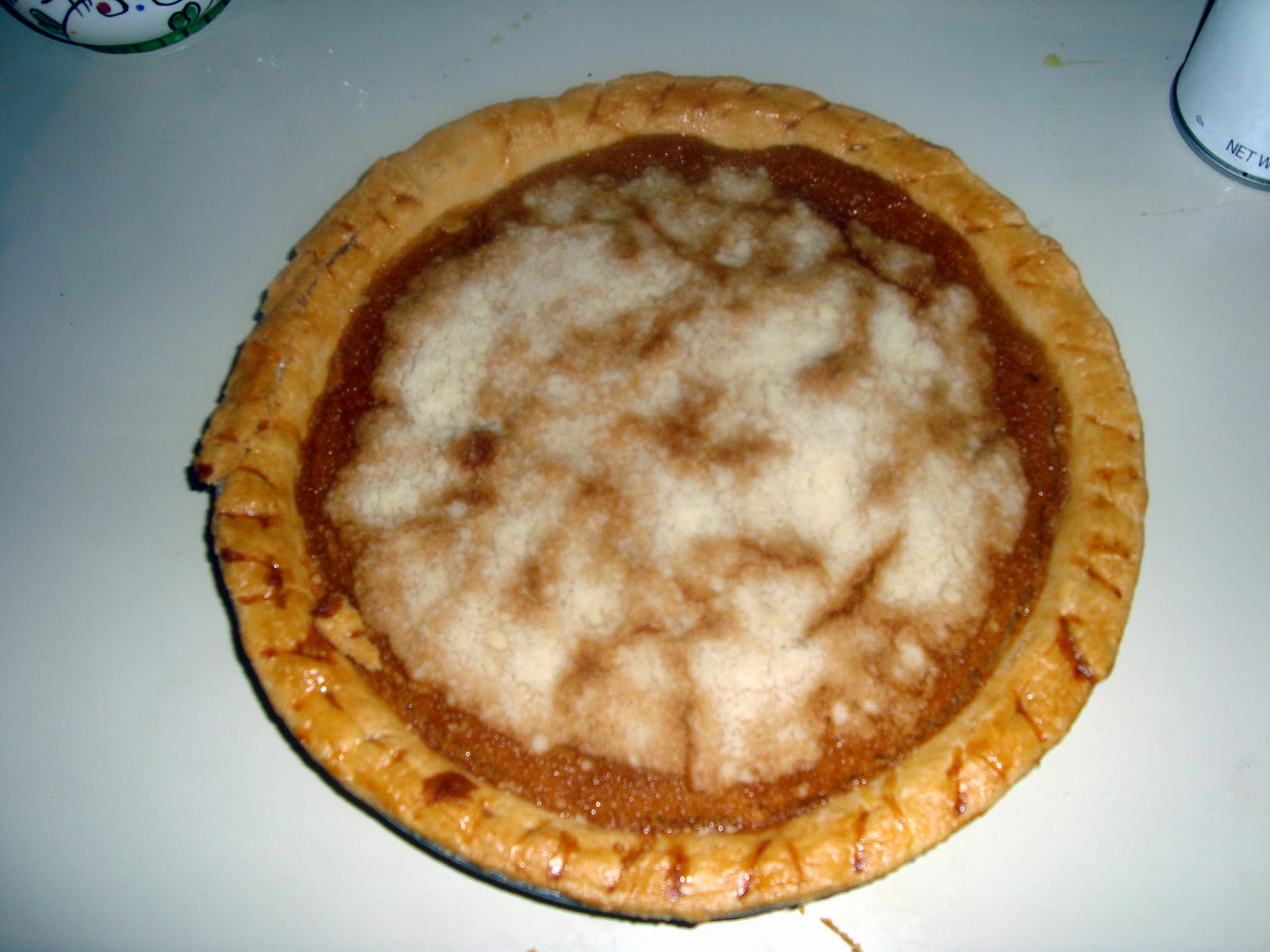 It was a very enjoyable time on the farm and a delicious dinner.  Thanks to all of you.

Posted by Highway Runner at 7:58 PM No comments: