Mike and Diane took us out to dinner tonight for in celebration of Father’s Day!!! The restaurant was Mimi’s Café, a new restaurant that just opened in Short Pump a few weeks ago. Already it is one of their favorites (and with good reason)!!

A funny thing (I thought). The waitress, a really cute young lady, kept coming to our table asking if she could take our dirty dishes. She would pick them up as soon as someone was finished with a dish. Several times I had to grab my bread and butter plate or my salad bowl to keep her from taking it. The four of us kept laughing about it. When she came around again, I had one more bite on my dinner plate, but Ken gave it to her anyway. She said, "You've had it long enough. It's somebody else's turn now!!" We all thought that was a pretty good come-back!!

Thanks, you guys, for a great time and delicious dinner!! Love you!!

GETTING RID OF KEN’S “DAY BED”

Guess What!!!
Ken’s knee has improved so much he is now able to get up off the low sofa without too much problem, so we don’t need the six inch form pads to raise the height of the bed anymore. Now we need to get them out of the motor home!!! 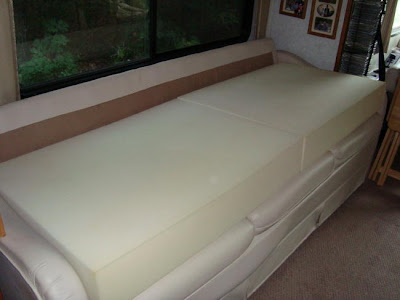 Or they could be used as a mattress for visiting grands; or as really, really neat floor pillows; or cut-to-shape for chair cushions!!! The possibilities are endless!!! WOW!!!
Great on the floor as floor pillows!!! 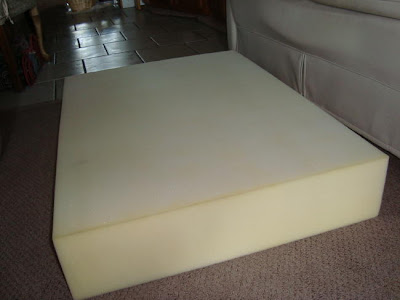 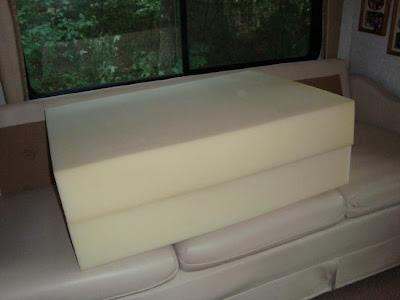 KAREN AND HARRY; MARY AND RALPH

Good Pickleball friends Karen and Harry and Mary and Ralph arrived at TT Chesapeake Bay on Tuesday afternoon for a couple of weeks’ stay.

We met Mary and Ralph in July 2004 –taught them how to play Pickleball, took them for a boat ride up the Piankatank River where we got caught in a deluge of rain, and introduced them to Euchre. They in turn talked us into playing water volleyball where I immediately jammed my arthritic thumb!! Ouch!! It was a lot of fun.

A few years later, Mary and Ralph met Karen and Harry on the Chesapeake Bay Pickleball court. They have been best of friends since that time. They usually meet here once a year, usually in July. Geez. Seems we've know Karen and Harry for a long time, too. We were all here last July 2008 when our friends Wayne and Nancy stopped by Chesapeake Bay on their RV trip East. 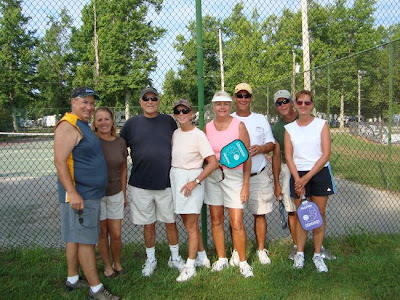 We could only say “Hello” and “Goodbye” because we were scheduled to leave the park on Wednesday morning for our “week out”. However, I was able to join the four of them for some of Mary’s delicious home made banana pudding! Harry threatened to buy up all of Wal-Mart’s old bananas so Mary could make lots and lots of pudding!! UUMMMMMMMMMM 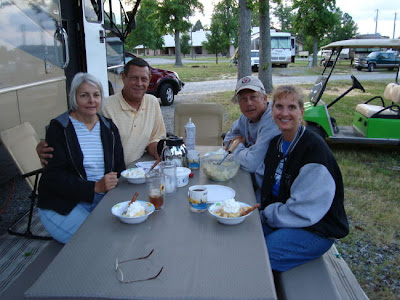 Fortunately, we’ll be back next week before they leave. We’ll get to play around with them then!
Posted by Highway Runner at 10:11 PM No comments: