BLOG CATCH-UP BACK AT TT CHESAPEAKE BAY AND RICHMOND

NOV. 02 - THE FOLLOWING ARTICLES TOOK PLACE THIS PAST SUMMER AFTER WE RETURNED TO THE RICHMOND AREA FOLLOWING MY GRANDSON'S WEDDING IN RALEIGH.  THEY ARE POSTED IN THE ORDER THEY OCCURRED, BEGINNING WITH THE BLUEGRASS FESTIVAL AND ENDING WITH AN ANNIVERSARY BRUNCH.

Posted by Highway Runner at 11:31 PM No comments:

BLUEGRASS BY THE BAY

Thursday - Saturday, September 20 - 22 - Thousand Trails Chesapeake Bay hosted Bluegrass by the Bay which included the East Coast Bluegrass Band Competition on Thursday evening.  Although I am not a real fan of Bluegrass, I really enjoyed the event last year and looked forward to attending again.  The 2014 event was expanded from a two-day event to three days, and the price for TT members went up to $30/pp.

Here is a copy of the program for the weekend.  An unbelievable number of participants! 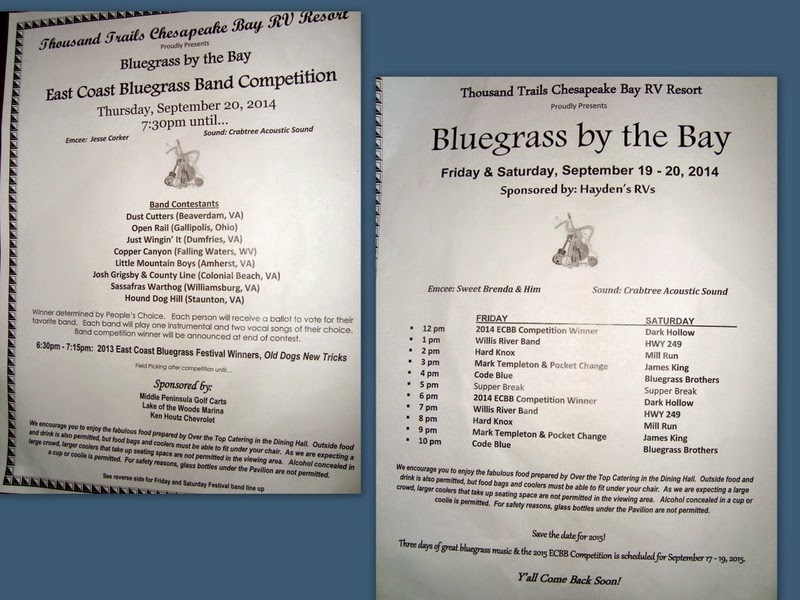 Bluegrass by the Bay started on Thursday evening with the East Coast Bluegrass Band Competition.  Each competing band performed two vocals and one instrumental.

Sidebar:  Attendees were given ballets with the competitors listed so we could check the ONE band we liked best.  Last year's winners "Old Dogs New Tricks" were not in the competition this year but entertained us before the program began.  I remembered them well because I voted for them! 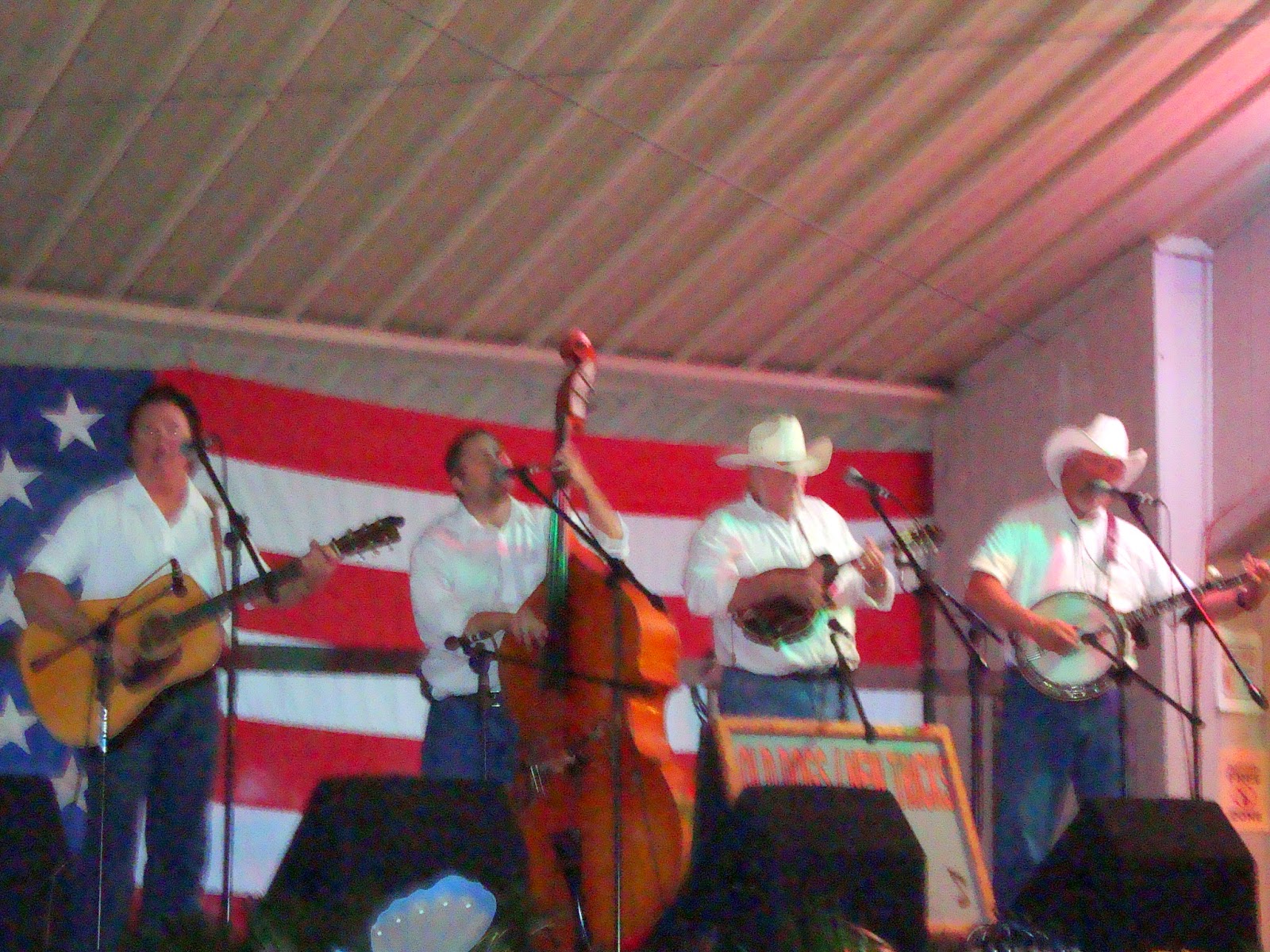 This year I voted for this group "Copper Canyon" because they had a really good sound and their leader looked like he was enjoying himself sooooo much.  Plus, they looked really professional.  All of that added up to my vote! 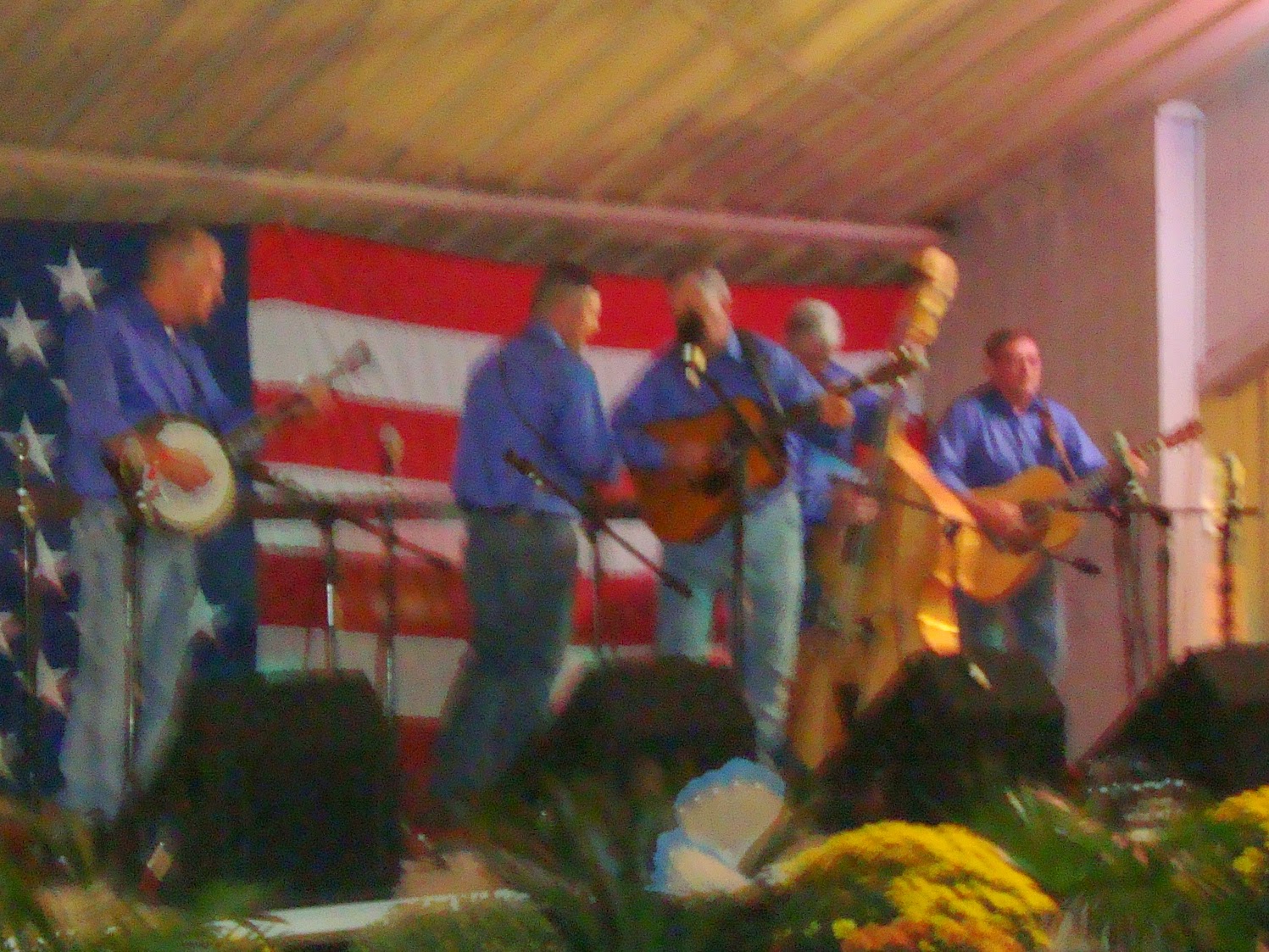 I liked this group from the moment they came on stage.  They were a handsome group of "senior citizens" known as the "Little Mountain Boys".  Had a really good sound but their last selection lost my vote. 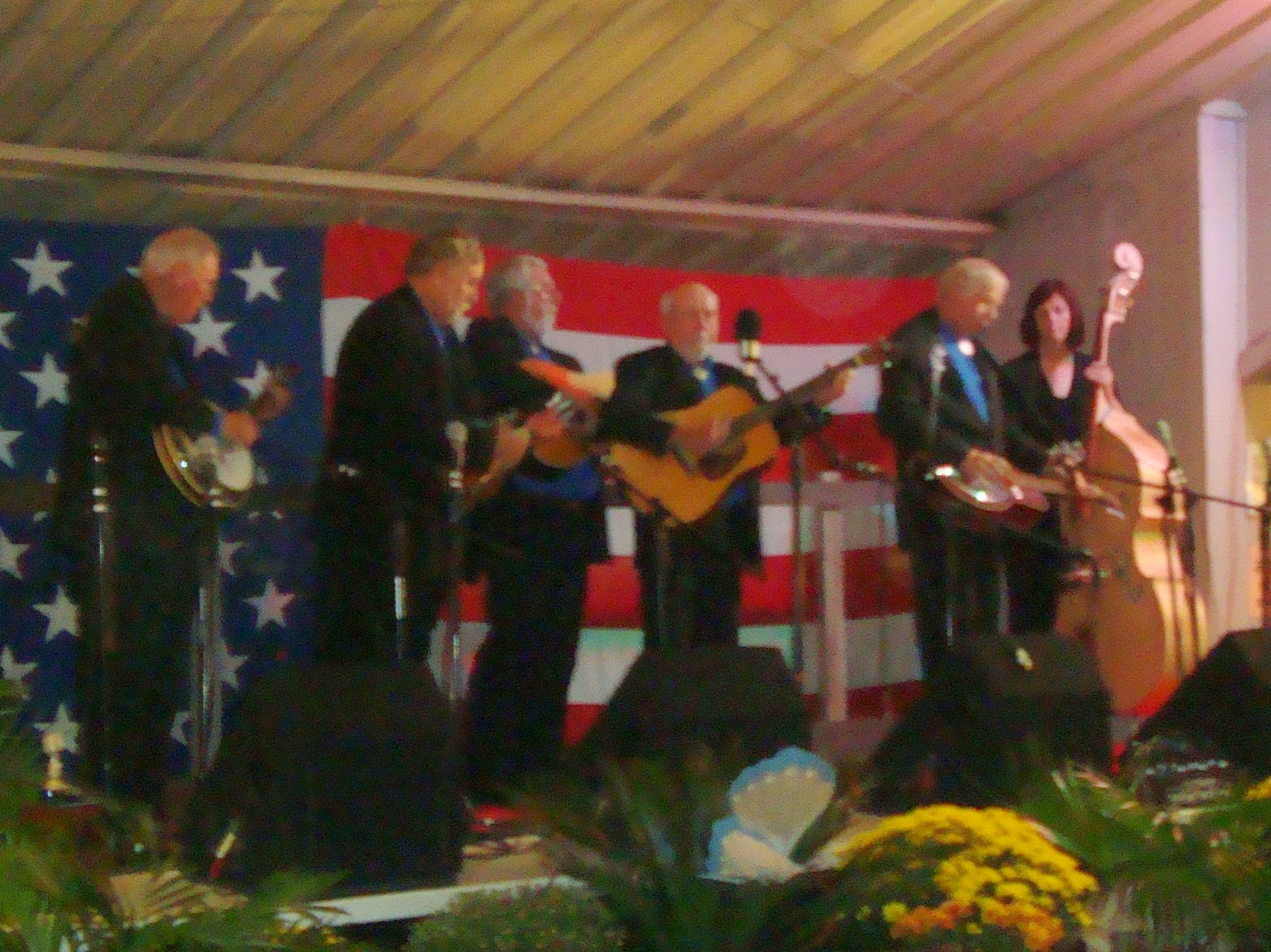 But this was the group that won, "Josh Grigsby & County Line"!!  I knew they would win because they had the loudest fans.  And, they had a really good sound too!  CONGRATULATIONS GUYS (AND GAL)!! 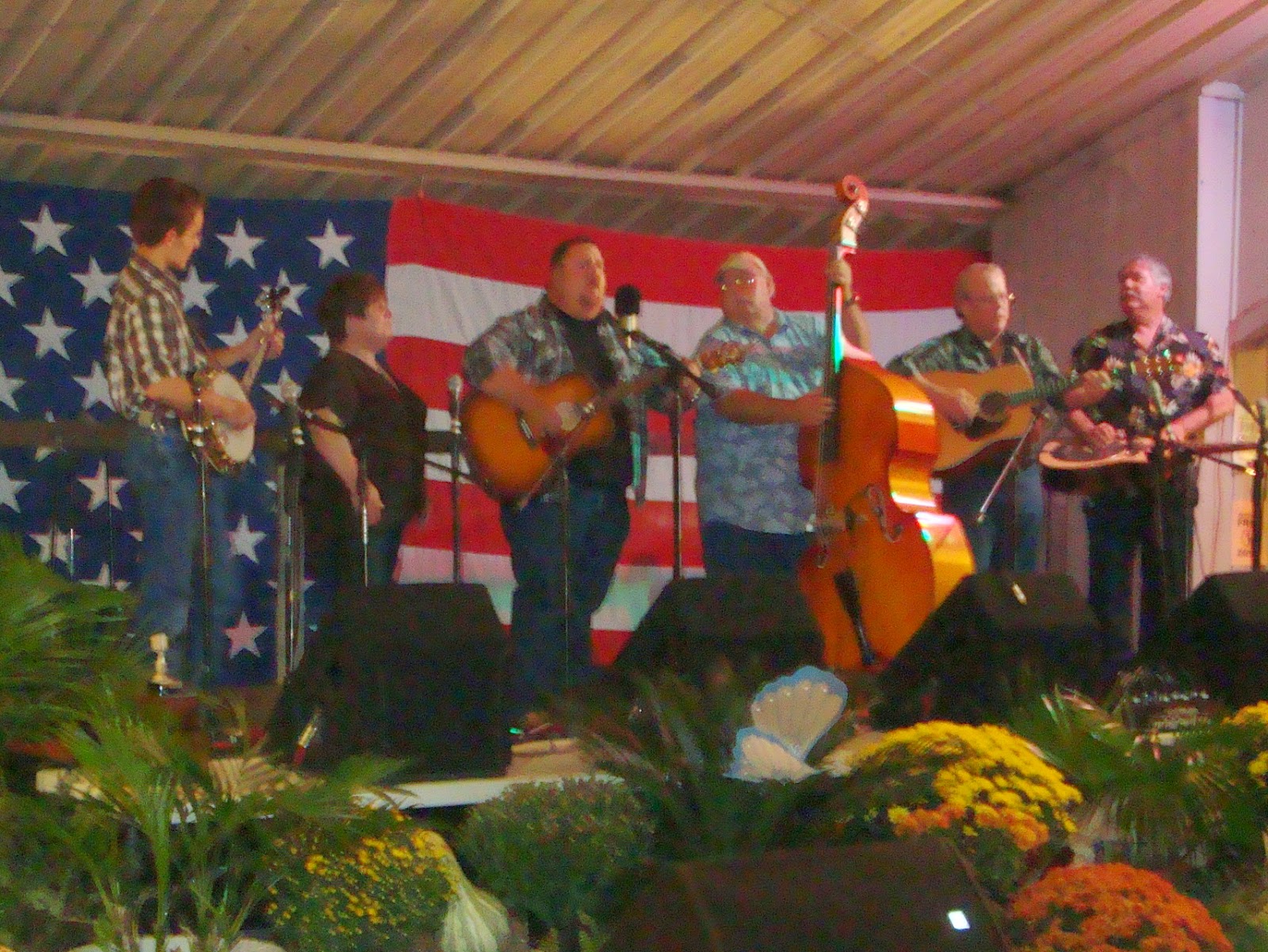 That was Thursday,  On Friday there was Bluegrass all day and all night, kicked off again by "Old Dogs New Tricks".  There were five bands on Friday from noon until dinner break.  Then the same bands played again from 6 PM until 11 PM.   On Saturday, they had the same schedule but with five different bands.  I didn't know there was so many Bluegrass Bands on the East Coast!!!

It was a really great festival!!  Good job, Sandy, and all involved!!

Posted by Highway Runner at 11:28 PM No comments:

Summer 2014 - You may have heard about the new Pickleball Courts that were put in at TT Palm Springs, CA.  You may have even played on them!!

Rick and Linda sent pictures of the four new courts that are located at the front of the resort, between the office and adult lodge and Hwy I-10.  I could not believe it!!

(I thought I had pictures of the completed courts but could not find them.) 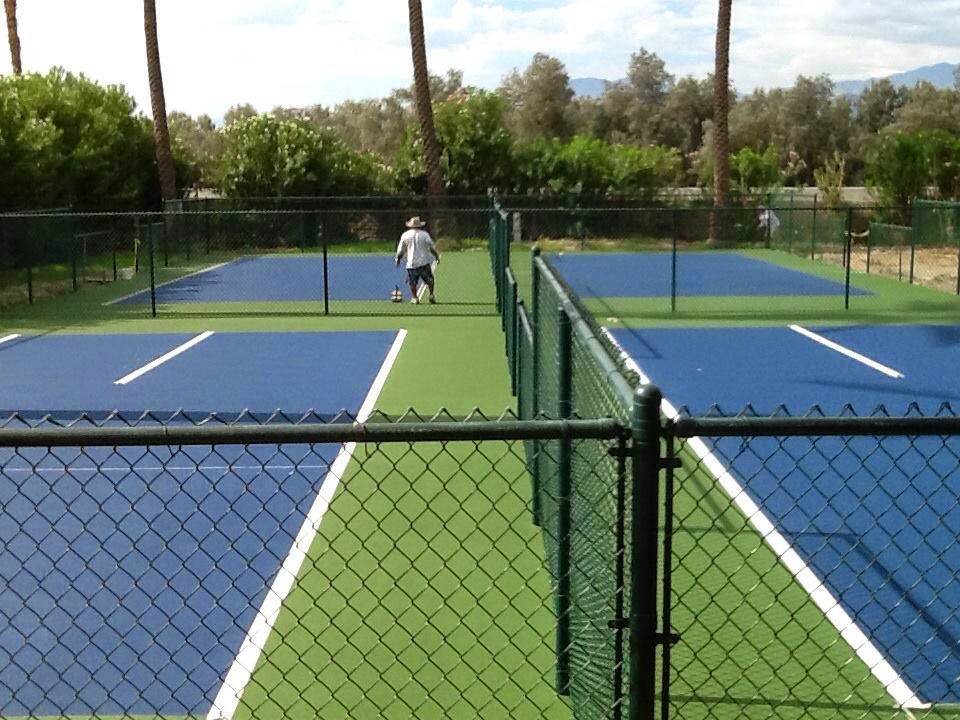 We are all soooo excited!!!!   Hope we will get a chance to play on them!!

Posted by Highway Runner at 11:23 PM No comments:

Mon, Sep 29 - A few weeks ago I called our friends Jack and Ginger and invited ourselves to their home to prepare a special dish -- Crispy Fish With Lemon Sauce.  We have prepared the dish together several times in the past and it was always a hilarious evening with a few drinks and laughs and trying to figure out the complicated Chinese recipe!!

We also invited friends Karen and Dennis to join us.  Unfortunately, Karen was not feeling well and could not be here.

Jack, Dennis, Ginger with the two of us. 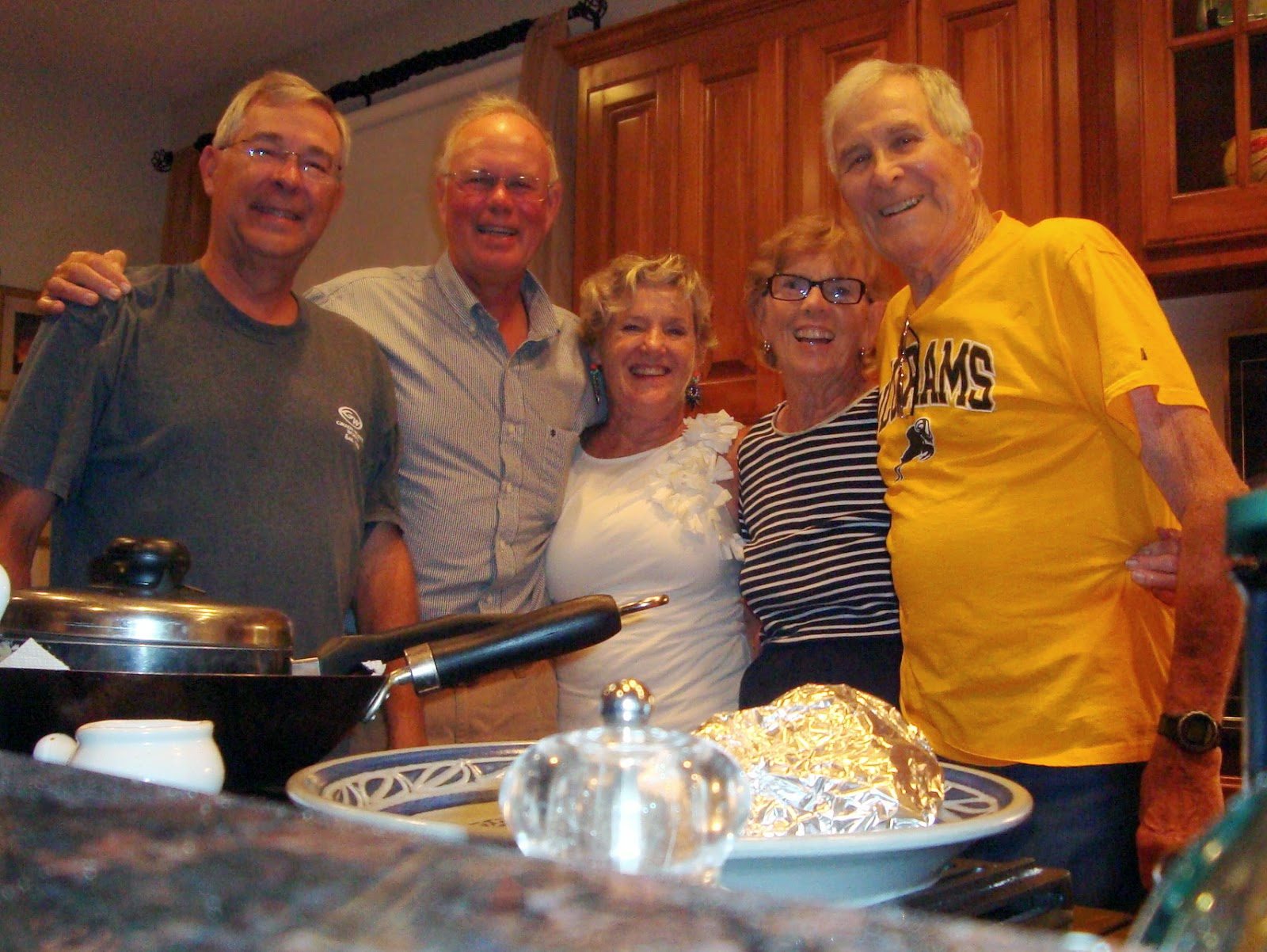 We are always amazed that the fish turns out perfectly and is delicious!  (Picture from the Chinese Cookbook.) 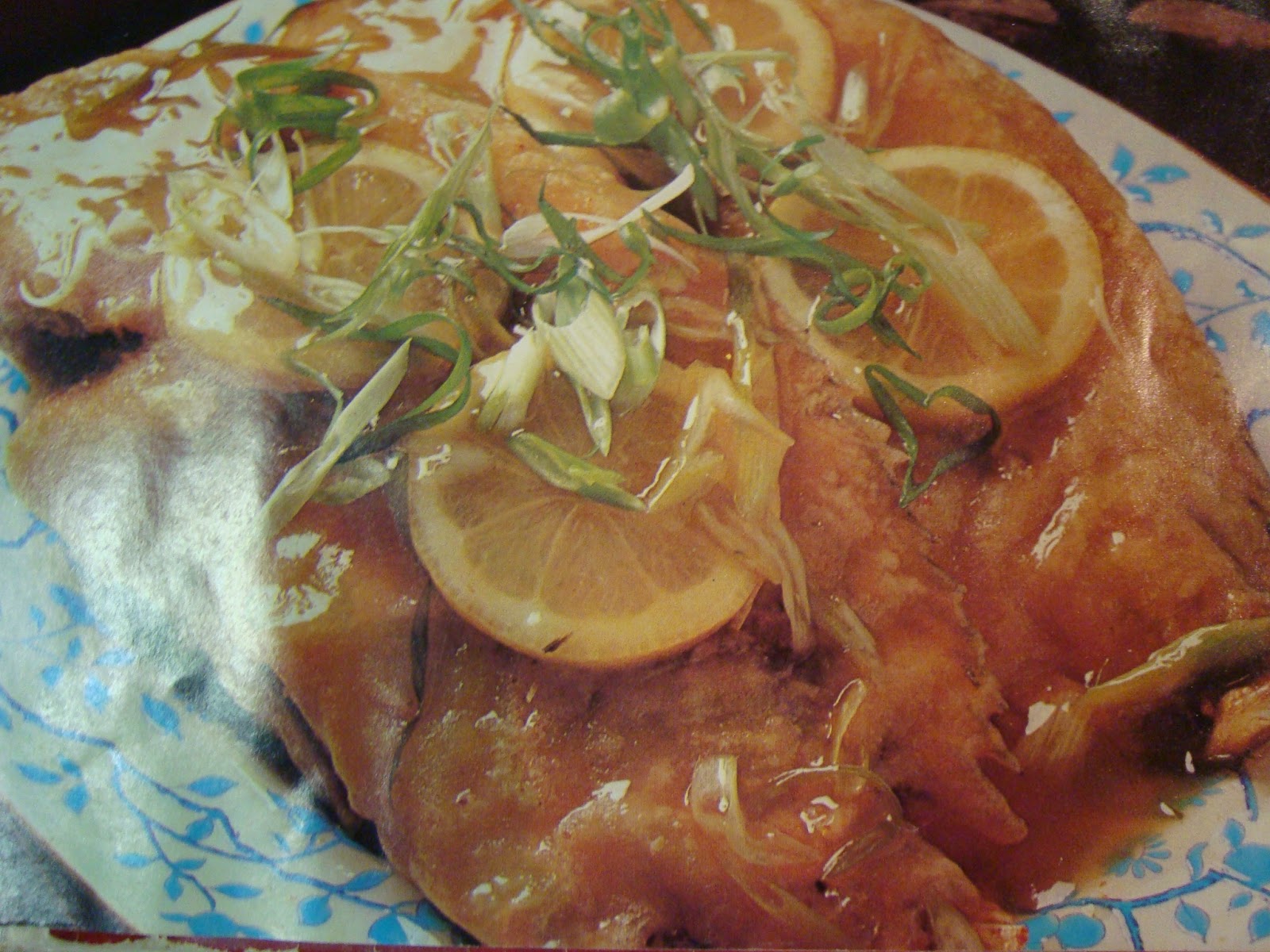 Thanks so much, Jack and Ginger!!  A really fun evening.

Posted by Highway Runner at 11:22 PM No comments:

Ken's daughter Stacey's birthday was in July.  Mike and Diane, Ken and I took her to a great Mexican Restaurant nearby.  Don't know how I missed getting a picture of the group, but -

This is what Ken and I had for dinner!!  We shared the Fajita dinner and still had enough left over for lunch the next day.  (The Fried Ice Cream is a birthday treat for Stacey from the Restaurant.) 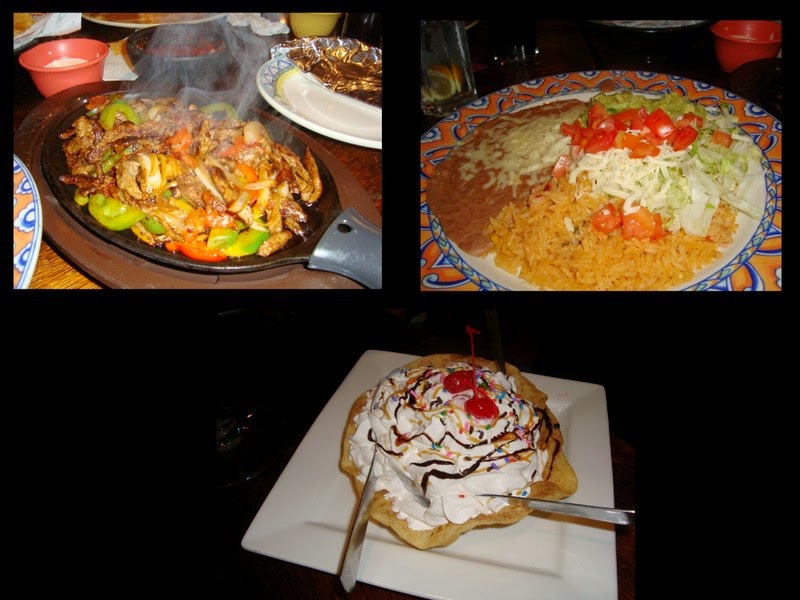 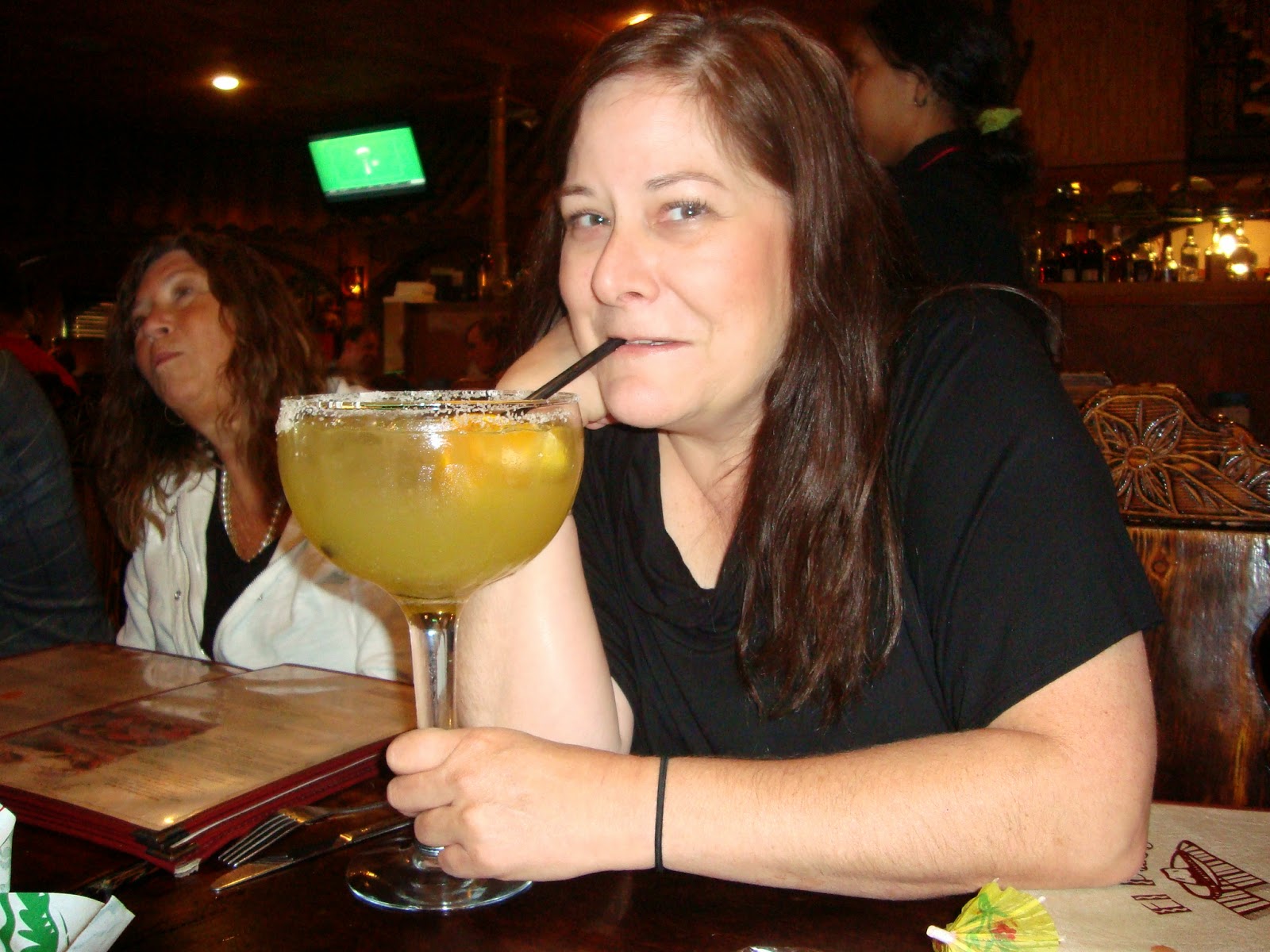 Being serenaded by the Restaurant staff.  Note the biggggg sombrero. 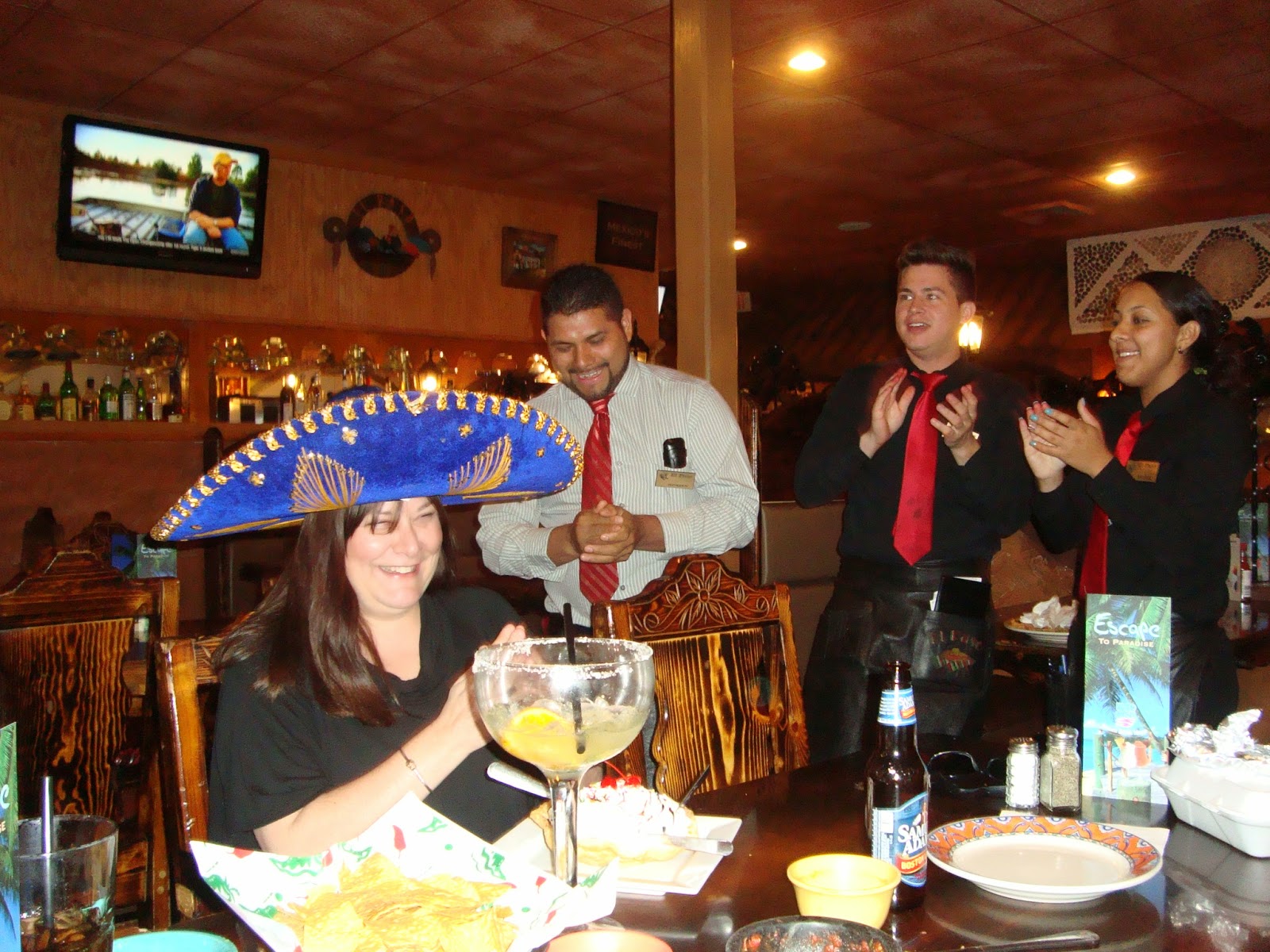 My sister, Beryle had a birthday in August.  The family got together at my other sister, Jean and Bob's temporary apartment to celebrate.  (Note:  Their apartment is temporary because they moved from their home into an apartment while waiting for their new condo to be completed.)

Beryle, her daughter Debbie, Bob, my brother Chip, Ken, Jean and me. 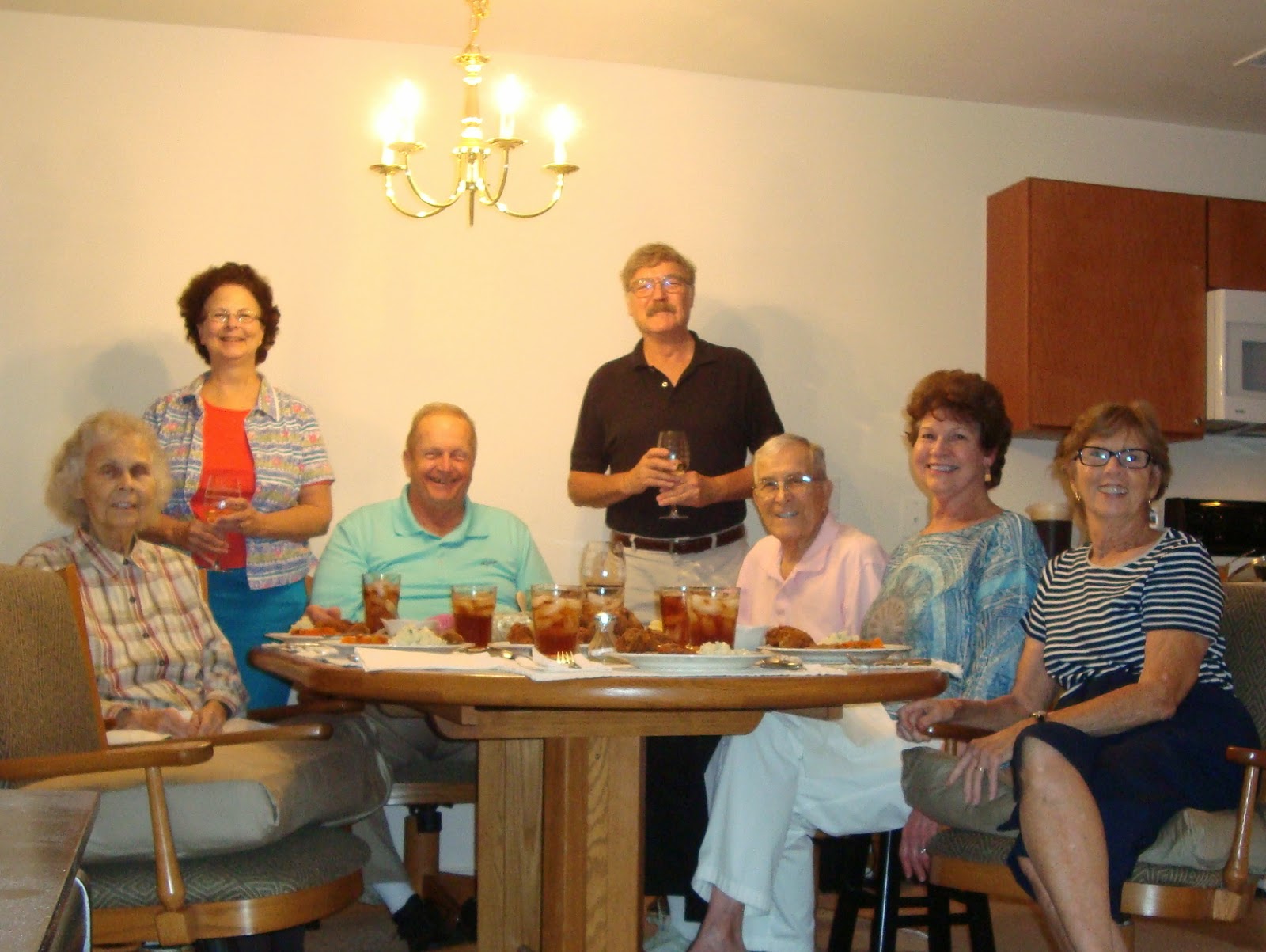 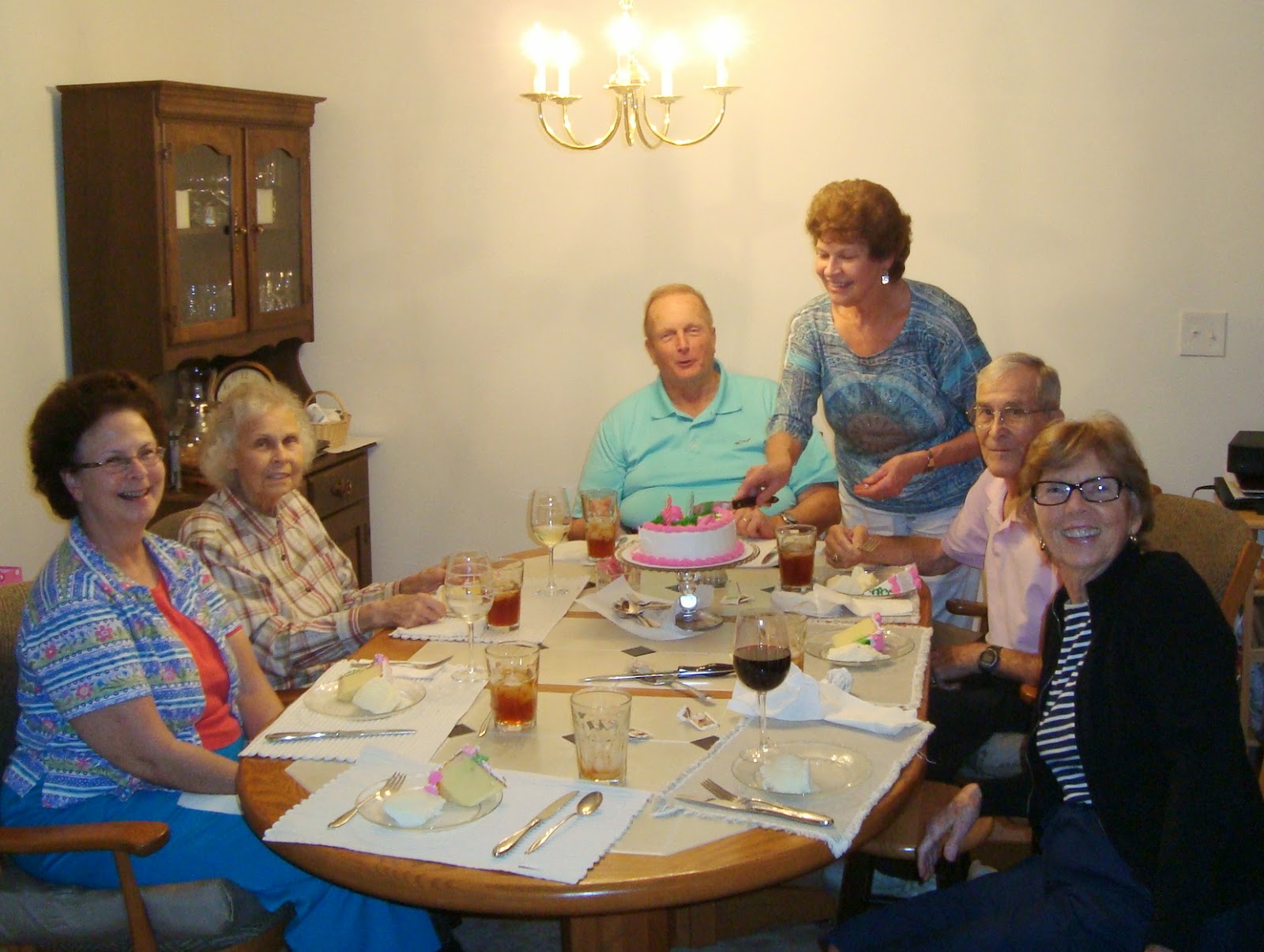 In September, Diane celebrated her birthday!  Stacey brought bottles of Barefoot wine for the two of us because my birthday is coming up soon. 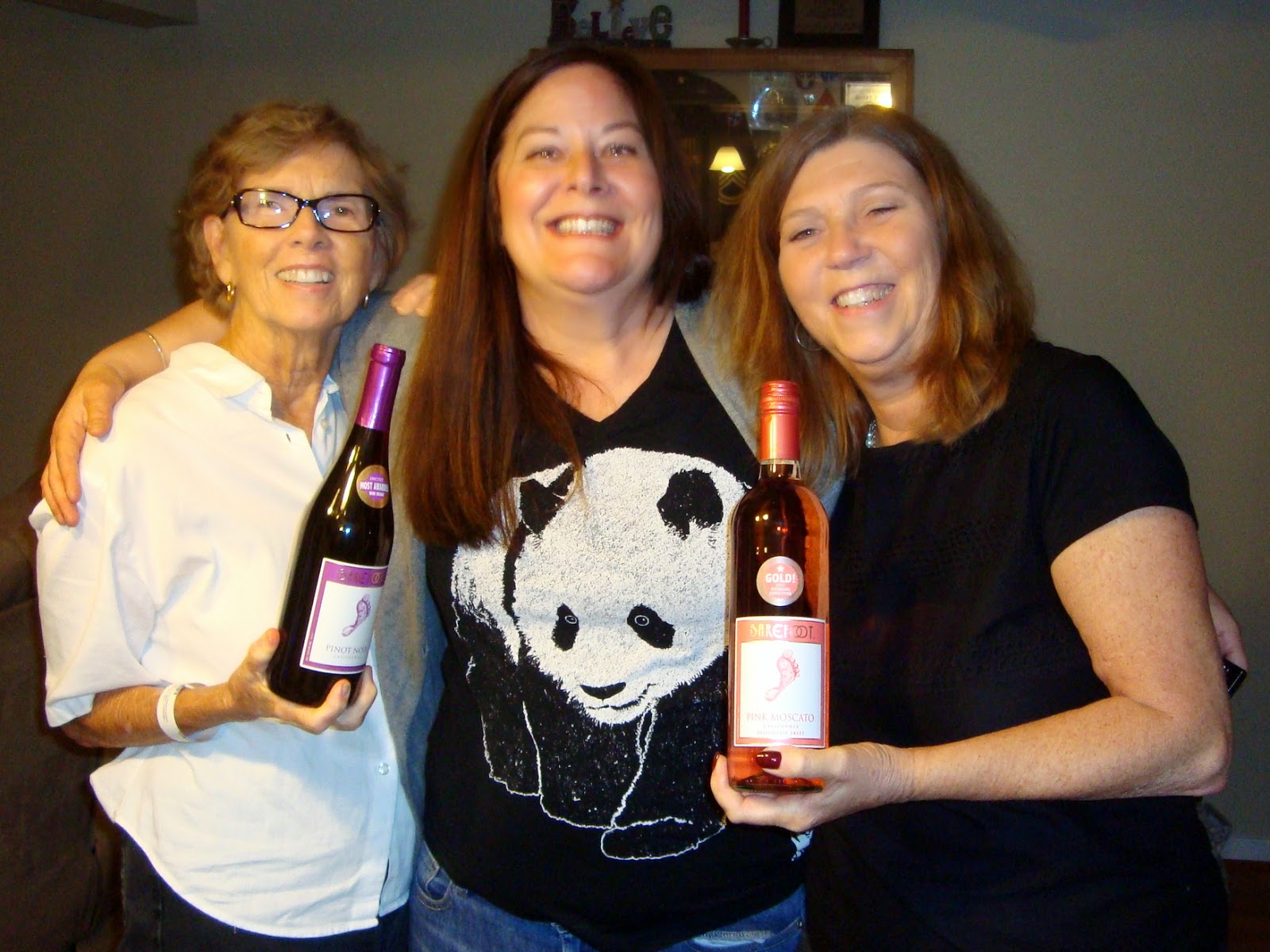 We took Diane and Mike to one of their favorite places to eat -- Glory Days.  Happy Birthday, Diane!!  Looking Good!! 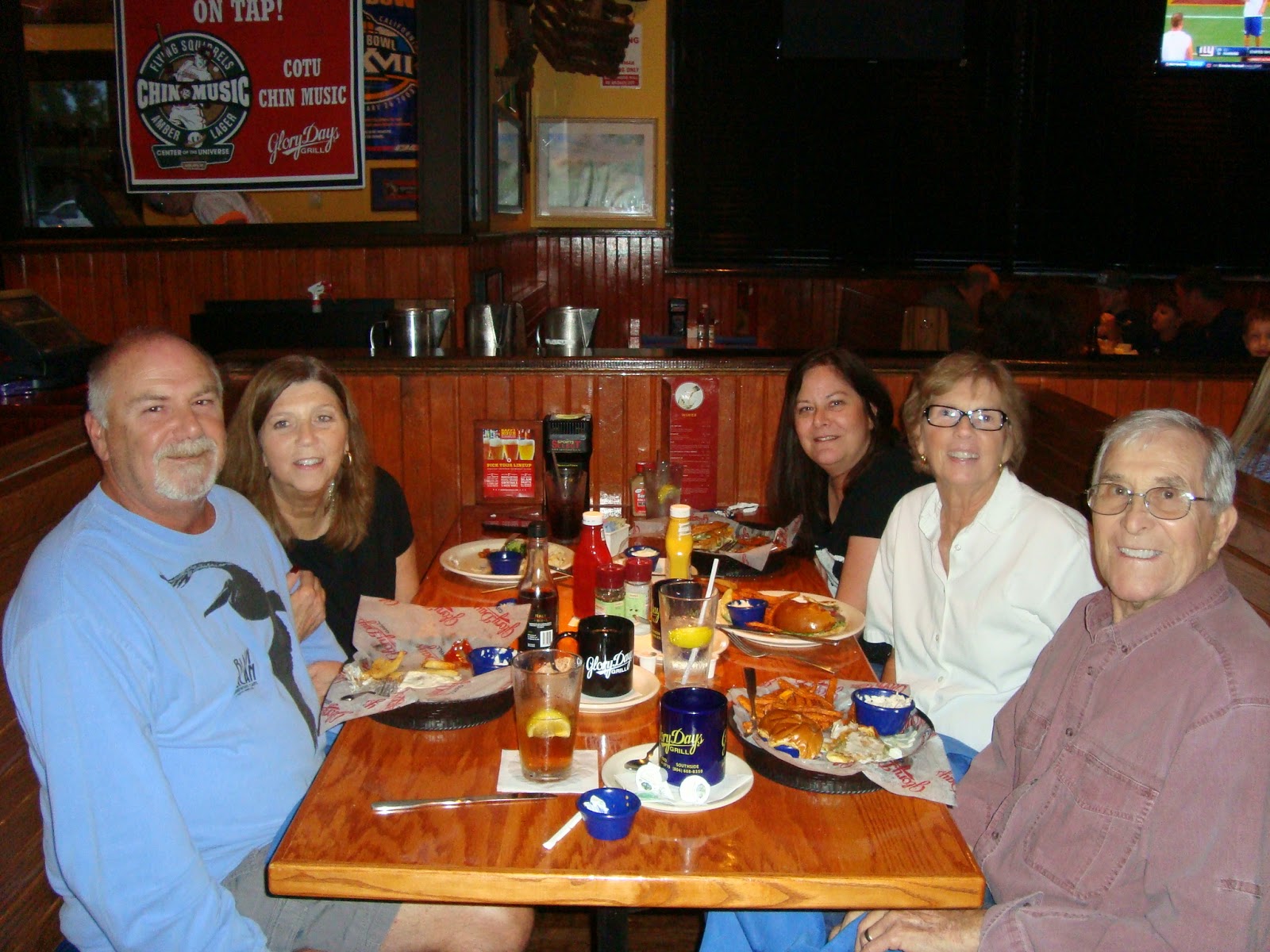 And October 2nd was MY birthday!!  A couple of weeks earlier, we visited my daughter Stasia in Goldsboro, NC for the day.  After a hectic day of our trying to find a tiny little relay fuse for the A/C in our Suzuki, we got together with Stasia and husband, Gene and followed them out to dinner.

They love their little sports convertible!! 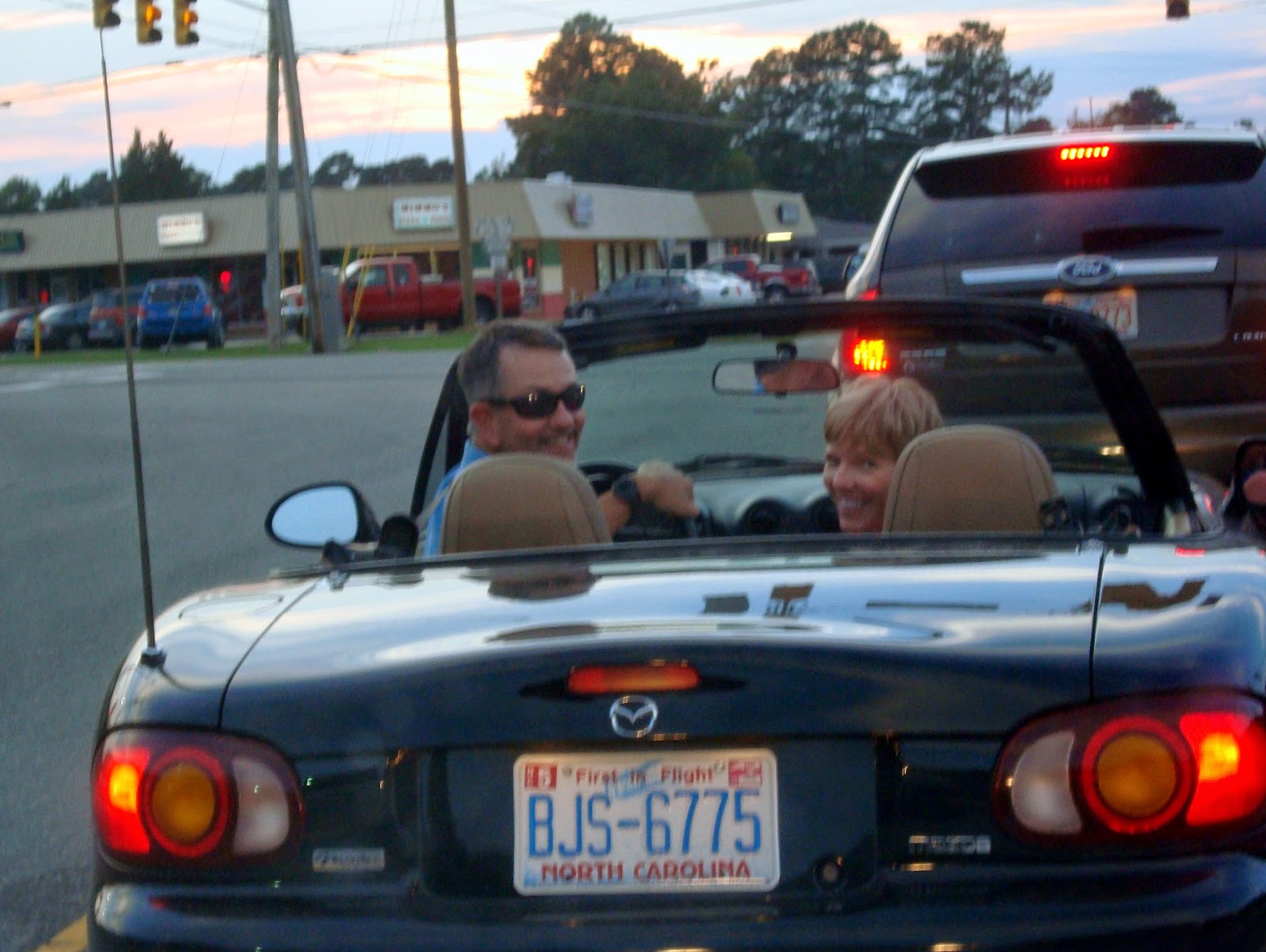 We enjoyed delicious steak at The Texas Roadhouse! 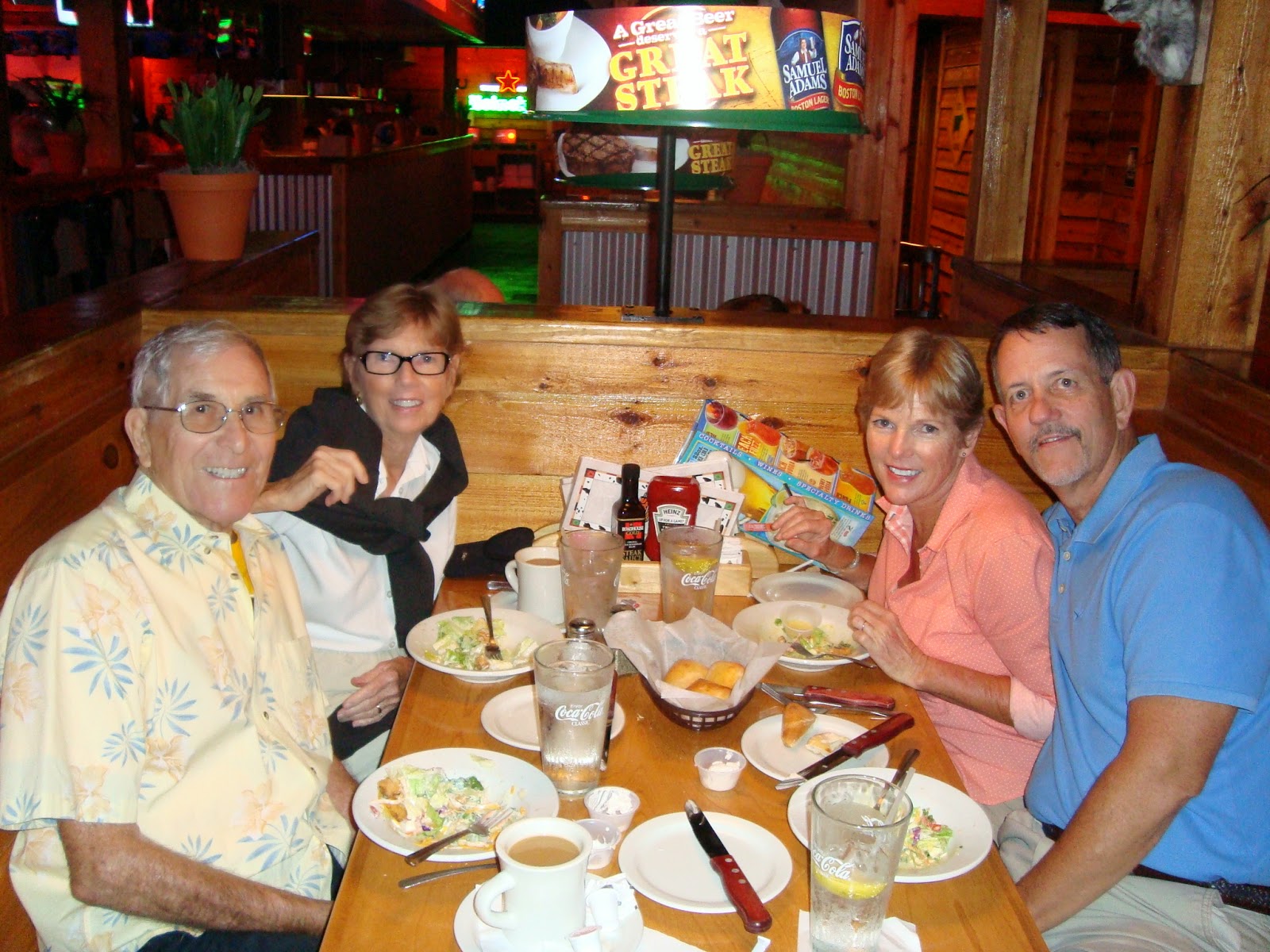 And I got the traditional Birthday Cheer from the Roadhouse waitresses!! 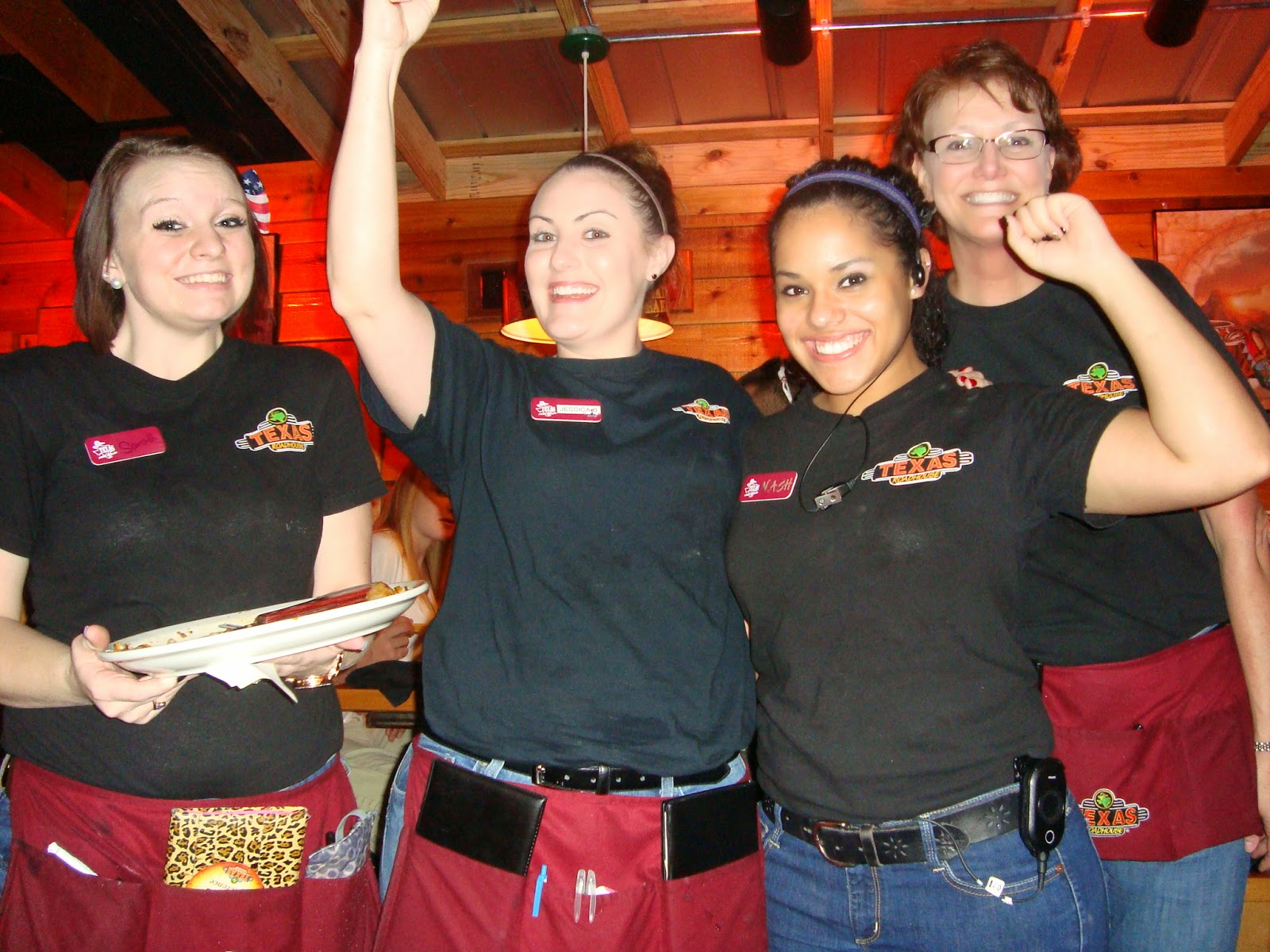 As I said earlier, Thursday, October 2nd was my birthday!!   My sister, Beryle and niece Debbie and I had to attend a morning meeting about Reynolds/Alcoa Retiree Medical Insurance -- on my Birthday!!  Debbie called me the day before and invited me to Birthday Breakfast at Cracker Barrel before the meeting. What a surprise!!  Breakfast was delicious, but unfortunately, I didn't get any pictures!  Thank you Beryle and Debbie for my starting my birthday on a happy note!

We all went to the meeting which lasted into the afternoon.  No good new there!!

Back in the motorhome, about 3:00 o'clock in the afternoon, I was filling out a form (but mostly dozing), when suddenly I felt two hands on my knees.  A sweet voice said, "Happy Birthday to You!"   Who is that!!??  I looked up.  It was my daughter, Stasia!!!  She had driven up from North Carolina to spend the afternoon with me -- for my Birthday!!!  I was sooooo SURPRISED!!  She was supposed to be on a rafting trip with a group from her work with Parks and Recreation!!

As it turned out, the rafting trip was cancelled.  She decided she would spend the day with me instead!  She was on the phone with Ken several times.  Talked to sister Jean and niece Debbie.  Even talked to Mike and Diane trying to figure what time she needed to be here!!!  Unbelievable!!  Not a hint of anything from any of them!!

Later in the day we went over to Mike and Diane's for Happy Hour.  Then we all went out to dinner at P. F. Chang to celebrate my birthday and Diane's birthday since her's was just the week before!  What a great dinner!! 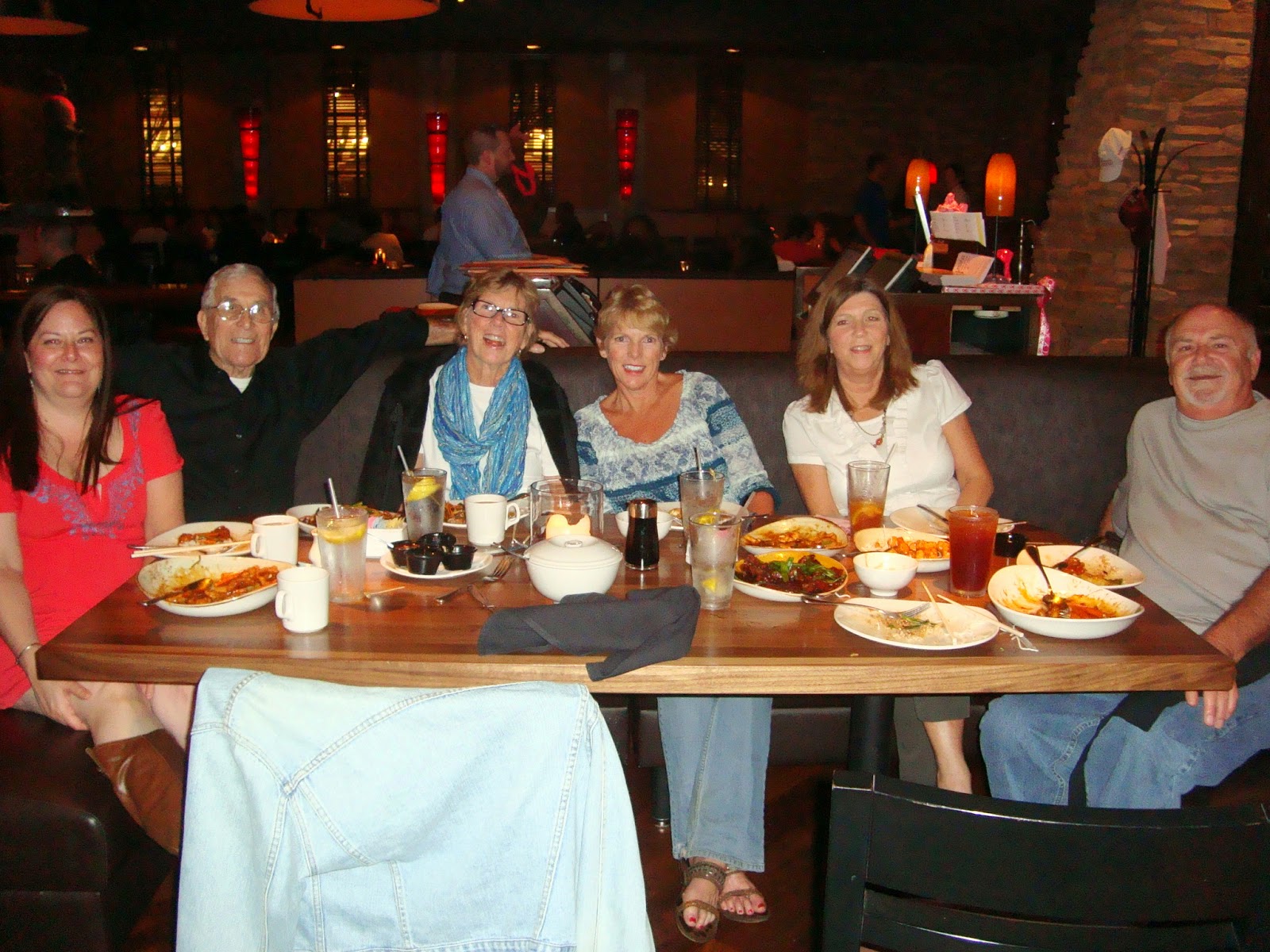 The restaurant gave a choice of dessert to both of the birthday girls!  I wondered why Ken told us we did not need the desserts??!!  But they are FREE!!  And we shared with everyone at the table.

Later when we got back to Mike and Diane's after dinner, Ken brought out a big Birthday Cake for me!!  Now I understood about the desserts at Chang's!! 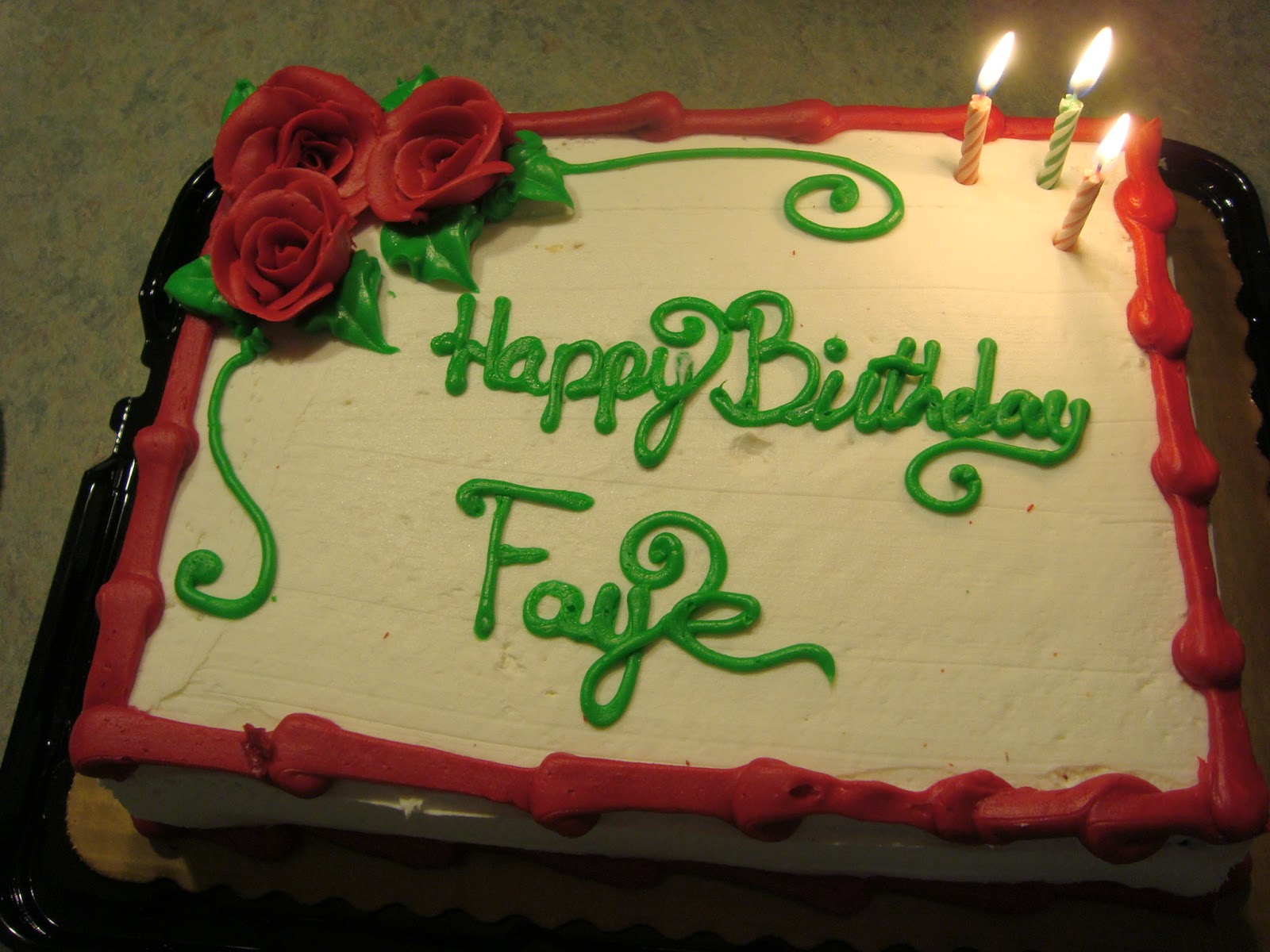 But the evening was not over!!  Ken, Diane, and Stacey had to sing "Happy Birthday To You" to ME!! 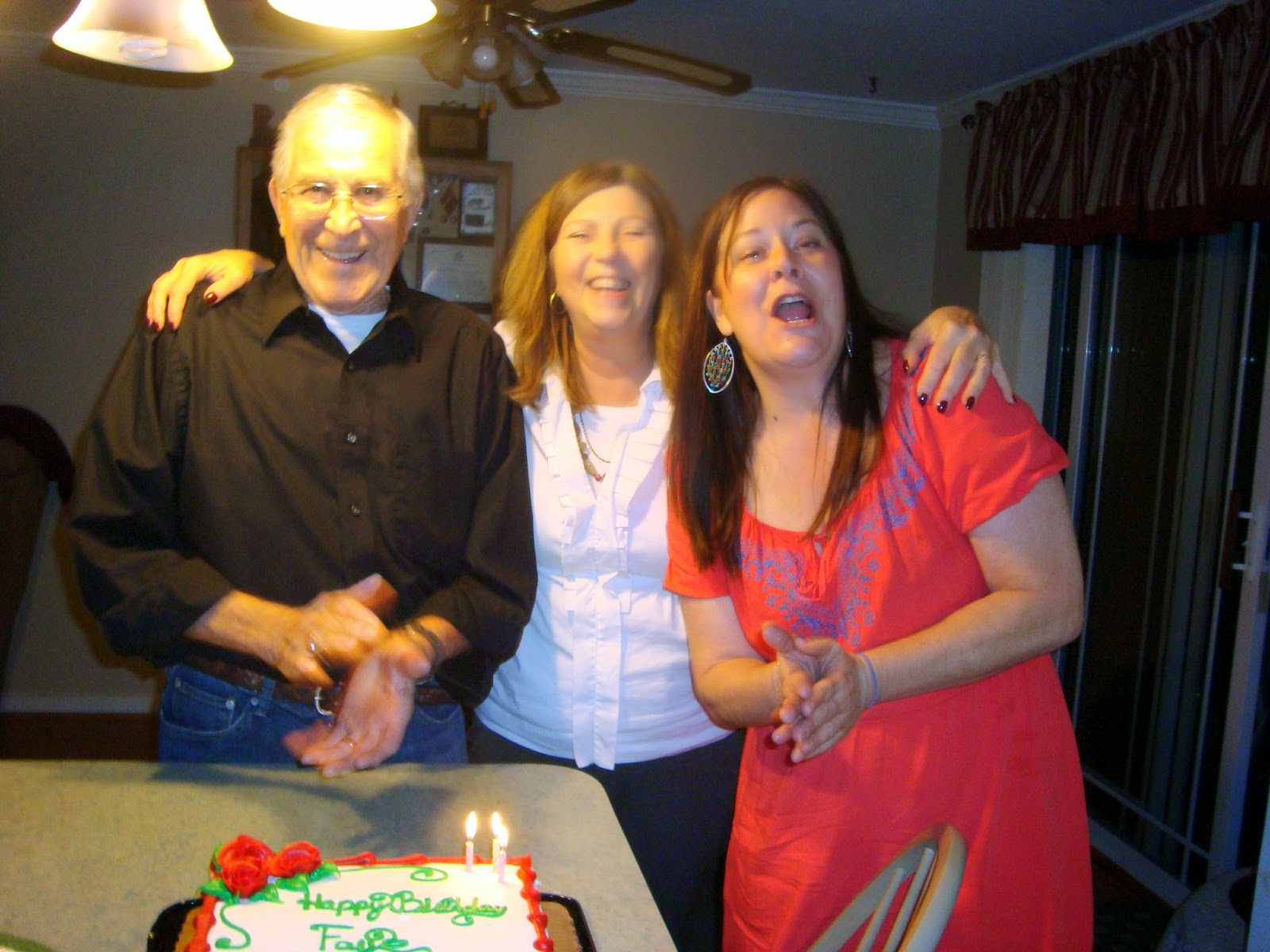 Thank you everybody to making my birthday a Very Happy Birthday!!!

Posted by Highway Runner at 11:21 PM No comments:

Sat. Oct. 04 - This past week my sister, Jean and her husband Bob moved into their new condo in one of the most amazing new retirement communities, Covenant Woods.  Description from the Covenant Woods website:

Covenant Woods is a fully accredited Continuing Care Retirement Community nestled in Mechanicsville, VA.. . .  designed as a community where people come to enjoy their life and their independence, Covenant Woods makes it possible for you to free up time formerly spent on chores and home maintenance, and devote that time and energy to the pursuit of life-long or brand new interests and passions. When you move into an independent living apartment or cottage, you have the comfort of knowing that assisted living, memory support and nursing care are available should your needs change.

Jean and Bob certainly do not need the assisted living services yet but there are plenty of activities to keep them busy for many years to come! 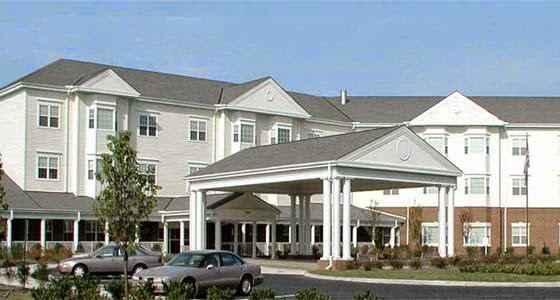 On Saturday, Ken and I went to visit them and took some of Ken's pulled pork Bar-B-Q.  The plan was to see their new place, have a quick lunch and leave so they could get back to work unpacking, etc.  When we arrived; however, some friends of theirs were already there.  So, we sat around and ate and talked all afternoon!!  Guess they didn't get much work done that day!

Jean and I in the lobby of their building. 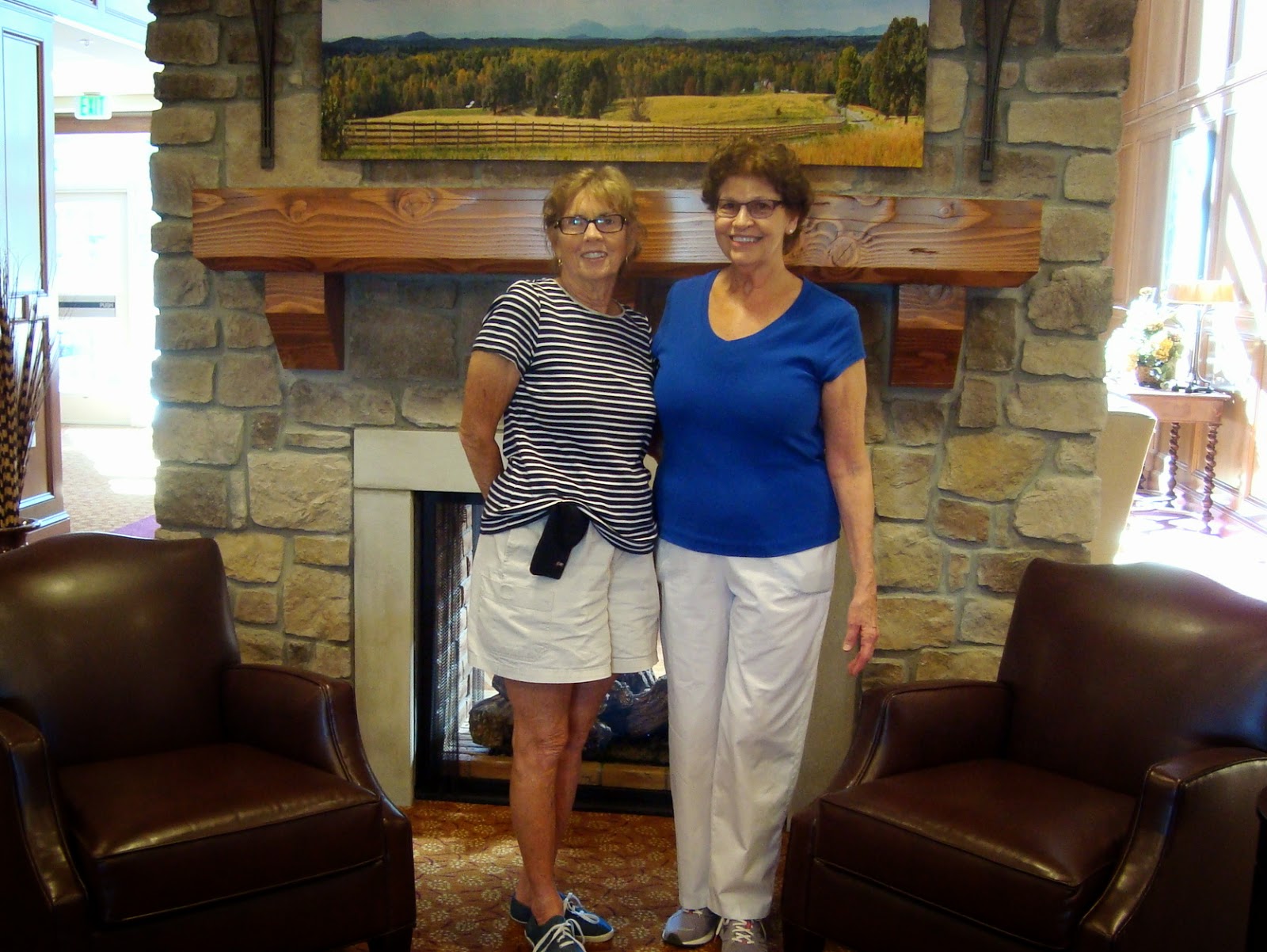 Congratulations on your new home, Jean and Bob.  We wish for you many happy years there!!
Posted by Highway Runner at 11:20 PM No comments:

Sun, Oct. 12 - I don't know how they remembered that Saturday, October 11, was Ken and my anniversary, but they did!  Dennis and Karen called and invited us to brunch at Willaby's Cafe on the Rappahannock River.

We all enjoyed a delicious meal, but before eating -- We discovered that one of the neat things about the Willaby's Sunday Brunch is the extensive Blood Mary Bar where you make your own Bloody.  The bartender poured vodka in the bottom of your glass and you add your own mix from a choice of about five different mixers.  Then the garnishes provided were numerous:  hot sauces, limes, olives, jalapenos, celery, pickled okra, etc. etc. etc.  Great fun!! 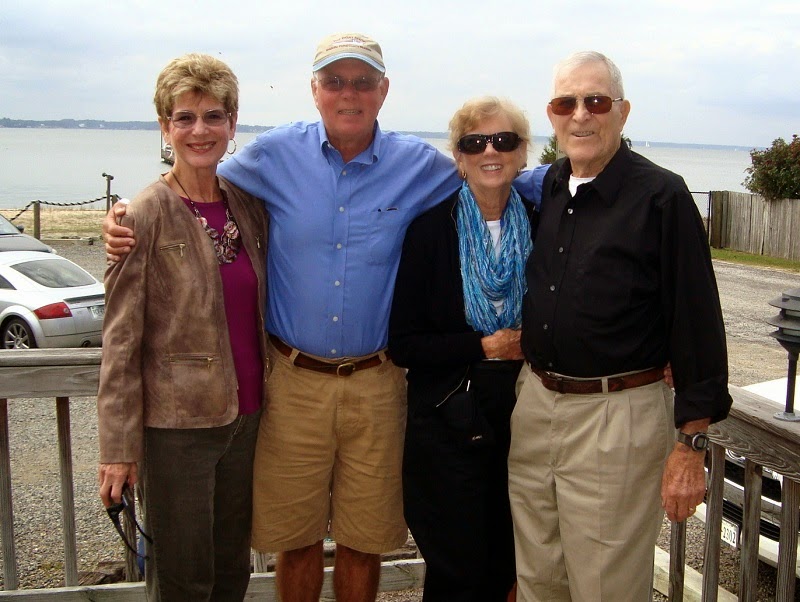 Thanks so much Karen and Dennis for such a nice anniversary treat!
Posted by Highway Runner at 11:19 PM No comments: