SHELF FOR OUR NEW HOTPOINT REFRIGERATOR

Oct. 08 - Back in April I posted an article about our having a new residential Hotpoint Refrigerator installed in place of our defunct Norcold.  The new Hotpoint has worked out just great.  Only one problem!!

The freezer is quite large, with an ice maker that we had installed.  There were no dividers or shelves in the freezer.  As a result, I had to pile all of the frozen foods into a refrigerator drawer that I kept from our old Norcold for use in the freezer.  Not very practical; a lot of wasted space!!.

When we were buying our new Hotpoint at Home Depot, we noticed a similar refrigerator with a shelf in the freezer.  We tried that shelf in the floor model of our Hotpoint that, while it had the holes in place for a shelf, there was no shelf.  It worked perfectly.  But, we could not buy that shelf.  I went on line and found a shelf that looked like it would work but the Hotpoint representative did not have measurements for the shelf on line and did not show a refrigerator of the same ID as the one at Home Depot with the shelf.  I put the project on hold for a while.

We went back to Home Depot and the store clerk placed an order for the freezer shelf to be delivered to us at TT Palm Springs.

When we arrived at TT Palm Springs on Friday, our shelf was waiting for us!! 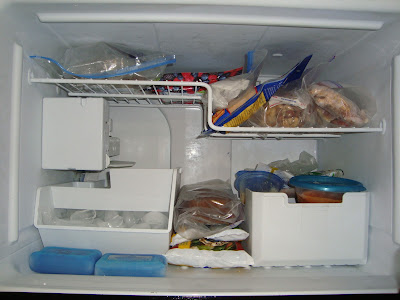 ﻿
﻿I am so glad we stuck with this project!!  It makes a bid difference in our freezer space!
﻿

Posted by Highway Runner at 3:00 PM No comments:

Thur, Oct 11 - It was our Anniversary!!  We woke up this morning in the parking lot at Temecula Valley RV where we were waiting to have our 6-month old toilet repaired!!  We finished up with the repairs at about 3:00 PM and returned to our RV site at TT Wilderness Lakes.  Although the staff at Temecula Valley RV was very nice and friendly, wished us a Happy Anniversary, etc., it was not the way we would want to celebrate our anniversary!! 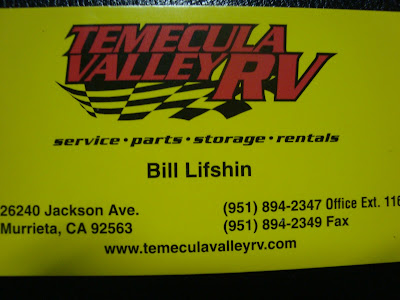 When we got home, we were exhausted from doing nothing!  Did we really want to go out for our Anniversary!!??  Ken was watching TV;  I went on line to see if I could find any restaurants nearby that we wanted to make the effort to go out to.  The first restaurant on the list was Texas Roadhouse!  HMMMM!!  I read some of the Reviews.  All of the Reviews were positive -- friendly atmosphere, delicious steaks and salads, "call-ahead" seating, Early Bird Specials until 6:00 PM.  The restaurant was only about 2-3 miles from TT Wilderness Lakes.  We felt like we could go as we were.  What more could we ask for??!!!!

We called ahead for 5:00 PM seating and mentioned that it was our Anniversary.  The receptionist sounded genuinely excited for us and gave us a confirmation number that we were to give the hostess when we arrived. 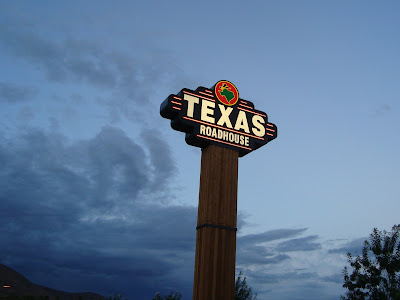 The minute we arrived we picked up on the atmosphere of FUN!  When we gave the hostess our confirmation number, she said, "Oh, you have an Anniversary!!  Congratulations!!"

A very nice, friendly gentleman greeted us and said he would show us to our table.  He first pointed out the beautiful steaks available to diners, and the hand-made sweet rolls that had just been pulled from the oven!  He grabbed a basket full for us. 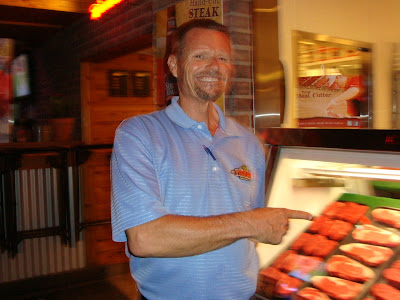 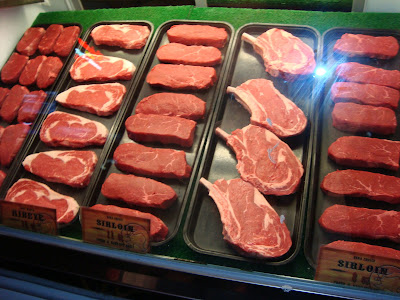 When we arrived at our table, I mentioned that we were interested in the Early Bird Specials.   The booth was so large that Ken and I sat together on one side.  The gentleman slipped into the seat across from us and proceeded to explain all of the the Early Bird Menu options.  He was so friendly, I had to ask his name.  "My name is Keith.  I'm the Owner."!!!  You could tell he really Loves His Job!!  (All of the servers wore t-shirts that said, "I love my job" with a big red heart.)

Sidebar:  I had read on line that the Manager always made certain to stop by each table to greet the diners.  I never expected he would actually sit down with us!! 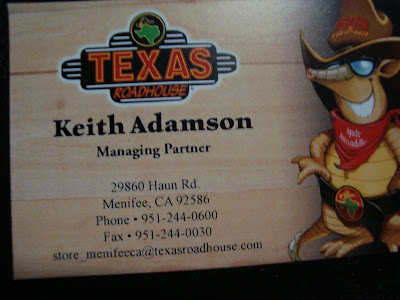 The basket of delicious sweet rolls!!  Ken and I had already eaten a couple.  They were amazing!! 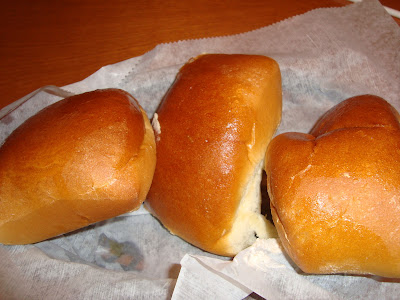 A bucket of peanuts waited on the table for us to munch before dinner. 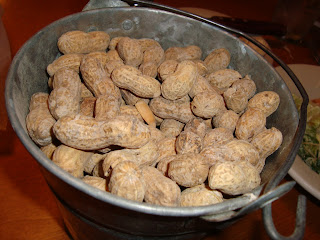 On line I had read a recommendation for the Cesar Salad. It was fresh and delicious! 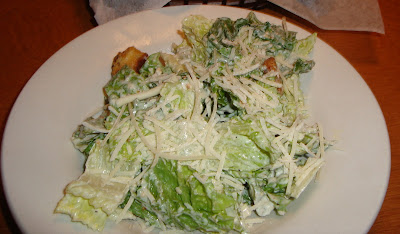 Our Waitress, Holly, was just as friendly as Keith had been. She scooted into the seat across from us and explained about their steaks and how to order to get the exact doneness we desired.

From the Early Bird Menu, I ordered the 6 oz. Sirloin, Ken ordered the 11 oz.  As the reviews had stated, the steaks were tender, juicy, and flavorful, and cooked to perfection!

Ken and I had already eaten a portion of our dinners before I though about taking a picture! 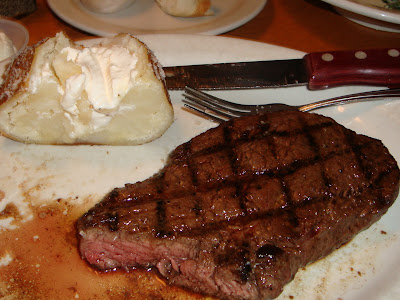 Here we are, enjoying our Anniversary dinner!! 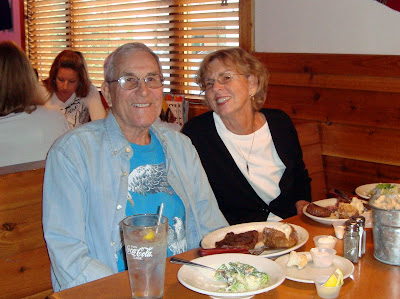 At the Texas Roadhouse, it is tradition for the staff and patrons to help you celebrate your Birthday or Anniversary.  Holly pulled up a Saddle on a "horse" beside our table.  Ken helped me straddle the saddle while the staff gathered around.!   Holly announced, "Faye and Ken are celebrating their anniversary!!  Let's give them a Big YA HOO!!!"  Everyone in the restaurant yelled out "YA HOO!!!"

A couple of the waitresses standing behind us after the celebration! 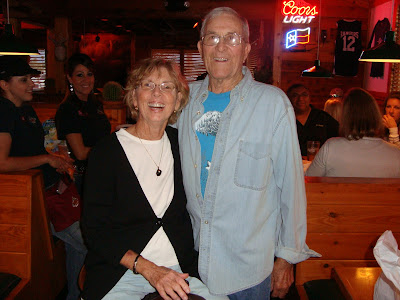 A second picture so you can see the saddle and know that I'm An Old Cow Hand!! 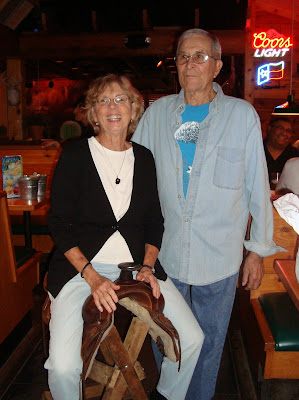 Holly had rounded up our bus boy, Anthony and arranged for him to be the photographer! 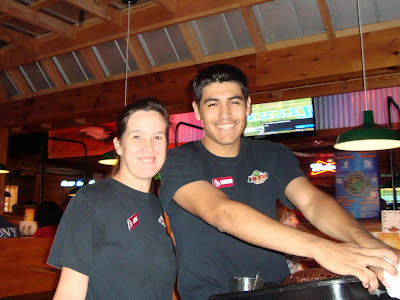 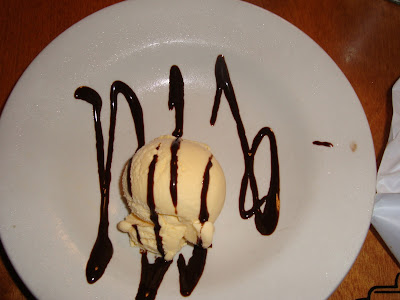 What a great night out we had!!  Our dinner at Texas Roadhouse was so good, and so much fun, it felt more like a first date than at Thirty-Third Anniversary!!!

Hope you friends who come to TT Wilderness Lakes will drop by Texas Roadhouse sometime soon!!  Tell Keith that Faye (with an E) and Ken sent you!!

Sidebar:  I recommend you go to their website for ideas on what and what not to order.  We stuck to the simple sweet rolls, steak, potato and salad.  It was all scrumptious.  Can't speak about other dishes, .  Also, we arrived at 5:00 PM on a Thursday.  Although there were a lot of customers, there was no waiting for us.  Apparently, other times may be busier.  Be certain to check the Reviews for the one located in Menifee, CA.  All Texas Roadhouses are not the same!!

Posted by Highway Runner at 1:33 AM 2 comments: