Jan. 06 - A number of Thousand Trails Pickleball players had registered to play in the Second Annual Pickleball Tournament at Mission Hills Country Club community about five miles away. They were all excited about playing!
We missed the women's doubles tournament on the first day but went the second day for the men's doubles. Here is some of the action we saw:
Jack and Roger were playing when we arrived. These two ended up winning Gold in their level. Congratulations guys!! 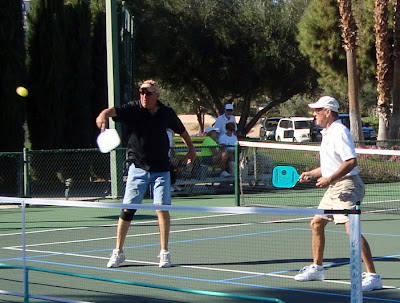 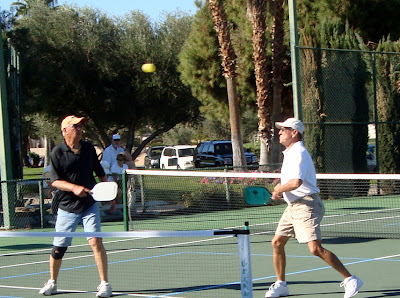 Rick and Jim P. were in their first match. 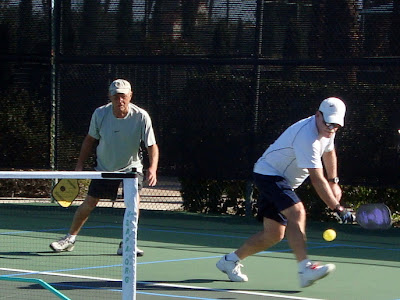 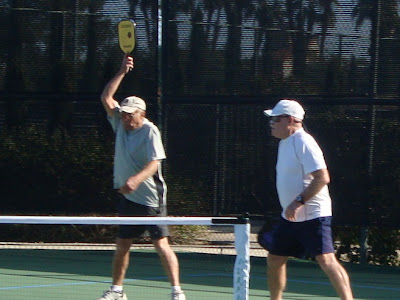 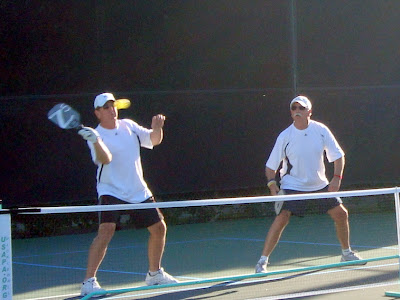 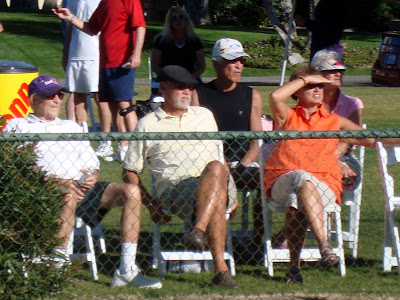 Dean and Rich in their first round. 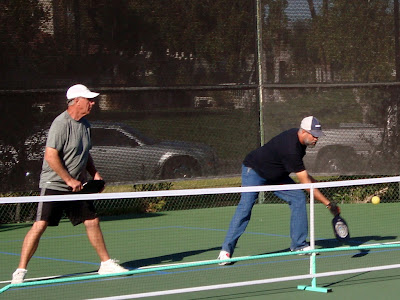 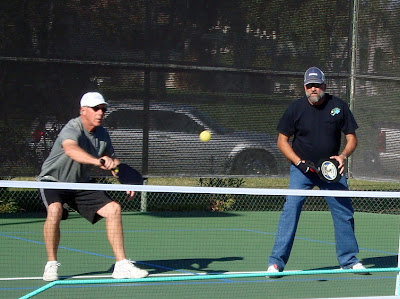 Frank was not competing today but he made a great referee! 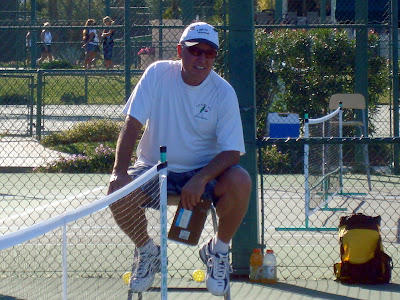 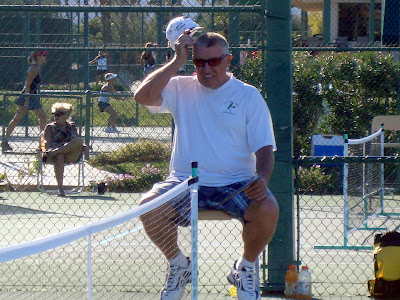 Following the men's doubles, there were the women's singles matches.
An acquaintance Rosie. She is amazing! 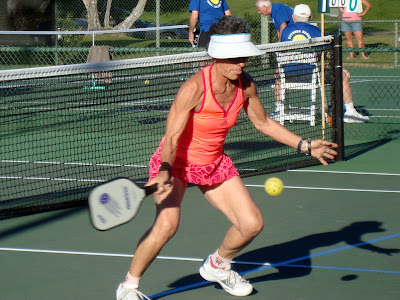 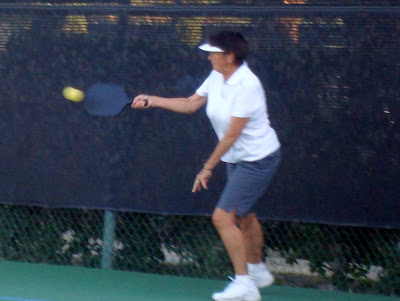 Here we are enjoying the matches. Note the preppy shirts with collars appropriate for the Country Club venue! HA HA 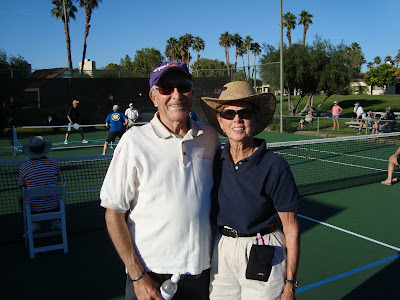 Chuck and Jessie rode with us. Jessie participated in the tournament but today she is enjoying the men's doubles! 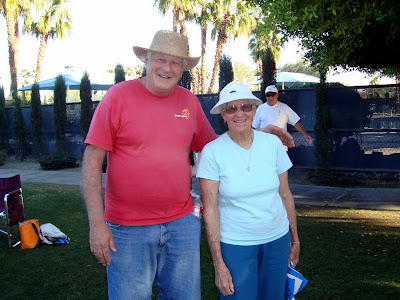 On Saturday, the third day of the tournament, they featured the mixed doubles matches.

Jack and Diane participated but we missed pictures of them in action. 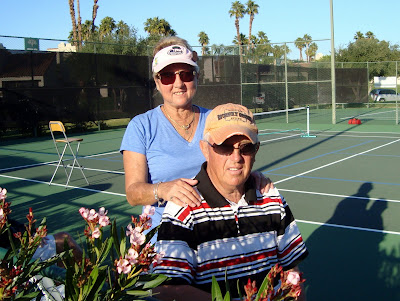 Rick and Linda in a close match. They ended up winning Silver! Congratulations guys!! 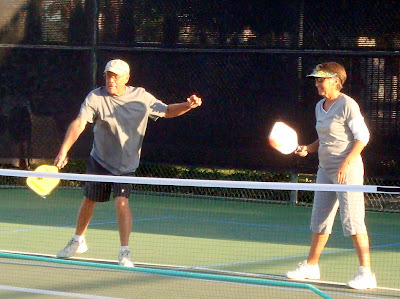 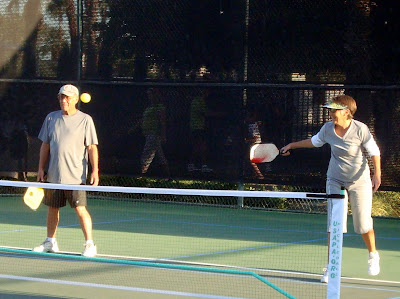 Rich and Dee won this match. 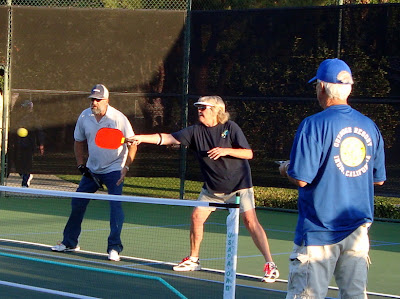 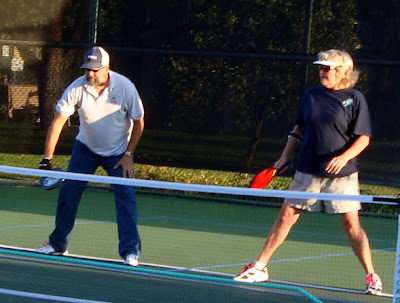 My special, special Pickleball student; my claim to fame!! Ken and I taught Judy to play and enjoy Pickleball. Now, she is a great player and competes in lots of tournaments!! You go Judy!! 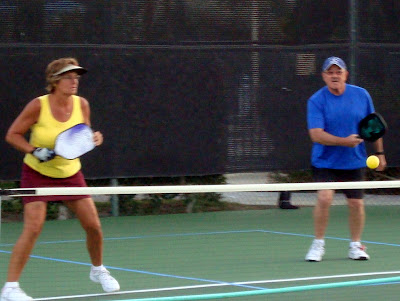 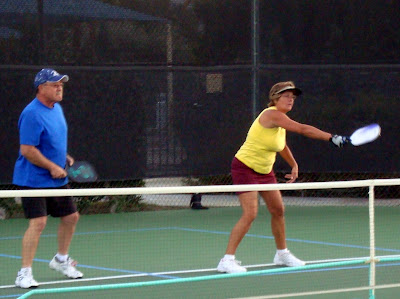 We had a great time at the Mission Hills Pickleball Tournament!! Congratulations to all the participants and winners!! Loved it!!
Posted by Highway Runner at 10:51 PM No comments:

TOM AND MARION TOM COME FOR MARGARITAS AND TACOS

Jan 05 - We have been special friends with Tom and Marion for years; ever since the fall of 2002 at TT Verde Valley on the Pickleball courts! We have had so many good times with them in the past. We don't see Tom and Marion at Thousand Trails very often any more since they have a place at Quail Valley in Desert Hot Springs. And we miss them!!
Today we invited them to our place for margaritas and tacos! Brought back good old times!! 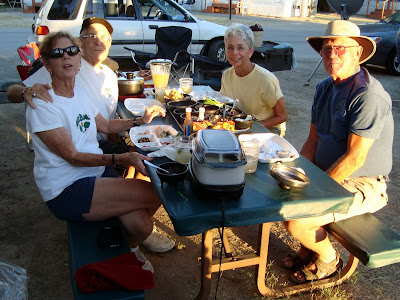 It was such fun having dinner with you guys again!! Thanks for coming.
Posted by Highway Runner at 12:00 AM No comments:

New Year's Eve - TT Palm Springs actually had two New Year's Eve parties. One was in the Family Lodge for everyone who was not able to purchase tickets to the real New Year's Eve party! Tickets were only $5 with everyone bringing appetisers for the food table to share with everyone.
A group of Pickleball players decided to go and bought our tickets early. It's a good thing because tickets were gone in a couple of days! That evening we had two tables together, 13 people. Diane sort of spearheaded the gathering. She suggested in addition to bringing food to share with everyone, we could have a few snacks to have at our table. You know, nuts, pretzels, little nibbles like that.
Well, here is a look at our table!! 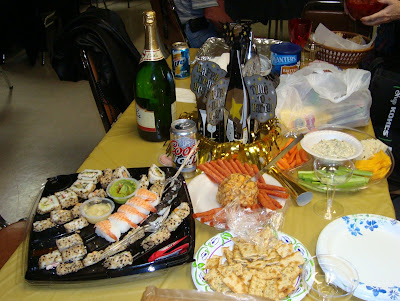 The party got started early. Ken and Jack already acting silly. Ken has a "sweet" tiara; Jack has one tiara on his hat and made a beard with a second one! 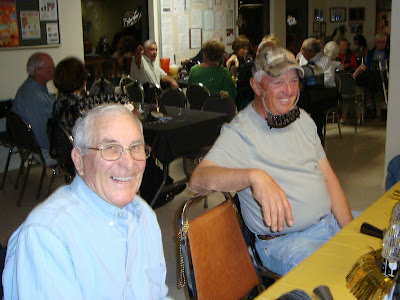 Rich was not to be outdone. The table center piece makes a good hat!! Diane is beautiful with her tiara. 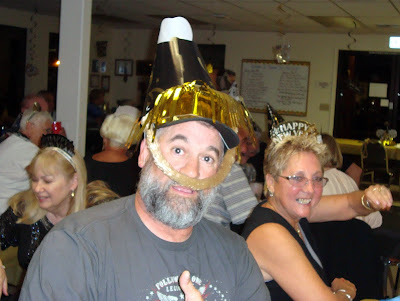 Here is a picture of one table. Diane's mother Mickey, Margie, Dean, Bill, Delores, Dee, Rich. That's Matt with his Biker shirt to the far right! 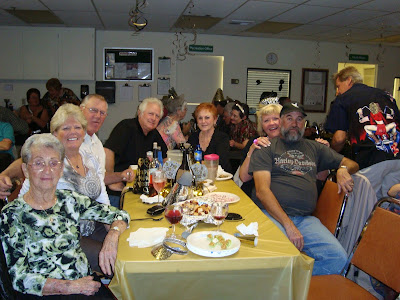 Close up of the Biker shirt!! Matt really knows how to dress for New Year's Eve!! The shirt made us immediately think of our friend, Bee Jay back home!! He'd love that shirt!! 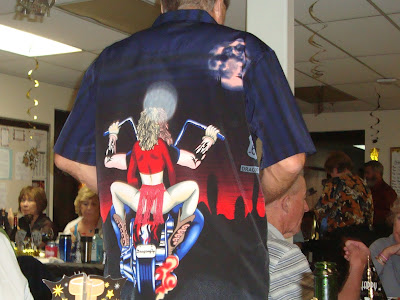 Later in the evening, the crazy guys had a Wasabi challenge with the Wasabi from the Sushi platter!! Matt started by eating a dab of Wasabi off his finger. "Do that!" he challenged Dean and Rich. They kept the table in an uproar trying to determine who could handle the largest dab of Wasabi!! I don't know who won the challenge! They were all crazy as far as I'm concerned!!
We missed out on the big table picture, so here are Faye and Diane with Jack. 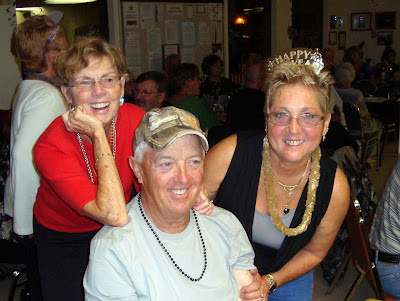 Friends of ours, Bob and Muriel, to the right, and another friend of theirs at the far left. They said later that they did not make it until midnight!! Party Poopers!! 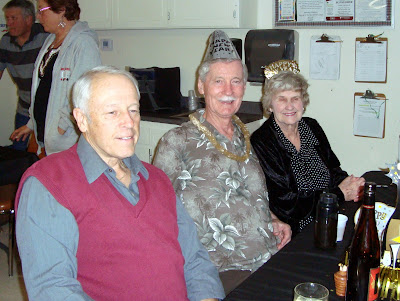 This is the band. Not real good dancing music, but at least they were lively. 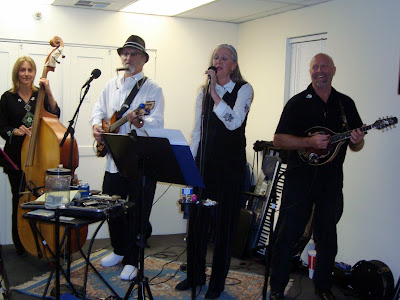 Well, most of our group did make it until midnight and danced the last song!! The party was a lot of fun!
HAPPY NEW YEAR EVERYBODY!!
Posted by Highway Runner at 12:58 AM No comments: