February 14 – About a week ago Ken surprised me and said, “I’d like for us to go to the Jacaranda Hotel for their Valentine Buffet this year”. We had gone with a group from TT Peace River a couple of years ago. Quite nice.

But that was not to be!! NASCAR was having the first big race of the season, The Daytona 500, on February 14 at 1 PM. It has been such a long, long time since with final race of the 2009 season. So, Ken cancelled on me to watch the big race!!

But then Sally called and invited us to Torrey Oaks for their Valentine’s dinner/karaoke/dance which did not begin until 5:30 PM, plenty of time for the race to be over!! However, there were some issues with potholes in the track at Daytona so the race was delayed for almost two hours. But, Stan recorded the race and we went to dinner anyway!! The guys watched the race later.

Here we are at dinner at Torrey Oaks. Notice the drink I am pouring. It’s Ru’s Sangria!! Ru is the Assistant Manager at TT Chesapeake Bay. She introduced me to her Sangria this past summer. I thought it would be a good Valentine’s drink to share with our friends at the dinner. It was a BIG HIT!!! Thanks, Ru, for your recipe!!! 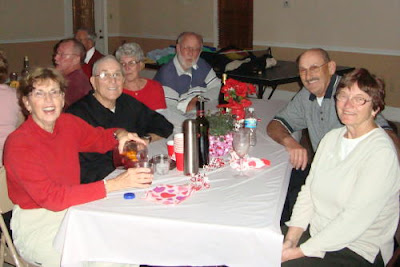 At the table next to ours were some of the ladies (and the husbands) who are in the Line Dance Class I have been leading on Tuesday and Thursday mornings. 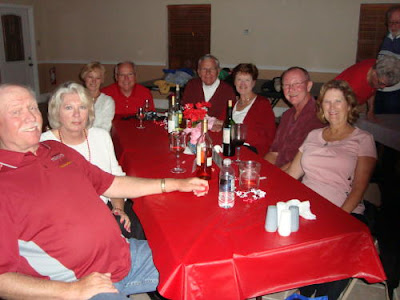 Here’s our friend Joe, who was called to the stage by DJ, Mark. Joe did not sing Karaoke (thank God), but Mark played a song for him, commemorating a successful fishing trip Joe had recently. The song was very funny about Jake, gigantic fish that was ultimately caught by Plain Joe after a tremendous battle of wills!! Congratulations, Joe, on catching the big one!! 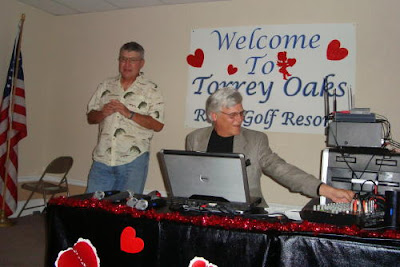 Evidence that we all had a great evening!! The Sangria is all gone!!! 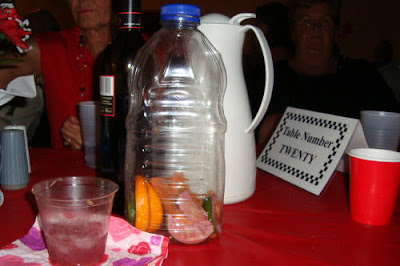 Posted by Highway Runner at 10:02 PM No comments: