Mar 15 - No Pickleball at Desert Poolstoday.  We stayed at home this morning because Roger, owner-operator of Fulltimers RV Carpet Cleaning, came over to clean our carpet. 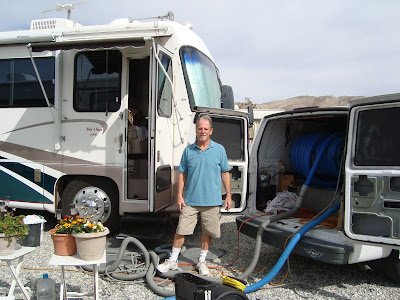 Roger cleans a lot of motorhome carpets in the Desert Hot Springs area.  He came highly recommended and did an excellent job for us!  For your information, here is his business card. 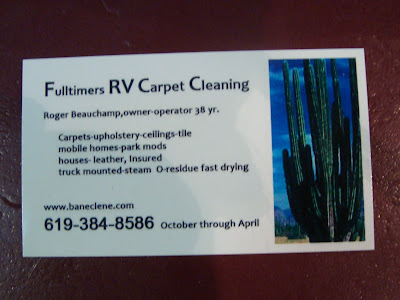 Thanks Roger for giving us nice clean carpets!

Posted by Highway Runner at 8:55 PM No comments:

CITY OF GOLDSBORO PARKS & RECREATION DOES THE HARLEM SHAKE!!

My daughter, Stasia, works with the seniors at City of Goldsboro (NC) Parks and Recreation.  I can tell you, those seniors are a little bit crazy and they have more fun!!!  Stasia leads them weekly in Exercise Class, Line Dancing, Water Aerobics, Etc.  In addition, special activities are planned such  as Grandmother/Granddaughter Tea, weekend camping, boating, hiking, plays, etc.

Recently Stasia sent me the link for a YouTube posting of her seniors doing the Harlem Shake!!  As I said:  Crazy!!   http://www.youtube.com/watch?v=F9JlG4-vkGM

Stasia, herself, is only glimpsed in the first video in the back, but later the P & R Staff did their own Harlem Shake.  That is Stasia in the pink sweater and later in the Big Bird head!  And the Dancing Polar Bear is her BOSS!!
http://www.youtube.com/watch?v=pSWpyaUjPfg

Posted by Highway Runner at 8:30 PM No comments:

Mar 4 - For you Pickleball players who played on the West Coast some years ago -- guess who we ran into at the Walmart Parking lot in Menifee, CA!!  Brian and Eileen!!  Have not seen them for years!!  Looking good -- even though Eileen said Brian has Parkinson's Disease.  They now live in Menifee/Sun City.

It was so great chatting with them.  Brian and Eileen asked to be remembered to all of their Pickleball friends.
Posted by Highway Runner at 8:00 PM No comments:

Feb 27 - As I mentioned in an earlier posting, I have an article from Inland Empire Magazine recommending the best tacos in the Inland Empire -- "The Underground Taco".. 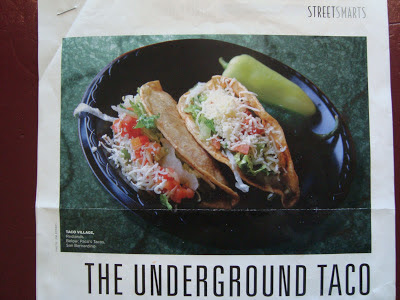 The tacos pictured in the article were from Village Tacos in Redlands.  Today I had a follow-up appointment with my Ophthalmologist in Loma Linda -- just 3 miles from Redlands!!  I talked Ken into trying the Village Tacos tacos! The manager and waitress made it a fun experience when we ordered our tacos.  I told them about the article I had read and told them they were highly recommended.  Ultimately, I said I wanted to order the tacos exactly like those shown in the picture. 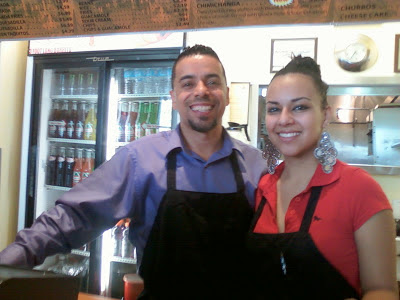 Our shredded beef tacos in crispy tortilla arrived.  We were pleased! 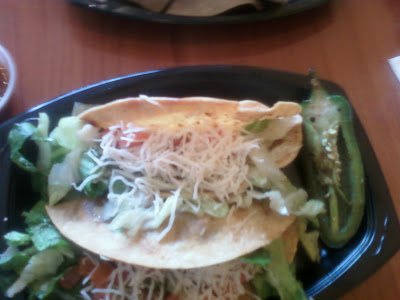 Here we are enjoying our tacos! 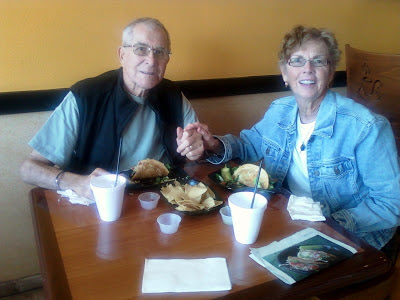 Call me crazy but we have been sampling tacos that were recommended in "The Underground Taco" whenever we happened to be in the area.  So far, Milo's Tacos in Riverside (02.27) wins!

Posted by Highway Runner at 7:30 PM No comments: