DINNER WITH MIKE AND DIANE

March 29 – It’s always good to get back home. Sunday evening, after we had set up at the Elk’s Lodge, we went to Mike and Diane’s for dinner. Ken made Margaritas and Mike prepared Fajitas. Both were delicious!! It was great to see them again!! 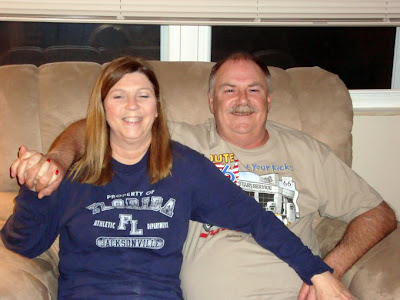 VISIT WITH BARRY AND FAMILY

March 28 – We left for Raleigh, NC on Saturday afternoon; arrived at the Elk’s Lodge in the rain. To make things worse, they had no space available for us. It’s the first time that has happened. My son, Barry, got on line and found a mobile home park that could accommodate us for the night. We drove back to the other side of Raleigh in the pouring rain, but felt fortunate we had a place to stay. After setting up, we went to Barry’s for happy hour (we really needed it!! HA HA). After which we all went out for dinner at a neat new pub. 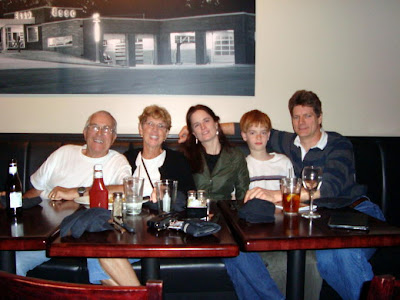 After dinner, we went to Grandson Thomas’ favorite place – The Cupcake Shop near their home, and had delicious cup cakes for dessert!! My CRAZY guys!! 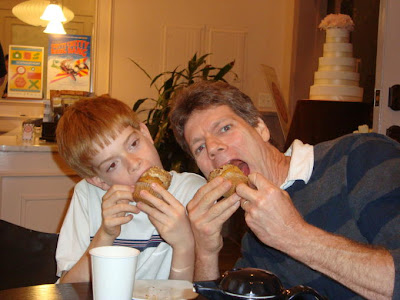 On Sunday morning, we again went to Barry’s for pancake breakfast!! UUUMMMM!! On the drive over, Ken noticed we only had one bike on the back of the car. He stopped on the highway and checked. Surely enough, his bike was no longer on the bike rack. What could we do?? We continued our drive over and there on I-40 was Ken’s mangled bike along side the road. We can only hope it did no damage to anyone else when it fell off in the rain the night before.
They are raising chickens in their backyard. Here’s the family and chick!! 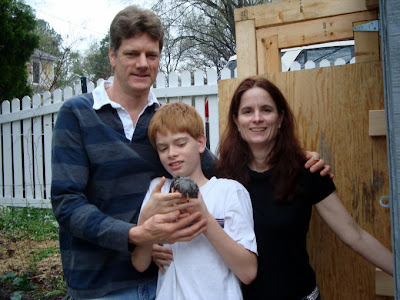 The chicks have really grown, but are not laying eggs yet!! 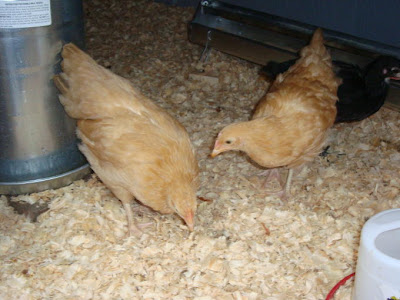 After a good but an all too short visit, we left Raleigh and headed for our hometown, Richmond, VA.
Posted by Highway Runner at 10:06 PM No comments:

VISIT TO STASIA'S AND FAMILY

March 25 – On the way to Richmond, we stopped for a few days in Goldsboro, NC to visit with my daughter, Stasia, and her family.

A friend of hers has a farm with hook-ups where we can stay. 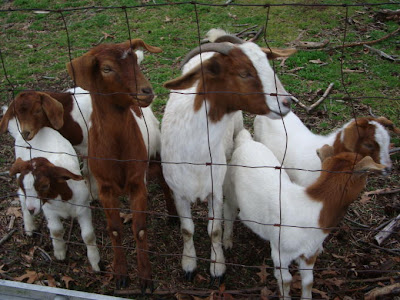 That evening we all went to Grandson Michael’s high school baseball game against last year’s champions. Michael had pitched most of the game the night before so he did not play when we were there, but the team managed to have a winning night. Since Michael did not play, he had to pose for a picture the next day. 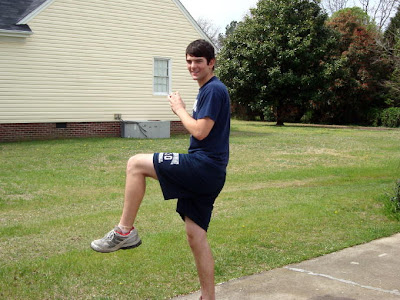 On Thursday, I went to Swimnastics with Stasia’s group of seniors. First time I had been in the pool since Labor Day last year. It was great to be back doing water aerobics.

That night the whole family enjoyed dinner at Applebee’s.

On Friday morning, Stasia taught a line dance class which I joined. Later that morning, the group went to an assisted living home and danced for their entertainment. That was fun!! Stasia is to the far right. I’m in the white shirt on the left end. 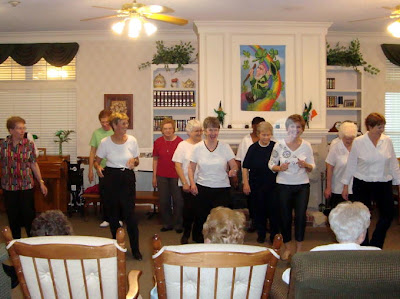 On Saturday morning, we had delicious brunch at Stasia’s, followed by some picture taking. 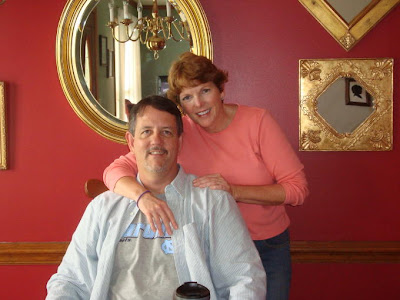 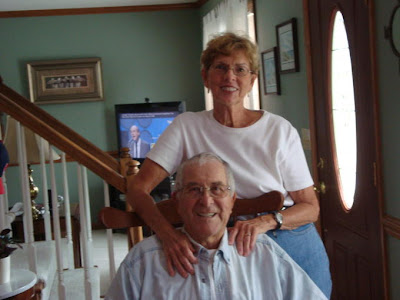 Michael was at practice, but got home in time to bid us farewell as we left for Raleigh. 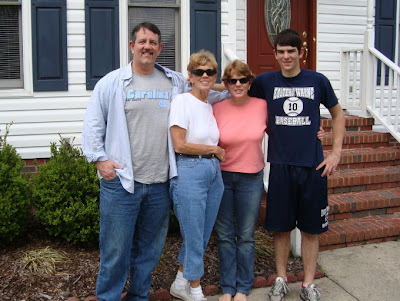 Posted by Highway Runner at 9:45 PM No comments:

March 23 – I found another Passport America campground not far off I-95 – Rocks Pond Mobile and RV Campground on Lake Marion. It's the first time we have stayed here. The campground had hundreds of sites, most of them for “residents”, but they seemed to save the prime sites for transients. Ours was situated among the Paloma trees in full bloom, overlooking the Lake – beautiful!!

Camping among the Paloma trees. 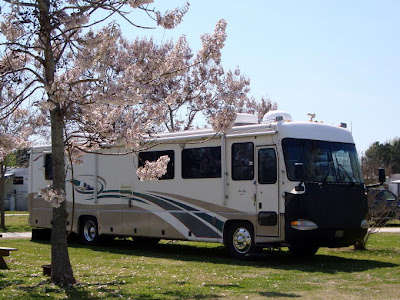 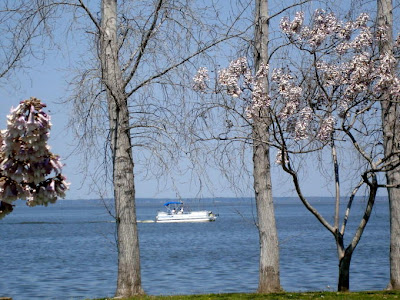 I caught a Bumble Bee in flight in this one. 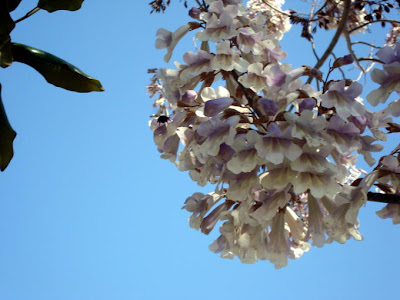 Ducks, too!! [Oh, My!! I goofed. A faithful reader wrote that these looked a lot like Canadian Honkers (geese) to her!!! What do I know?? HA HA] Thanks, Betty. 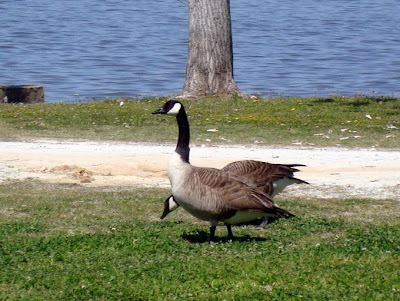 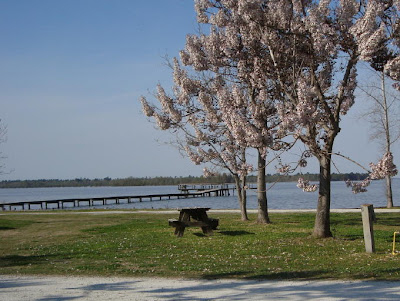 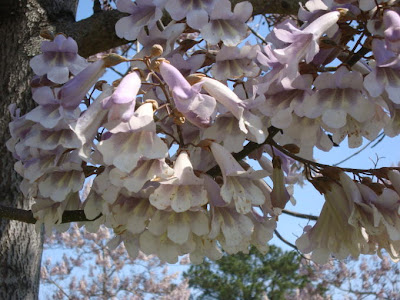 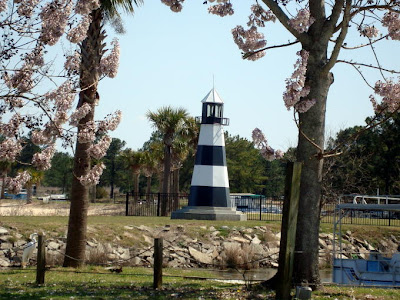 Posted by Highway Runner at 12:07 AM No comments: 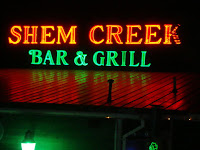 March 21 - When we left Perry, GA, our plan was to spend a few days in Savannah, but the Elk’s lodge there had space to park but no hook-ups. Since we had been without hook-ups for a week, Ken decided we had to move on. We drove to Charleston and stayed at Lake Aire, a Passport America campground. We had toured Charleston last year so did not go into town this time; however, we both were craving Oysters!

Went to Shem Creek Bar & Grill because they advertised oysters every which way!! We ordered a bucket of steamed oysters and appetizer fried oysters and beer.

We spent the evening shucking the oysters and look what we got!! Some were the tiniest oysters we had ever seen, 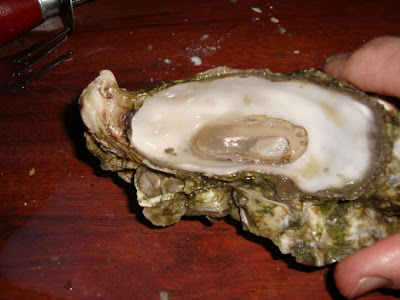 But we had a fun night and they were really, really good!!
Ken shucking. That's a plate of appertizer oysters in front of him. 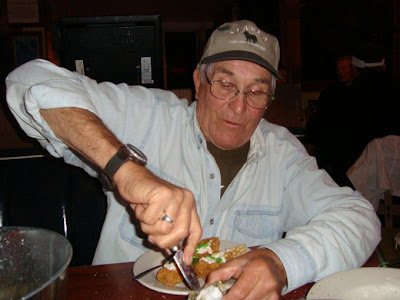 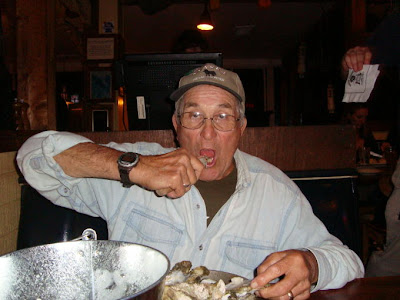 Several years ago, we gave our friends, Lois and Gene in Richmond, a purple shamrock. The green shamrock is very common – a purple shamrock is much more rare. Lois cared for the shamrock through the years until it grew to a magnificent specimen. When we were making plans to go to Florida for the winter, Ken asked Lois if she would give us three starter plants from the “mother” shamrock for his daughters in Florida. Lois rooted and nurtured three nice starter plants. We had put the pants in the stairwell of our motorhome on one of those cold Florida nights. I accidentally stepped on one of them and knocked off a few leaves. Ken took the bulb from the plant I broke and planted it in our pot of basil and took root.

It’s been almost three months since the “rooting”. For the first month and a half, the leaves were just trying to survive and develop a root system. Recently they really began to grow!! The basil is long gone, but here is the thriving purple shamrock. 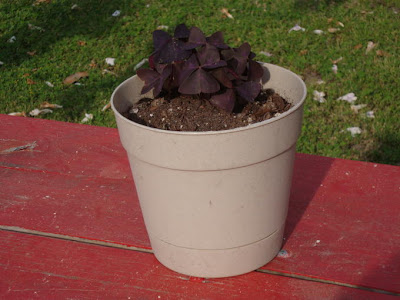 I thought it would be fun to share it with you, so we can all follow the growth of the Purple Shamrock!!!

Posted by Highway Runner at 11:46 PM No comments: