Tue, Aug 7 - Today we drove into Santa Barbara to go to the Farmer's Market again and, before that, we went early enough to visit the Museum of Natural History.  The Museum was good but I thought the best part was the Butterfly Garden.  I didn't plan to post anything about it, but we ended up with such fabulous pictures of butterflies, I just had to share them with you.  Enjoy!

Picture taken by Ken.  No cropping, no enhancements!  Amazing that the butterfly stayed still long enough to take the picture.  Good job, Ken! 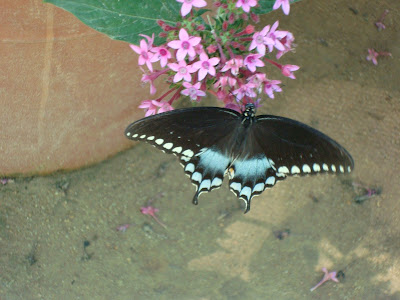 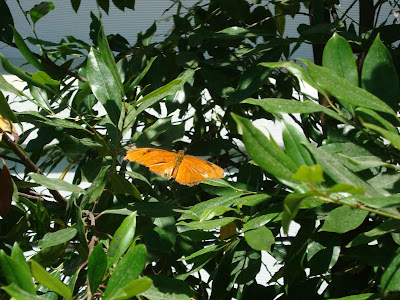 Can you find the white butterfly?  Almost camouflaged among the leaves. 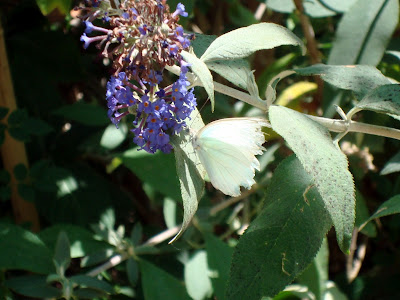 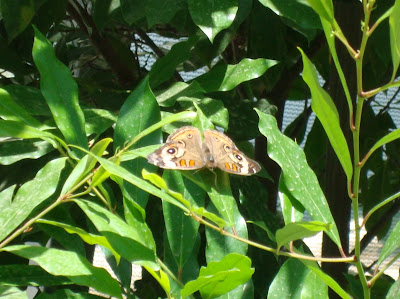 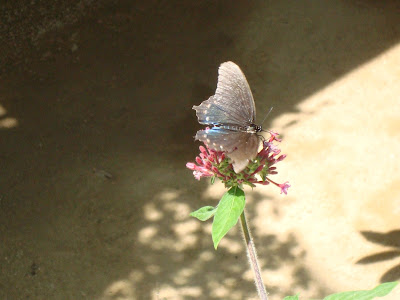 Another orange butterfly, but different from the first. 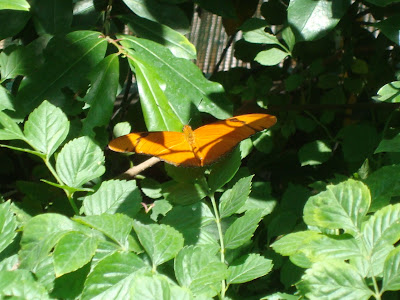 The butterflies loved this type of flower. 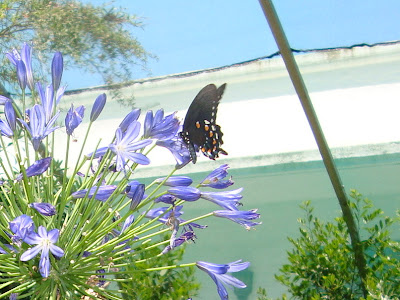 Another beautiful black and yellow butterfly.  The first black butterfly was black and blue. 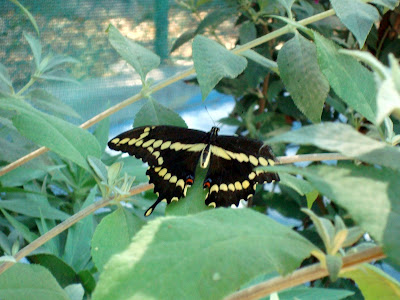 This was the most amazing picture taken by Ken.  He trained the two butterflies to stay in that position until he could snap the picture! 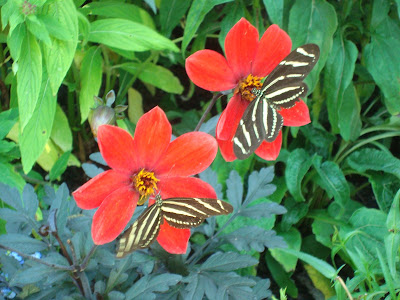 You can see why I simply had to share these pictures with you.  I know our friend Mark, who is into photography, would have loved this opportunity!!

Posted by Highway Runner at 12:04 AM No comments:

o Mon, Aug 13 - We had a wonderful day today!!  One of the things we always do when we are at TT Rancho Oso is to stop by Monty Roberts' Flag Is Up Farm, on CA 154 between Solvang and Buellton, CA.  Although Monty Roberts was not a consultant to Robert Redford in the movie "The Horse Whisper", he is well known as the Man Who Listens To Horses and one of the original Horse Whispers, because of his gentle technique of training horses.  We learned that he sold a portion of the Farm to another family; however, his wife Pat still runs the Farm. What is neat is that Visitors Are Welcome! 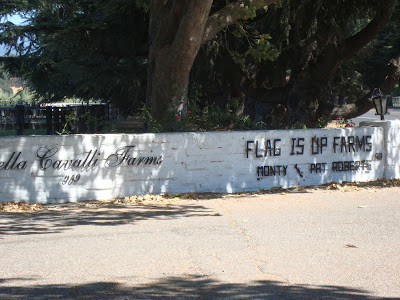 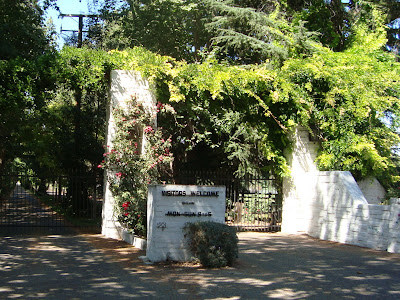 Why was our visit so wonderful today?  We were fortunate enough to be there when a few women and one gentleman were taking a horsemanship class in the School Yard!! 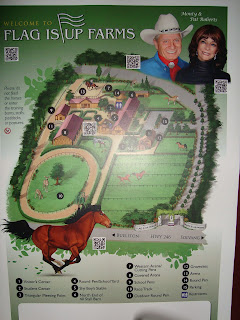 The round building in the center of the picture is the Round Pen/School Yard where some of the horsemanship classes are held.  It has an eight to ten foot wall where horses are schooled.  We went there first. 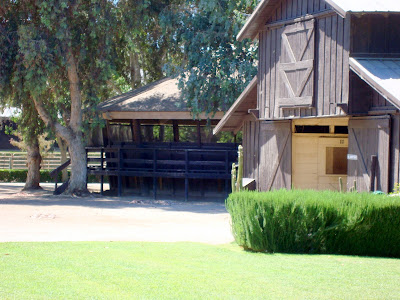 The Round Pen has a platform completely around the  the circumference on which spectators can stand.  The instructor was standing on the platform issuing instructions to another teacher who was working with a horse in the pen.  At the same time he was explaining the technique to the students and other spectators (Ken and me!!). 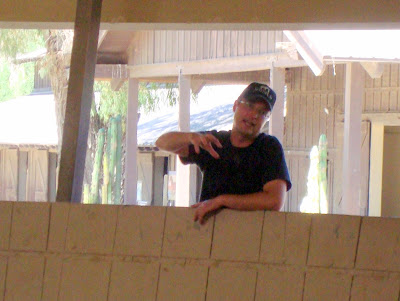 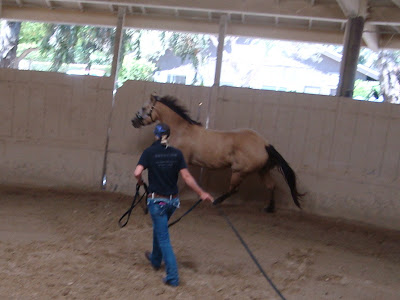 We could not see or hear any signal given to the horse, but soon he was trotting in one direction and then the other.  And then coming to a halt.  Apparently the black strap had some significance.  Sometime she dragged it behind her as above.  Sometimes it just lay on the ground.  Other times, she wound the strap and held it in her hands. 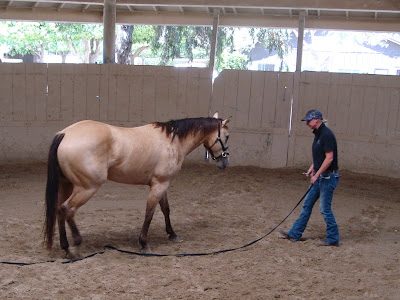 I found this interesting.  The question was asked:  How long does it take to train a wild horse straight off the range?  The teacher responded that it would take approximately eight days.

After the class was over, we followed the students to the Outdoor Round Pen.  Their task was to work as a pair to "herd" a horse between, over, and around various objects. 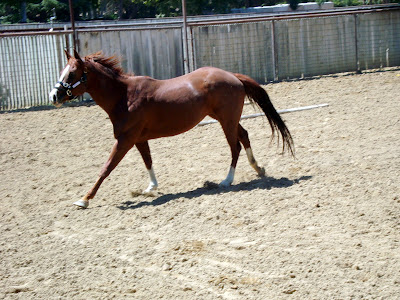 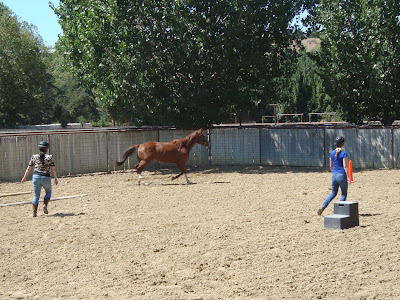 After observing a successful attempt by the students, we left to explore other areas of the Farm.  A horseman with one of the beautiful blacks stopped for a picture. 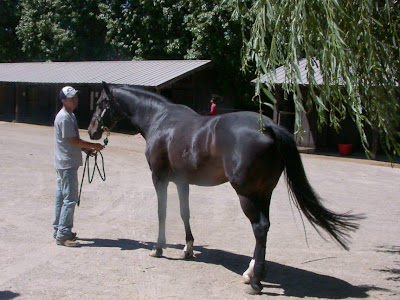 Ken made friends with one of the horses in the corral. 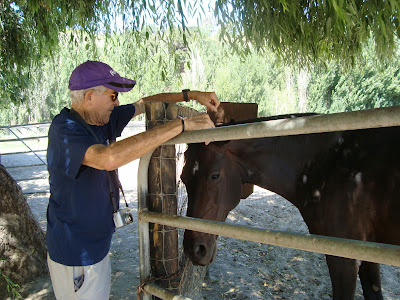 I found a family of four! 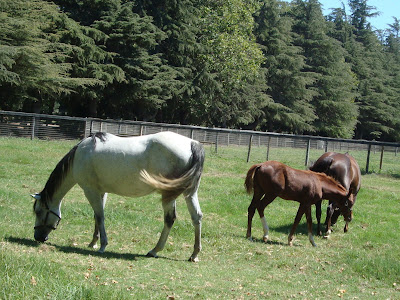 Here's the fourth, the second twin! 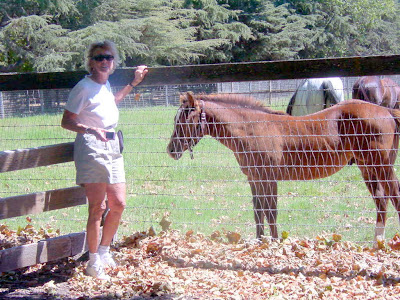 It was a perfect day at the Flag Is Up Farm!!!

Sidebar:  Nicholas Evans, the author of the novel "The Horse Whisperer" has written another book, "The Loop".  Ken and I really enjoyed it and highly recommend it for your reading pleasure!