DOGS AND BRATWURSTS WITH MIKE AND DIANE!!

July 03 – Mike and Diane had a cookout for the group on Saturday night – Dogs and Bratts. Everything was delicious and a great time was had by all!!!

Did not get a picture of the cooks at work, but here are a few candid shots!! 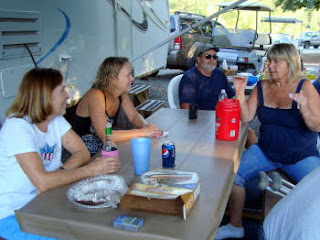 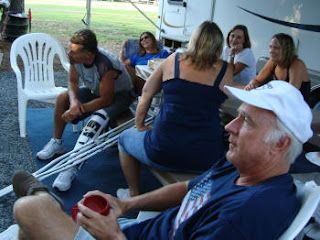 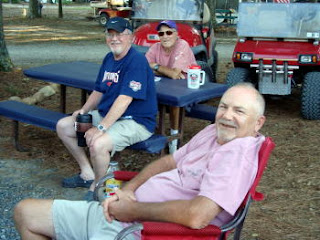 Steve at this end and Judy at the far end had their daughter and grandchild visiting. Here Baby is bonding with Grand PaPa!!! 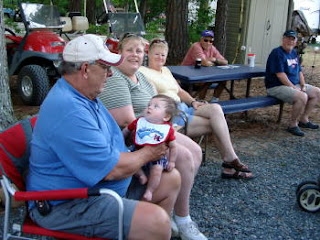 Posted by Highway Runner at 12:13 PM No comments:

Friday July 02 – We were not available for a Father’s Day Celebration with Mike and Diane on Father’s Day weekend, so when we were all together at TT Chesapeake Bay for the weekend, they invited Ken and me to go out to dinner in celebration of Father’s Day. Ken chose Goodfellows, an Italian restaurant in Glouchester. 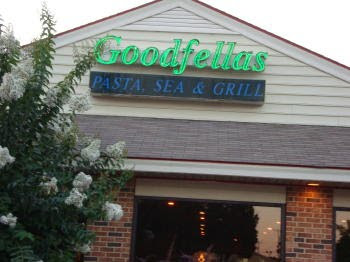 Here’s the group of us enjoying our dinner at Goodfellows!!! 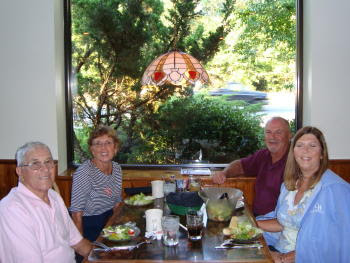 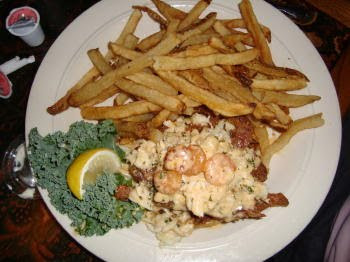 Mike had the Eggplant Parmesan which included a side of Pasta. 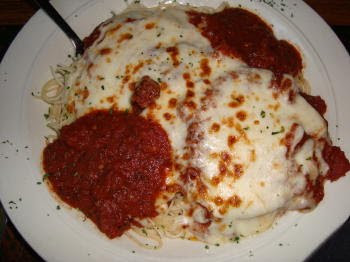 I had the Veal Marcella and Diane had Baked Spaghetti. Our selections were good, but the “presentation” did not rate a picture!!!

Thanks so much Mike and Diane. That was Wonderful!!
Posted by Highway Runner at 11:54 PM No comments:

July 2 – My friend Suzanne came into TT Chesapeake Bay on Sunday, June 27. We enjoy a lot of the same things -- line dancing, water aerobics, exercising (when I'm able), and doing computer stuff!! I was so excited to see her and spend some time with her again. 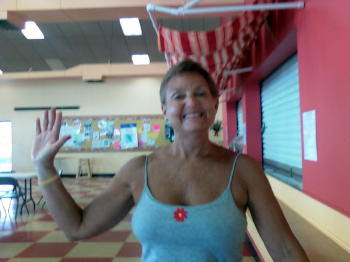 Here is the group that came for my Line Dancing class on Friday afternoon. It was so much fun seeing Suzanne again!! And she introduced me to another of her friends, Gaye (like Faye with an "e", but her's began with a "G"). That's what Gaye always said.
That's Gaye, third on the left with sunglasses; and that's Suzanne and me on the right end. 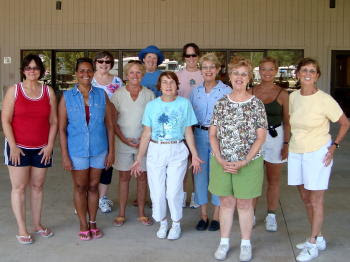 This weekend is the last I will be teaching Line Dancing at TT Chesapeake Bay because we will be leaving for TT St. Clair, MI and points west from there!!!
Posted by Highway Runner at 12:02 PM 1 comment:

June 28 – Every Monday morning, Village Lanes in Gloucester has Senior Bowling. For $5 you can bowl three games, have coffee, pastries and soft drinks, and you have a number of chance to win prizes throughout the morning!! This Monday a group of us Pickleball players went bowling. We arrived so early that we were sitting in the dinette area having coffee when another couple from Thousand Trails that we did not know stopped at our table and asked if we were from TT. We invited them to join us. That gave us eight bowlers on our lanes, and we had a ball!! (And I don’t mean Bowling Ball!!)

Here are the girls!! Faye, Dee, Sue, and Diane (the non-Pickleball player).
Don't know how Rich got in there!!! 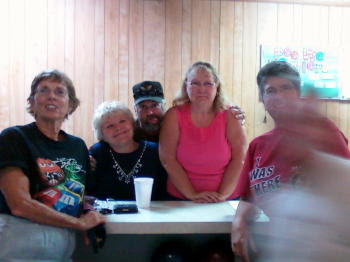 And here are the guys!! Ken, Rich, Harry, and Harvey (the non-Pickleball player). 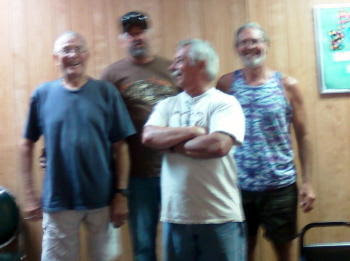 Each of us had to pose if we got a strike. (That's what Donna showed us in Wauchula, FL!!) 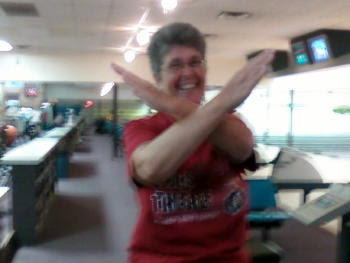 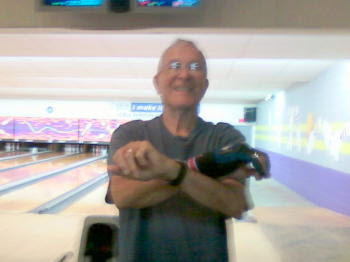 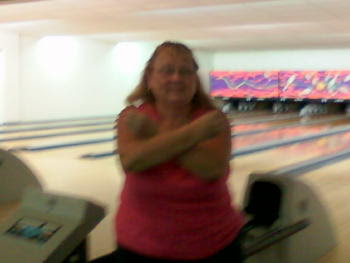 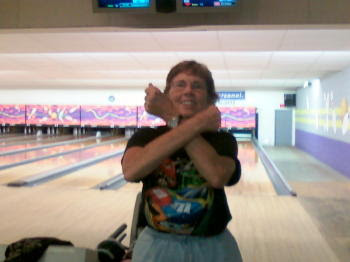 In the first game Rich challenged me and beat me by one pin!! In the second game, Rich he went looking for a stronger opponent and challenged Ken and beat him!! 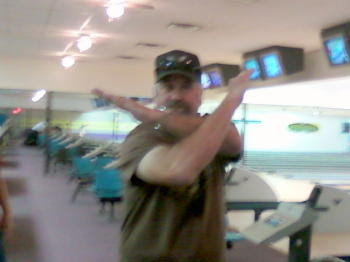 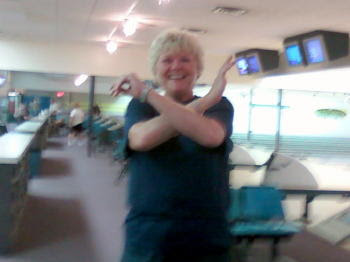 Now, Harry could not hit the broad side of a barn door until I told him if he made four strikes in a row he would win a free game!! He got not one, not two, but THREE strikes in a row. Just missed the Four Bagger by two pins!! The TURKEY!!! 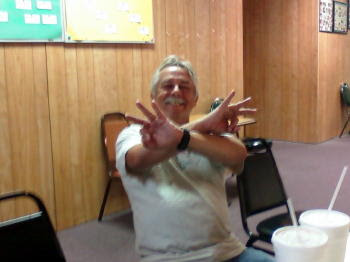 Harvey is the only one who did not strike. But then, who can bowl with a PURPLE ball!!??!! 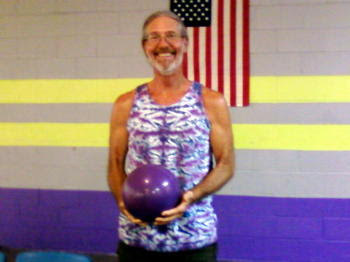 After bowling we all went to Ginny’s Place and pigged out on their home cooked buffet. 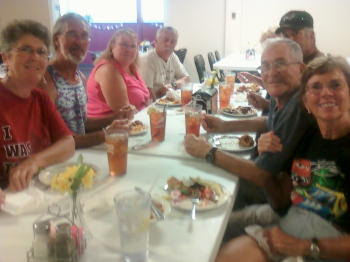 June 26 – Another cookout!! This time Pauline and Judge invited the group for smoked beef butt that Judge said he had smoked all-l-l-l day the day before!! All I know is that it was mighty good!!

Our hosts Pauline and Judge!! 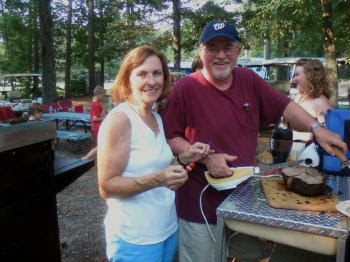 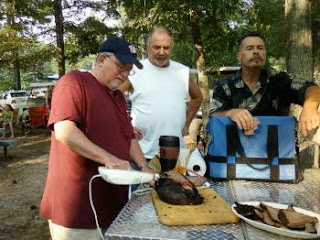 Now Jimmy, Rick and Melissa observe Judge's artistry!!
The cookout was actually held at Rick's site because they have a large space. 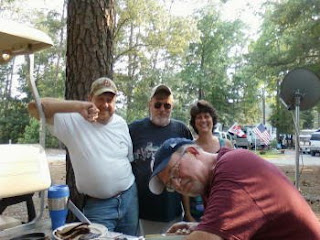 Some of the group that gathered for dinner -
Delores, Lynda, Joanne and Rick, Diane and Ken 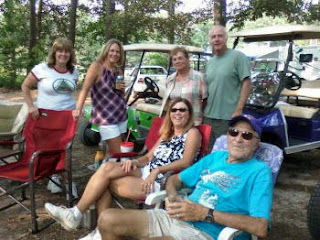 Thanks Pauline and Judge for a great time!!
Posted by Highway Runner at 8:55 PM No comments: