Sunday, Aug 31 - Today, Mike Roberts ran the 5th Annual Ken and Faye Ewbank Pickleball Tournament at Thousand Trails Chesapeake Bay Resort in Virginia.  Can you believe we have a Pickleball tournament named for us!!??  This particular tournament is not restricted to Thousand Trails members but is open to other players in the area who would like to participate.  So we had a large group of enthusiastic, fun players!

Here is the group of about 45 participants! 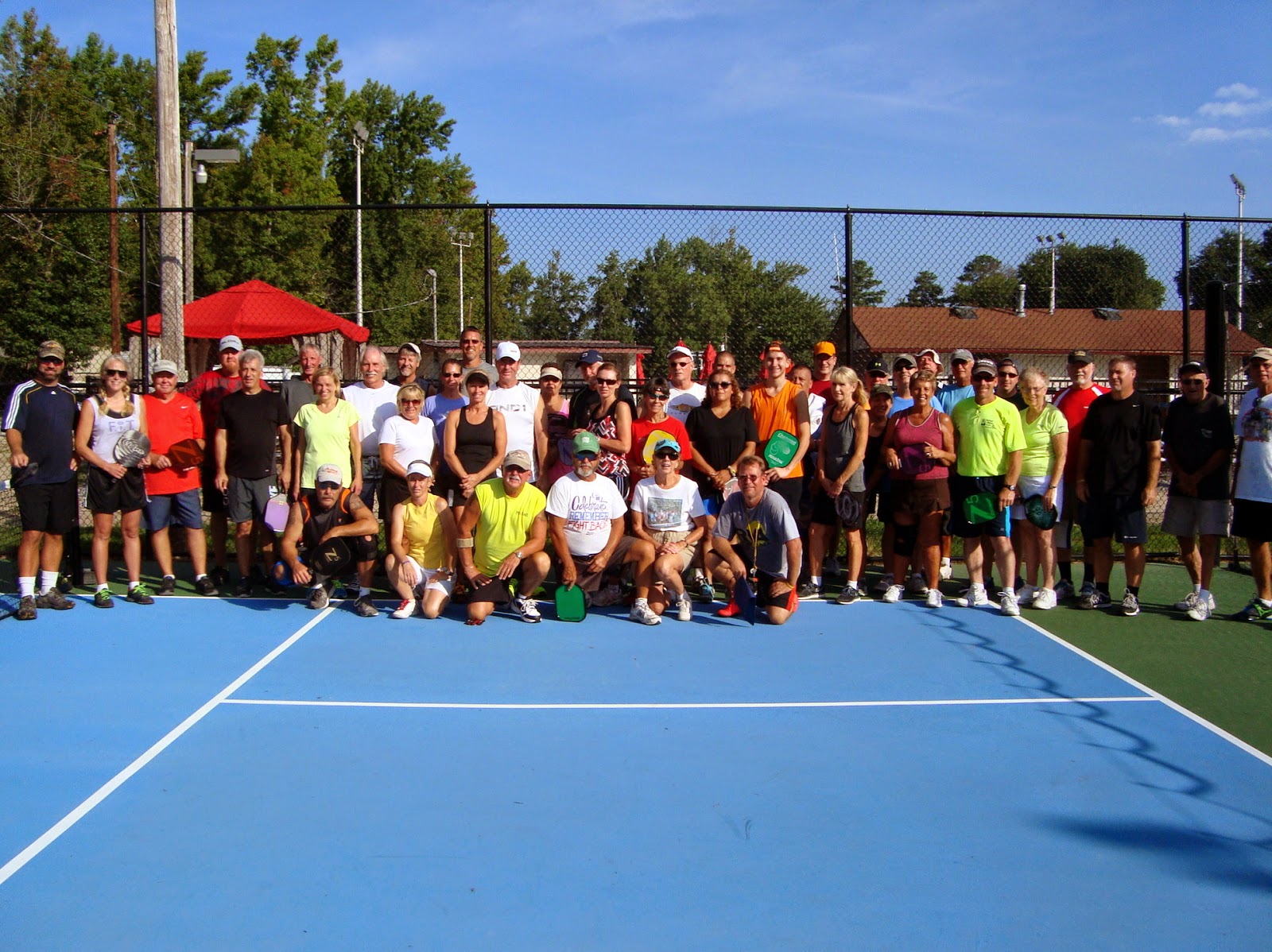 Mike welcomed the group and explained to everybody how ten years ago Ken and Faye had learned to play Pickleball out west and came back to TT Chesapeake Bay and introduced the game to anybody who would play.  After a few years the initial group had grown and a small tournament was held over Labor Day Weekend.  From that beginning, we now have four beautiful new Pickleball courts at the Chesapeake Bay Resort.

Mike surprised me by calling me to the front with him (Ken was indisposed!).  He announced to the crowd that  ". . . not only is the Labor Day Pickleball tournament named for Ken and Faye, but today we are dedicating the new courts to them."  I was overwhelmed!!  I could not believe it!! 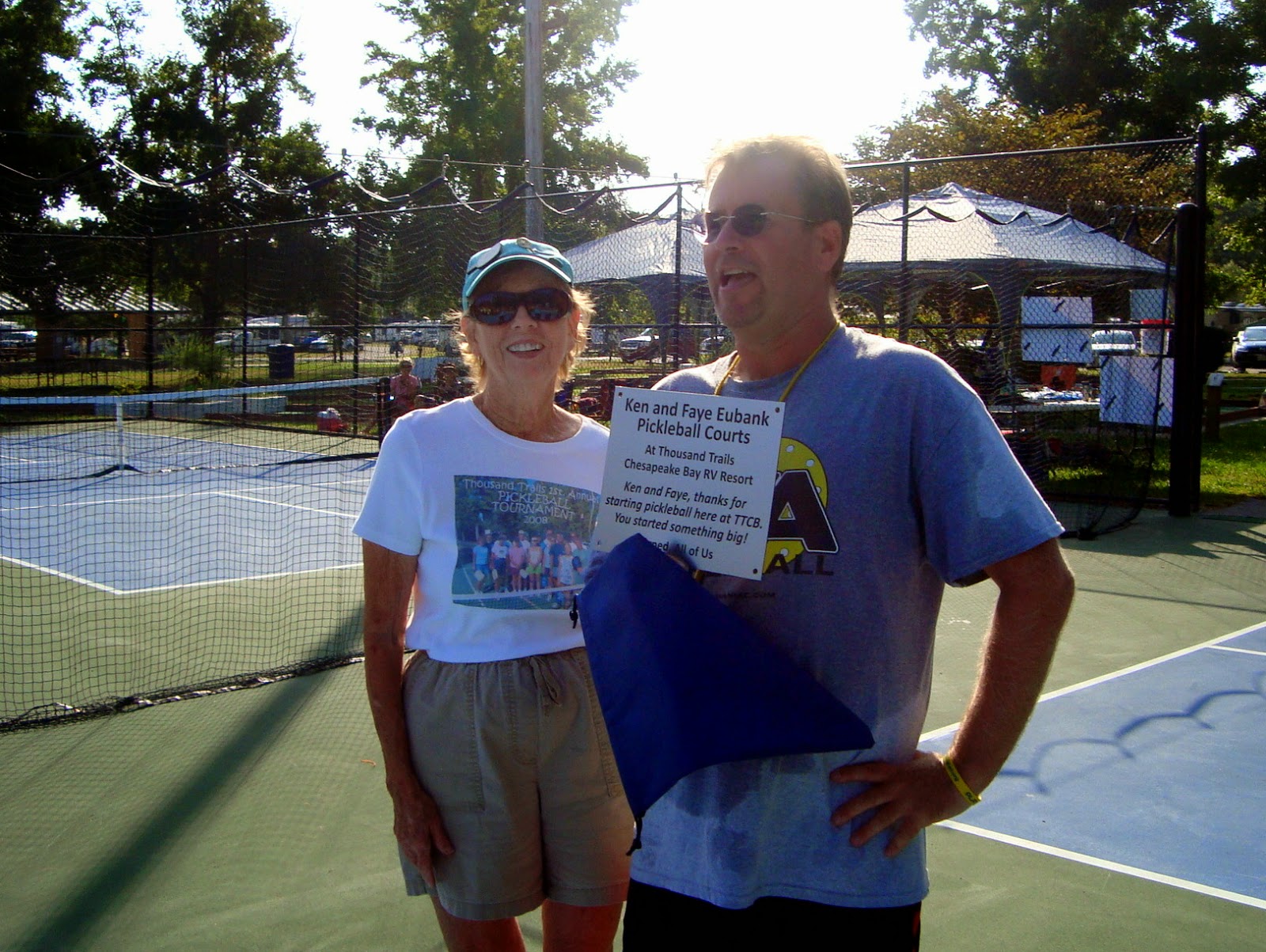 Mike showed the plaque bearing the name of the Ken and Faye Ewbank Pickleball Courts that will be posted at the main entrance gate!  Can you believe this!!??  I know I can't!!
(Mike said the lady at the print shop finally convinced him that Ewbank was not spelled with a W.  He will have the spelling of our name corrected.) 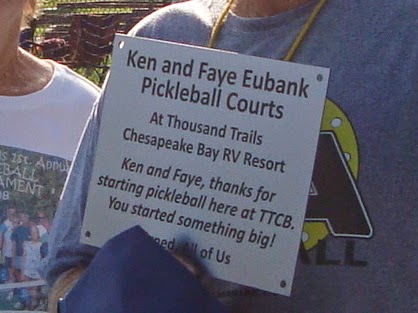 The new Pickleball courts are wonderful but it is very difficult to take action pictures because the fence is in the way.  Here are all four courts in action! 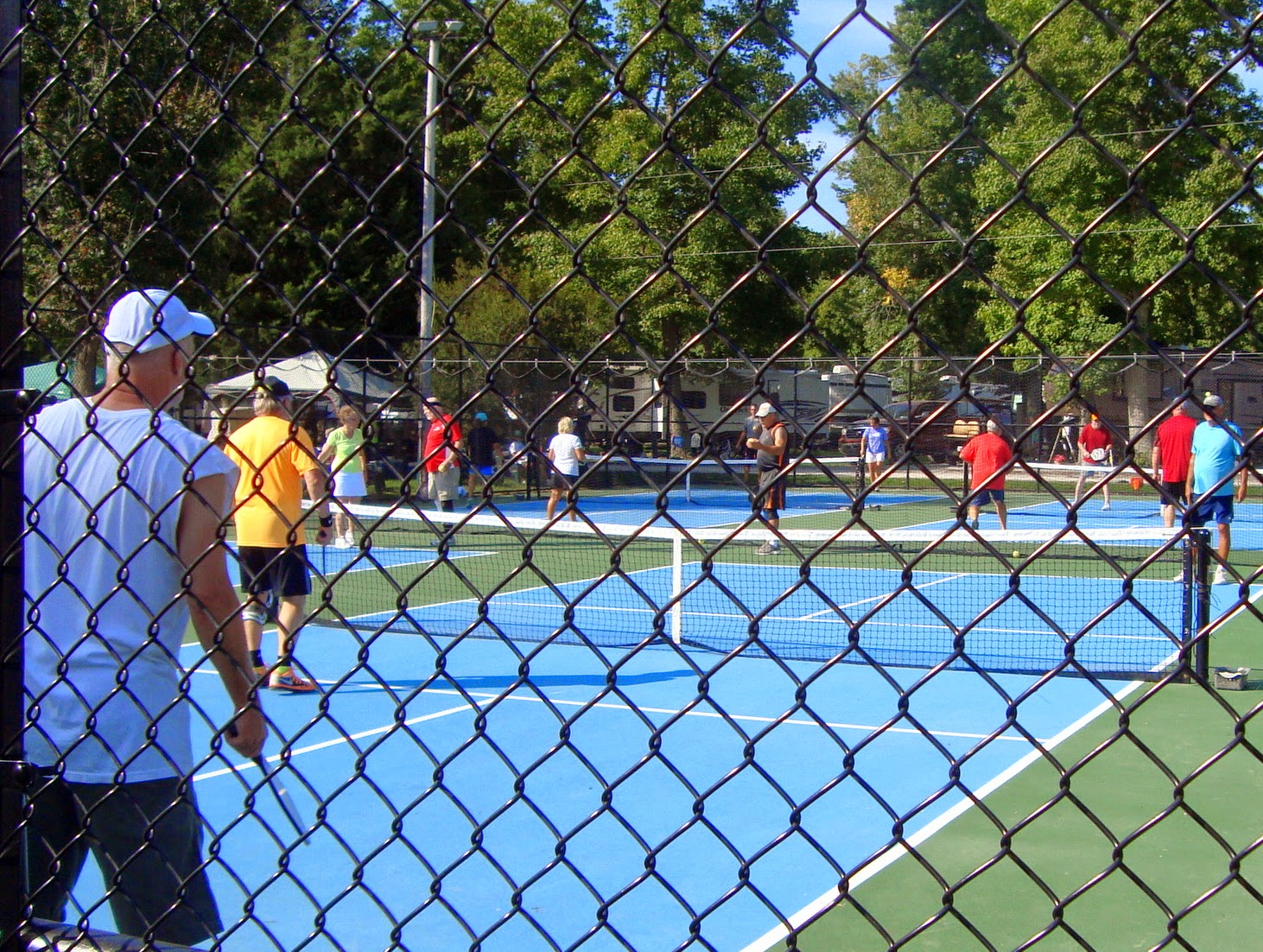 Among the participants were our long-time good friend Dennis (white shirt) and his partner Louis.  Their first match happened to be against two ladies who are frequently here at TT Chesapeake Bay, Jessica and Joyce. 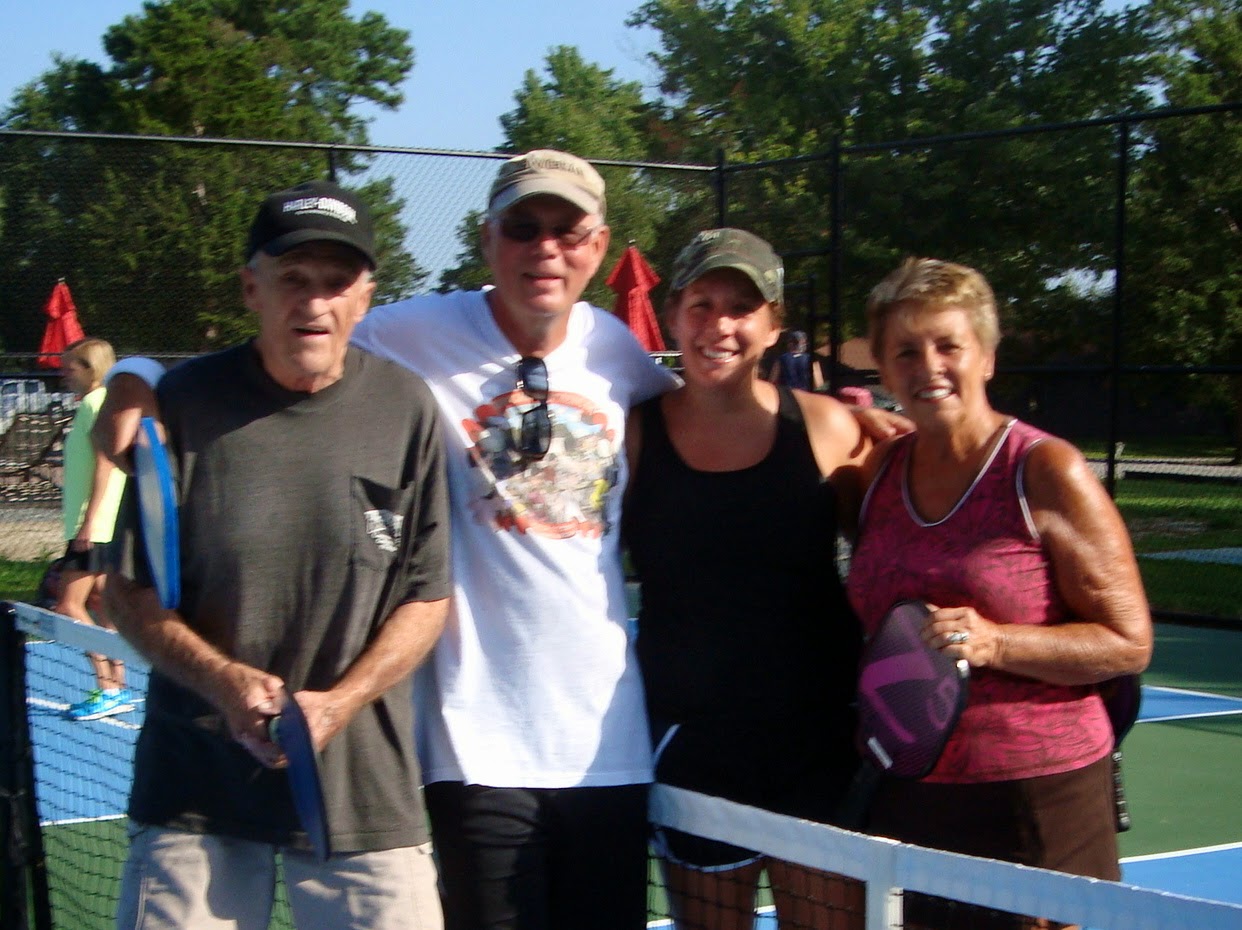 Dennis and Louis in action in a later match! 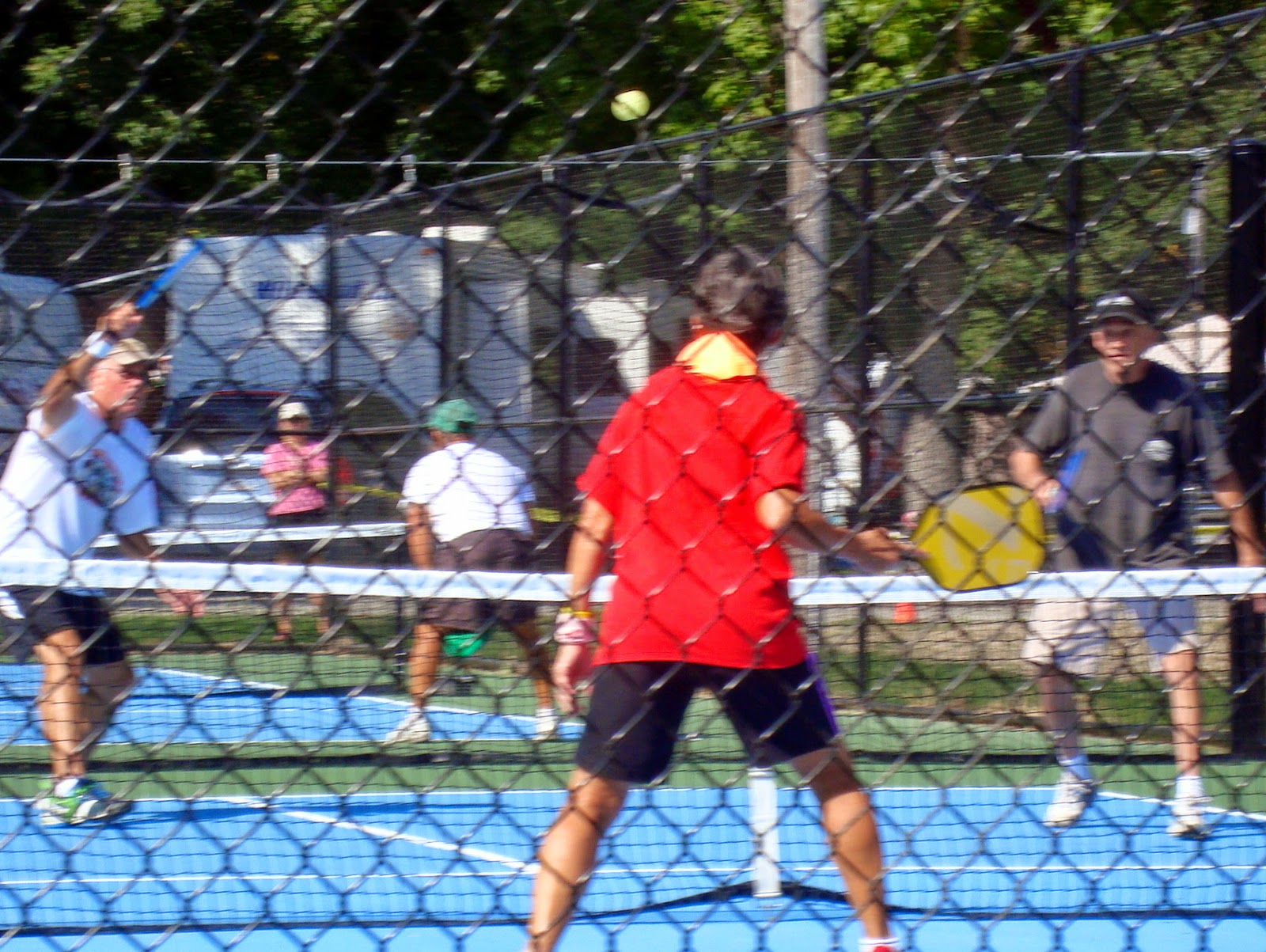 At the end of the doubles tournament lots of medals were presented to the various bracket winners and jars of Vlasic pickles went to the runners up!  After the presentations we all enjoyed hot dogs, cookies and drinks.

The Ken and Faye Ewbank Pickleball Tournament ended with a singles tournament for the crazies!!

WHAT A DAY!!  Thanks so much, Mike for handling everything!!!