January 15 - One afternoon Sally, Cis and I were sitting around having a glass of wine. Before long we were making plans. Sally suggested that each of us invite one other person to join us at The Jave Café for lunch. Cis and I immediately applauded the idea the decided whom we wanted to invite.

Sally invited her new friend Bev who is spending this season next door to Sally. Bev is so energetic and attends all of Sally’s exercise classes. Cis invited Marilyn whom she met last year. Marilyn is renting the site across the road from Cis which is the site next to ours. I invited my new friend Sally (we call her The Other Sally). I met her on the Pickleball Court and at the morning exercise classes, etc. She is such fun and so easy to get to know. 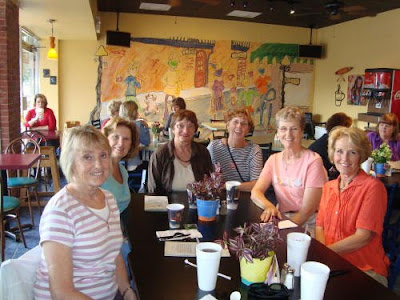 Here we are ready to enjoy a delicious luncheon at The Java Café. Around the table, Left to Right. Bev, The Other Sally, Sally, ME, Marilyn and Cis.

We all had a really great time and plan to do it again in February.
Posted by Highway Runner at 8:54 PM No comments:

About a mile from Torrey Oaks is a U-pick farm of hydropnically grown strawberries and vegetables. Ken and I set out one day to pick strawberries. It was really neat because all the plants were on stakes, and not only that, but the were in suspended pots and you could stand in one place and turn the plants to get to the berries on the every side.

Berries were beautiful and plentiful! The owner was very helpful. He gave us buckets for picking and small scissors for snipping the berries rather than pulling them from the vine. And he showed us which berries to pick and which ones needed to ripen more (like we didn’t know). 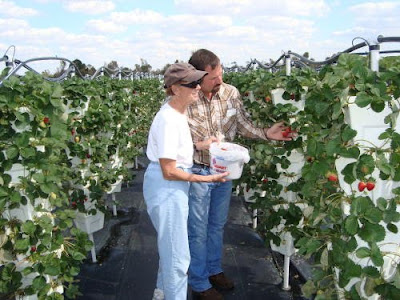 The owner’s father was there and helped us pick. In fact, he picked so many strawberries that Ken got upset because the old gentleman kept piling berries into our bucket. Ken complained because he didn’t get to pick any himself, AND he didn’t want THAT many berries in the first place -- $11.88 in berries!! That’s $11.88 of yummy strawberry shortcakes!!! UMMMMMMM!! 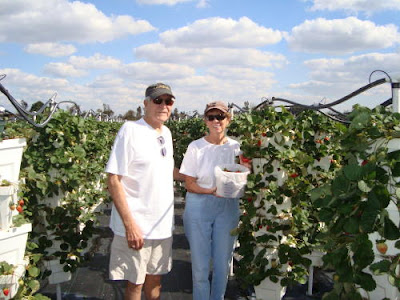 Posted by Highway Runner at 6:52 PM No comments: