Back in April, Ken had defibrillator surgery.  He had done well following the surgery, but it has not made him a new man as we had hoped!!  He became concerned about being out west with our motor home, 2500 miles from home, Richmond, VA!  I guess you could say, we became practical!!

We are currently at TT Verde Valley, Cottonwood, AZ.  We have a number of doctor follow-up appointments.  We have decided that when we are finished with the doctors here, we will head back East, about the end of July.  We plan to take a leisurely trip East on I-40.  Guess we'll get back home sometime in August!!

Just wanted you all to know!!
Posted by Highway Runner at 9:14 PM 2 comments:

Mon, Jul 01 - Is it July already??!!  It must be.  It's hot enough.  In fact, here at TT Verde Valley, Cottonwood, AZ, it is so hot, we are just hibernating inside!!  That's where we were, watching tennis at Wimbledon, when we received a phone call from Harold and Marion.  They were on a mission to deliver a pick-up truck to someone in Alaska!!  They would be stopping at McDonalds in Camp Verde (10 miles away) in 20 minutes.  Could we meet them for an ice cream cone??  Of course, we said "Yes"!!

Here we are, enjoying our soft-serve cones!  Their's were naked.  Our's  dipped.  UUMMMM! 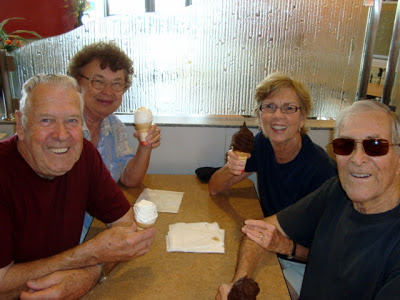 When we ordered, we had teased the waitress because their naked cones were $1.  We said we'd have to go next door to Burger King next time.  Their cones were only 50 cents!!!  HA HA

We said fairwell to Harold and Marion and sent them on their way to Alaska!!

Thanks guys for thinking to call us to meet you!!  Great send-off!!!!

Excerpt from an Article in the Arizona Daily Sun 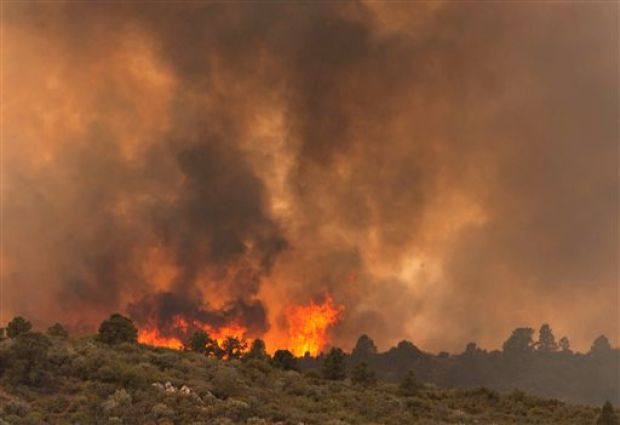 Gusty, hot winds blew an Arizona blaze out of control Sunday in a forest northwest of Phoenix, overtaking and killing 19 members of an elite fire crew in the deadliest wildfire involving firefighters in the U.S. for at least 30 years.
The "hotshot" firefighters were forced to deploy their emergency fire shelters — tent-like structures meant to shield firefighters from flames and heat — when they were caught near the central Arizona town of Yarnell, state forestry spokesman Art Morrison told The Associated Press.
The fire also destroyed an estimated 200 homes, Morrison said. Dry grass near the communities of Yarnell and Glen Isla fed the fast-moving blaze, which was whipped up by wind and raced through the homes, he said.
The fire still burned late Sunday, with flames lighting up the night sky in the forest above Yarnell, a town of about 700 residents about 85 miles northwest of Phoenix [and about 82 miles southwest of TT Verde Valley, our campground]. Most people had evacuated from the town, and no injuries or other deaths were reported.
The fire started after a lightning strike on Friday and spread to at least 2,000 acres on Sunday amid triple-digit temperatures, low humidity and windy conditions.
Prescott Fire Chief Dan Fraijo said that the 19 dead firefighters were a part of the city's fire department.
"We grieve for the family. We grieve for the department. We grieve for the city," he said at a news conference Sunday evening. "We're devastated. We just lost 19 of the finest people you'll ever meet."
Hot shot crews are elite firefighters who often hike for miles into the wilderness with chain saws and backpacks filled with heavy gear to build lines of protection between people and fires. They remove brush, trees and anything that might burn in the direction of homes and cities.
The crew killed in the blaze had worked other wildfires in recent weeks in New Mexico and Arizona, Fraijo said.

"By the time they got there, it was moving very quickly," he told the AP of Sunday's fire.
He added that the firefighters had to deploy the emergency shelters when "something drastic" occurred.
"One of the last fail safe methods that a firefighter can do under those conditions is literally to dig as much as they can down and cover themselves with a protective — kinda looks like a foil type — fire-resistant material — with the desire, the hope at least, is that the fire will burn over the top of them and they can survive it," Fraijo said.
"Under certain conditions there's usually only sometimes a 50 percent chance that they survive," he said. "It's an extreme measure that's taken under the absolute worst conditions."
The National Fire Protection Association had previously listed the deadliest wildland fire involving firefighters as the 1994 Storm King Fire near Glenwood Springs, Colo., which killed 14 firefighters who were overtaken by a sudden explosion of flames.
[Sidebar:  I talked with a friend of ours who lives in Prescott this morning.  She said all of the "hotshot" firefighters who were killed were from Prescott.  They were the best of the best.  It is really sad.  Prescott is where we met Becky and Richard for lunch on Saturday, the day before the tragedy.]

LUNCH AT MURPHY'S IN PRESCOTT, AZ

BECKY AND RICHARD AT MURPHY'S IN PRESCOTT

Sat, Jun 29 - We are currently at TT Verde Valley in Cottonwood, AZ.  Becky and Richard are staying in Williams, AZ.  We are nowhere near each other, but, they called us the other day to see if we could meet them at Murphy's in Prescott for lunch on Saturday.  Of course, we said "yes"!!

We had never eaten at Murphy's.  They had.  Becky and Richard arrived before we did.  There happened to be an 80th Birthday party going on near where they were first seated.  Too much noise!!  Becky asked Andy, the manager, if we could be seated away from the party.  (In the process she happened to mention that her friends (Ken and me) had never been to Murphy's before.)  We were seated in a very private booth near the window! 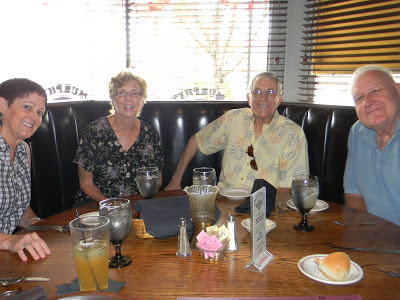 Lunch was a lot of fun and delicious!!  Don't know how I forgot to get a picture of our wonderful Reuben Sandwich plates!!  When we were nearly finished eating, Andy came over to welcome us to Murphy's, and confirmed that we were new customers.  Then he offered complimentary desserts for the table!!  Ken chose the Carrot Cake.  Richard and I had the Bread Pudding (their signature dessert).  UUUMMMM 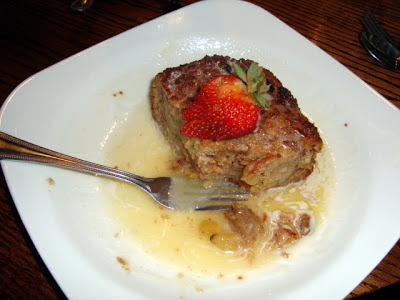 As we were leaving, we stopped to thank Andy for a wonderful lunch and especially for the dessert!!  We asked him to take a picture with us! 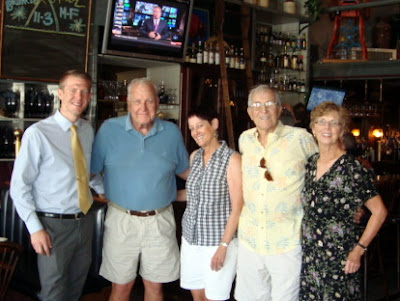 Thank you so much Becky and Richard for introducing us to Murphy's in Prescott!!

Posted by Highway Runner at 9:11 PM No comments: