KEN WAS IN THE HOSPITAL BUT HE'S OUT NOW!!

Sat, Feb 05 - Yes.  That's right.  Ken spent a few days in South Lake Hospital, Clermont, FL!  We took him to the Emergency Room on Thursday afternoon because he was easily exhausted with the least bit of exertion .  He had been feeling like he could not catch his breath with a lot of coughing to get the phlegm out of his chest.  We decided it was time for him to get checked out.

Almost as soon as he checked into the Emergency Room they had him on oxygen.  They gave him a couple of breathing treatments and ran a number of tests.  After further treatment in the ER, they decided to admit him to the hospital for observation and further tests.

After a couple of days of tests, the doctors' diagnosis was COPD -- chronic bronchitis and emphysema, etc.  And his blood pressure was unusually high!

After treatment of steroids and antibiotics, etc. Ken felt (and looked) a lot better.  He was released on Saturday afternoon with some new prescriptions and told to follow up with a local Primary Care Physician.

Now back home and feeling a lot better!!
Posted by Highway Runner at 10:03 PM 3 comments:

Tue, Feb 03 - Sally and Cis have been telling me about a new cocktail they have enjoyed at some of the Torrey Oaks happy hours -- Summer Beer!!  Have you had it??!!

I decided to serve Summer Beer at our Venison cookout on Tuesday afternoon.  First time I have ever tasted it.  Let me tell you, Summer Beer is sooooo refreshing!! 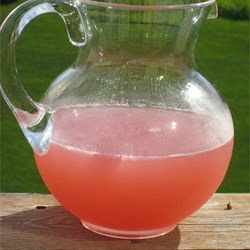 Here is the recipe for your next party!!

Pour ingredients into a jug or pitcher.  Serve over ice.

Enjoy!!
Posted by Highway Runner at 10:03 PM No comments: