Friday, Oct. 7 - Ken's Grandson Russell attends Hilltop High School in Chula Vista, CA. And, he plays defense on the Varsity Football Team!! We wanted to watch him play; so we drove down on Friday afternoon to go to the game!!
Russell was great!! He played the entire game -- every time the defense was on the field!! His number 67 and name were announced a number of times as being the defensive player involved in the tackle!! We were so proud!!
On one particular play, on Fourth Down for the opposing team, as the punter kicked the ball, Number 67 was there and blocked the kick; then Russell charged down the field and fell on the loose ball, less than 10 yards from the Lancer's goal line!! Yeah Russell!! What a play!!
Here Russell receiving instructions from his Godfather!! 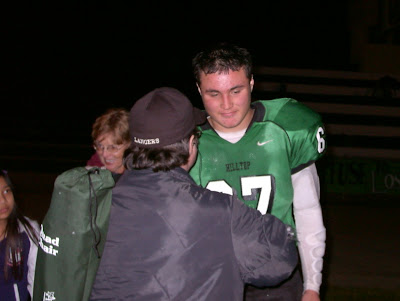 A family picture with the hero!! Jacob, Emily, Faye, Russell, Rich, and Ken. 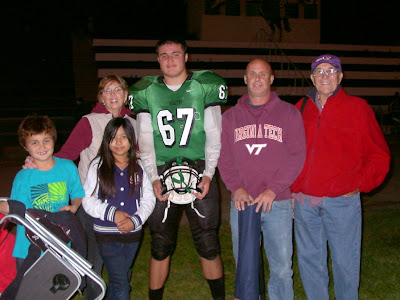 Congratulations Russell on a great game!! That was a lot of fun!!!
Posted by Highway Runner at 6:07 PM