I regret that it has been so long since I have added to our Blog.  A lot has happened.  I took a two-month trip to North Carolina and Richmond, Virginia.  I left Florida on October 3 and returned on Saturday, December 1.

The primary purpose of my trip to Richmond was to have a memorial service for Ken on our anniversary, October 11.  As I wrote earlier, Ken died in Leesburg, FL on June 28, 2018.  Just before his death, we had prearranged cremations for each of us. You know, you hear the advertisements all the time.  Well, although it was expensive, it certainly relieved me of a lot of responsibility in my time of sorrow.

Years and years ago Ken and I had purchased a niche for two at the Greenwood Memorial Gardens in Richmond.  When Ken passed away, his family and I decided to have his ashes interred at the place he had selected himself, rather than at a National Cemetery.  I knew nothing about planning a memorial service, but apparently Ken’s family had some experience and they were a great help in planning the service as well as a very nice reception afterwards at a local restaurant.

The family and I engaged the current pastor at the church that Ken attended when he was a child to officiate.  Pastor Mark Roots did not know Ken, but Ken’s brother still attends that church.  Pastor Roots did a remarkable job with smooth interaction with the other participants.  In fact, he had printed a program of the service which included coral readings by the attendees.  I thought that was a very nice touch and made everyone an active part of the service.

Ken’s oldest son, Mike and his family, arranged to have a hand-out prepared with a wonderful picture of Ken and a recount of his life.  It was most impressive!  Here is the picture.  UUMMMM So handsome. 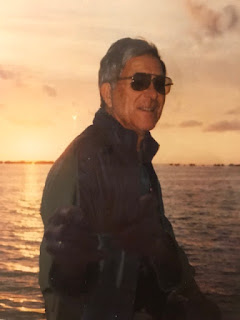 Thirty-nine years ago, when Ken and I were married, he was the Grounds Manager at Union Theological Seminary in Richmond.  Ken was friends with a young pastor there by the name of Bill Arnold.  He asked Bill if he would perform the wedding ceremony for us in the little chapel at the Seminary.  Bill agreed and the wedding took place on October 11, 1979, thirty-nine years ago.

When thinking about having a memorial, I had the wild idea to try to track Bill Arnold down, and possibly, he might be able to be a part of the service.  I was able to get in touch with Bill through the internet, but unfortunately, he was not able to be there.  However, he did write a special prayer for Ken.  That prayer means a great deal to me and was an important of the service.   I print it here so you might get an insight into the relationship between Ken and this young pastor. 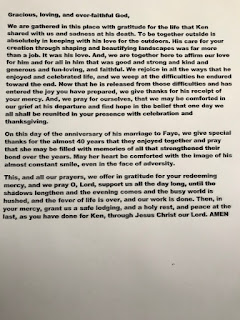 But the most impressive part of the service was the presentation of the American Flag by an Honor Guard in recognition of Ken’s service in the Army.  There were two representatives.  Near the end of the service, one played a haunting rendition of TAPS while standing at the end of a hallway in the mausoleum, silhouetted against an overcast sky.  It was breathtaking.  Then with great precision, they unfolded the flag, refolded it and presented it to me, the Widow.  I felt that Ken’s older son should be the one to have the flag, so I asked that it be given to him instead.  To my surprise, after the service was over, they brought another American Flag and gave it to me!

I regret that I have no pictures of the occasion because it was so impressive, but this is where it took place.  Greenwood Memorial Gardens, Richmond, VA. 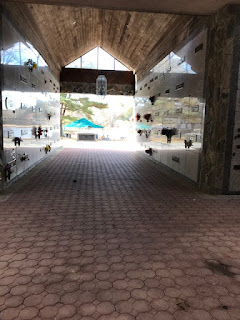 The hall in the mausoleum where the trumpeter stood.  There was no green tent and the sky was gray.  A table with Ken's picture, a folded American flag, and Ken's ashes was at the lower section of the picture.  The family was seated just outside the picture, behind the table, looking down the hallway. 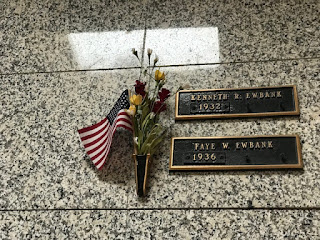 The nitche where Ken's ashes were inturred.

I want to take this opportunity again to Thank You All so very much for your kind comments on the Blog, and your cards, and telephone calls after learning of Ken's death.  You certainly were of great comfort to me.