A BIG PAIN IN THE BUTT!!

Thursday, December 18 – Going Back - I have been having a pain in my right hip since October. Recently my hip has been bothering me even more and both Ken and I have pretty much given up all physical activity. Yesterday afternoon while shopping, I felt a “catch” in my hip and after that I could hardly hobble back to the car. Today we moved from TT Orlando to TT Peace River, about 60 miles. We’ll be here until February 1 (renting the month of January). My hip hurt me so badly I decided to drive myself to the Emergency Room in Wauchula at about 12:30 while Ken got things set up at the camp site. 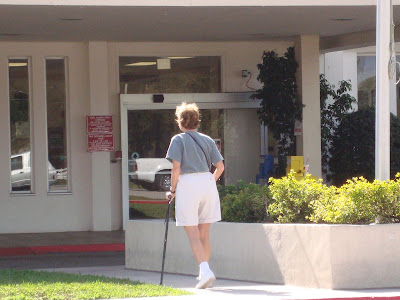 I was attended to immediately and taken to a curtained off gurney, covered with a warm blanket and waited for the doctor. He came in and reviewed my symptoms. I was amused that he seemed more impressed with Ken’s cane that I was using. “Who’s been treating you?”he asked. “No one – this is my first treatment.” “Where did you get that cane?” he asked. I told him I had taken it from my husband who had recently had hip replacement surgery. “Well, that’s a really nice cane! That’s a good idea!” Then he ordered two shots for me, one in each hip; one for muscle relaxer and one for pain.

Eventually, the nurse came with the prescriptions and discharge instructions. She said she was in to see me earlier, but I was sleeping!! With Rx’s in hand, I finally left the ER at about 4:00 PM, went to Wal-Mart to fill the prescriptions and pick up a few items.
Leaving ER w/X-Rays and Rx's 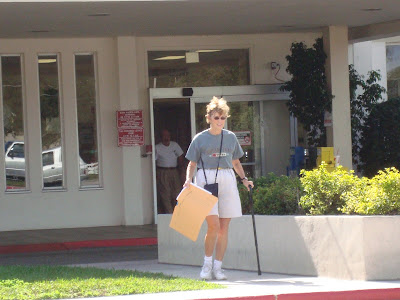 Have you ever been in Wal-Mart and heard the booming voice of God from above -- “Faye Ewbank. Please come to the front of the store. Your party is waiting.” Scared me to death!! 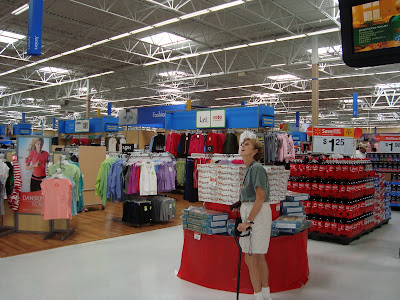 Ken was worried about me and had gotten our friend, Stan, to drive him to the ER. They learned I had left, so they surmised that I must be at Wal-Mart. Good thinking. Ken and I picked up my filled prescriptions while Stan picked up Pizzas for dinner. Good thinking, Guys!

This is a great story, Faye, not that you have a sore hip, but you told it well (I had to laugh every now and then). And I loved the pictures!