We continued our trip on Sunday morning. We were driving along, making good time on Florida I-75 South. I had just driven my 100 miles (HA HA) and we were changing drivers when we noticed the inverter lights were RED. Something was wrong. Ken turned on the generator and began driving. It was not long before he noticed the Voltage Meter was far to the left; the batteries were not charging. We did not want to run out of power on I-75 so we contacted Cummins Service 800 number. It turned out there was a Cummins Service Center in Ocala, the next exit. So we have an unscheduled pit stop at - 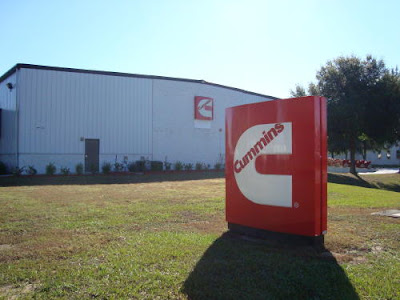 Really lucky to be so unlucky!! Thank God for Verizon and GPS!!

On Monday, the technician diagnosed the problem to be the Alternator. Don’t know when we’ll get out of here but at least they are working on it and we have 50 AMP hookup!!

Unlucky again!! Our model Alternator has been discontinued. They are looking into having ours rebuilt!! $$$$$$$$ We may be lucky again. We took our old Alternator to the rebuilder. He thinks he has a couple that will work in our motor home so he will not have to rebuild ours. Fingers are crossed.

We’ll get to Orlando when we get there!!!
Posted by Highway Runner at 8:53 PM

Sound like a safe place to stay for the repair. And 50amp!

At least you caught the problem early enough and avoided a break down on I-75. Have fun in Orlando.