Friends Philip and Catherine provided the following website for more insight about the Mission Bells we saw along California Hwy 101:

In 1769 The El Camino Real (Kings Highway) was just a footpath. As California Missions were established from San Diego to Sonoma, the footpath became a roadway. In 1823 the little pathway became a real route.

The first Mission Bell was designed by Mrs. A.S.C. Forbes in 1906. On August 15, 1906 that first El Camino Real Bell was installed at the Pueblo De Los Angeles Mission Church in Los Angeles. It still stands today! 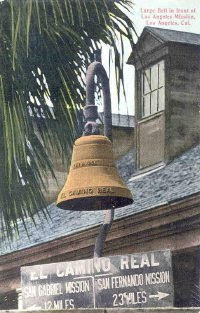 The picturesque Mission Bells that we saw along Hwy 101 as we drove south from Morgan Hill to Los Angeles were installed as guideposts which gave distances between the principal towns and directions to the Missions. The Bells were inscribed “El Camino Real 1769-1906”. The dates reflect the founding of the first Mission and the dedication of the first Mission Bell in Los Angeles. By 1913, 450 bells were in place; however, since that time many bells were lost to road reconstruction and theft. Through the efforts of California Bell Company, a total of 555 original El Camino Real Bells are now in place along Hwy 101.

In fact, you can have your own Bell!! Go to the California Bell website http://www.californiabell.com/for the entire interesting story.


[Note: Above information is from the California Bell websites.]
Posted by Highway Runner at 9:00 PM