REACQUAINTED WITH LYNNE AND STEVE!

Fri., Nov. 08 - We moved from TT Peace River to TT Orlando yesterday (Thursday) afternoon.  And, first thing Friday morning we went to see who was playing at the Pickleball courts.  We were glad to see a good group there, most of them we knew very well.

Shortly  after we arrived, a nice lady approached me and said she and her husband had met us some years ago.  I did not recognize her at first, but when she said they were Lynn and Steve and had bought a place in Buttonwood, FL, I knew exactly who they were!!  I remembered meeting them at TT Chesapeake Bay and we had a lot of fun together playing Pickleball, Hand and Foot, Euchre and who knows what else.

We looked forward to playing around with them again.  Unfortunately, they were planning to leave TT Orlando on Saturday morning to head home.  To solve the dilemma  we invited them over for drinks and conversation later on Friday.  It really was fun getting reacquainted with Lynne and Steve! 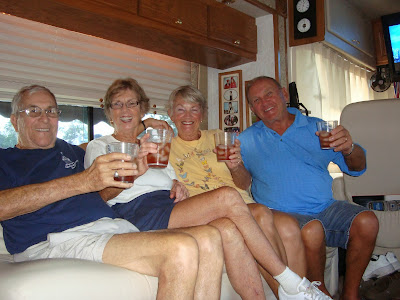 We are looking forward to getting together with them again soon because they said Buttonwood is only 20 miles from TT Peace River in Wachula!

Sidebar:  I thought we met them at TT Chesapeake Bay in 2008, but Steve said we had met in the at TT Soledad Canyon in Acton, CA.  In fact, he said I had "pickled" him with a pickle pin.