A little background. With a lot of new Pickleball players around, Ken has been ordering and selling Pickleball Paddles made by Spike, a friend of ours out in Arizona. 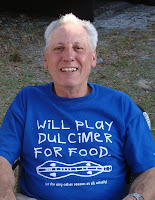 One day, the trim on one of Jessie’s paddles pulled away from the paddle itself. She called Ken to see if he could glue the trim back in place. Ken said, “Well, I guess so. I’ve got some Gorilla Glue over here.” Jessie and Steve showed up on our door step. “Why, that’s not one of MY paddles,” Ken stated. “I know,” said Jessie, “but, I thought since you make paddles, maybe you would not mind gluing mine for me.” “I don’t MAKE the paddles, I just sell them,” Ken told them, “but, I’ll try to glue it for you.”

He got out the Gorilla Glue and they began to glue the trim back in place. A characteristic about Gorilla Glue is that in order for it to work, the area has to be wet. So Ken wet the area thoroughly and they applied the glue under the trim and used rubber bands to hold it in place until the glue dried.

Steve told the story later at Sally and Stan’s Happy Hour. After leaving us, he had stopped by the restroom. He felt something a little sticky on his fingers, so guess what?? He washed his hands!!! The Gorilla Glue went to work!!! Steve’s fingers stuck to everything!! He said, after using the toilet, he could NOT get rid of the toilet paper!!! He tried everything, but it was STUCK!! I can just see him now!!! What a laugh we all got out of that!!!

Oh, that is so funny. It probably wasn't so funny to him at the time. I like his shirt!
Krystal

That was a great story! And Faye, I am going to try those cream puffs. I'm sure they won't be nearly as good as yours though. They looked good enough to take right off my screen and eat!!! Happy travels.
Betty