Friday, Dec. 17 – Wednesday, Dec. 22 – Rain, rain, and more rain. It has rained every day that we have been here. Mark and Chris said it had been raining before we arrived!! And there is another storm coming!! All around us neighborhoods are flooded; roads and houses are being washed away. And we have pretty much been hibernating!!

But, a few of us did brave the raindrops to do a little line dancing in the mornings. We took a moment for a picture. 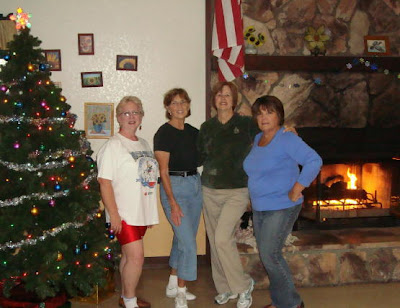 Coming out of the lodge after dancing, I took a few pictures of results of the rain. I had to remove my shoes and put on my Crocks to wade to the car! 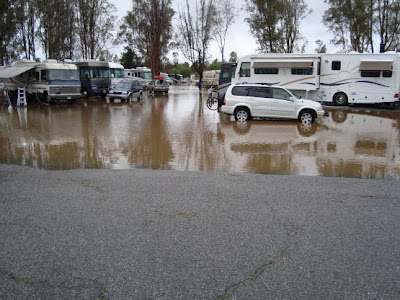 Several of the canals that run through the preserve overflowed their banks like the one shown here along the tree line. 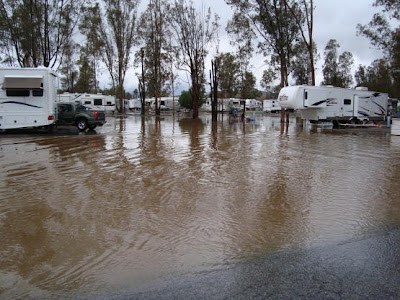 Cars driving through one of the main roads that was flooded. 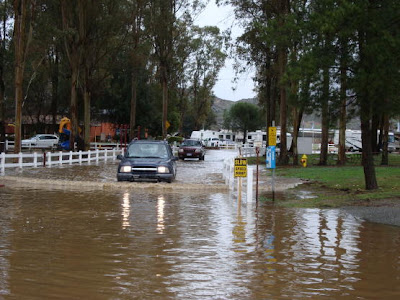 Our rig when I got home. It doesn’t look like the water is about four inches deep. 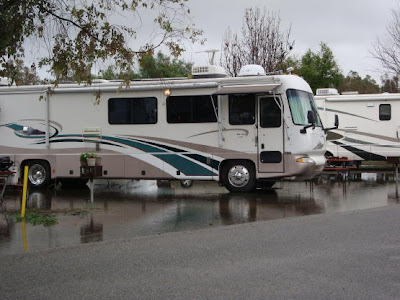 Some of the roads outside the preserve are closed due to high water. Ken said I should have gotten pictures of the two cars in the ditch just outside the entrance gate!!

The rangers have put out notice of Voluntary Evacuation because of the pending storm. A few people left, but most stayed. We decided not to move.

Tonight is our last night at TT Wilderness. Tomorrow we go to TT Pio Pico near Chula Vista where Ken’s son Richard lives. We will be spending Christmas with them this year.
Posted by Highway Runner at 5:00 PM