HAROLD AND MARION, THE NEWLY WEDS!!

We posted an article in our Blog last June that we had seen Harold at TT Verde Valley. We learned that his former wife, Althea, had died in February. In June we met Marion, a friend and neighbor to Althea and Harold in their home park in Mesa.
It seems that Marion has become more than a friend to Harold and they are now much more than neighbors!! In fact, we received an e-mail that they were married at the end of 2011. Later, in January they had another wedding ceremony that their families could attend.
Marion and Harold exchange vows. 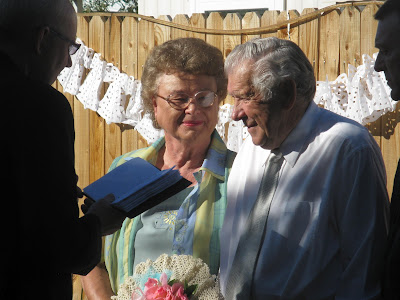 And the traditional eating of the cake! HA HA 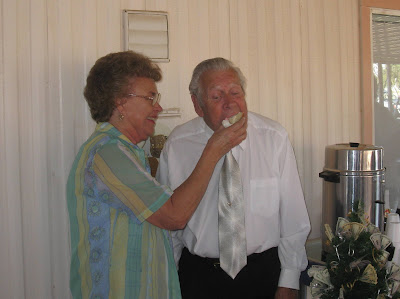 Marion is a really nice lady. We are very happy for them both!! They seem really, really happy together!!
CONGRATULATIONS YOU TWO!!!
Posted by Highway Runner at 12:33 AM