A NEW DEFIBRILLATOR FOR KEN, THE BIONIC MAN!!

Apr 16 - Background:  In the middle of February, Ken was playing an afternoon game of Pickleball.  When he came off the court he said he did not feel like playing anymore.  He was exhausted!  He did not feel like playing for the next few days.  This was not like Ken at all!!  We decided he should see a Cardiologist in the area.  Our friends Pam and Joe who live nearby recommended Desert Cardiology Center at Eisenhower Medical Center.

We were able to get a new patient appointment with Dr. Frutkin in about a week and a half.  That was too long to wait, so we went to the Urgent Care, just in case.   After many tests they said Ken had not had a heart attack, but they sent him to the Eisenhower Emergency Room.

After many more tests, the Emergency Room said Ken had not had a heart attack, but they wanted to keep him overnight in Observation.  The next day Ken was released from the hospital with the recommendation he follow up with his Cardiologist.  We called Dr. Frutkin and were able to change the appointment to the following Tuesday, that was February 19.

Dr. Frutkin said the above tests showed what we already knew -- Ken had a weak heart.  He has two stents from 1999 and 2001.  In 2004 we discovered that the artery below the first stent was 100% blocked but secondary veins had taken over.  Doctors determined it would be best not to operate but to treat the problem with medication.

Dr. Frutkin ordered some additional tests and when Ken saw him again, he had a surprise for us!  He said all of the test results along with Ken's complaints of exhaustion indicated he might be a candidate for a Defibrillator or Pacemaker!!  That's the first we have heard that!!   An appointment was made with Dr. Rubin, the Electrophysiologist in the same office who would make the final determination and perform the surgery. 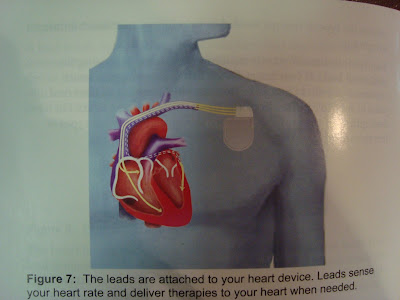 Surgery was a big success and Ken is at home recuperating.  He needs to take it easy for two weeks and no tennis, golf or Pickleball for two months!!  The new Defibrillator will help his heart pump stronger and make him feel much more energetic!!  That will be WONDERFUL!!

SIDEBAR:  Due to Ken's unexpected surgery, we have had to change our Schedule.  Check it out.