Wed, Jul 08 - Back in mid-June I posted an article in our Blog giving you a "heads up" that I was going to have total Right Hip Replacement Surgery.

My check-in time was 11:00 AM at St. Mary's Hospital.  We were at the check-in desk right on time.  At about 11:15 AM the nursing staff came and got me and took me to pre-op for preparation for my surgery, scheduled for 1:00 PM.  They would not let Ken go with me.  They sent him upstairs to wait in the Surgery Waiting Room.  Surgery was expected to last about two hours and I would be back in Recovery at about 3:00 PM.

A few minutes later, I was happy -- I was out of it!!  I told them I did not want to know a thing!!  But Ken had another story.  In the Surgery Waiting Room he told the desk that would be going home to wait since it was only a few miles away.  He left his phone number where he could be reached if necessary.  Around 3:00 PM he drove back to the hospital to wait for me.  The Waiting Room staff they gave him a buzzer so they could let him know when I went to my room.

A little while Ken got a buzz.  When Ken reported to the desk, they said they had not buzzed him; they didn't know who had.  Their Color Board showing the status of each patient indicated that I was still in surgery.  They told Ken they didn't know where I was!  I was supposed to be in Recovery.  Upon further investigation they discovered that Dr. Dobzyniak had an emergency surgery and my surgery was postponed until 3:00 PM.  So Ken still had another long wait; like starting all over.  He decided to go to his son Mike and Diane's place to relax.  Later they all went out to dinner and then back to the hospital to wait for me.  They were sent up to my room but - where was Faye??  There was no Faye, not even a bed!!  They waited and waited.  Finally, I arrived in my room sometime after 7:00 PM.  They learned that my blood pressure had dropped during surgery so I was kept in Recovery longer than expected.

I didn't even know any of this was going on!!  Poor Ken had been waiting for eight hours for me!!  I am so glad he had Mike and Diane waiting with him!

The next morning I awoke feeling great (for having just had surgery).  As I looked up, an Angle stuck her smiling face inside my door!!  My daughter Stasia had driven almost 200 miles from North Carolina to be with her mother after surgery!!!   What a great surprise!!  We spent a delightful day together.  I think I must have been high as a kite because I was feeling no pain!!!  And, how could I have failed to get a picture of Stasia while she was visiting me??

During that time the Therapists came in to work with me!  (The only pictures I got!!) 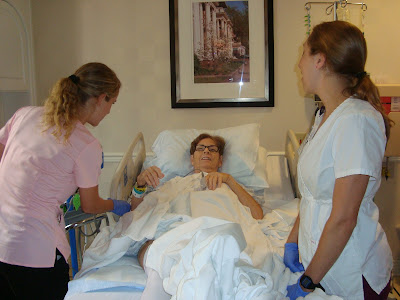 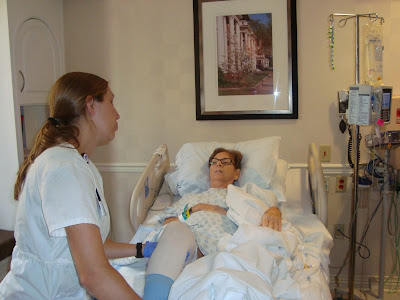 Stasia spent the entire day with me and when she left, Ken and his daughter Stacey came to stay with me into the evening. 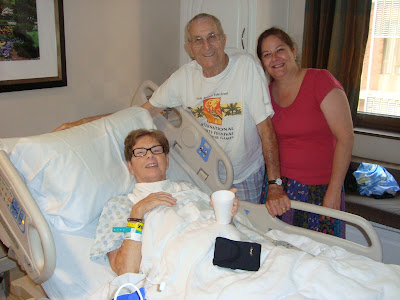 My surgeon Dr. Dobzyniak came in the next morning and explained that my hip had been in really bad condition and I also had bone spurs that made it even worse.  No wonder I was in such pain.  But, the Hip surgery went great! Thanks Dr. D!!

I was released early Saturday morning, July 11.  WITHOUT PAIN!!

BUT, the story does not end there!!  The trauma is just beginning!!!

Posted by Highway Runner at 8:22 PM

Faye, so glad you found some great doctores to get you back on your feet.And it's quite obvious what a wonderful family you have..... Was at dinner the other night with Nathan and Krystal, and Buddy and Diane and we all commented that we had not heard from you in a long time. I guess we know why!! Please know that Rich and I will keep you in our prayers every day that your back surgery goes well and that your recovery is quick.