May 19 - This is unbelievable!  But it actually happened!!

On Saturday we played Pickleball at TT Verde Valley.  When we were finished, Ken announced that he was going home.  I had planned to do some water aerobics at about 11 o'clock so I stayed.

Sunday morning when we went to play Pickleball, we did not have our Pickleball bag at home.  I thought Ken brought the bag home yesterday when he left.  He thought I would bring the bag home.  Neither of us did!!

Oh, well.  When we get to the courts, we'll pick it up.  We knew exactly where we left it!  But, the bag was gone!!  We checked with all the players and no one had taken it.  We check with maintenance personnel who were nearby.  They called the Ranger.  No one had turned it in!!  We waited for someone to bring it back to the courts, but that didn't happen!  We have checked with the Ranger again, the store, the office, and maintenance several times.  No one has turned it in!

We had a number of our Calling Cards in a pocket on the bag, so we hoped someone would call us and let us know they have our bag.  But no calls! It is apparent that someone took the bag with the intention of keeping it!

The bag had three Pickleball paddles in it.

Ken's old purple Champion (went well with his purple hat).  The paddle had a label with his name on it. 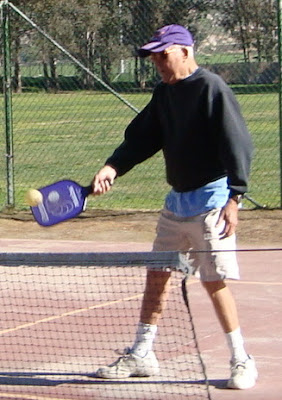 My well worn silver paddle made by Spike.  My paddle had my address label stuck on the face of it. 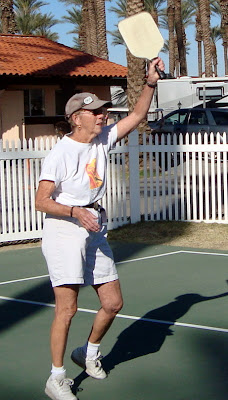 And most upsetting of all, it contained Ken's relatively new Yellow Champion!  His favorite paddle!  This paddle also had a label with Ken's name on it. 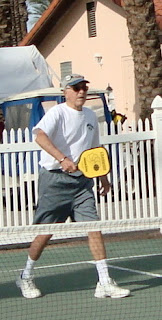 So, if you see anyone playing with paddles that look like these, maybe you could take note and try to determine if they could be our paddles.   Perhaps there would be some indication that the label had been removed.  If you do happen to find the paddles, please send us an e-mail to let us know.  Thank you so much for keeping your eyes peeled.

Posted by Highway Runner at 8:09 PM