Apr 30 - We stopped at the Flying J Travel Plaza as we were leaving Yuma and heading for Apache Junction near Phoenix.  We have only been to Flying J one time just after they merged with Pilot.  At that time, they gave us the Pilot Driver Payback card and said we should use it.  Problem was, it did not give you a discount on your fuel -- you just accumulated points!  We did not like that, so we never went back.
Today, however, I gave the cashier all my Pilot and Flying J cards along with my charge card.  I told her I did not understand about the Driver Payback points!!  She explained:
When Flying J first merged with Pilot, they didn't know how things would work.  Now that things are straightened out, The Pilot Driver Payback is for commercial drivers.  RVer's do not use this card! 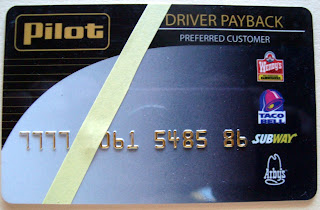 RVer's use this Flying J R.V. Real Value Member card.  We also had one of these and saved $$ on our diesel. 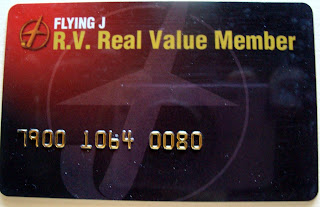 The Yuma Flying J had two RV fill-up lanes right beside the truck lanes.  We used one of the RV lanes but Ken said it had a small nosel and took a long time to fill up.  I forgot to ask the cashier is we could use the truck lanes for the same RV cost.
Posted by Highway Runner at 2:01 AM