Monday, Aug 12 - Our next stop was in Amarillo, TX.  Sue and Jack (of the 10-Pak) passed through Amarillo in June and after reading Sue’s Letter From The Road about the Cadillac Ranch, I told Ken WE had to stop at the Cadillac Ranch on our way into Amarillo. 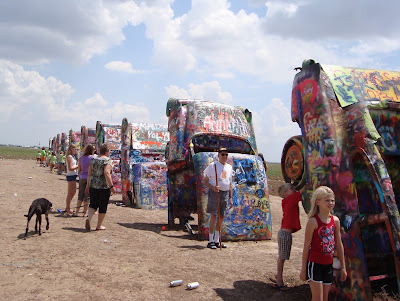 I’ll let Sue tell you all about it in this excerpt from her Letter From The Road:

Standing along Route 66 west of Amarillo, Cadillac Ranch was invented and built by a group of art-hippies imported from San Francisco. Their silent partner was Amarillo billionaire Stanley Marsh 3. He wanted a piece of public art that would baffle the locals, and the hippies came up with a tribute to the evolution of the Cadillac tail fin. Ten Caddies were driven into one of Stanley Marsh's fields, then half-buried, nose-down, in the dirt. They faced west in a line, their tail fins held high for all to see.

That was in 1974. People would stop along the highway, walk out to view the cars -- then, sadly, deface them or rip off pieces as souvenirs. : ( Decades have passed. The Cadillacs have now been in the ground as art longer than they were on the road as cars. They are stripped to their battered frames, splattered in paint, barely recognizable as automobiles.

Yet Cadillac Ranch is now more popular than ever. It's become a ritual site for those who travel The Mother Road.  Everyone now brings cans of spray paint to add to the art work!

We parked the RV on the side of the access road just off of I-40 and walked over to take a closer look.  We, of course, did not have any spray paint with us, but a nice young lady had leftover paint in her spray can and asked us if we would like to have it.  Of course we would! 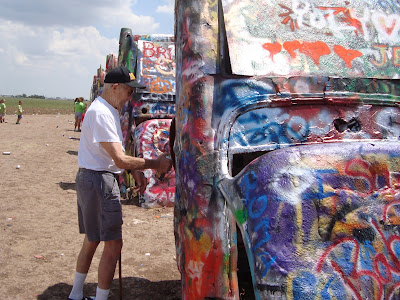 Later we gave our spray can of paint to this couple passing by. 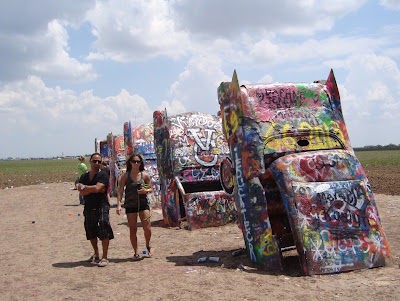 They offered to take our picture with Ken's art work - VCU for his son Mike's college basketball team! 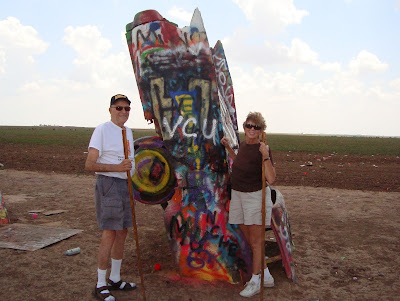 It was a lot of fun spending a moment at The Cadillac Ranch, just off of I-40 in Amarillo, TX!

Another place mentioned by Sue in her newsletter was The Big Texan, "Home of the Free 72 Oz. Steak"  in Amarillo!!  That is where we went for dinner! 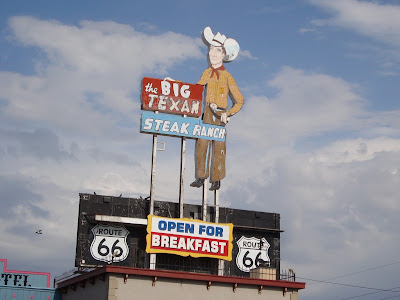 Ken standing on the porch before we went in. 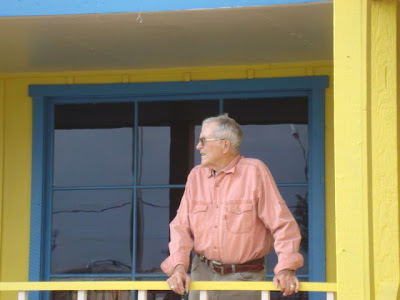 The Big Texan is quite a BIG place! 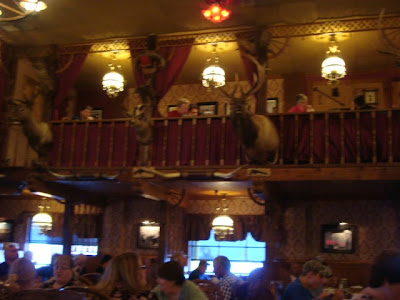 Here we are enjoying our meal. 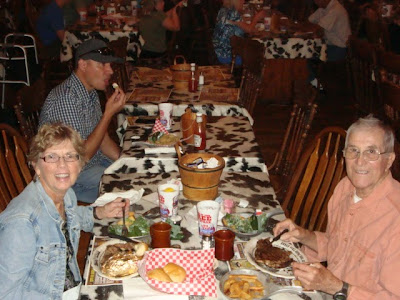 Not a 72 Oz. Steak but this rib eye was plenty big for me!  UUMMMMMM!! 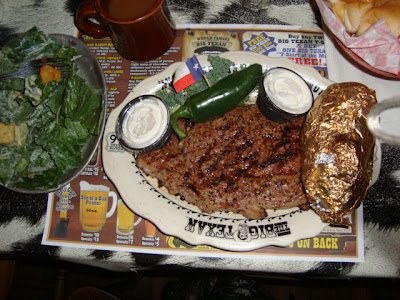 The 72 Oz. Steak is only Free to those who can eat the entire steak with sides within 60 minutes!  Our table was next to the stage where contestants attempt the almost impossible feat!  I was disappointed because no one took the challenge while we were there.

You can't tell it here, but the table and chairs are up on a stage with the 60 minute count-down in red lights in the background. 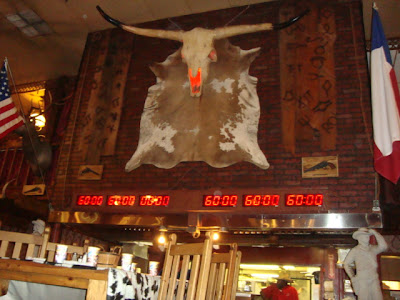 We had a delicious, delightful time at The Big Texan!  If you are ever in Amarillo, you must give it a try.

Posted by Highway Runner at 9:57 PM