Tuesday and Wednesday, Aug 20 and 21 - Stasia lives only about 60 miles from Barry.  However, there is no place in Goldsboro to stay with the RV.  So, we left Tuesday morning and headed for a Passport America campground in Wilson, NC, about 30 miles from Goldsboro.  Stasia and her husband Gene came over to our campground after work and we went to Chili's for dinner.  How did I forget to take pictures!!???!!  When I remembered, as we were leaving, no one was in the mode!!

On Wednesday morning, I joined Stasia and participated in her Senior Games Day!!  I played Shuffle Board and Corn Hole but only did average in each!!  After all, I'm a Pickleball Player!!  HA HA!!

Stasia explaining Shuffle Board rules to a couple of participants! 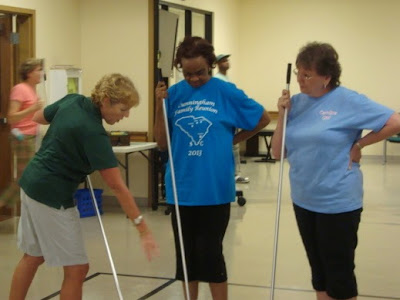 In addition to the Shuffle Board and Corn Hole, they had Wi Bowling and Table Tennis and maybe other games I have forgotten!  After the games, box lunches were served to all participants. 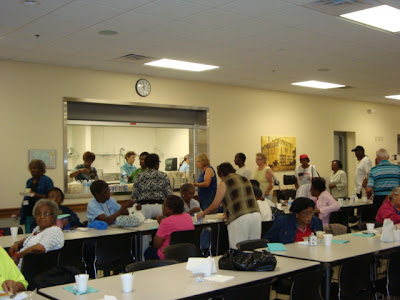 After the games we went to the nearby Senior House that was recently opened on the grounds of the Goldsboro Parks and Recreation where Stasia is in charge of the Senior Program.  The Senior House is open for seniors to come by for luncheons, card games, library, TV, etc., etc., etc.!!

Here is Stasia with the "Hostess" of the House. 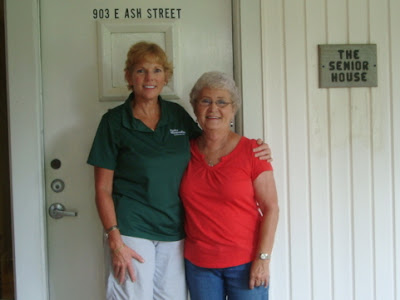 Gene and Stasia recently bought a really neat sports car - Mazda something or other.  Since it was raining, again (doesn't rain in Southern California!!), so I took their picture in the garage!!  Stasia with her beauty queen wave!! 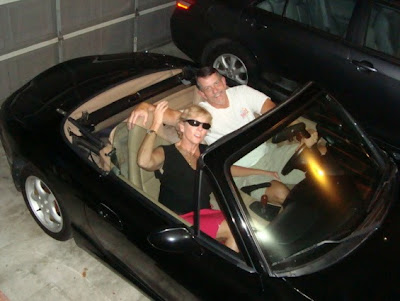 A member of the family -- Labradoodle Jake!! 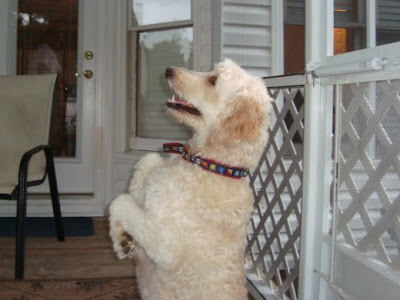 After dinner by Chef Gene, we finally posed for the family legs portrait! 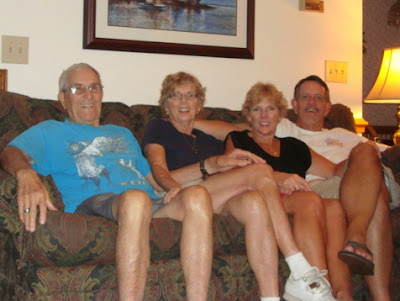 Oh, No!!  The fun is over and the problems begin.  Knew it was too good to be true that we had made it all the way across country with no RV problems!!

As we were leaving our campground on Thursday morning, Aug 22, we discovered our driver's side tail lights did not work.  In fact, we discovered that the new tail pipe extension had worked loose and the heat from the exhaust had melted the tail light assembly and wiring!!!  We decided to take a chance and finish our trip to TT Chesapeake Bay.  We would take care of the problem when we were back home!!!
Posted by Highway Runner at 9:59 PM