EASTER WITH FRIENDS AT TORREY OAKS

April 04 – We had been invited to join our friends for Ester Dinner at Torrey Oaks. The club was preparing ham and scalloped potatoes, attendees brought side dishes. I prepared Sherried Sweet Potatoes, using a recipe I had gotten from Toni (and Peter) a few years ago when we were out west.

Dinner, as usual, was delicious. There was so much variety – so many choices among the side dishes. Here we are enjoying dinner.
Around the table: Faye, Ken, Joe, Cis, Ray, Jan, Sally and Stan. 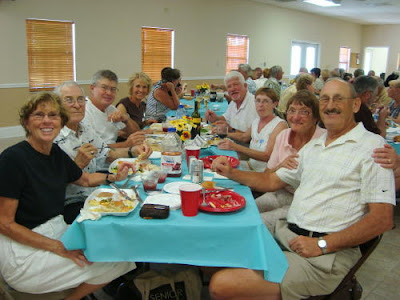 Cis and Joe are leaving to go back to Pennsylvania on Tuesday. We had only played Euchre a couple of times with them during the season, so we invited ourselves to their place for a game of Euchre before they leave. We played two games. Cis and I were ahead in both games, but the guys won!! Congratulations guys!!

Sally was running the weekly Card Bingo Games at the Rec Center. After Euchre the four of us went over to join the group for the games. We were lucky tonight!! Ken and I each won 90 Cents!!

It was a fun Easter Sunday!!
Posted by Highway Runner at 10:36 PM