August 06 - We arrived at Camping World at about 10 PM on Thursday. They did have electrical hook-up as Mitch had said. We had never noticed that some Camping Worlds have hook-ups! 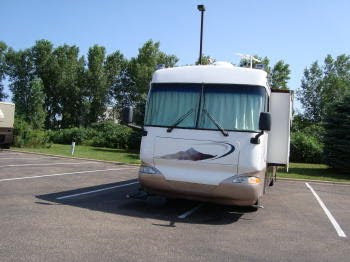 On Friday morning, Camping World technicians confirmed the worse -- the refrigerator cooling unit was bad and had to be replaced, or we could buy a new refrigerator. The cost of the second option was prohibitive!!

After we decided to have the cooling unit replaced, we were told they were made to order by Norcold and it would be something like three weeks before it could installed!! What!!???!! Other arrangements had to be made!! Since we were going to be in NW Washington for several weeks, we asked if the unit could be sent to Camping World in Burlington, WA and be installed there. We spent all day Friday with the staff at Camping World working out the details of such a plan.

So now we are living out of coolers until we can get the new cooling unit!! UGGH!!

Posted by Highway Runner at 2:27 PM