MAKING THE ACQUANTIANCE OF JOE

August 12 – This is a most unusual happenstance. We were sitting outside our rig at the Omak Fairgounds campground, enjoying a glass of red wine. A gentlemen riding a bike came over. He wanted to know about staying over night. We showed him where the office and suggested he ask them, but Ken felt it would not be a problem if he set up his tent in a private part of the campground.

He introduced himself as Joe. He said he was riding across the country and was headed for the Okanogan City Park where he could stay free for the night, but he saw the lush grass and shade trees of the Fairgound campground and decided to stay here if he could. 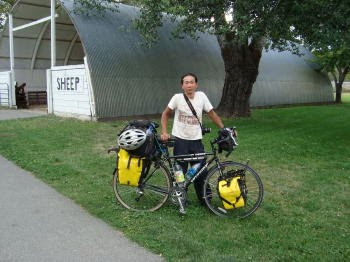 We asked where he was heading – San Francisco. We asked where he had started – Yorktown, VA of all places!! (Small World.) When he gets to San Francisco, he plans to fly back home to Thailand! We asked how he happened to begin his trip in Yorktown. He is a member of an international cycling club; they have a number of planned trips. He chose the Cross America trip beginning in Yorktown. It has taken him about three months to reach Washington. 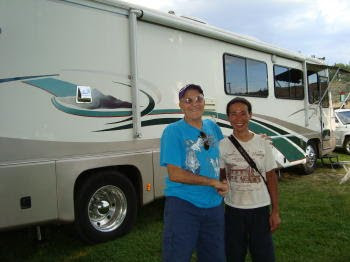 We wish him all the luck in the world!
Posted by Highway Runner at 2:09 AM